Celebrating 25 years of giving shoebox gifts to children in need 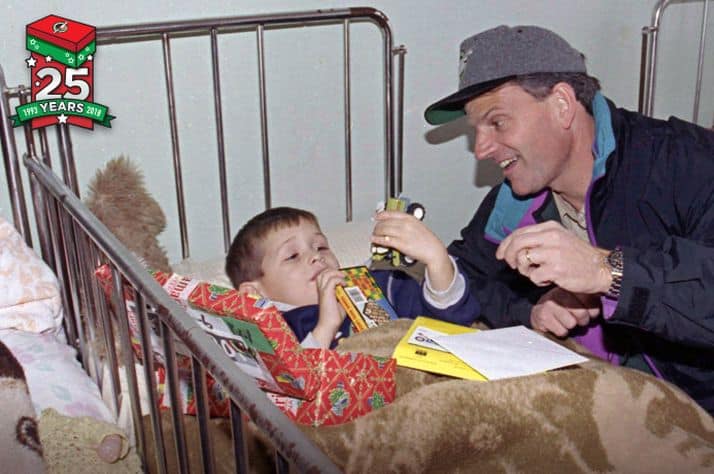 Operation Christmas Child, a project of Samaritan's Purse, has delivered 157 million shoeboxes to boys and girls around the world. We praise God for so many children whose lives have been transformed because of a simple gift.

Since 1993, Samaritan’s Purse has partnered with local churches around the world to deliver 157 million Operation Christmas Child shoebox gifts to children in need in 160 countries. Each one—packed full of fun toys, school supplies, and hygiene items by a family or individual—is sent with prayer that the child who receives it will experience God’s love through their simple gifts.

These shoebox gifts are an opportunity to share the Gospel and “declare His glory among the nations, His wonders among all peoples” (Psalm 96:3).

“It Changed My Life”

One Christmas, an 8-year-old girl named Felisha on the island of Trinidad received a shoebox gift packed with a doll, stationery, colorful socks, and a teddy bear.

“I didn’t know anything about Jesus because I had never been to church before, so I was really curious,” Felicia said. 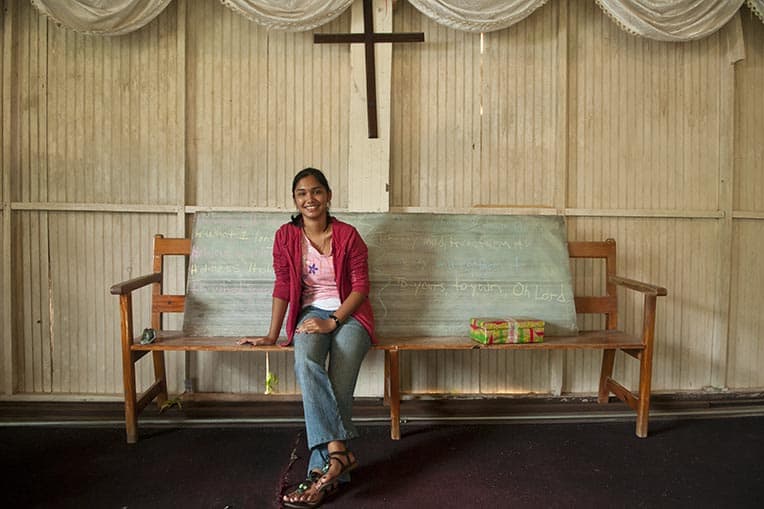 Felicia (pictured at age 17, now 25) and her entire family accepted Jesus Christ and worked to plant a church in their town.

As a result of her shoebox gift, she began attending church in a neighboring village with a friend. When her sister received a shoebox gift a following year, her father said, “I was amazed at the love I saw in those boxes.”

Since then, each member of their family has accepted Christ as their personal Savior. Together, they worked to plant a church in their hometown—aptly named Hardbargain.

Felisha knows that her shoebox was more than a collection of toys and useful items: “It made me learn about God, it helped start this church, and it changed my life.”

Felisha is among countless children whose lives have been changed forever through the power of God’s love, demonstrated through simple gifts.

During the summer of 1993, Samaritan’s Purse President Franklin Graham received a call from a man in England asking his help on behalf of children in Bosnia who were suffering because of a brutal civil war. The Englishman specifically asked for shoeboxes filled with gifts to deliver to these little ones at Christmas. Samaritan’s Purse was already working in Bosnia, and Franklin had been there three times in the previous year, so he was eager to help.

Christmas, however, seemed a long way off, so he put this request aside.

Not long before Thanksgiving, he received a call back from the man in England. Quickly reminded of his promise, Franklin assured him he was working on it. 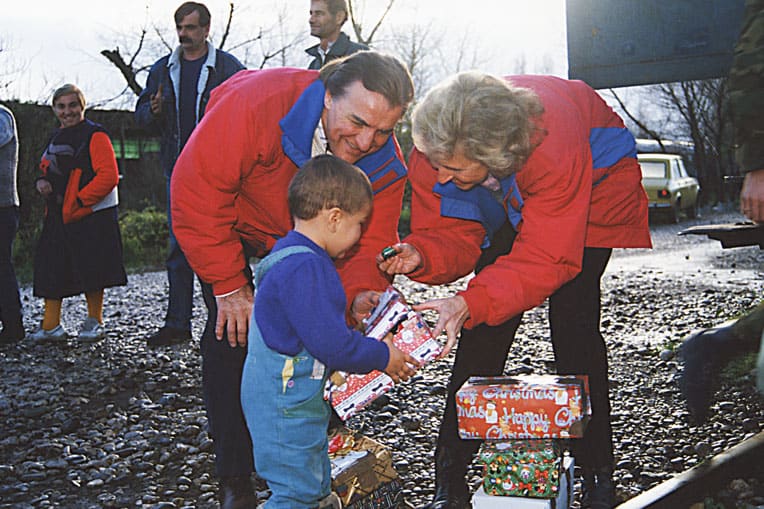 Pastor Ross and Carol Rhoads hand out shoebox gifts to children in Bosnia in 1993.

Franklin then called his friend, the late Ross Rhoads, who was serving as senior pastor of Calvary Church in Charlotte, North Carolina. He asked if Ross and his wife Carol could fill a shoebox with items for a child, show it to their congregation, and ask them to do the same—in order to share the true meaning of Christmas with the children of Bosnia.

Ross and Carol were eager to assist, and the response was overwhelming. Shortly after Thanksgiving, Ross called Franklin to report that 11,000 shoebox gifts were now lining the hallways of his church!

Combining these gifts with more from our Canadian office, Samaritan’s Purse sent 28,000 shoebox gifts to children in Bosnia that Christmas. Ross and Carol Rhoads traveled to the war-torn nation to help us distribute them.

Today, through the countless prayers of many and the service of thousands of volunteers around the globe, the project has grown to include eight shoebox-packing countries in addition to the 160 that have received them.

“When I agreed to send shoebox gifts to Bosnia in 1993, I never dreamed it would grow into the project it is today,” Franklin said. “We praise God for allowing us to touch the lives of so many children and their families with the Gospel of Jesus Christ over the past 25 years.”

Through gift-filled shoeboxes, we are bringing good news and great joy to children in Africa, Asia, Europe, Central America, and South America. Boys and girls are coming to Christ and leading their families to follow Him, too. Churches are being planted and new generations of evangelists are rising up through The Greatest Journey, our discipleship program just for shoebox recipients.

Help us celebrate our 25th year of ministry by packing a shoebox online!