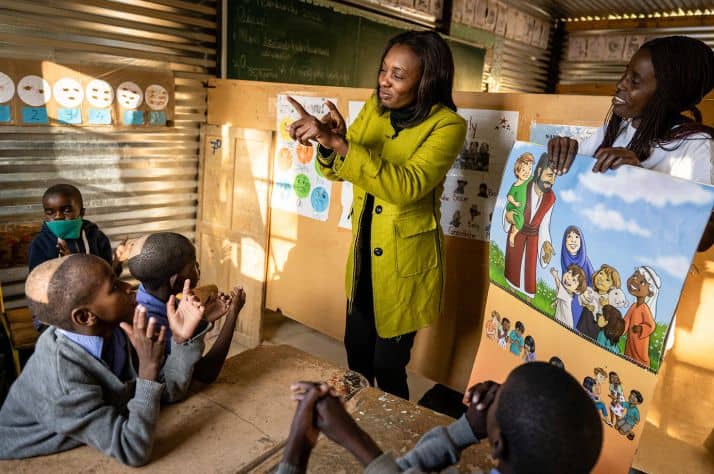 Operation Christmas Child opens doors to the Gospel among children who had never heard about God’s love for them.

The classroom was quiet as boys and girls opened their Operation Christmas Child shoeboxes. There were no squeals of excitement or chattering, no shouting for friends to come and look at the fun gifts inside their shoebox.

Yet, their smiles were so big and bright that verbal expressions weren’t needed to reveal the joy overflowing from their hearts.

“It moved my soul seeing them very happy. It’s like I got a gift for myself,” said Klaudia, who teaches the group of deaf children in Opuwo, Namibia.

The Operation Christmas Child outreach event marked the first time that most of the children had ever received a present. Many of the boys and girls belong to the Himba ethnic group and come from families of livestock farmers who live in small mud huts in isolated villages. 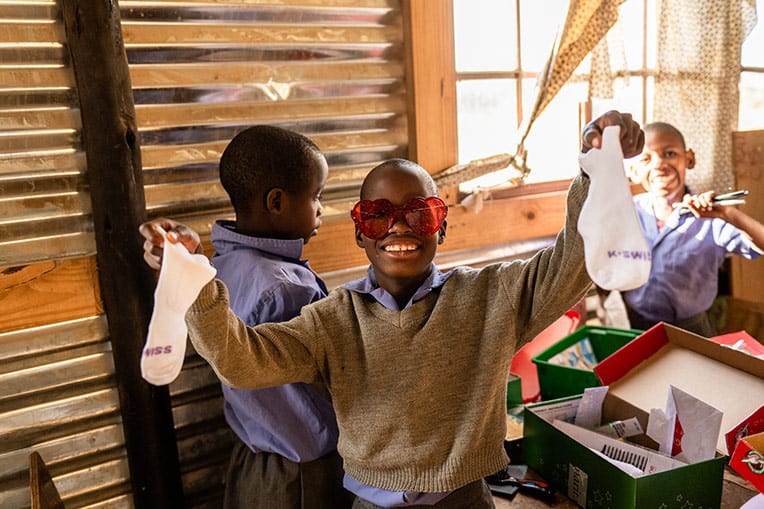 Sunglasses and socks were some of the children’s favorite gifts.

Klaudia heard about the shoebox outreach events through Pastor Rizera and his regional team, who began reaching the Himba with the Gospel through Operation Christmas Child and The Greatest Journey about six years ago. Their efforts have resulted in several churches being started among the Himba, who previously had a longstanding tradition of worshipping ancestors and spirits.

Klaudia was excited for her students to participate in Operation Christmas Child because she wanted them to learn about the Gospel and to know that they are precious in God’s sight.

“They felt loved today,” she said. “They will be smiling the whole week.”

Klaudia’s class is the only option for deaf children in Opuwo to receive an education unless they travel nearly 10 hours to the capital—which isn’t an option for these impoverished families. 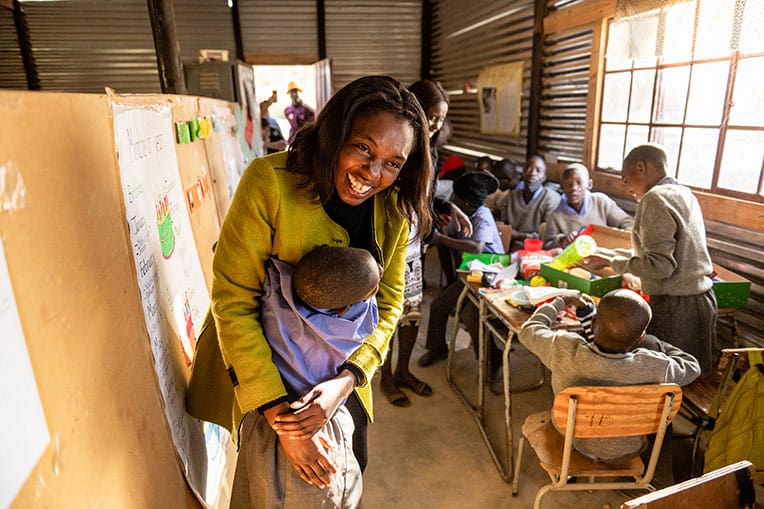 The children were grateful to Klaudia for helping to bring Operation Christmas Child to their school.

None of the boys and girls in Klaudia’s class had previously attended school or had an opportunity to learn sign language. Some students come to her as teenagers having spent their lives feeling alone because they were unable to communicate with family and friends.

Klaudia isn’t deaf and she doesn’t have friends or family who are deaf. She had never thought about working with deaf children, but when God burdened her heart to reach out to this marginalized group, she knew she had to obey. Klaudia began learning sign language and pursing a teaching degree.

“God called me to this,” she said. “It’s a pure love from my heart. The children make me smile, and they are my everything.” 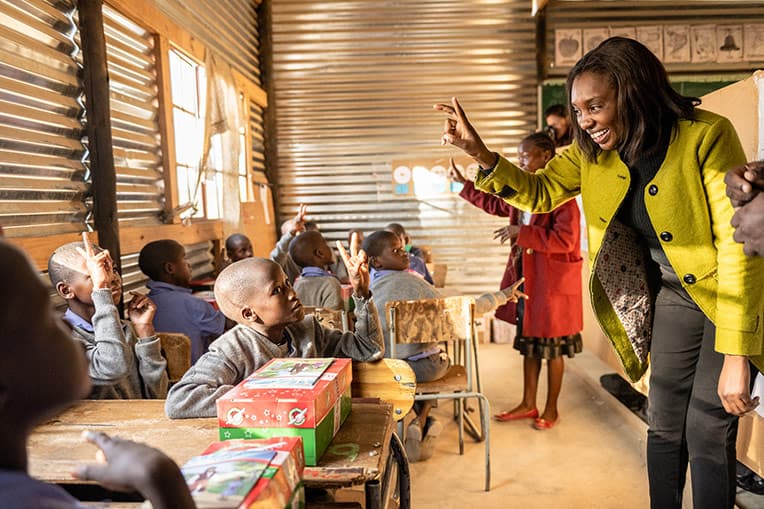 God is using Klaudia to show His love to children who have been abused and treated as outcasts. Deaf children in the Himba culture are often viewed as mentally disabled and unable to learn and function like hearing children. Sometimes they are seen as cursed or blamed for another’s wrongdoing even when they are not at fault.

“People don’t see that these deaf kids are like other kids,” Klaudia said. “We are all human; there’s no difference.”

As much as Klaudia wants her students to learn the fundamentals of reading and writing, she is more concerned about their spiritual condition. She faithfully prays that her students will come to trust God and His love for them.

“That started here, today, with the Operation Christmas Child shoeboxes,” she said.

Kavari is just one of many students who received a gift-filled shoebox earlier this year. Before joining Klaudia’s class, he helped to tend his family’s livestock. He had never been to school and had no hope of ever being able to do so. 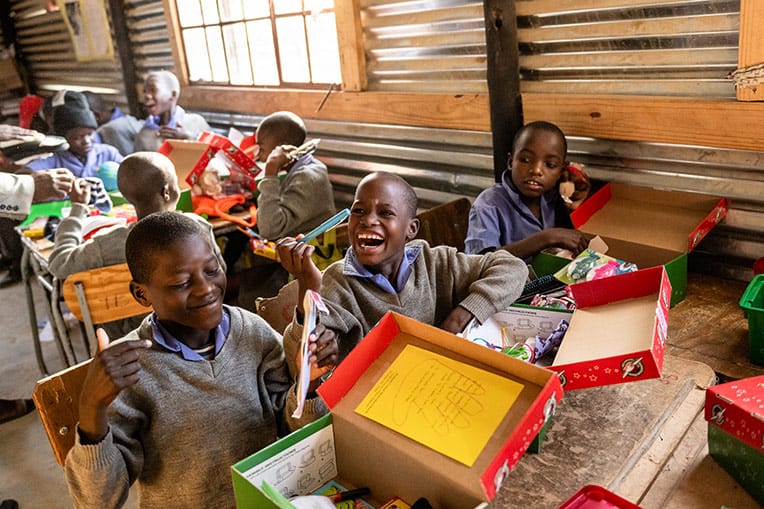 Most students had never received a present.

Kavari had never met another deaf person until he started taking classes. He never got invited to play with children in his village because he was deaf. “Sometimes they beat me and bullied me,” he said.

But things are different now that he’s in school. “I felt very happy and excited when I saw I’m not the only one who is deaf,” he said. “Now, I can read and write. Life is better because of school.”

Family and friends in Kavari’s village have also had a change of heart. They see that he is not only capable of learning, but is thriving in school. “My family smiles every time I take my school papers to show them,” Kavari said. 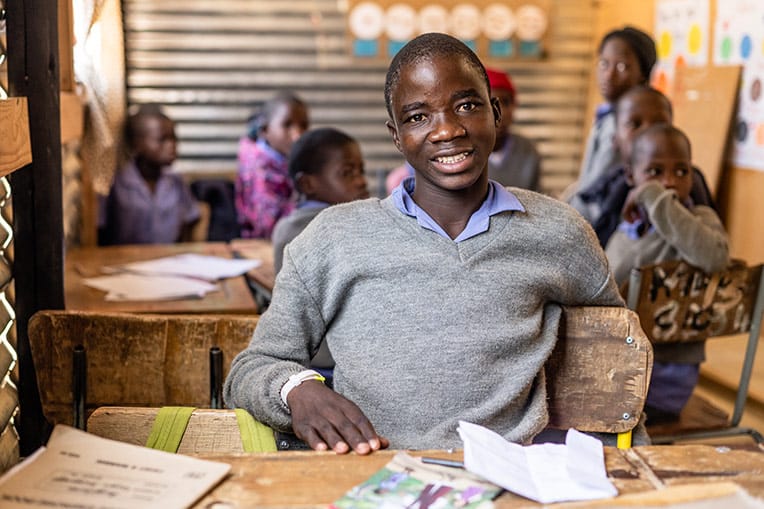 Kavari came to faith in Jesus through the outreach event.

Kavari was thrilled to see all the gifts packed inside of his Operation Christmas Child shoebox, especially the soccer ball. Yet, it wasn’t a toy that excited him the most—it was The Greatest Gift storybook. In addition to hearing the Gospel before they receive their shoebox gift, boys and girls also receive this booklet that shares 11 Scripture stories and invites children to follow Christ.

Just one day after the outreach event and Kavari was already eagerly sharing the stories in his book. “I’m so happy to get the booklet,” he said. “I learned about creation, how we should love one another, and how the kids in the Bible were excited to see God.” 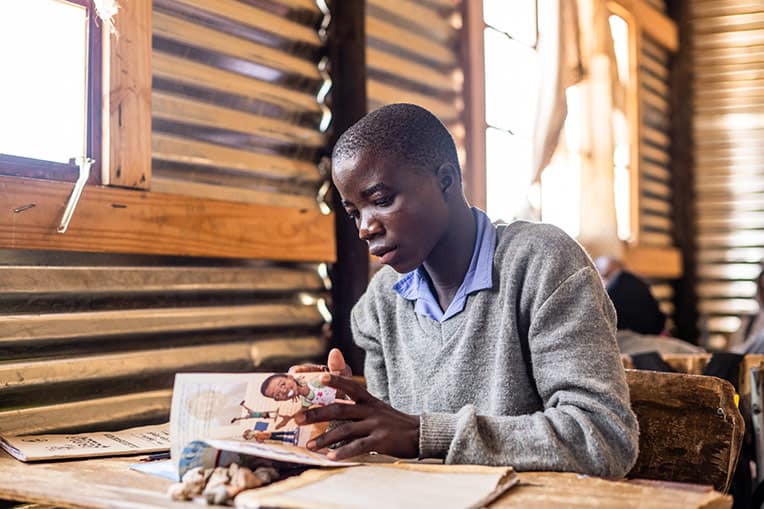 The stories in the booklet had quickly become more than stories to Kavari—he knew they were God’s truth and that they would change his life. “I decided to follow Jesus,” he said.

Kavari said he is excited about going to church with Klaudia and sharing his faith with others.

“I want others to accept Jesus into their life.”

Please pray for Klaudia, Kavari, and all of the students at the Opuwo school. Ask God to draw them closer to Him each day.

To learn more about how God is using Operation Christmas Child to change lives in Namibia, check out this Ends of the Earth story.

It’s not too late to send a shoebox gift to the ends of the earth! Learn how to pack a shoebox and bring it to one of 300 drop-off locations open through Nov. 14-20. Or, you can always Pack  Shoeboxes Online. 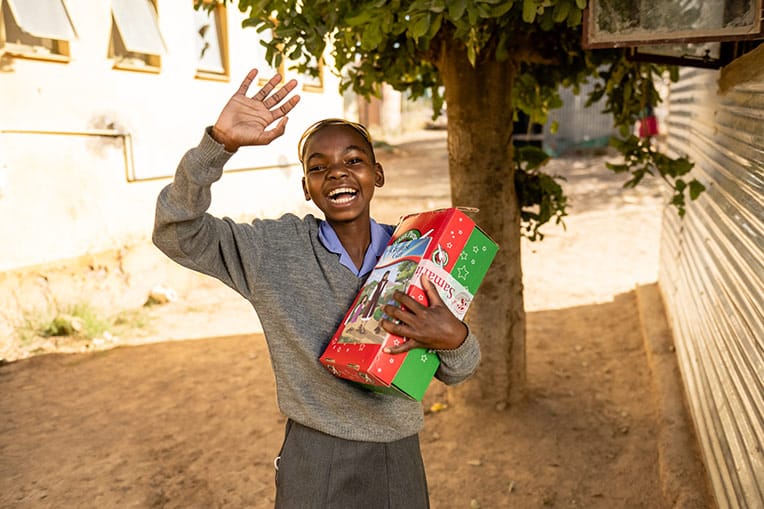 Please pray that God will continue working in the hearts of boys and girls in Namibia.