To serve and protect 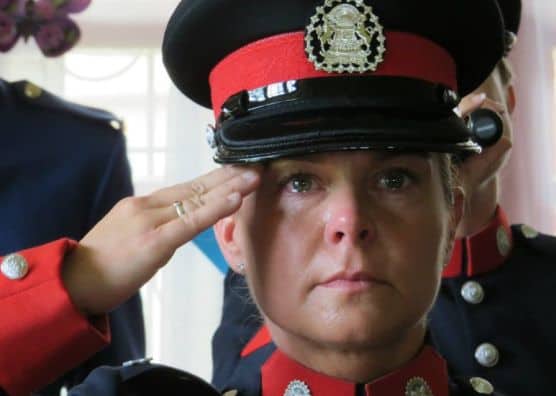 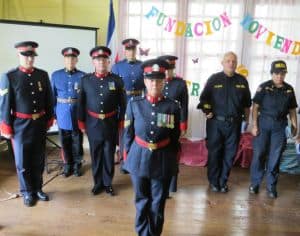 A team of seven police officers-five from Calgary and two from Edmonton-is partnering with Samaritan’s Purse Canada to work collaboratively with Costa Rican law enforcement officials to help strengthen community relations in their country.

The police officers are considering this a “working holiday.” They have raised all the funds necessary to cover the costs of the trip, and will be taking vacation time from their jobs to participate. Their many activities include distributing Operation Christmas Child shoeboxes to children.

It was at one such distribution that the officers felt compelled to commemorate the fallen RCMP. As 82 students, their parents, and teachers looked on respectfully, Constable Carla sang the Canadian national anthem and the uniformed policemen and women had a moment of silence. 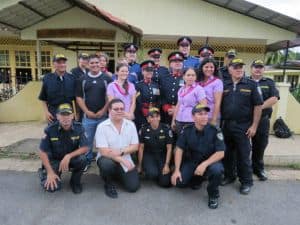 Police officers from Canada and Costa Rica stand together with the teachers and principal of a Costa Rican school where they distributed Operation Christmas Child shoeboxes.

A symbolic gift-filled shoebox was given to a girl named Carima (pictured left), the daughter of a Costa Rican police officer, to honor the fact that the slain RCMP officers were also fathers.

Jairo Rojas of Samaritan’s Purse Canada is leading the team and was present for the ceremony. “I cannot find words to describe how special, powerful, and emotional this distribution was,” he said.

Please join us in praying for the team, the people that they meet in Costa Rica, and the great work that they are doing.

Operation Christmas Child is a project of Samaritan's Purse.
Pack a Shoebox
How to Pack a Shoebox
What to Pack in a Shoebox
Shoebox Labels
Pack a Shoebox Online
About
Mission & History
The Journey of a Shoebox
To the Ends of the Earth
Evangelism & Discipleship
The Greatest Journey
Latest Stories
Videos
Media Resources
Frequently Asked Questions
Resources
Project Leaders
Family (& Children)
Students
Churches
Tips for Packing Parties
Year-Round Packing Ideas
View All Resources
Get Involved
Pack a Shoebox
Lead Your Church or Group
Volunteer
Become a Drop-off Location
Pray for Operation Christmas Child
Ways to Give
© Copyright 2023 Samaritan's Purse Canada. All rights reserved.