Shoebox Gifts Protected in the Storms 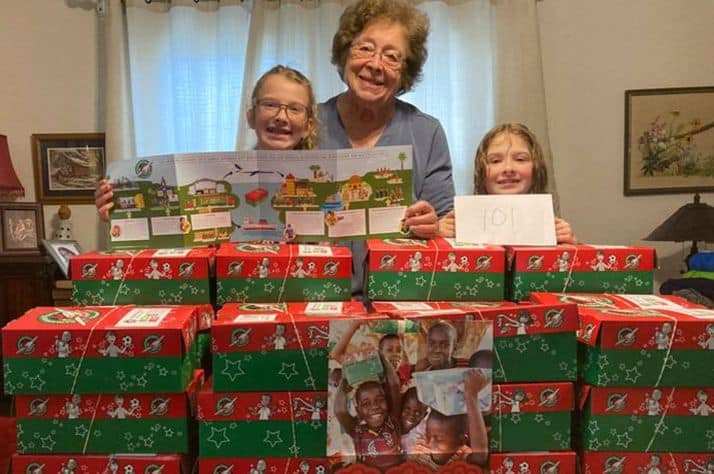 When Samaritan’s Purse helped a 92-year-old Louisiana resident clean up her yard after Hurricanes Laura and Delta, our team was surprised by the additional blessings they discovered.

When Hurricane Laura threatened Louisiana at the end of August, and again when Hurricane Delta came only a few weeks later, Lula Singletary and her daughter, Kathy Guidry, prayed for God’s protection as they evacuated their neighboring homes in Woodlawn. This community near the town of Jennings endured wind gusts of more than 165 mph, causing the women to fear how their houses would hold up.

But Lula, 92, and Kathy especially asked God to watch over the 829 Operation Christmas Child shoebox gifts they had stored in Lula’s garage. Each one had been carefully packed and prayed over in preparation for National Collection Week, the third week in November. 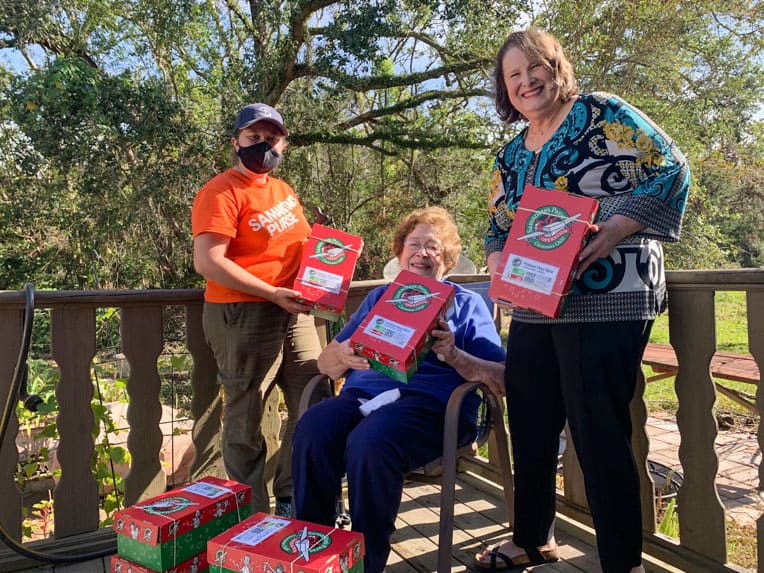 “Trees just missed hitting the house,” Lula said afterward as the two storms had fused into one combined, catastrophic event in her mind. “Trees fell right and left and in all directions, but nothing hit the house or the garage.”

One of her neighbors lost her whole roof, but Lula didn’t lose a shingle. All her shoeboxes stayed safe and dry. Her yard, however, was a maze of downed branches and tree trunks.

When a Samaritan’s Purse disaster relief team arrived to help with the cleanup, Lula happened to have her garage door open revealing all her cartons of shoeboxes!

Volunteer Paul Rovang of Edinboro, Pennsylvania, was impressed with all Lula had done for Operation Christmas Child, and eagerly worked to saw branches in her yard into a manageable size so the staff member operating the skid steer loader could haul them away.

Lula told Paul: “If I were still 80, I’d be out here doing this myself.” Paul was impressed right away with “her sweetness and energy.”

In less than three hours, the team transformed Lula’s yard and then presented her with a Billy Graham Study Bible when the work was finished.

Lula packed hundreds of shoeboxes for one reason: “It’s such a great mission opportunity,” she said. “Think about people who have never heard about Jesus—they’ve never heard His Name or had anyone present Him to them. When they receive a gift [along with that message], it really means something to them.”

Lula prays over every box, asking God to encourage each recipient to participate in The Greatest Journey, the follow-up discipleship program Samaritan’s Purse designed for shoebox recipients. She also prays that each child will “choose Jesus and receive the blessing of the Lord.”

“To reach people for the Lord is our business,” she said, referring to an old song she used to sing. The lyrics included the lines, “We’re ambassadors for Christ; I’m here on business for my King.” For Lula, it’s a life anthem.

“That’s what it’s all about,” she said. “The more boxes you can prepare, the more people you can reach for Christ!”

“The more boxes you can prepare, the more people you can reach for Christ!”

Packing is a Family and Community Affair

As a nonagenarian, it’s difficult for Lula to do all the legwork for packing shoeboxes on her own. So, Kathy shops for all the items throughout the year, buying things like balls and toothbrushes in bulk to get better deals. She also involves her grandchildren (Lula’s great-grandchildren) in packing the boxes. 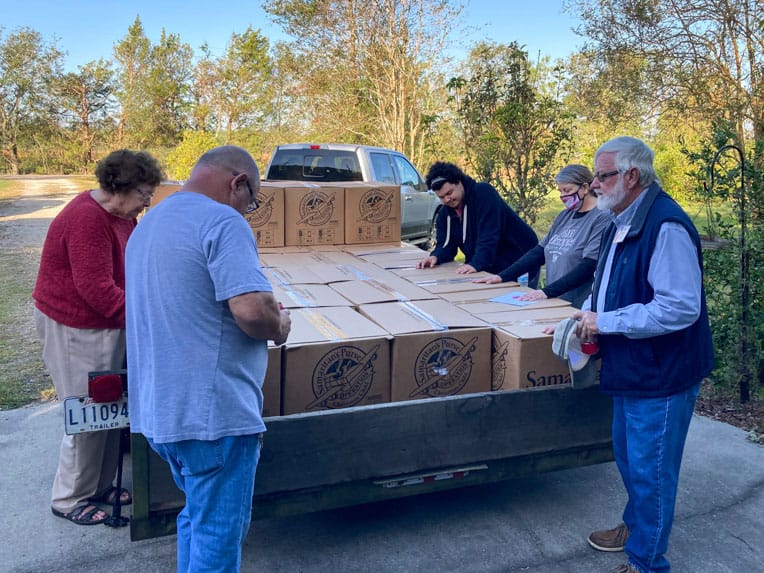 Members of the community gather to pray over Lula’s shoebox gifts.

“Anytime you can get the younger generation involved that’s just building it for future generations,” Kathy said.

In addition, Lula’s nieces and granddaughters send her money to buy items for the boxes.

She even had an 83-year-old friend who lost her roof to the hurricanes give her a sizable gift to put toward the requested $9 donation per shoebox gift. Through everyone’s generosity, she was able to contribute the nearly $8,000 needed to cover the cost of shipping and other project costs.

In addition to buying items, Lula and Kathy also work together to craft items for shoeboxes. During their time of isolation during the pandemic, Lula and Kathy made almost 500 caps on a loom. Lula enjoyed making some of them look like boxes of crayons or ice cream sundaes with how she wove the colors together. “COVID never got us depressed,” she said.

No Signs of Stopping

For about the last six years, Lula has also served as a year-round Operation Christmas Child volunteer, focused on church relations. In addition to calling congregations to thank them for participating in the Samaritan’s Purse project, Lula also visits churches and encourages them to pack shoeboxes.

The mother-daughter duo shows no signs of stopping anytime soon. Lula’s great-aunt lived to be 108, so Lula’s hopeful she has more years of shoebox packing ahead.

“I don’t know how long the Lord’s going to let me do this, but [others] will be packing long after I’m gone.”

Work at the Samaritan’s Purse U.S. Disaster Relief site in Jennings, Louisiana, wrapped up recently after more than 9,000 volunteer hours were invested in more than 300 homes—like Lula’s—affected by Hurricanes Laura and Delta. During this time of service, 60 people accepted Christ as their personal Savior.

There’s still time to bless a child with a gift-filled shoebox this year—Pack Shoeboxes Online!