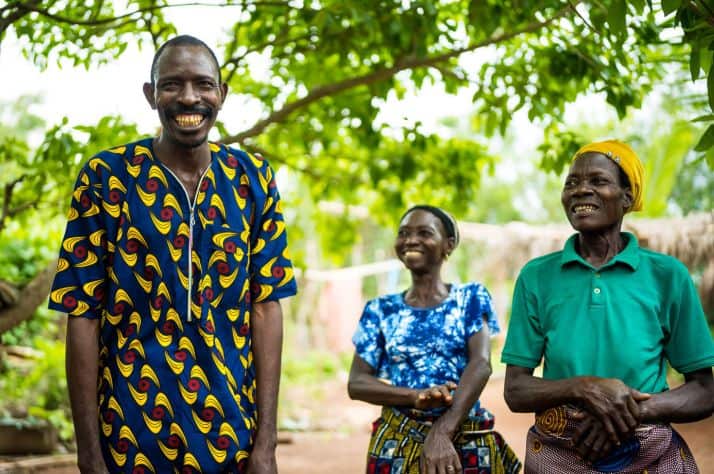 A shaman and his community experienced God's love through Operation Christmas Child. He has since received Jesus Christ and now a church has started in the region.

Ogouleroun was quick with a big smile on that Sunday morning, singing joyfully near the back opening of the rough-built church in a field donated by the village chief. The wooden structure was roofed with dried palm fronds, and Ogouleroun’s hands touched that roof as he worshipped. His tall stature stood out among the other Holi people in Ketou, a village deep in the rural areas of southern Benin—about an hour’s drive from where the King of Dahomey took his final and failed stand against the French. 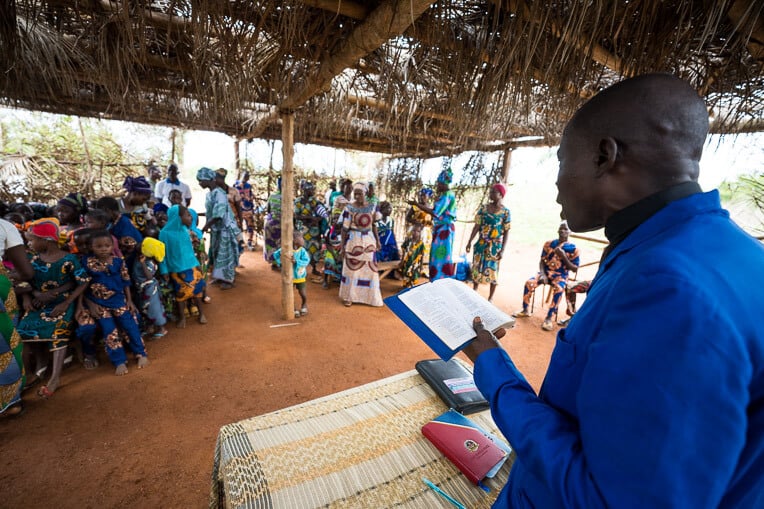 The church planter and pastor used Operation Christmas Child shoebox gifts to open doors for the Gospel. A church and many salvations resulted.

Ogouleroun was joining other villagers in celebrating Jesus and praising God for answered prayers—one of which was for a rainstorm to hold off until Sunday services were finished. The hut was built for shade, but a downpour would ruin the books and furniture brought in each Sunday.

Ogouleroun looms large in the village for significant reasons besides his height. First among them, he was once the village shaman, a position of prestige and power inherited from his father and going back through the fathers for five generations.

As priest to his people’s gods, he bore the weight of guarding them from the harm of outside influences.

“He was protecting their traditional way of life and this also meant appeasing the gods of their religion,” said Pastor Michele, who worked to find a breakthrough with the unreached Holi people of the region. Ogouleroun, in many ways a more powerful figure than the chief and elders, was the final obstacle and stronghold in the village.

“At first, Ogouleroun thought it was a trick. He was resistant. He could not imagine that someone would bring free gifts to the children,” Pastor Michele said, recalling the fear the villagers expressed about the church coming to take something from them rather than providing free gifts. “So when he saw the gift boxes and what was inside them, he realized this was no trick.”

Dozens of children attended last year’s outreach event, including Ogouleroun’s grandchildren. Since then, God has used that one outreach and those simple shoebox gifts to open doors for the Gospel of Jesus Christ.

God has worked in the village in ways that have amazed Pastor Michele and other church leaders from a neighboring region. Ogouleroun first became a person of peace for the pastor’s ministry. He allowed and even encouraged The Greatest Journey classes that took place just weeks after the outreach. And when the village chief offered to provide a field for building the first evangelical church in hundreds of square miles, Ogouleroun finally said “yes”—to the church and also to God. He trusted Jesus Christ as his Lord and Savior.

And now, he sings to the Lord while attending services in the church that he and his family had resisted for decades. It is still astonishing to some of his fellow villagers. Many of them—just a year ago—had walked the long narrow path to Ogouleroun’s compound to seek assistance from the fetish gods.

And as you near his home, there are still telltale signs of Ogouleroun’s former life as a shaman. Broken pots along the way litter the sides of the trail. A smattering of structures and the marks in trees where talismans once hung are all reminders of the life Ogouleroun and his family once lived. 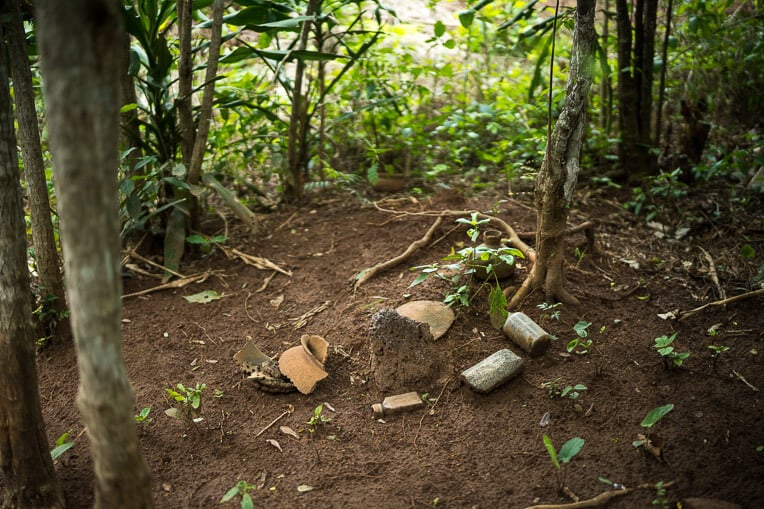 Broken pots and other artifacts in a grove of trees marks the trail leading to Ogouleroun’s home.

But they smashed those totems of a former life, including a statue representing their chief deity.

“It was our god. Our king,” Ogouleroun said. “My king was the fetish. The idol. I could not imagine that there was a better king and that’s why I was resistant to the church.”

He believed that the prayers and rituals he performed for the idol were the only ways to address the fear and uncertainty of life. And yet still he would have terrible dreams, still his crops would fail, and still he would address his own fears by drinking.

But the act of generosity by Christians bearing the Operation Christmas Child gifts opened his eyes to the possibility that he’d been resisting the better King. In conversation with the pastor, God began to change Ogouleroun’s heart toward Jesus.

“The devil was my king,” Ogouleroun said, recalling the day he renounced that old life. He prayed that day to Jesus. He said that same night, he slept and the nightmares never came. That week, he stopped getting drunk. That month, he began destroying all the accoutrements of his dark spiritual life. “No one could have forced me to believe that Jesus was the better King, just as no one could convince me about how sweet or how salty food is. You have to taste it yourself to understand.”

By God’s grace, the dreams stopped, the drinking stopped, and his papaya harvest that year was better than it’s been in a long time. All this strengthened Ogouleroun’s newfound faith and testimony.

And on a recent Sunday, almost exactly a year to the day that Christ Apostolic Church held its first services, Ogouleroun, now a church elder, was enjoying another answered prayer—of God holding back the storm until the final song concluded.

When the rain finally started and everyone scrambled to store all the vulnerable valuables, he laughed without restraint at the impeccable timing. 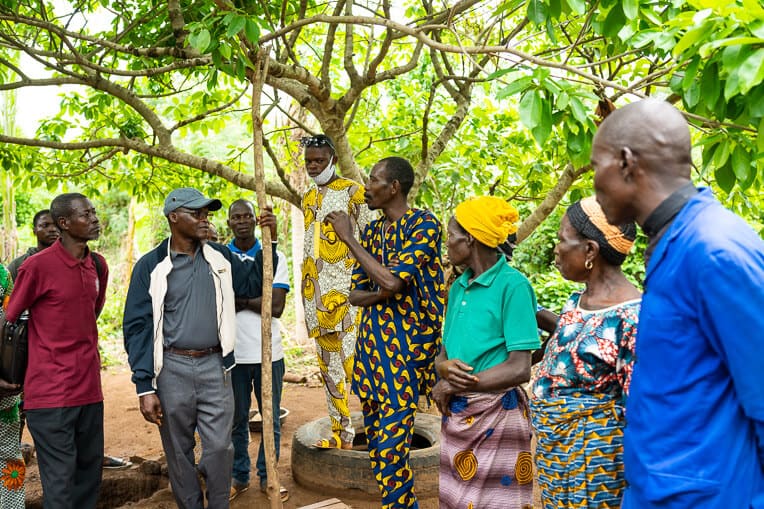 Now Ogouleroun is being discipled by church leaders and is himself sharing the Gospel with fellow shaman in the region.

Since 1993, we have given more than 198 million Operation Christmas Child shoebox gifts to children as a tangible expression of God’s love. National Collection Week 2022 is coming: Nov. 14-20. You can pack a shoebox!