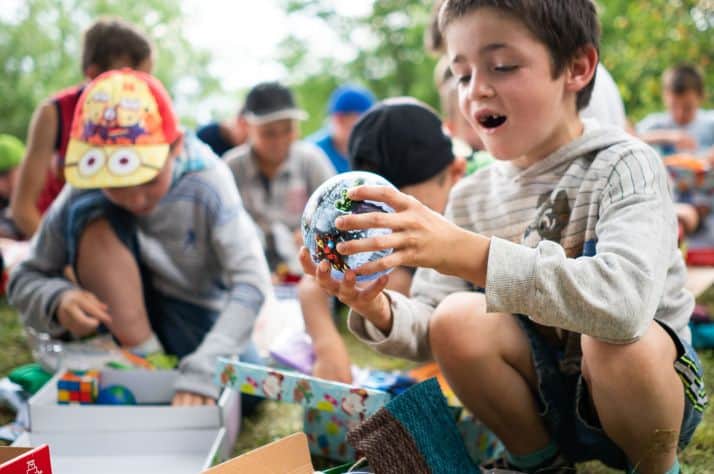 Get to know one national leader in Central Asia who has been serving with Operation Christmas Child for 20 years.

The millions of shoebox gifts packed in 2020 are currently being processed for overseas shipment and will soon be on their way to National Leadership Teams around the globe. These volunteer teams work together with local churches to bring the Gospel of Jesus Christ to children through the distribution of your prayerfully packed shoebox gifts. It’s a glorious day when boys and girls throw off their box lids, smile with delight at what they’ve received, and, most importantly, hear the Good News of God’s Greatest Gift. 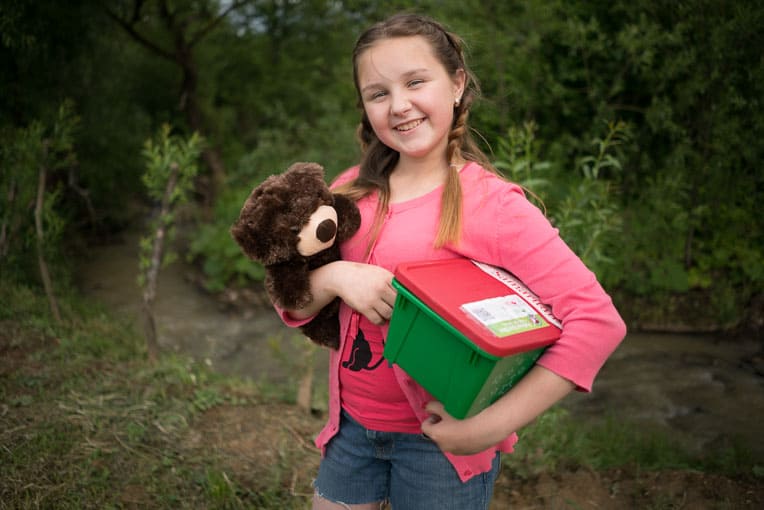 This young girl especially enjoyed the teddy bear and letter she found inside her shoebox gift. She specifically thanked shoebox packers for not forgetting about kids like her.

As a child, Umed dreamt of having a soccer ball, a quality T-shirt, or a toy car, but his parents could not afford to buy them for him. Now, he rejoices to see the joy and tears of children as they open their gift-filled shoeboxes full of items like these. He especially remembers how one poorly dressed woman repeatedly thanked the Operation Christmas Child team for the shoebox gift her boy received. She explained that she had two other children and no husband, so her boy always went barefoot because she could not afford to buy him shoes. Inside her son’s shoebox was a pair of shoes that fit him perfectly!

“I remember this boy’s feet when he took off his new shoes,” Umed said. “There were cracks all over and earth embedded. We washed his feet and gave him a pair of new socks.”

Umed is now a model of Christ’s love, but he was not always inclined to wash others’ feet.

A “Father” Before His Time

As Umed grew up, civil war-ravaged his former Soviet country, causing it to become one of the poorest in the world. Dozens of hospitals and schools were destroyed. Factories closed, bringing about widespread unemployment and prompting men to leave the country in search of work. This left many “living orphans and widows” whose fathers and husbands returned home once a year at best.

During this trying time, 16-year-old Umed became the father figure for his three younger sisters and two brothers. They lived together in the capital city, rife with murders and robberies.

“I loved my family and for their sake, I was ready to do anything—even steal,” Umed said.

He became a crafty thief, until he was caught one day and put in a pretrial detention cell for six months before being sentenced to two years of probation.

“I could have been killed,” Umed said. “I was afraid of dying. At the same time, I felt shame for being a thief.” He prayed to God for help to change, because he realized he could not change himself.

Around this time, Umed met a Christian who shared the message of the Gospel of Jesus Christ with him. He thought, hopefully, Maybe Christ is able to change me, because He is the One who forgives sins and loves sinners.

The Thief Becomes an Evangelist

On September 1, 1996, Umed accepted Christ as his Lord and Savior and joined a local church. Jesus changed him, and the thief became an evangelist. 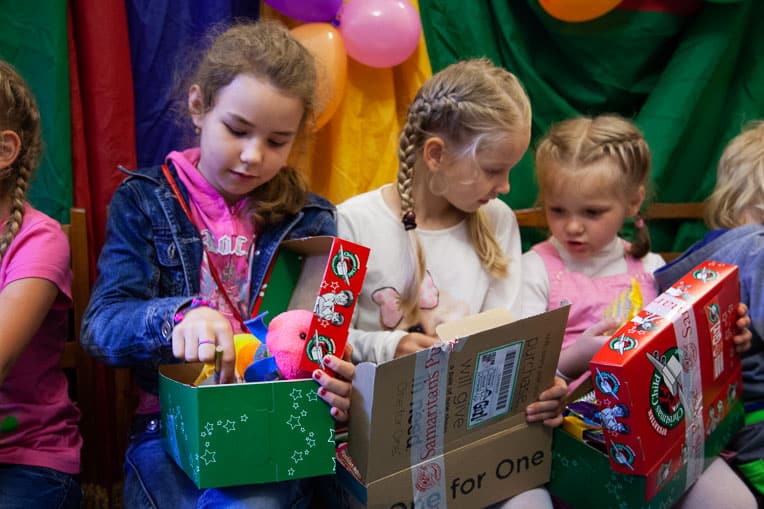 Children enjoy discovering the new treasures inside their shoebox gifts in 2015.

However, his family that he loved so much was not happy with the change. Umed’s father, who had since returned home, kicked him out of the house.** Still, Umed stayed the course with his faith.

In the late 1990s after the civil war ended, he joined a team of young believers who visited boarding schools for deaf and mute children in order to share the Good News. During this time, Samaritan’s Purse began distributing Operation Christmas Child shoebox gifts in the country.

“I wanted to do my best to share God’s love with needy children because they appreciate it in a special way,” Umed said. “In this country, there are over 2 million children and most of them are needy. We have a lot of work to do!”

For the past 20 years, Umed has worked with Operation Christmas Child, serving as national team coordinator during most of that time. He also pastors a local church, providing care for roughly 400 people as well as leading children’s ministry and summer camps.

“Umed is a faithful servant of Christ,” said Pastor Oleg*, a veteran missionary in the country. “For the past few years, he has been often called for questioning [by local authorities]. It’s a heavy load, but he doesn’t give up.”

The church in this country is under scrutiny from the government. “As a pastor, I face strong pressure and often threats,” said Umed. “Have I ever thought to give up everything and leave the country? Yes. But at such moments the Lord gave me hope for the triumph of the Gospel. He reminded me that I am not the only one who goes through persecutions—some of my brethren are killed for their faith in Christ.”

Amid all of this, Pastor Umed continues to work to build up Operation Christmas Child’s National and Regional Leadership Teams within the country. God has filled the heart of a former thief with love for children so that year after year he continues the work of the Gospel through shoebox gifts.

“I would like from the bottom of my heart to thank the volunteers from the sending countries who do so much for those they have never seen in person. Their work is not in vain, because it bears much fruit. Despite the obstacles, children come to know Jesus, get discipled, and become evangelists.”

Please pray for national leaders across the globe who go to great lengths to deliver your carefully packed shoebox gifts to children in need.
—

Even if you missed National Collection Week, you can still Pack Shoeboxes Online! Shoeboxes built online enable you to share God’s love with a hurting child overseas, without even leaving your home.

*Names in this story have been changed for security reasons.

**When Pastor Umed’s father was in the hospital before his death, he had the chance to talk with him often and pray with him. On November 24, 2013—Umed’s birthday and the date of his pastoral ordination—he received a special gift from the Lord. His father became a believer in Jesus Christ!

Operation Christmas Child is a hands-on project that brings joy and hope to children in desperate situations around the world through gift-filled shoeboxes packed by Canadians. It is one way to remind children suffering as a result of war, poverty, famine, disease, and disaster that they are loved and not forgotten.
Top Stories
You Can Still Pack Shoeboxes Online!
Work Finishes on Prince Edward Island
Cattle Farming Offers Income for Impoverished Families
Emergency Relief Supplies Distributed After Deadly Flooding in Pakistan
Piglets Bless Families in Indonesia