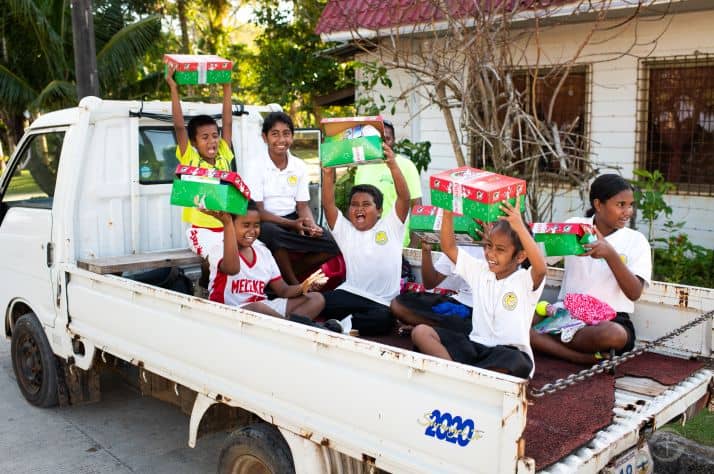 Shoeboxes were distributed as part of a five-year initiative to reach every child on 1,000 Pacific islands with the Gospel of Jesus Christ.

Franklin Graham’s bold vision to deliver gift-filled Operation Christmas Child shoeboxes in Jesus’ Name to every child on 1,000 Pacific islands—more than half a million kids—began early last year and reached more than 65,000 children in 2019.

Earlier this year, the campaign arrived ashore on Palau, where scores of shoeboxes were handed out to children in need. Several thousand more will follow in the months to come, distributed following all local safety regulations. An estimated 1,300 boys and girls across Palau will go on to participate in The Greatest Journey discipleship course, created by Samaritan’s Purse for shoebox recipients.

The first shoebox distribution took place in late February on Peleliu, a remote, five-square-mile coral island. Along with two tiny nearby islands, they make up one of Palau’s 16 states.

Scattered across Peleliu’s lush equatorial landscape, shaded by towering coconut trees, are U.S. and Japanese war relics—reminders that one of the bloodiest and most prolonged battles of World War II was fought here. In stark contrast, Operation Christmas Child is now bringing Good News and great joy to the island’s children who are hungry for hope. 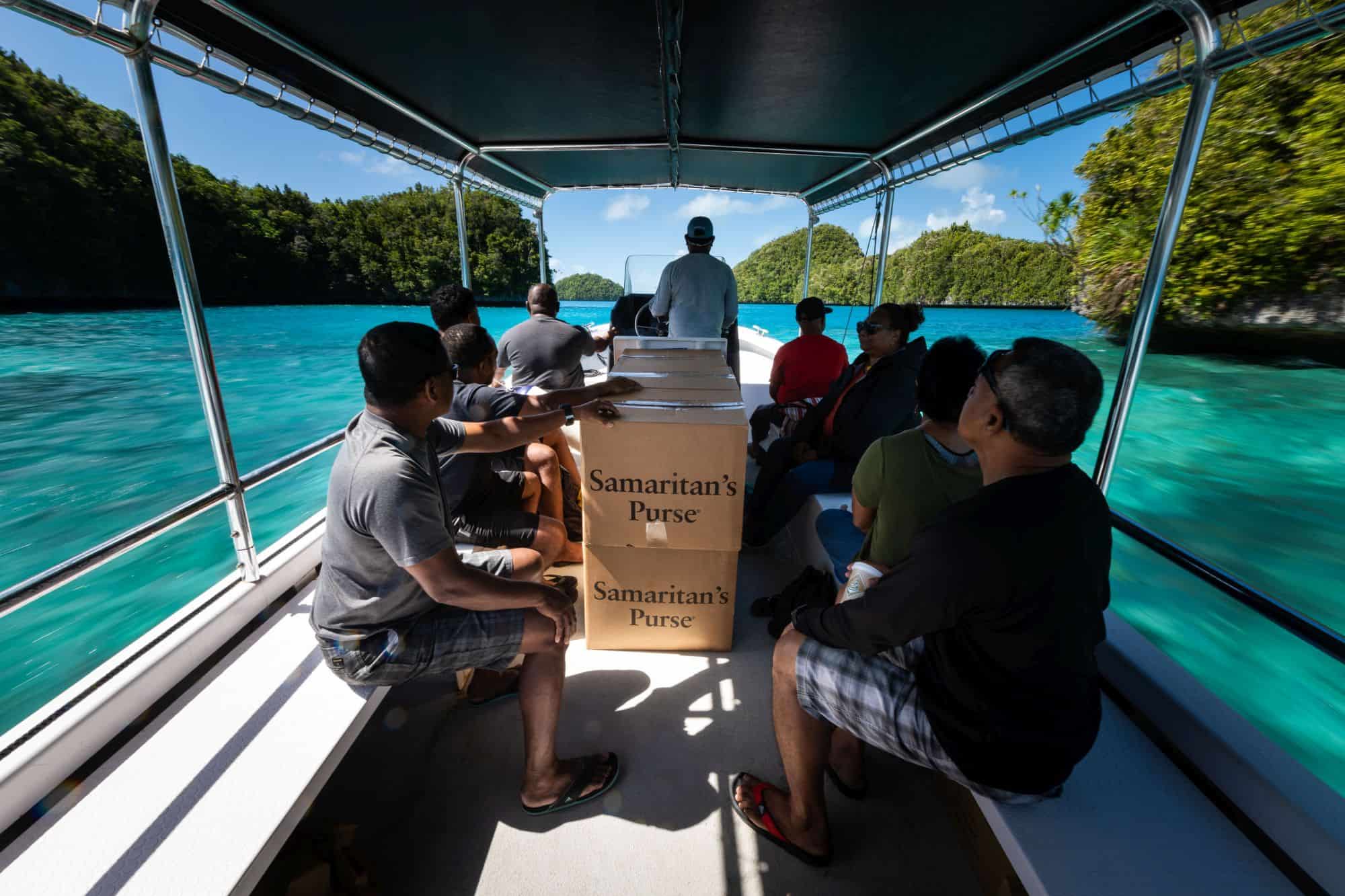 Shoebox gifts travel by chartered boat from Koror through the Rock Islands to Peleliu for the first outreach event in Palau.

Just under 500 people live on Peleliu, which is accessible only by chartered plane or boat. Children here attend Peleliu Elementary—the island’s only school—while teenagers travel an hour or more each morning by boat to Koror Island for high school and then make the long 28-mile journey back home in the afternoon.

In late February, before the coronavirus reached pandemic level, the elementary school’s 76 students assembled in a large open-air gymnasium eager to receive their gift-filled shoeboxes.

Grace Kabino-Kyota, a local leader with Operation Christmas Child and The Greatest Journey, was especially excited to be on Peleliu to present the Gospel and hand out shoeboxes. Grace grew up in the state of Ngiwal on Palau’s northeast shore and has long prayed for the country’s children.

“My prayer is that they know Christ, but if we don’t tell them about Him, then who is going to do that?” she said.

That’s why Operation Christmas Child is here—to not only give shoebox gifts to children but to also share with them the Gospel of Jesus Christ. About a fourth of Palauans claim to be evangelical Christians but Modekngei—an indigenous religion unique to Palau—still holds a tight grip on many.

Rengesuul Yobech, a native Palauan who is the Operation Christmas Child International Field Representative for the Pacific, was also excited to participate in the shoebox outreach events.

“For them to hear the Gospel firsthand is really exciting,” he said. “Their smiles and their excitement remind me of God’s great love. Not all children in Palau receive gifts at Christmas or on their birthdays, so for many of them this is really very special and wonderful.”

After the outreach event on Peleliu, Grace and Rengesuul traveled the next day to Koror—Palau’s most populous and touristed island—to visit the Gospel Kindergarten at Koror Evangelical Church. Prima Kual, the school’s principal, said that many of the 64 students were so excited when they learned they were going to receive a gift that they arrived an hour early to school to make sure they weren’t late. And Prima was just as elated as the kids. 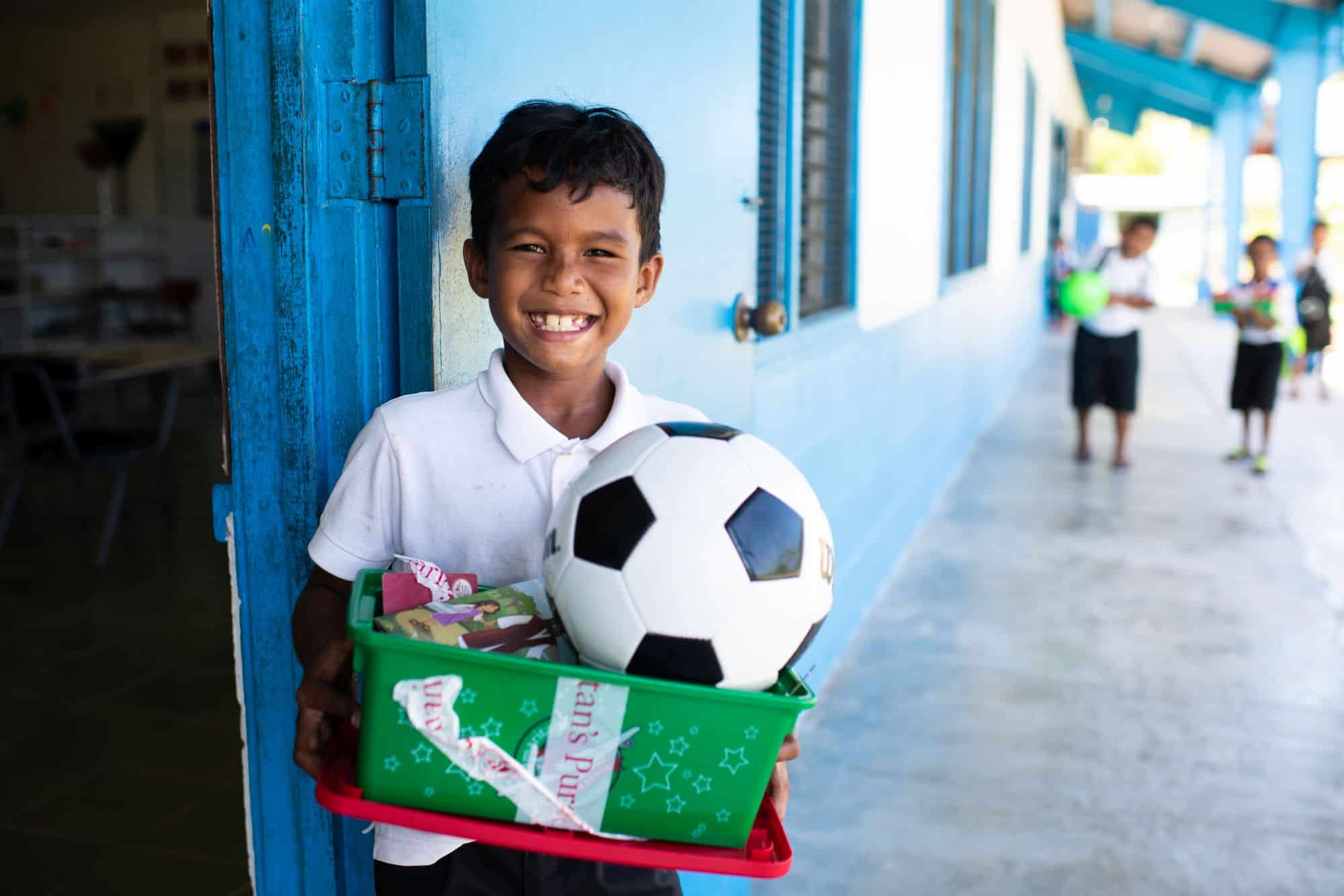 A boy from Peleliu island celebrates the “wow” toy in his gift-filled shoebox.

“Last night, I couldn’t wait until morning because we’ve never had this kind of thing come to us,” Prima said. “This morning when I opened the door and saw the boxes I said, ‘Lord, I just love these people. I love what You are doing through them.’ It’s as if I’m a child waiting to see what’s inside of those boxes. God is so good!”

When 4-year-old Claire opened her shoebox, she was delighted to see a doll, a stuffed animal, and a white washcloth, among other toys and hygiene items. She pressed the washcloth to her smiling face and said, “It’s mine! I wanted these things, and Jesus gave them to me.”

Claire’s friend, Amanda, sat next to her and was busy combing her hair, thrilled, she said, that “God gave me a new brush!”

Prima said that a lot of the students come from non-Christian homes, so she is “encouraged that Samaritan’s Purse has come to present the Gospel to them. It’s very important that they don’t just hear the Gospel from the school but also hear it from others. It cements the Gospel in them, and they won’t forget it.”

Prima will soon begin teaching The Greatest Journey and also using the discipleship materials to reach children in her village. “My husband is a pastor, and we were praying about what we could do to reach the kids in our village. And now this will be a way to reach them with the Gospel.”

As excited as Grace and Rengesuul were to hand out boxes on Peleliu and Koror, they were even more delighted to travel to their home village of Ngiwal, which has a population of less than 300. Rengesuul now lives on Saipan, but Grace, after many years away, returned to the isolated seaside neighborhood in 2012. 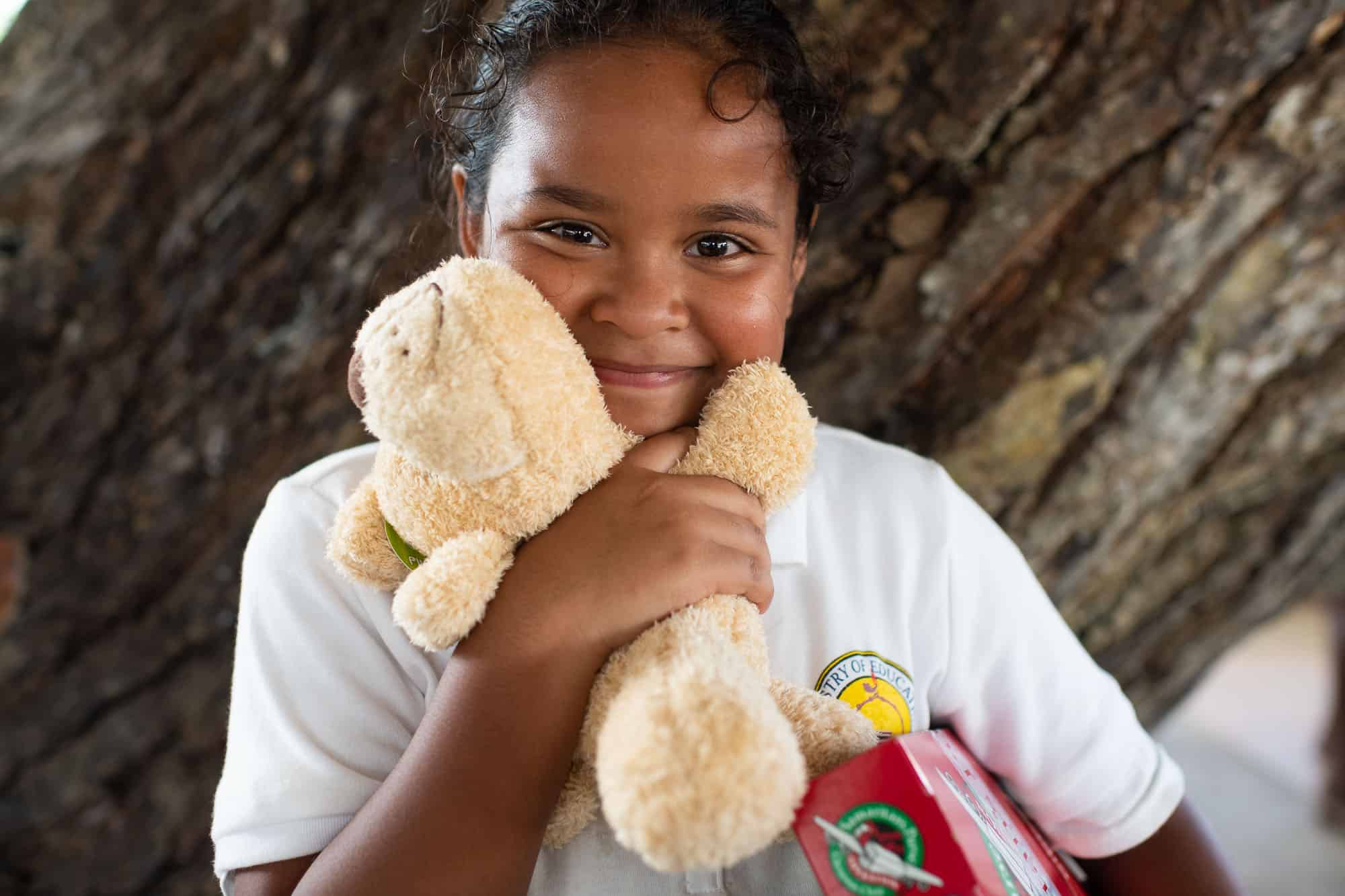 A girl on Ngiwal treasures the stuffed animal she found in her shoebox gift.

“I’m overwhelmed with joy,” Grace said as she watched children gather under an outdoor community shelter where the shoeboxes would be unveiled and she would proclaim the Good News of Jesus Christ.

Rengesuul was also overcome with emotion.

“I want to thank Operation Christmas Child and Samaritan’s Purse for coming so very far away to Palau. We are a very small country with only around 20,000 people, but yet they took their time to come to be a part of what God is doing in Palau. I want people to understand that this is an opportunity for children to know God who so graciously gave His Son to die on the Cross for us. Operation Christmas Child and The Greatest Journey really bring that message to life.”

The Greatest Journey Begins on Palau

Later the same day, after the shoebox distribution, the Ngiwal children sat beneath the shade of a nearby open-air pavilion along the beach where Grace taught the first Greatest Journey class on Palau. Martha, a young teenager, was especially taken with what she learned. 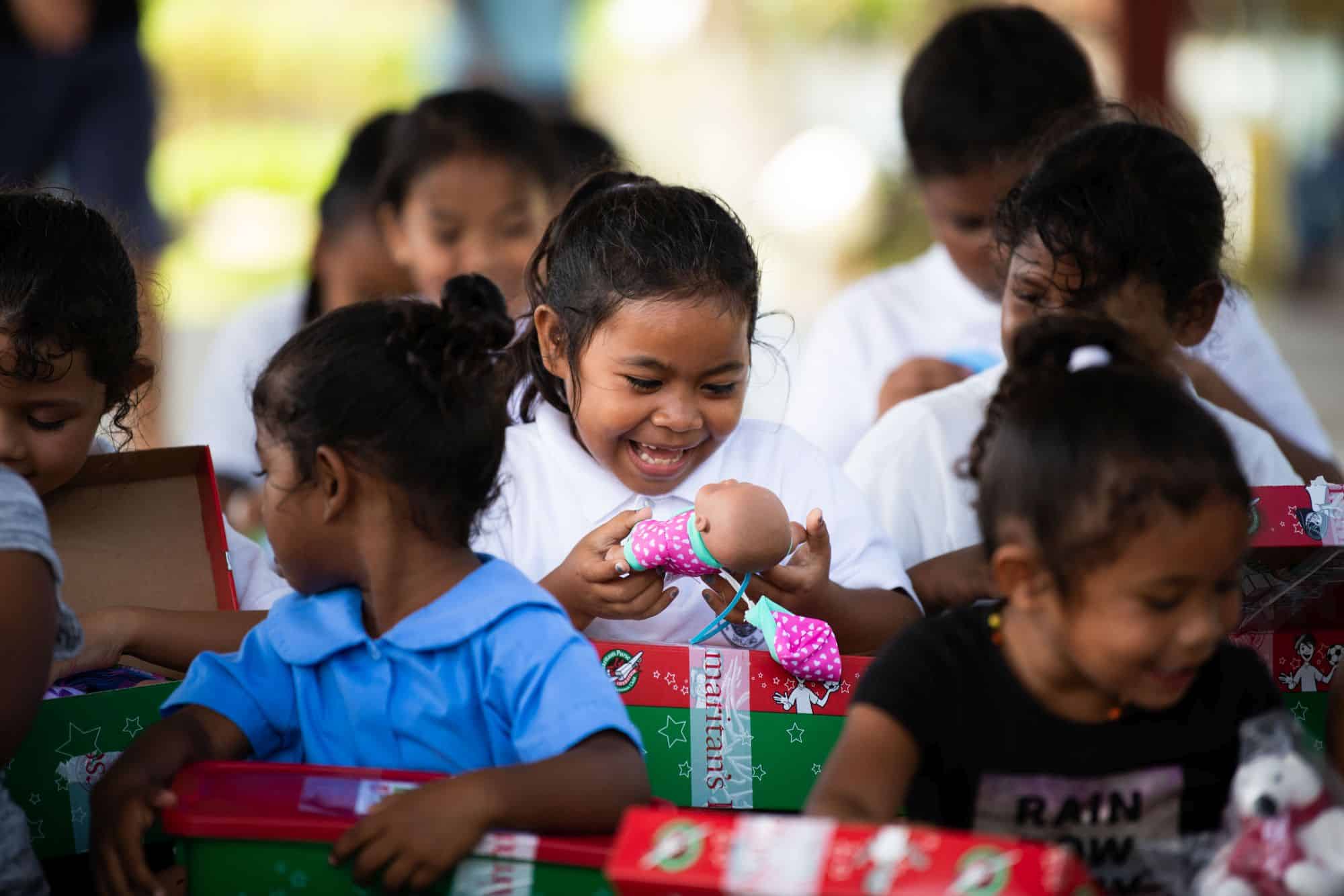 “I would tell other kids to take The Greatest Journey,” she said. “It helps us to know that God loves us and that the reason we are on earth is because He has a purpose for us. We should live our lives for His glory—that’s why He created us. He loves us.”

Due to the pandemic and the closure of Palau’s borders, shoebox distributions and The Greatest Journey classes were halted for a time. We praise God that there are no cases of coronavirus on Palau, and now distributions and classes have resumed.

Please pray for Palau and for children and families in the Pacific. By the end of 2020, approximately 80,000 more children, including kids living on Guam, the Marshall Islands, and the Solomon Islands, will have received shoeboxes as part of the Pacific island initiative, and an estimated 25,000 of them will have participated in The Greatest Journey. But hundreds of thousands more still need to be reached with the Gospel of Jesus Christ. 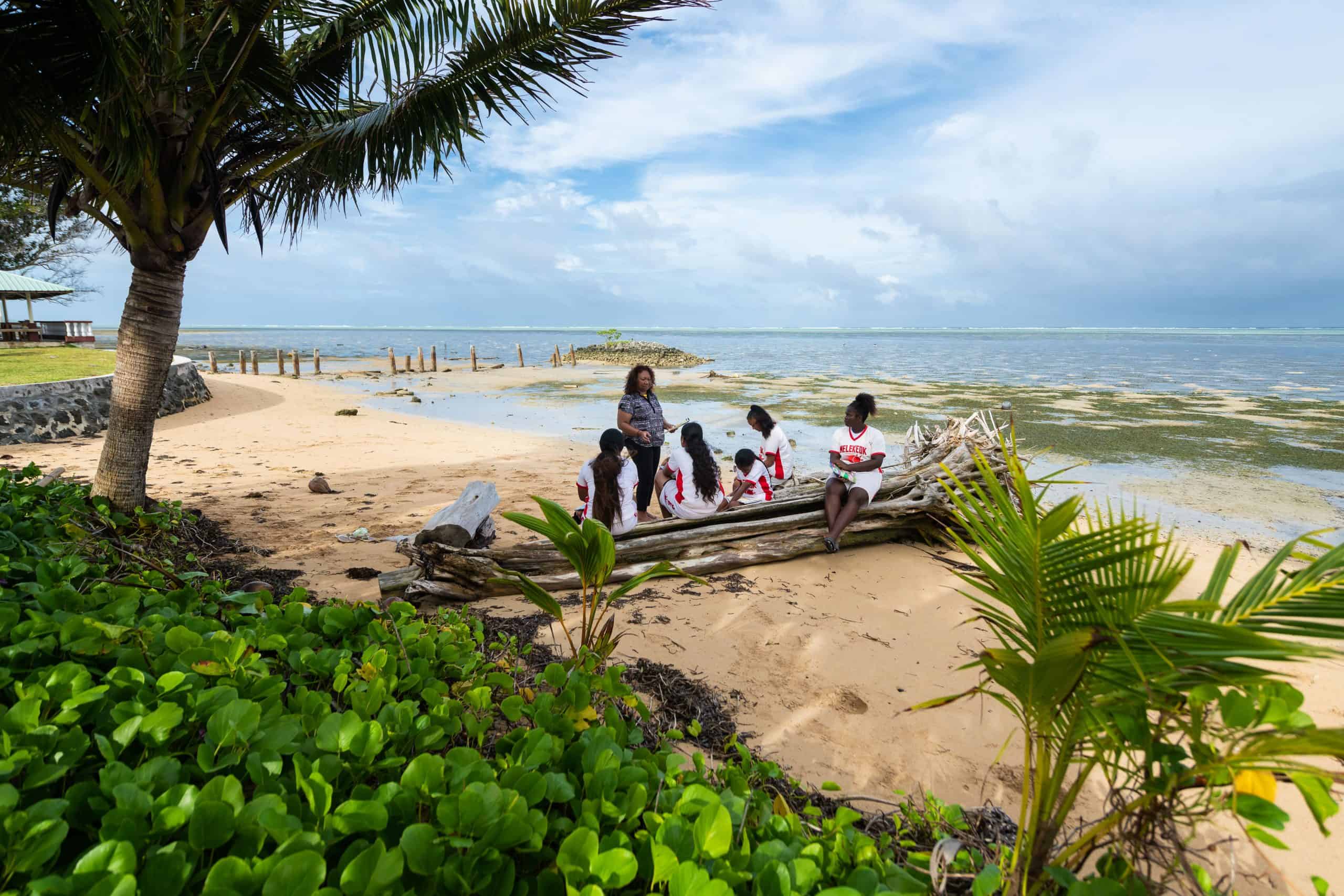 Grace Kabino-Kyota teaches The Greatest Journey in her home village of Ngiwal.