After hearing the Gospel and receiving a shoebox gift, a teen with cerebral palsy puts his faith in Christ, returns to school, and becomes a Special Olympic medalist.

Teenaged Sampil is a different person after receiving an Operation Christmas Child shoebox gift. Once generally homebound, he now travels freely about the city of Ulaanbaatar, Mongolia. Instead of being lonely, he now plays on team sports and has many friends. He initially had finished his education at the primary school level, but after a five-year break from his studies, he recently returned and graduated from high school. 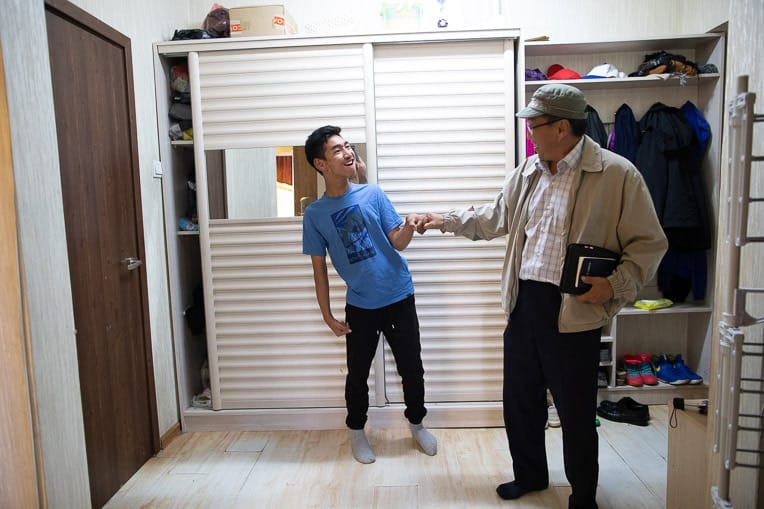 Chuka (right) greets Sampil with a fist bump when he stops by his home.

The changes all started when someone shared the Gospel with him and offered him a tangible expression of God’s love in a gift-filled shoebox.

Sampil was supposed to attend an Operation Christmas Child outreach event for disabled children in March 2015, but that day he had a cough that left him critically ill. Cerebral palsy gives him a weakened immune system so that what is ordinary for others can be devastating for him. Hearing of Sampil’s illness, an Operation Christmas Child volunteer named Chuka Bayaraa visited his home.

As Sampil and his parents and siblings gathered in the living room, Chuka told them of God’s love expressed through Christ’s life, death, and resurrection. They were all interested, but Sampil alone made the decision to surrender his life and accept Jesus as his Lord and Savior.

To Sampil’s surprise, Chuka also gave him a gift-filled shoebox that included a towel, toothbrush, and notebooks. “The notebooks really encouraged me to go back to school and study,” Sampil said.

But more importantly, his heart had been transformed. 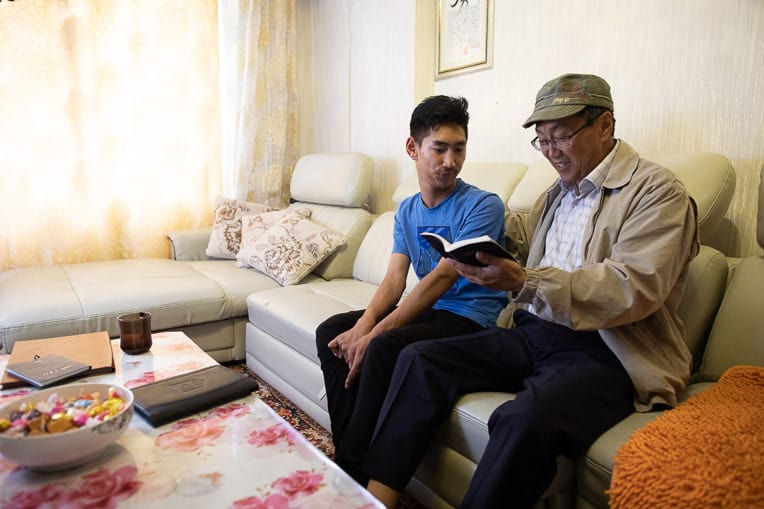 Since Chuka introduced Sampil to Christ, they often study the Bible together.

“After I got a shoebox, I became a Christian and my relationships with others changed,” Sampil said.

Chuka saw firsthand as the “new” Sampil emerged. “He became a very happy boy. He enjoyed going to school and being with his friends. He had a very low self-esteem, but after he became a Christian his understanding of himself changed.”

Now instead of being self-conscious, he makes a point to serve by volunteering as an assistant teacher at a Christian camp for disabled children. Responsible for caring for 16- and 17-year-old students who attend, he points them to Christ, his new source of hope.

“Jesus gave me a love and a heart to talk to [the] children,” Sampil said.

Growing in So Many Ways

This expanding heart for the Lord continues to be nurtured as Chuka spends time with Sampil in his home.

“We pray together and study the Bible,” Chuka said. They talk about Sampil’s future dreams and his mentor shares his burdens with him as well.

During these discussions, the topic of forgiveness came up. Chuka learned that Sampil’s father left the family when he was young. As a result, Sampil carried hatred in his heart toward his father. He experienced some healing through a step-father who had loved him well, but he still had hard feelings toward his biological dad. But as Sampil served at the Christian camp this past summer, he made the choice to forgive his father. 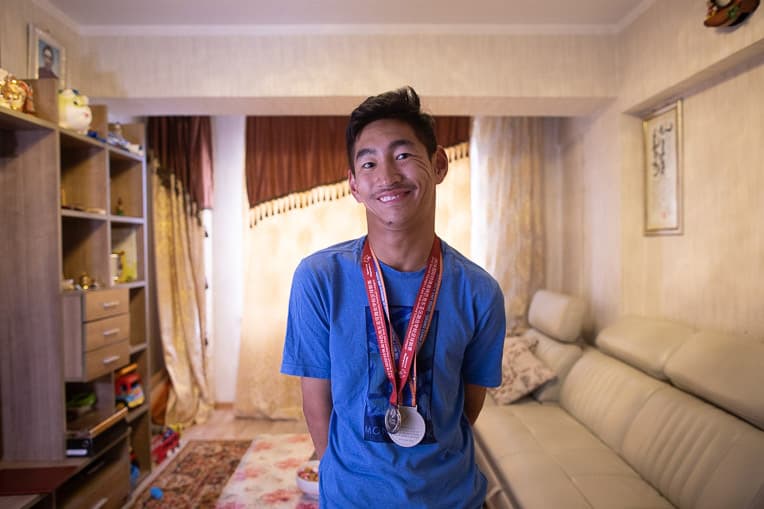 As Sampil continues to grow in faith and maturity, his witness shines brightly even beyond his family and peers.

“Parents see Sampil in the community and it gives them hope that their children can grow socially, emotionally, and physically,” Chuka said.

In addition to working at the camp and maintaining an increasing network of friends, Sampil is getting stronger as an athlete. He joined a club that competed with Special Olympics East Asia and traveled with them to China. There he experienced two firsts: a train ride and exposure to a country other than his own.

Sampil never dreamed that he’d become a Special Olympic medalist, but his teams walked away with a silver in both soccer and bocci ball.

In the midst of this success, Sampil’s focus remains steady. “My dream is to be a teacher like Brother Chuka,” he said. “I want to share the Gospel with children.”

Please pray for boys and girls all over the world as they receive Operation Christmas Child shoeboxes. Ask that God will use these gifts as uniquely and powerfully in each of their lives as He has for Sampil.

You can be a part of this exciting international evangelistic outreach by prayerfully packing a gift-filled shoebox! Learn how to pack shoeboxes online.