Evangeline and the School Supplies 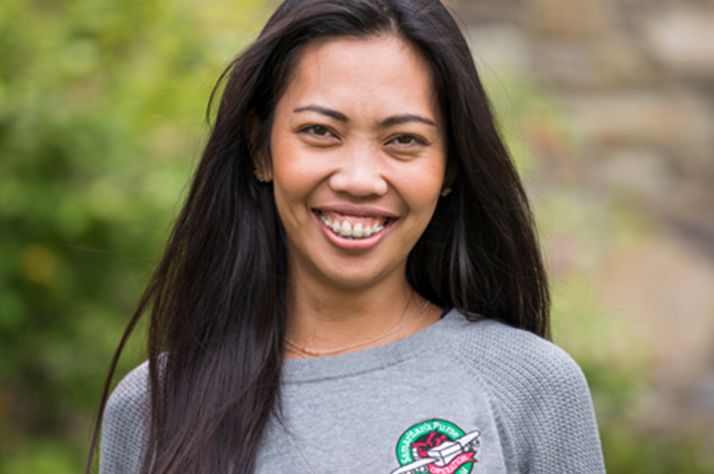 “Growing up in a dump site you smell smoke and other unpleasant things, but the shoebox gifts smelled so good.”


I grew up on a small island in the Philippines. There were five kids in my family—I’m the second oldest. My parents were both young when they got married—my mom was 16 and my dad was 17. They didn’t know what they were doing, so my grandmother raised me and my older brother. When she passed away when I was 6, my parents took me and my older brother back and started living together permanently. They started having more kids, and I was 9 years old when my mom got pregnant with my younger sister.

Around that time, my dad was working in a factory that caught on fire. He was the lead supervisor and the blaze started in his department. After that tragedy, he didn’t want to be a father to us, but instead became an alcoholic and a drug addict. This happened at the same time that the government of the island decided to make the land close to my parents’ house a dump site. This turned into our livelihood. After my father lost his job and didn’t want to deal with us, my mom and my older brother would go to the dump site and look for things they could sell so they could buy food for us. That’s how our rough life began.

When my younger sister was 3, she would sneak out of our house and go to a church at the dump site. Every time I would look for her, I would always find her there. They were teaching the kids Bible stories, singing Bible songs, and giving food to the children. I thought it was all a scam, but God showed me otherwise.

One of my neighbors invited me to help cook food for the children. The first or second time I assisted, the pastor introduced Christ to me. While I was not initially receptive, I know there was a seed planted in my heart right away. After that, I became really involved with the church. Every week I would help them cook the food. I’d read Bible stories to the children and sing the Bible songs. It became my routine every Saturday and I really enjoyed it.

Around Easter, my pastor invited me to attend a youth camp where I accepted Jesus into my heart. That was the start of my journey with the Lord and it has been amazing since then.

That December, Samaritan’s Purse came to the dump site. I was tall for a 13-year-old and tall for a Filipino, so they asked me to help distribute shoebox gifts to the kids. I helped, but every time I handed a shoebox to a child, I would shake it and smell it. Growing up in a dump site you smell smoke and other unpleasant things, but the shoebox gifts smelled so good. I was praying that God would give me one of them.

As I was handing out the boxes, the pile was disappearing one by one. The kids just kept coming and coming. I thought, I’m not going to get one. My younger brother and sister got theirs and sat down outside the church with their boxes and waited for me to finish.

To my surprise, a lady from Samaritan’s Purse saved a box for me at the end. When she tapped me on the shoulder and handed it to me, I was amazed. This was the first gift I had ever received. It was precious. It was special. I was 13 and had never received a gift. It was really meant for me.

Inside I found school supplies and my favorite was the pink, glittery notebook that I used that year at school. I remember pretending to be a writer with it. I also received pencils, towels, a toothbrush, and two kinds of fresh-smelling soaps. That was the good scent in the boxes.

I received my shoebox gift the same year I accepted Christ, and it really solidified my relationship with Him. I knew that my life changed when I accepted Jesus into my heart, and I felt that through the shoebox He showed me the void in my heart had been replaced with love. It was a gift from Him. This love from my Heavenly Father meant so much, because it was at this time that my relationship with my dad started to crumble.

“I received my shoebox gift the same year I accepted Christ, and it really solidified my relationship with Him.”

Since then, I’ve been able to introduce Christ to many of my family members—to my cousins, to my younger siblings, to my aunts and uncles. But unfortunately, my older brother, my mom, and my dad have not yet received Christ. I still believe that they will come to Him, but I am grateful the rest of the family has accepted Jesus into their hearts.

“I felt that through the shoebox, the void in my heart had been replaced with love.”

Now as an adult, I enjoy packing shoeboxes with my husband and two girls from our home in Kansas City, Kansas. A few years ago, we were also able to return to the Philippines to observe one of The Greatest Journey discipleship classes that is offered to shoebox recipients. I felt like I had come full circle watching that class. It just seems like yesterday that I got my shoebox gift.

Operation Christmas Child is a project of Samaritan's Purse.
Pack a Shoebox
How to Pack a Shoebox
What to Pack in a Shoebox
Shoebox Labels
Pack a Shoebox Online
About
Mission & History
The Journey of a Shoebox
To the Ends of the Earth
Evangelism & Discipleship
The Greatest Journey
Latest Stories
Videos
Media Resources
Frequently Asked Questions
Resources
Project Leaders
Family (& Children)
Students
Churches
Tips for Packing Parties
Year-Round Packing Ideas
View All Resources
Get Involved
Pack a Shoebox
Lead Your Church or Group
Volunteer
Become a Drop-off Location
Pray for Operation Christmas Child
Ways to Give
Mission Trip Projects
© Copyright 2021 Samaritan's Purse Canada. All rights reserved.