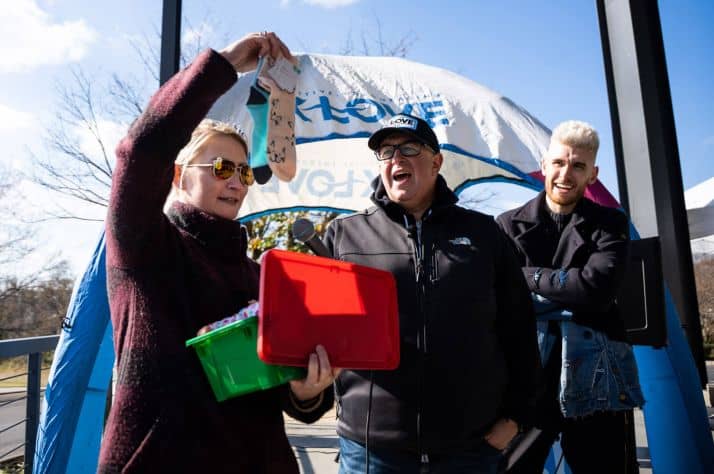 Elizabeth Groff received an Operation Christmas Child shoebox years ago in Ukraine. Now she’s helping to pack the 200 millionth gift on a tour across the United States.

Elizabeth Groff is on a special journey to help pack the 200 millionth Operation Christmas Child shoebox gift since the Samaritan’s Purse project began in 1993. 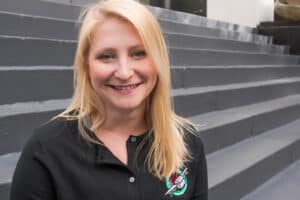 Elizabeth Groff is taking the 200 millionth shoebox gift across the United States and then to Ukraine.

Elizabeth, who received a shoebox gift years ago as a lonely child in an orphanage in Ukraine, is currently traveling to different U.S. drop-off locations and processing centers with the symbolic shoebox to encourage people to prayerfully pack boxes in Jesus’ Name.

The project will soon reach this historic milestone as faithful shoebox packers bring their gifts to more than 5,000 locations across the country during National Collection Week (Nov. 14-20). We praise God for the millions of children, as well as families and communities, who’ve been reached with the Gospel of Jesus Christ over nearly three decades.

Elizabeth wants people to know that God is using these gifts to demonstrate His love to children who are in desperate need.

“There are so many children out there just like me who have never heard of Jesus or experienced His everlasting love,” she said. “I know the impact a single shoebox can make. It absolutely changed my life. There’s no greater reward than being able to serve through this ministry.”

At each stop along the national tour, Elizabeth is adding a gift item chosen by voters on our Operation Christmas Child social media platforms. She started her journey by packing a doll on Nov. 12 in Denver at a local church that serves as a drop-off location. She plans to make her way to the Chicago area on Nov. 14; then she’s on to Nashville (Nov. 16); and Punta Gorda, Florida, (Nov. 18) where Samaritan’s Purse is working after Hurricane Ian.

The final leg of her U.S. journey ends at our Charlotte Processing Center on Dec. 3, where Franklin Graham, Samaritan’s Purse president, will add the final gift to the special shoebox.

Elizabeth’s adventure will culminate later in December when she hand delivers the celebratory 200 millionth shoebox to a young girl in Ukraine affected by the ongoing war.

“I pray that this child realizes and understands that they aren’t alone. With everything going on Ukraine, it must be so difficult for them,” Elizabeth said. “I want them to know that there is the hope of Jesus.”

National Collection Week is Nov. 14-210 Check out these great gift ideas and find a drop-off location closest to you. You can also Pack a Shoebox Online.

Elizabeth Groff and the 200 millionth shoebox were near Nashville on Nov. 16. Full Life Church in Franklin, Tennessee, a drop-off location for Operation Christmas Child, hosted the tour event.

Elizabeth added two pairs of socks to the special shoebox, one with a sloth (blue) and one with kittens (pink).

There was a packing party where visitors, including Colton Dixon, a Christian musician who appeared on the 11th season of American Idol, packed more than 100 shoebox gifts. Colton remembered packing shoebox gifts as a child. 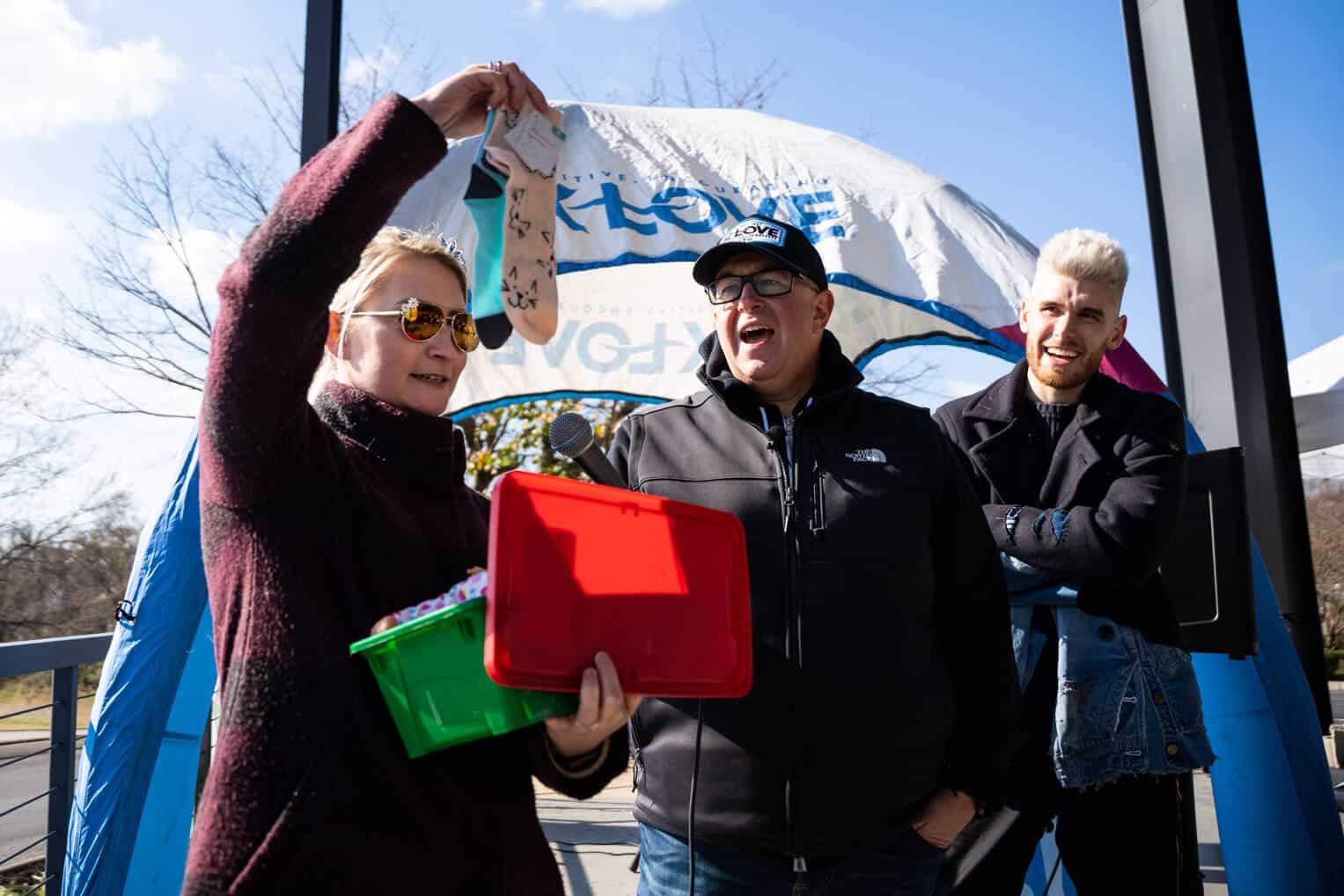 “Now with kids of my own–I have 2-year-old twin girls–and I’m so excited to get them involved,” Colton said. “The Bible says it’s better to give than to receive. That is the heart of this ministry, and we are so honored to come alongside Operation Christmas Child.”

K-LOVE Radio DJ Scott Smith was also there for the event. “For years our family has been packing boxes just like this for Operation Christmas Child,” he said. “It has been such a beautiful way for us to teach our kids about generosity.

“It’s so exciting, right here today in Franklin, Tennessee, we are packing the 200 millionth shoebox with Operation Christmas Child. That means 200 million children whose lives have been impacted with a simple gift of kindness.”

On the first day of National Collection Week, shoebox packers started dropping off their Operation Christmas Child gifts across the country, including at the Samaritan’s Purse Midwest Ministry Center center in Aurora, Illinois (suburban Chicago). 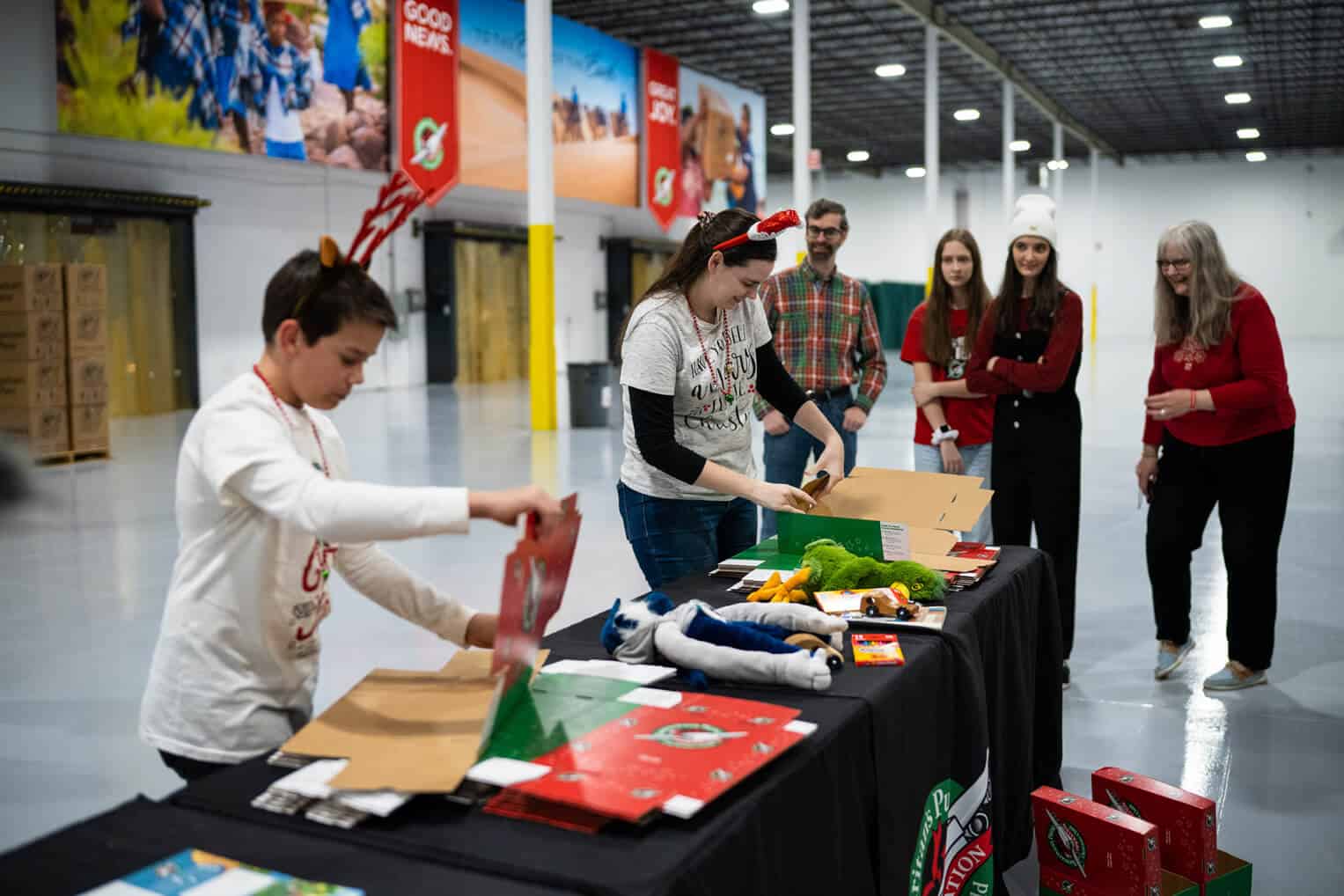 Elizabeth Groff continued the 200 millionth shoebox tour and added a beautiful necklace to the box. Since the piece of jewelry took up very little space, all three items that shoebox packers had voted on by social media were added to the special box—the necklace, a tiara, and a pair of sunglasses.

As the voter-selected items were announced, Elizabeth Groff shared with volunteers how the shoebox gift she received as a little girl first taught her about Jesus. It showed her that she was not an orphan—she was God’s daughter.

Carlos, a K-LOVE Radio DJ, prayed for the 200 millionth shoebox and the girl who will eventually receive it in Ukraine later this December. He also joined in on the processing center line to kickstart the season of preparing shoebox gifts for overseas shipment.

Carlos said, “This is what the church to me looks like. It’s not just a building—it’s us coming together to do something amazing. To know that 200 million kids have gotten just a touch of Jesus and that [these shoeboxes] go to places that most of us never will.”

Elizabeth placed a baby doll in the 200 millionth shoebox at Calvary South Denver in Colorado. Elizabeth said that “wow” items such as dolls and stuffed animals are so important to pack because they instantly capture a child’s attention. 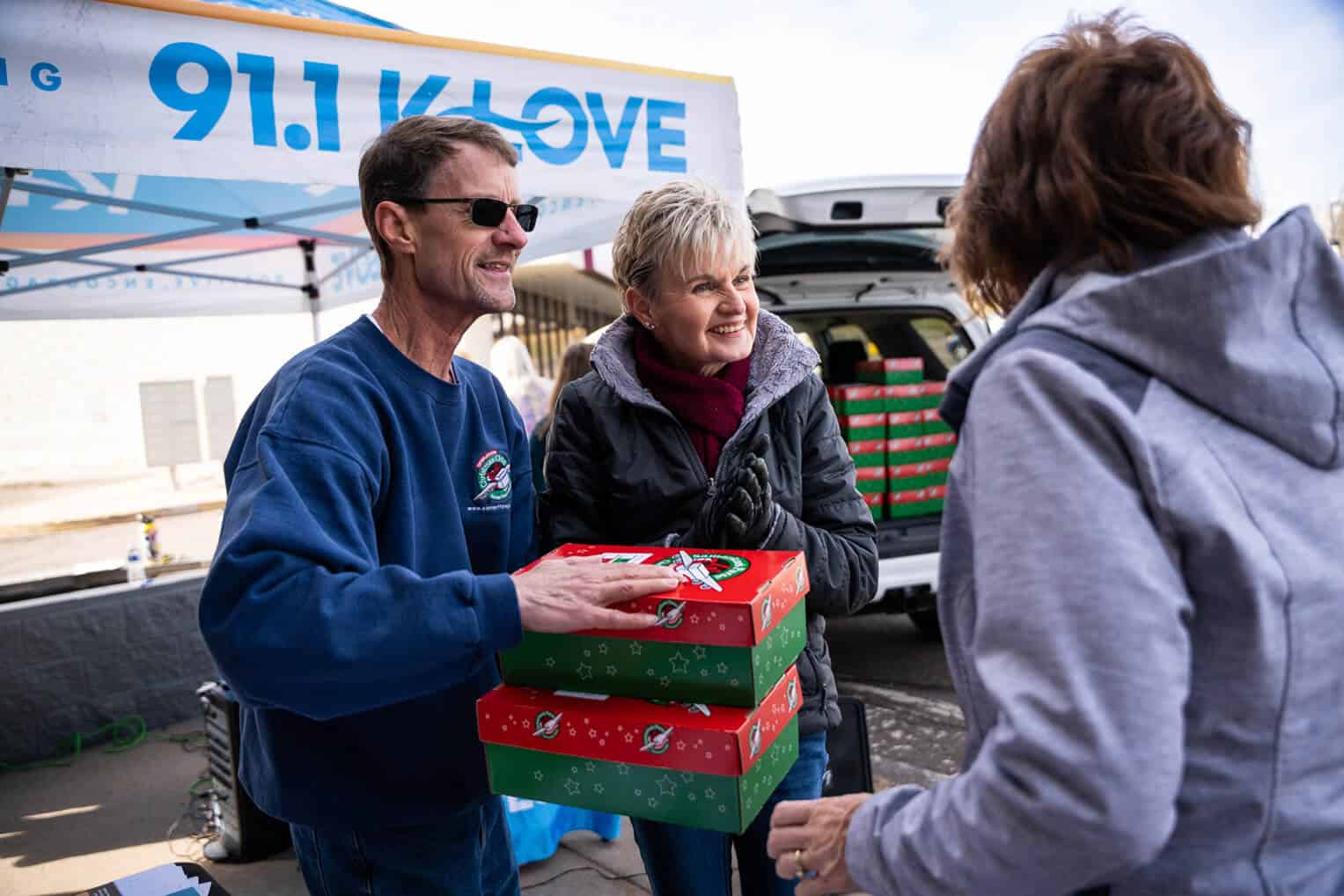 Mark and Debbie Dennis have been Operation Christmas Child project leaders at their church for two decades.

“The ‘wow’ item is the first thing a child will see in the box. It’s something for them to hold onto and take with them wherever they go,” she said. “When they get that special toy, like a baby doll, it’s so exciting. It’s their own, and the beautiful thing is that they didn’t have to do anything to receive it.”

In Colorado, Elizabeth also added items selected by the Samaritan’s Purse international affiliate offices. Those included: a flashlight selected by the United Kingdom; a reusable canvas bag by Canada; a plush koala toy by Australia/New Zealand; a jump rope by Germany; and a pencil sharpener by Korea. 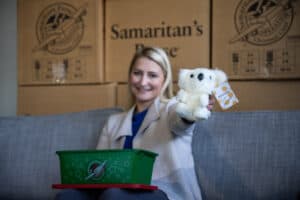 Elizabeth displays one of the “wow” items going in her shoebox gift.

Calvary South Denver hosted the kick-off event on Nov. 12. The church has been a shoebox drop-off location for many years, with this year being their first as a central drop-off location. Debbie and Mark Dennis have served as the church’s Operation Christmas Child project leaders for 20 years.

“It’s not just a child that is touched by a shoebox, but also their family. I think Operation Christmas Child is the greatest ministry out there as far as being able to touch so many lives with the Gospel,” Debbie said.

Students from Colorado Christian University joined in the event to help pack a number of shoebox gifts. Their efforts were much appreciated!

Skip and Amy, K-LOVE Radio DJs and host of the morning show, also came out to celebrate. Amy prayed over the 200 millionth box and for this 2022 season:

“I pray that the children who will be receiving these boxes will know that Jesus loves them—that it will be the beginning of a beautiful relationship. I pray that they will be changed for eternity.” 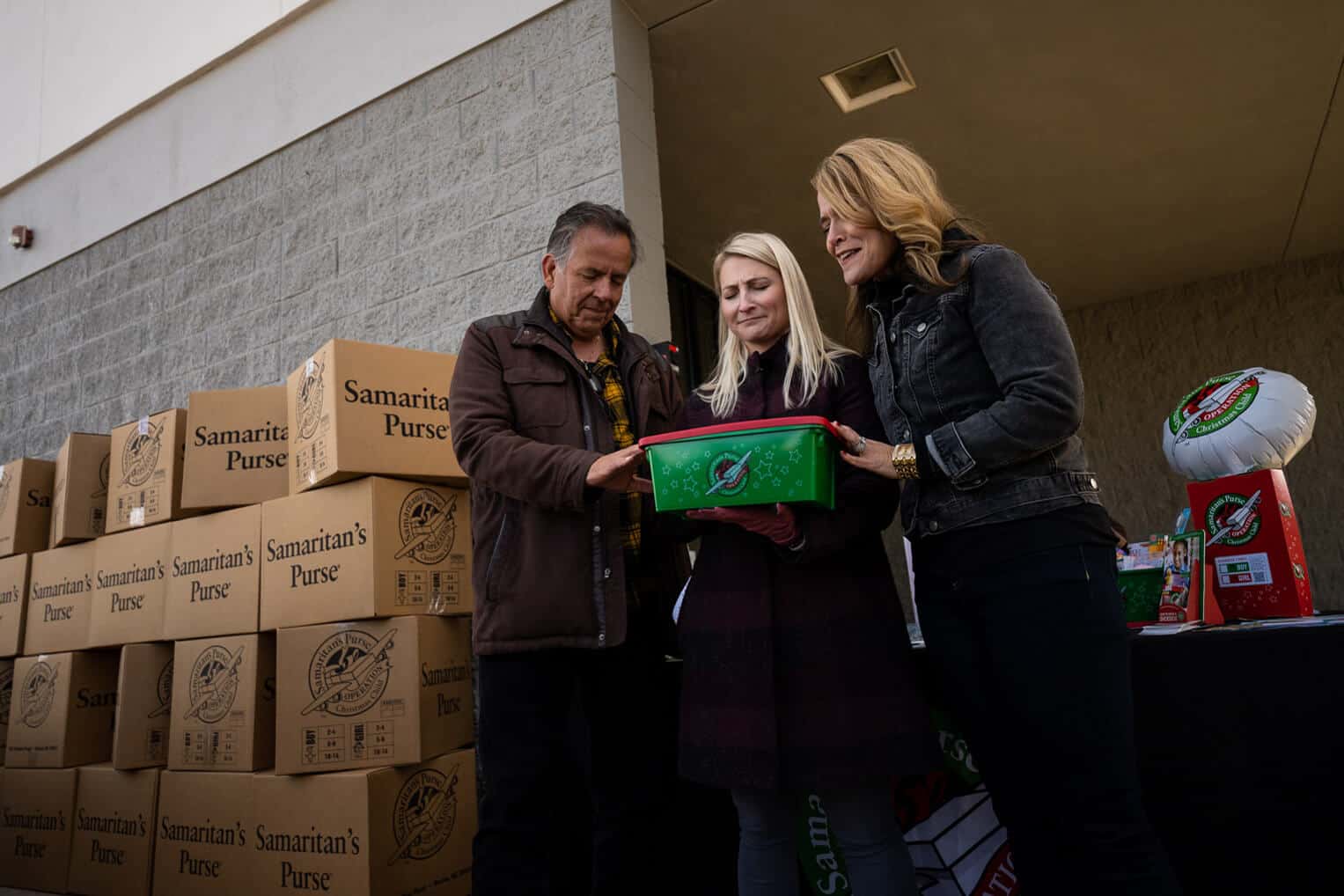 K-LOVE DJs pray with Elizabeth over the shoebox she packed.