Canadian inspired to urge others to pack shoeboxes 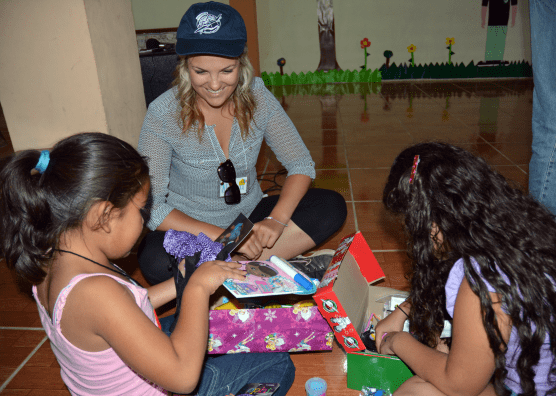 Alisha Rose, 24, has been faithfully packing Operation Christmas Child gift-filled shoeboxes every year for the past 15 years. But she says she’s just getting started, after helping to distribute shoeboxes to children in Costa Rica.

Alisha said: “It’s so cool to see exactly who the boxes go to. Neilyn just looked at the contents, then closed the box. But she kept saying, “thank you, thank you.'”

Alisha packed a shoebox and gave it to seven-year-old Neilyn during a distribution event at Iglesia Pentecostal, a tiny Costa Rican church whose members are mostly poor.

Neilyn, who loved the paint-by-numbers kit in her box, had a simple message for Canadians who support Operation Christmas Child: “I love them.”

After hearing Neilyn’s heart-felt message, Alisha said: “It’s so cool to see exactly who the boxes go to. Neilyn just looked at the contents, then closed the box. But she kept saying, “thank you, thank you.'”

Back in Newfoundland, Alisha and her husband usually pack four boxes, two for each gender. “I always tell people to pack shoeboxes, but now I know more people need to pack,” she says emphatically.

Alisha is taking that message to her church and to the private school where she teaches. “They think this ministry is great,” she says. “They want pictures from this trip.”

Alisha also plans to tell people about the eternal impact of The Greatest Journey, which God has used to bring more than 1.1 million children to faith in His Son since 2009.

“It’s a very worthwhile program,” she says. “It changes kids and give them this opportunity to experience God when otherwise they would not.”