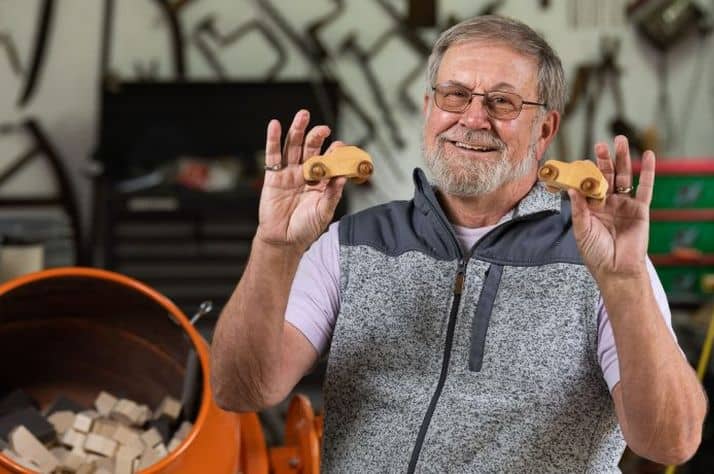 A Michigan man makes wooden cars to put in Operation Christmas Child shoeboxes that will help reach the world’s children for Jesus.


Ken Postema lives in Western Michigan, about 15 miles east of Grand Rapids, on 10 wooded acres that he purchased 51 years ago when he was a senior in high school. Tall white pines, maples, tulip poplars, and hybrid poplars dot the lush, rolling landscape surrounding Ken’s beautifully handcrafted house, which he built himself.

“Some of these hybrid poplars I planted 30 to 35 years ago,” Ken said. “I planted them for a reason, but I didn’t know what that reason was until last year.” 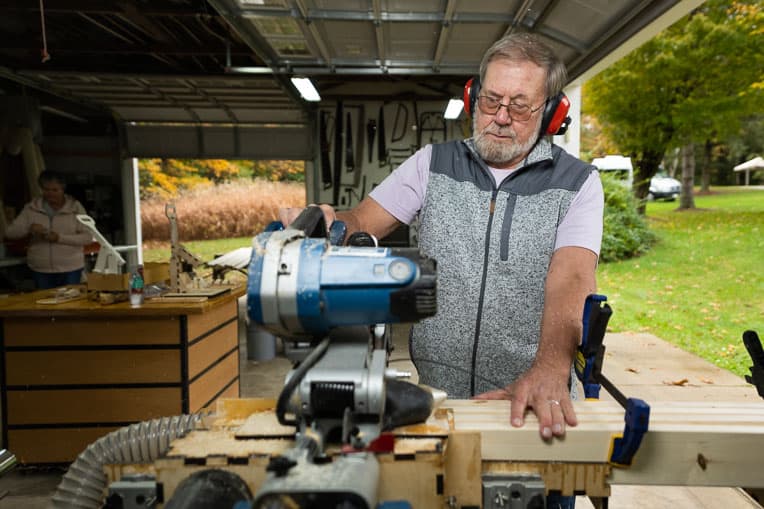 All of Ken’s toy cars are built from hybrid poplars and white pines.

Last year, Ken built 10,000 toy wooden cars, all of them from downed hybrid poplars and white pines on his property. Why would he build so many? For Operation Christmas Child shoeboxes of course. This year he built 20,000.

Ken, 69, is a retired book publisher and has dabbled in woodworking and other creative endeavors his entire life. When he was a teenager he built go-karts and an electric bicycle, and constructed his own bedroom. He learned woodworking from his father, a furniture builder.

“I always looked over dad’s shoulder, and he shared with me many, many ideas, processes, and just the idea of how to work,” Ken said. Now, his dad, Robert, 91, helps put axels and wheels on the cars that Ken builds. Since April, he’s helped assemble over 17,000 cars, an average of around 100 per day.

“it’s given him new strength and a reason to get up in the morning,” Ken said. “He’s encouraged knowing where the cars go and what the mission is all about, which is to help tell kids about Jesus.”

Packing Shoeboxes for the First Time

Three years ago, Ken had never packed a shoebox. He didn’t even knew much about Operation Christmas Child. But when a friend, Steve Shattuck, invited Ken and his wife, Laura, to a shoebox packing party, they caught the vision of reaching children for Christ through shoebox gifts. After the event, they started talking and realized that with Ken’s woodworking skills they could create unique items to put in shoeboxes. But what should those items be? 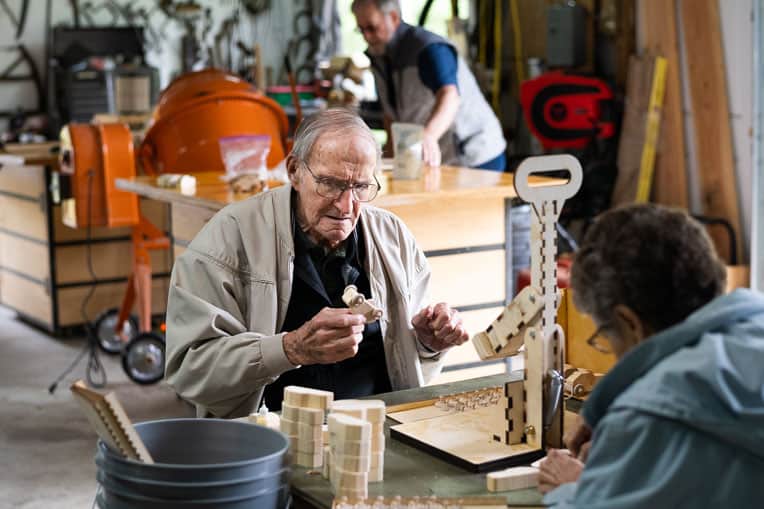 Laura, a retired school teacher, had helped pack shoeboxes when she taught at an alternative high school and saw the impact it had on her students.

“My students came from all kinds of backgrounds,” Laura said. “Many of them very troubled. Some had very difficult childhoods. But the chance to fill shoeboxes was amazing for them. They knew how important it was to have somebody love them. It was awesome!”

Ken and Laura knew they wanted to create a quality item for kids in need and invite others to join them in the process. First, Ken crafted small wooden crosses to be worn as a necklace. He made around 3,000 of them with a laser, but they proved to be very labor intensive, so Steve challenged Ken to instead make a durable, wooden car.

“I thought it was a ridiculous challenge,” Laura said. “But Ken didn’t think it was. And thankfully he didn’t because he figured out how to do it.”

“We start with a log that’s been blown down in the woods. It’s then put on a sawmill and cut into two-by-fours. They air dry for at least six months,” Ken said. “Then they are put through a planer/molder, four sided, and it profiles the car. The molded sticks are then brought to a chop saw where individual cars are cut. The cars then go into a cement mixer that is filled with sanding sponges. Fifteen minutes later, they are all sanded smooth. Next, they go to a custom-built axel drill where I can drill holes for up to 1,000 cars in an hour.” 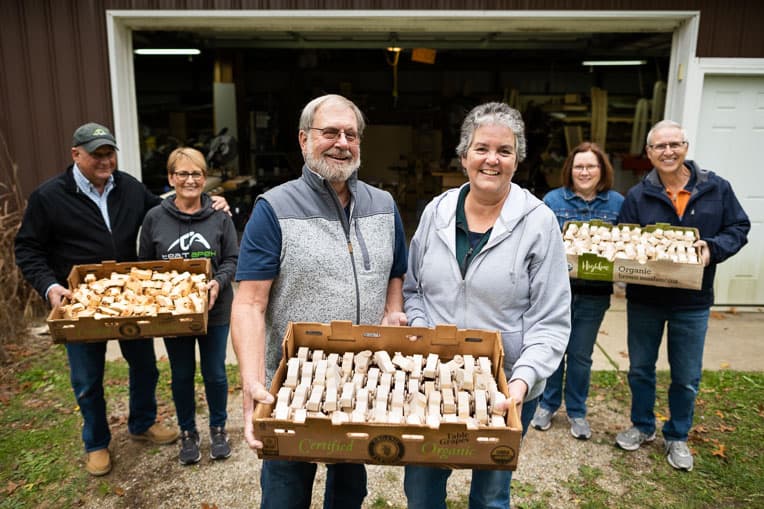 Ken and Laura with members of their small group Bible study who help them assemble the cars.

After the axel holes are drilled, Ken gets others involved. In addition to his dad, Ken’s seven grandchildren and several couples from his small group Bible study pitch in. He gives each of the couples a kit that contains 100 cars, 400 hundred wheels, and 400 axel pegs, which they assemble. Small group leaders Paul and Tammy Cannon assemble around 300 cars each week, and they’ve been able to share the Gospel and the mission of Operation Christmas Child with friends and neighbors who see them putting the cars together in their driveway.

“It’s all about the Gospel message,” Paul said. “My prayer is that these cars will plant a seed in their hearts.”

After the cars are assembled, they are dipped in mineral oil to put a clear finish on them. The oil also protects the cars from scratches and from dirt sticking to them, which is very important to Ken and Laura.

“The cars that we make here might be the first gift that some children have ever received,” Laura said. “That makes it even more important to us that we make the cars very durable and lasting.”

“It’s all about the Gospel message. My prayer is that these cars will plant a seed in their hearts.”

Most of the cars that Ken builds are sent to various Operation Christmas Child Processing Centers to help fill shoeboxes that could use an extra item or two. His cars have thus far reached children in South America, Eastern Europe, Africa, and the Pacific.

Steve, who first challenged Ken two years ago to create 10,000 cars and then doubled the challenge to 20,000 this year, said creating the cars is “all about the Gospel. Every Operation Christmas Child box is a Gospel opportunity and that’s why we’re connected to it.” He also hopes that Ken’s story will inspire others across the country to create unique items for shoeboxes. 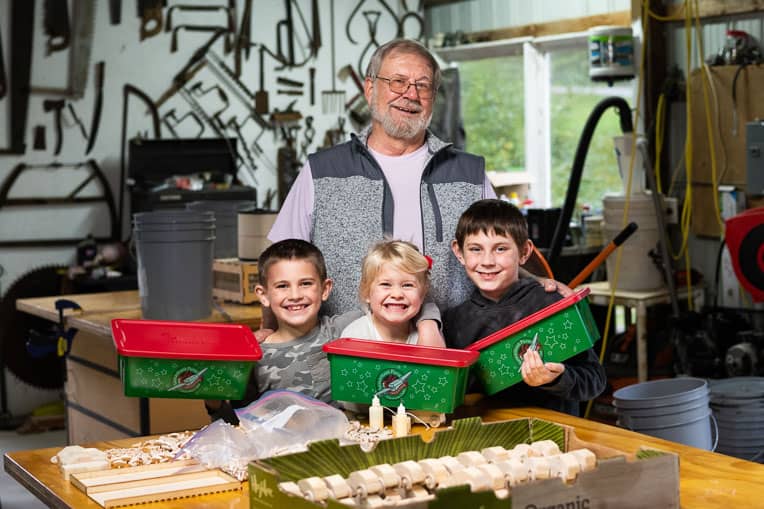 Ken’s grandchildren are also involved in the toy-making process.

“It might not be with cars. It might be making dolls or whatever they are passionate about,” he said. “They can be a part of creating wonderful gifts that create a Gospel opportunity for kids to hear about Jesus.”

Ken, who is already at work building cars for next year’s shoebox season, agrees.

“I hope we can encourage other woodworkers to get involved so we can make a million cars to put in shoeboxes, each one an expression of our love and God’s love for the kids.”

To learn more about how the toy cars are built, please write to Ken Postema at the following address: 10383 36th Street, Lowell, Michigan 49331.

You can be a part of giving children across the globe great joy and sharing with them the Good News of Jesus Christ by prayerfully packing a gift-filled shoebox! Learn how to pack a shoebox. National Collection Week is Nov. 15-21. You may also be interested in volunteering at the Calgary processing center.

Operation Christmas Child is a project of Samaritan's Purse.
Pack a Shoebox
How to Pack a Shoebox
What to Pack in a Shoebox
Shoebox Labels
Pack a Shoebox Online
About
Mission & History
The Journey of a Shoebox
To the Ends of the Earth
Evangelism & Discipleship
The Greatest Journey
Latest Stories
Videos
Media Resources
Frequently Asked Questions
Resources
Project Leaders
Family (& Children)
Students
Churches
Tips for Packing Parties
Year-Round Packing Ideas
View All Resources
Get Involved
Pack a Shoebox
Lead Your Church or Group
Volunteer
Become a Drop-off Location
Pray for Operation Christmas Child
Ways to Give
Mission Trip Projects
© Copyright 2022 Samaritan's Purse Canada. All rights reserved.