A Teen Club in Ukraine Studies the Bible and Motorbikes 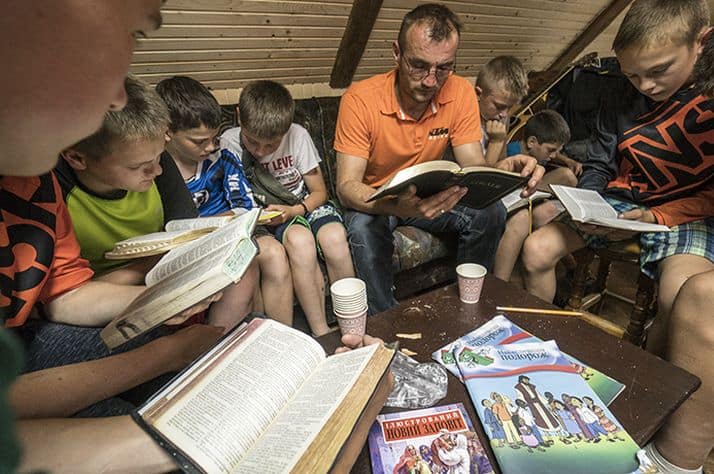 A Christian discipleship group in western Ukraine uses The Greatest Journey to help boys learn to follow the Lord.

Roman Shcherbiuk’s motorcycle shop is a favorite spot for boys in the small town of Bili Oslavy, Ukraine. Crammed tight with six motorcycles and one motorbike, Roman fixes bikes here to sell them for a profit. But far more important, once a week the shop becomes a classroom for The Greatest Journey, the Bible study course designed for children who receive Operation Christmas Child shoebox gifts.

Nine boys in their early teens—all from unbelieving families—comprise this motorbike discipleship club. On Tuesdays, they huddle around Roman for an hour as he teaches them how to ride. They trade off one helmet, jersey, and motorbike so each student gets seven minutes to ride each week.

Despite the thrill of motorbikes, the boys’ favorite part of the club is the Bible study.

Vasya, a motorbike club member, became a Christian at age 14 at Bible camp. His life began to change. 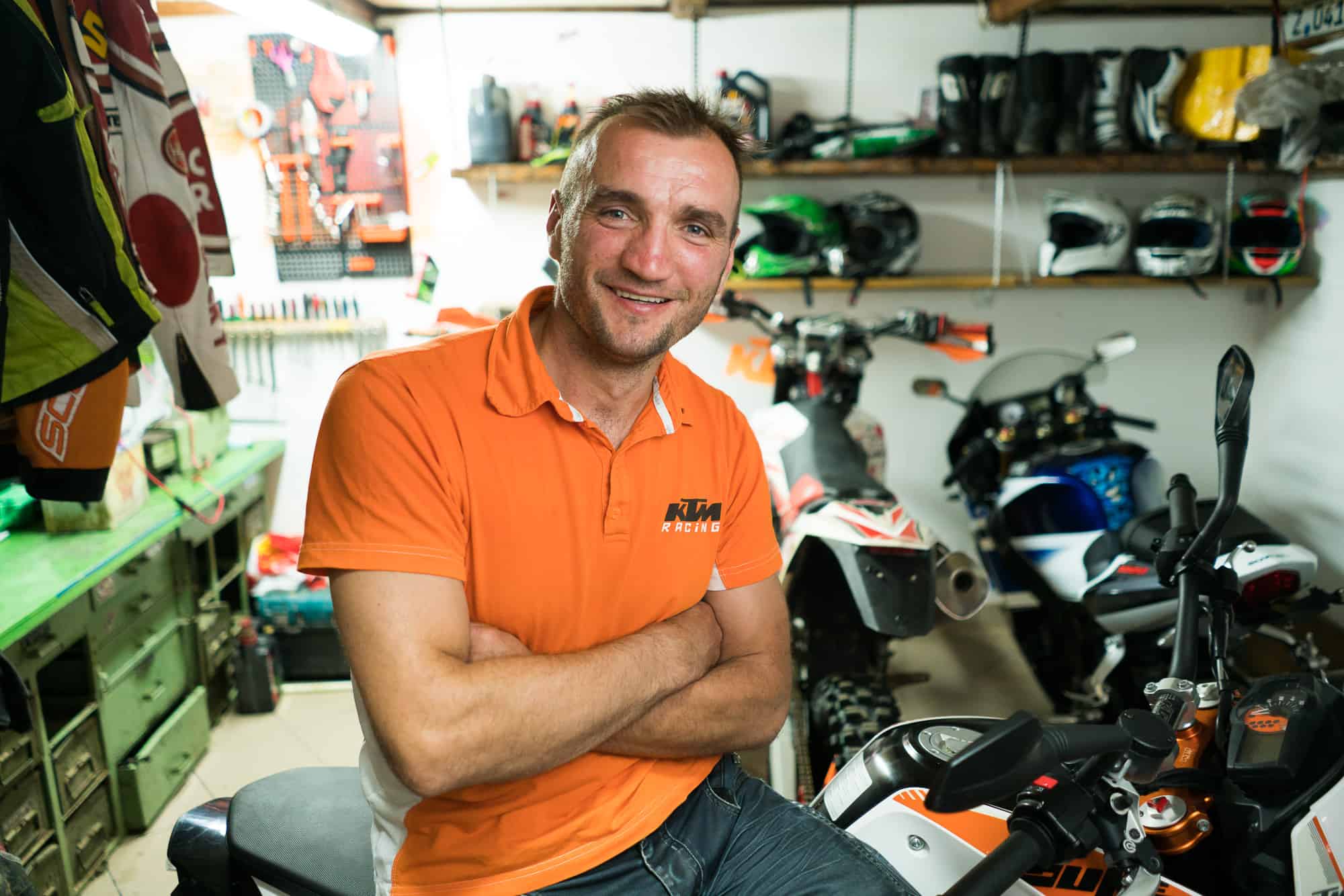 Roman started a motorbike club in order to disciple teenagers through The Greatest Journey.

“Before accepting Jesus, I used to have a bad circle of friends. But after I changed my friends to those in this club, I decided I didn’t need to smoke, drink alcohol, or say bad words.”

Vasya has since told his old friends all about what he is learning through The Greatest Journey. “I tell them that there is salvation only in Jesus Christ and they must accept Him into their hearts to be saved.”

Roma (short for Roman), another participant in The Greatest Journey course, fondly remembers the items in his Operation Christmas Child shoebox gift. Amid the t-shirts, pants, and coloring books, his favorite items were the toy cars he found inside. The now 14-year-old accepted Christ two years ago at Bible camp, and he now actively sharing the truths he is learning in The Greatest Journey with his parents.

Although not every boy in the group is a Christian—yet—their teacher Roman sees all of them maturing and learning. They are all hearing the Gospel.

“I see a lot of change in their hearts and what is very unusual is that in school they are not successful in their classes, but for The Greatest Journey they are very good students.”

Roman, born into a Christian family, has also been around motorcycles his whole life. When he was young, his father had a Soviet model and Roman often rode with him in the side car. By the age of 15, he was riding his own bike winter and summer alike. He had no other transportation. 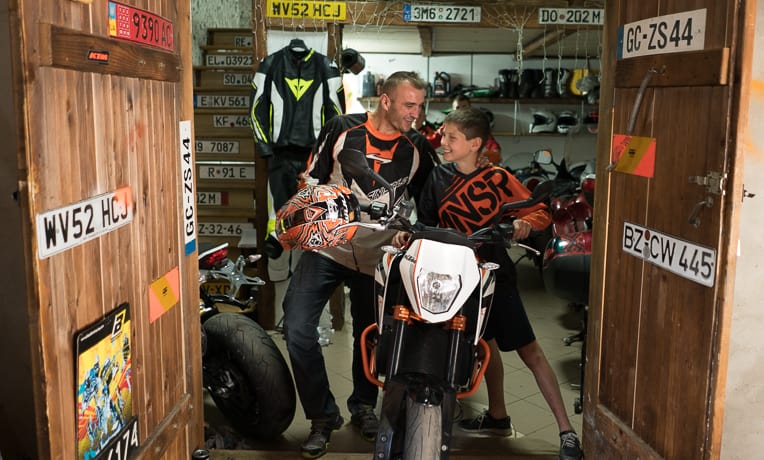 Roman enjoys teaching about bikes and the Bible.

The idea for the club started when Roman’s wife Julia asked him to spend time with the boys who were too old for Sunday school. Since churches in this part of Ukraine do not offer programs for teens or youth, Julia, as Sunday school director at their church, began spending time with older girls in her free time. Roman began doing the same with the boys.

Initially it was just a social time. The boys gathered in his shop and took turns taking their pictures on his various motorcycles.

But after a month, Roman realized that it would take more than that to keep them off the streets. He knew he needed to reach them for Christ and His kingdom.

“I want to touch their hearts,” Roman explained. So, he added Bible study to the club.

Sergiy Kachan, national coordinator for Operation Christmas Child in Ukraine, said, “The Greatest Journey is one of the best evangelistic programs we have in Ukraine.” It is filling a need for ministry to children and youth countrywide.

“It was difficult for me to understand why our churches were full of older people,” Sergiy said. “In recent years, Ukraine has become more like the rest of the world with more children and teens coming to Christ.”

The motorbike discipleship club is a small part of how this is happening. Roman says of his students: “I pray for all of them to live for God. I want them to not only visit church, I want them to be alive Christians.”

Please pray for thousands of The Greatest Journey classes worldwide to train boys and girls to follow Christ and share Him with others. 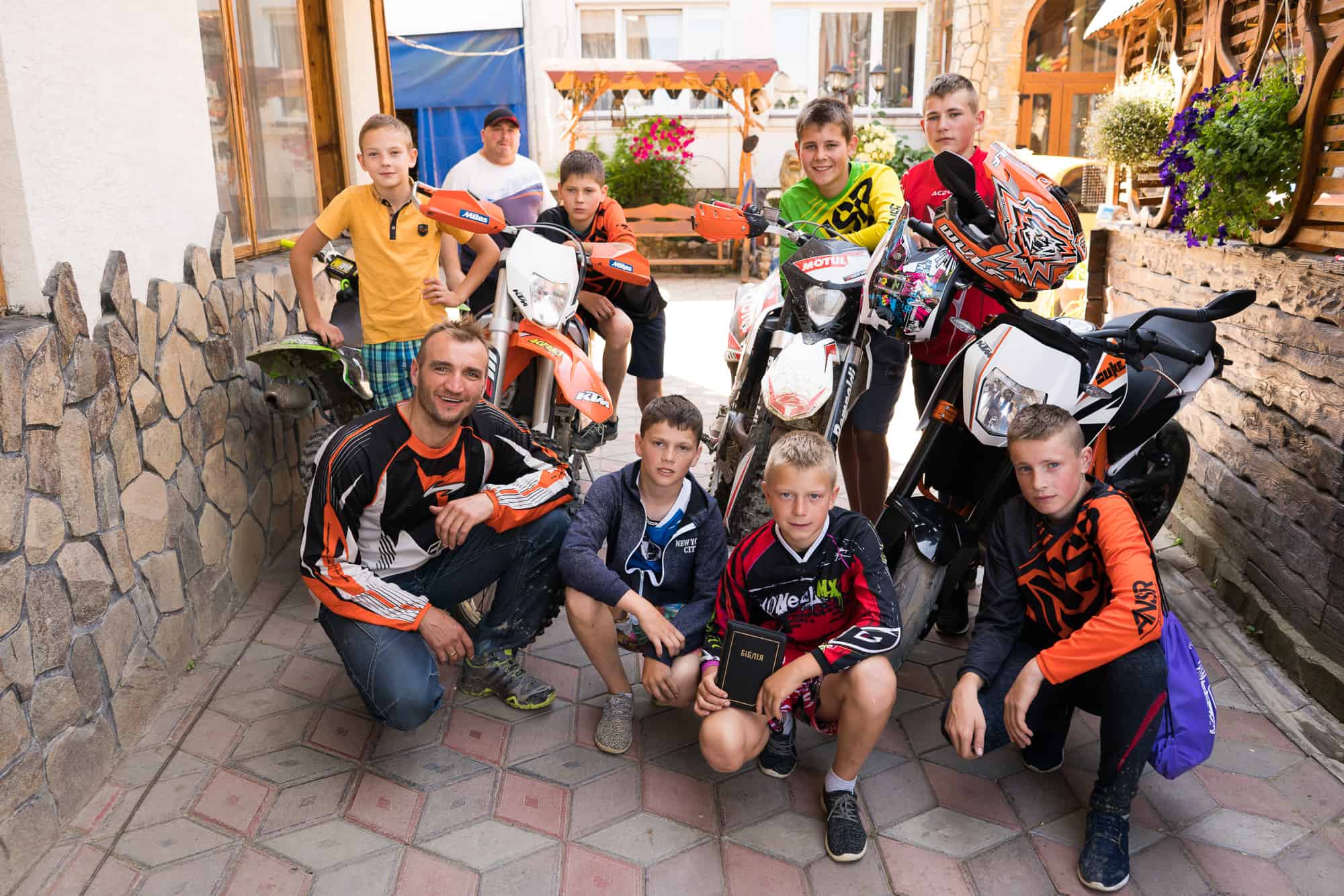 Please pray for the teenagers who are studying the Bible with Roman. Pray that they will grow in their relationship with Jesus Christ.

—
Operation Christmas Child, a project of Samaritan’s Purse, delivers gift-filled shoeboxes to children in need in more than 100 countries around the globe. The Greatest Journey is a 12-lesson discipleship course for children who have received shoebox gifts.