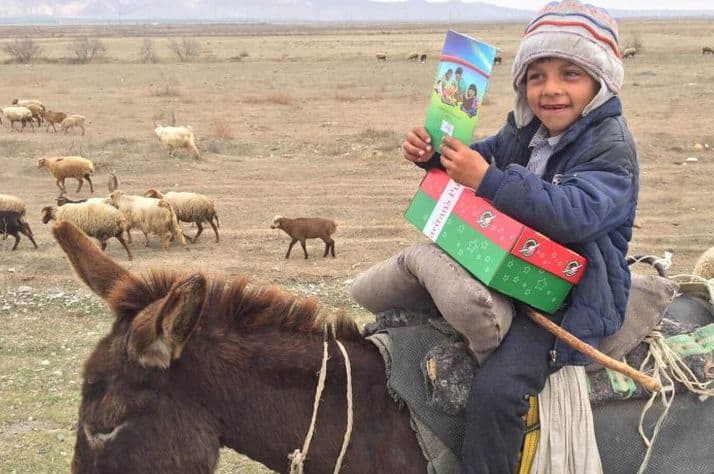 A simple drive through the countryside can become something special.

Yusif*, a volunteer leader in Central Asia with Operation Christmas Child, was traveling with several team members to a ministry meeting when he spotted two shepherd boys tending their flock near the highway. Remembering that he had some gift-filled shoeboxes as well as copies of The Greatest Gift Gospel booklet with him, Yusif stopped the car. While this was not a typical outreach event, he and his team members felt compelled to pause in their travel, encourage the boys, and bless them in a special way.

“Did you want something, sir?” asked the youngest boy in a rather grown-up tone. “Why did you stop here?” 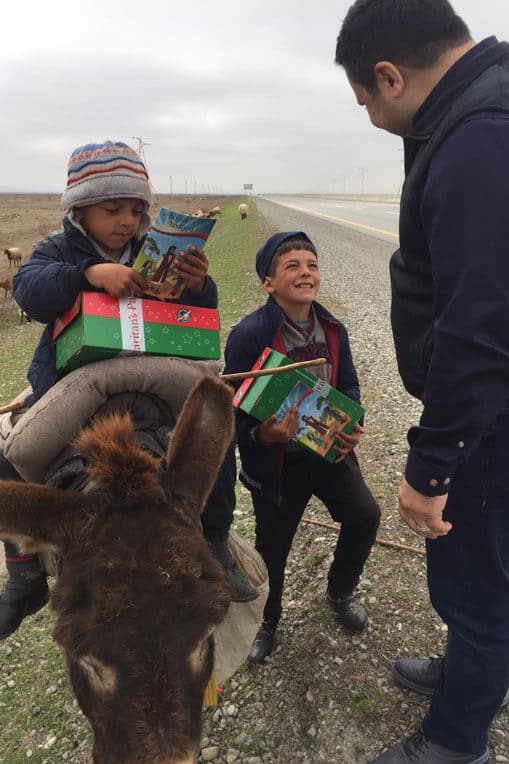 The two brothers take a break from tending their sheep to talk to Yusif on the side of the road.

Yusif explained that God wanted him to give a gift and a small book about His Son, Jesus Christ, to these two brothers, ages 5 and 7.

“Why in the world do you want to give me this box?” the younger one inquired again. Though just 5, he talked—and rode his donkey—like an adult.

“This is just a gift for you from God, who loves you and wants to show His love through this gift,” Yusif said.

The boy took the shoebox gift, pressed it to his chest, and turned to look toward his older brother who was tending the flock a distance away. Yusif noticed his concerned glance and assured him that there was a gift for his brother, too. The boy then called to his sibling who quickly came riding toward them.

Bringing Joy to Those Working Hard to Survive

Yusif grabbed a shoebox gift and a copy of The Greatest Gift and went to meet the older brother. Opening the booklet, he started reading to the boy and explained that the Lord created the world—including mankind—because of His great love. Yusif gave him the shoebox gift and said, “This gift is a sign of His affection to you—He loves you.” 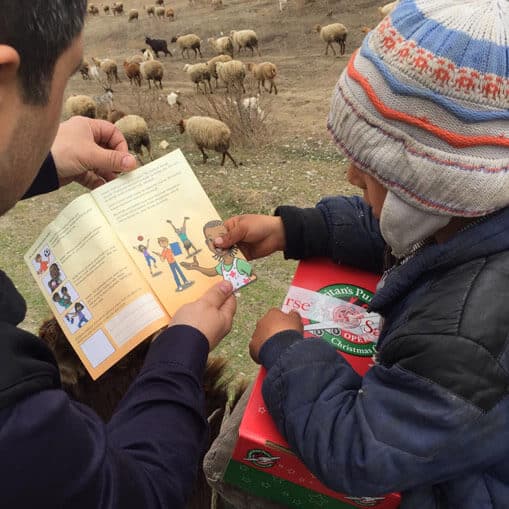 The older boy took the box and held it tight, much like his younger brother had done with his. Then, the younger one began to read the booklet as he sat atop his donkey.

“The boys got excited because no one ever gave them gifts,” Yusif said. “In this region, even young boys have to work hard to survive.” He explained that parents expect much of their children, entrusting the care of large flocks to them, despite the threat of wild animals and people with evil intent. “The Lord sent us into their reality to say that He loves them,” Yusif said.

The team prayed over these boys as they left. Later, they prayed again that a seed was planted that would grow in the hearts of the young shepherds. Now, Yusif continues to pray that he will see the boys when he goes that way again, and he also asks God to help him drive slower so he will notice more people like them.

“Many thanks to Samaritan’s Purse for taking care of the children in need, so that they would come to know the love of God,” Yusif said. “It’s wonderful that, through these gifts and books written in the children’s heart language, they can find out how dear they are in the sight of God and that there is hope for eternal life with Him.”

Please pray for national teams worldwide, who, like this one in Central Asia, help proclaim the Gospel of the Lord Jesus Christ in more than 100 countries. Ask God to use Operation Christmas Child shoebox gifts to create opportunities for even more children to hear and experience Good News and great joy. 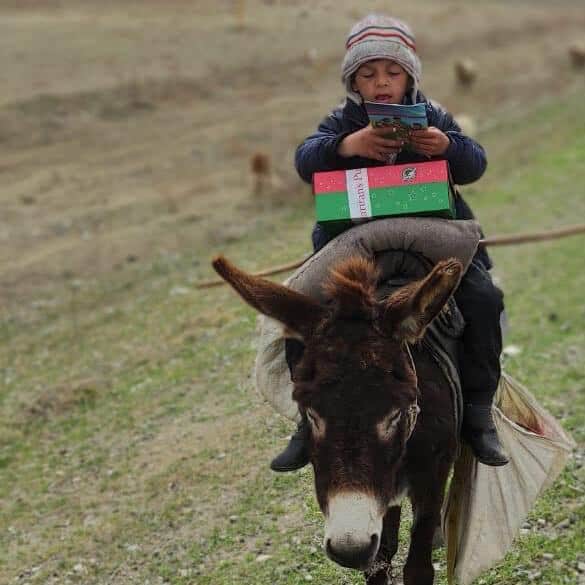 The younger shepherd is enthralled with his new book about Jesus, the Good Shepherd.

Operation Christmas Child is a project of Samaritan's Purse.
Pack a Shoebox
How to Pack a Shoebox
What to Pack in a Shoebox
Shoebox Labels
Pack a Shoebox Online
About
Mission & History
The Journey of a Shoebox
To the Ends of the Earth
Evangelism & Discipleship
The Greatest Journey
Latest Stories
Videos
Media Resources
Frequently Asked Questions
Resources
Project Leaders
Family (& Children)
Students
Churches
Tips for Packing Parties
Year-Round Packing Ideas
View All Resources
Get Involved
Pack a Shoebox
Lead Your Church or Group
Volunteer
Become a Drop-off Location
Pray for Operation Christmas Child
Ways to Give
© Copyright 2023 Samaritan's Purse Canada. All rights reserved.