Siblings graduate The Greatest Journey and transform their home in Babylon, Namibia with the Gospel

God is using The Greatest Journey discipleship program to change one neighborhood in southern Africa. 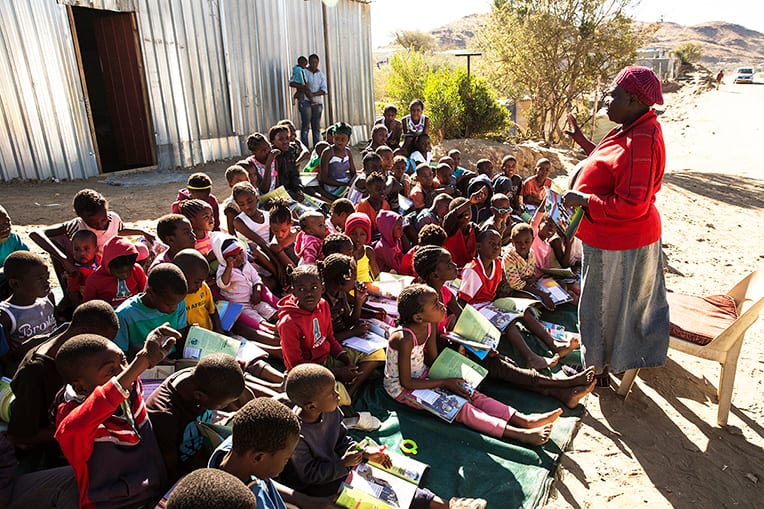 Willemine teaches the greatest journey just outside her front door.

Babylon is a tough neighborhood. It’s part of a larger community called Katutura, which literally means “the place nobody wants to stay.”

This area outside the capital of Windhoek was established when apartheid flourished in the country. Those deemed “black” or “colored” residents arrived here after bulldozers destroyed their previous settlement next to a “white” neighborhood.

As they rebuilt their corrugated metal homes in this new area, Katutura got its name. Many families here have no running water, electricity, or toilets in their homes. They use public restrooms and fetch water from a pump in the middle of their community. Kids do their homework by candlelight.

‘God, Take Us Out of Babylon!’

One day a couple years ago, Babylon resident Willemine Shiningua paused a moment in her busy day to watch kids playing soccer on the dirt road in front of her home.

She was grieved by the behavior she saw. Bullying, name-calling, and overall rudeness characterized the players. Burdened for these children, she began to pray for them.

Golden Turika’s oldest two children, Jessica and Innocent, were among the soccer players. As a mother of six children from different fathers, Golden worried about who her oldest two were becoming.

Jessica was stealing money from her small business that sold bread, chips, and candy on the street. Innocent was staying out all night and getting involved with the wrong crowd. Discouraged, Golden prayed, “God, take us out of Babylon!”

The Beginnings of Change

Willemine, concerned about the soccer games she witnessed on her street, asked God, “What must I do?”

Through a friend, she learned about Operation Christmas Child and The Greatest Journey, the Samaritan’s Purse discipleship program used with shoebox recipients. Excited about the opportunity, she brought 200 shoebox gifts to Babylon and distributed them to the children, sharing the Gospel as she did so. Jessica, 13, and Innocent,12, were recipients. 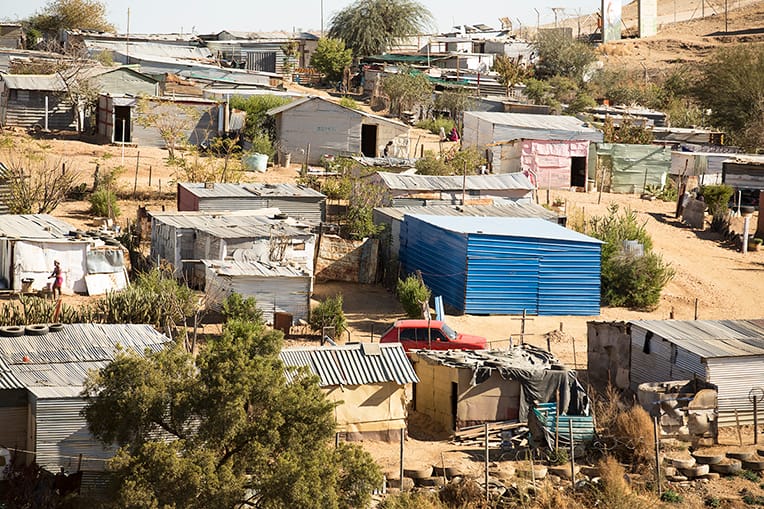 Babylon is part of katutura which means “the place nobody wants to stay.”

“God, take us out of Babylon!”

Innocent was delighted to find a T-shirt, cap, belt, shoes, and pencils in his gift. But he said, “My favorite thing in the box was a yo-yo.”

Jessica remembers the day well. “I was very happy, jumping around the house,” she said. “I was having a smile up to the ear.”

She loved the small notebook she found inside. Jessica said, “My mom, when she saw the box, she said, ‘That’s God!’”

Golden’s acknowledgment of God was, in itself, a breakthrough. Since her kids were babies, they stayed with their grandmother because Golden was an alcoholic—often leaving for a month at a time to indulge her habit. As the children began to grow, their grandmother rallied them to pray for their mother. 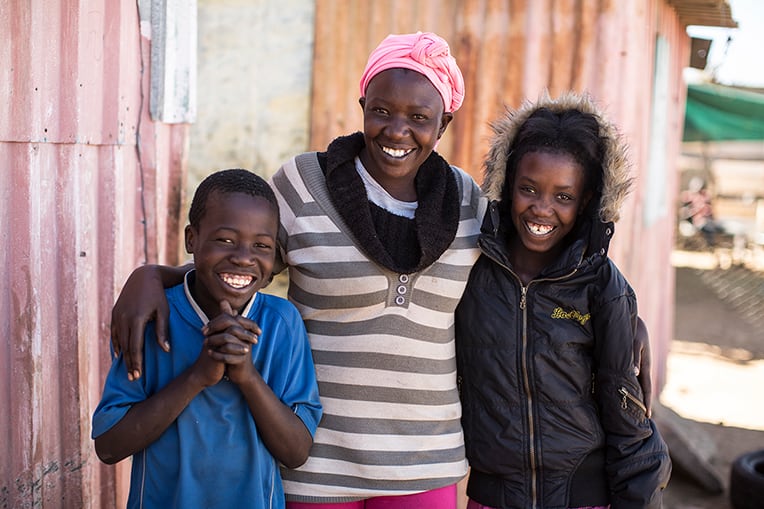 Jessica and Innocent began to learn more of what those prayers meant when Willemine invited them to come to her small living room for The Greatest Journey classes. They readily began attending with 35 other children in order to learn more about Jesus. As they studied the seven days of creation and stories about people like Zacchaeus who met Jesus, both received Christ as their Savior and Best Friend.

“When I accepted Jesus, I went the right way. I was born again,” Jessica said.

Willemine said of the siblings, “They took it very, very serious. Every Sunday they go with me to church. They changed.”

Jessica and Innocent put into practice what they learned in The Greatest Journey and began sharing their faith with others.

“Wherever they are, they are preaching the Gospel to others now,” Willemine said. Some of these friends are joining them at the discipleship classes.

The change in their lives was noticed at home as well. Golden became a Christian—as God used the children’s witness to draw her to Himself— and Jessica said, “She’s now a woman of God.”

Golden is amazed at the transformation of her children. “They are the ones who teach me the Bible,” Golden said. She mentioned that when they don’t have food, Innocent will say, “Let’s come together. Let’s pray.”

Willemine sees his influence as well. “Innocent is a very great leader,” she said.

“My mom changed because we prayed.”

Now instead of stealing and bullying, Jessica and Innocent are evangelists in Babylon. 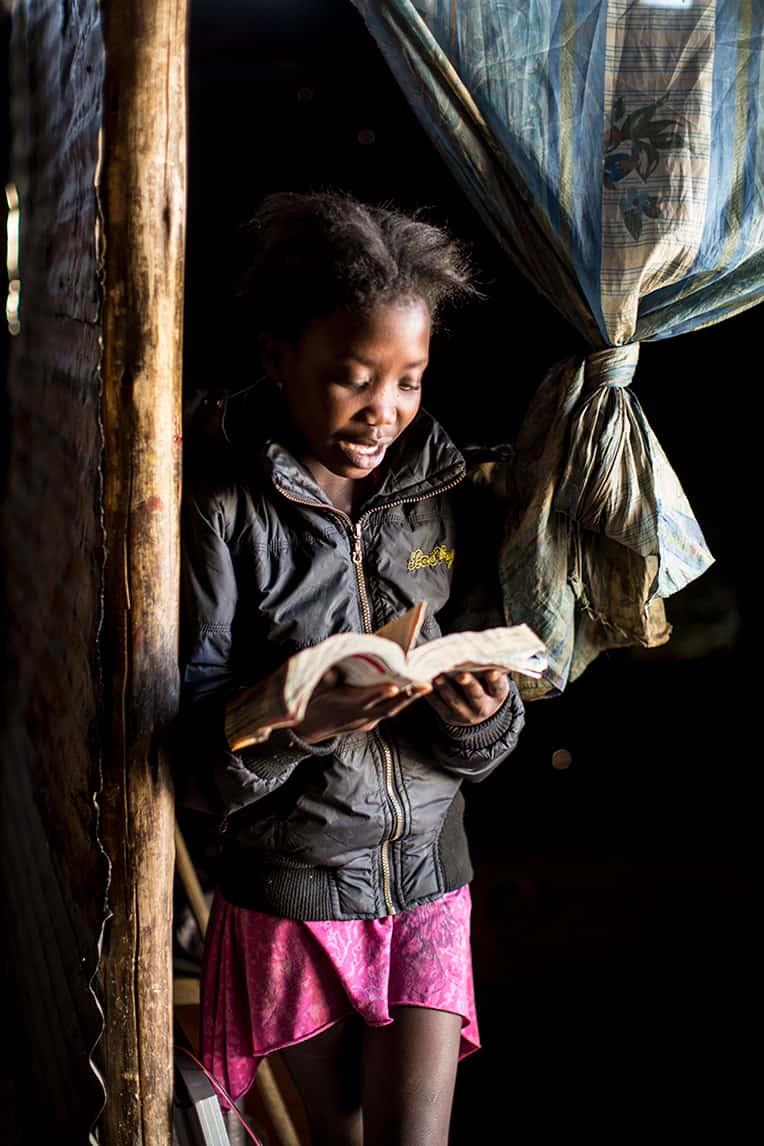 Jessica reads from the Bible she received at her graduation from The Greatest Journey.

They want to continue serving the Lord throughout their lives. Jessica, now 14, wants to be a doctor. She said,

“I want to bless the people who are ill or sick, and I also want to help my family or my friends.” Innocent, now 13, wants to study law because “a lawyer is a person that solves problems.”

Through the lives of these two children, God answered both Golden’s and Willemine’s prayers in very different ways. Willemine prayed, “Father God, I want to make a difference in the area where I am,” and God allowed her to pour into the lives of the soccer players on her street through The Greatest Journey.

But for Golden, God’s answer was no. He didn’t take her family out of Babylon, but instead transformed them so they can influence their community for Christ.

“If you see Babylon in the Bible, it was a place where people were just doing bad things. Babylon was a very bad place,” Willemine said. “The reason God put me here is to make a change in this Babylon and to make it a place of the Lord.”