"Such a good tool for evangelism" 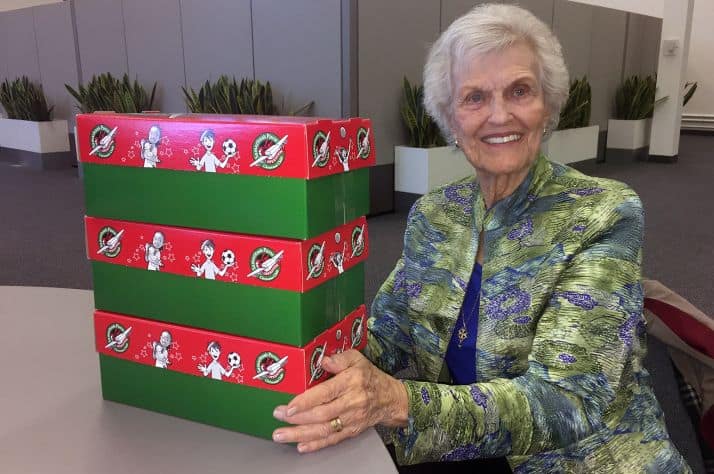 It’s not hard to understand why Esther Fitzstevens, despite being 89, still packed 50 Operation Christmas Child shoeboxes this year for children in need around the world. Esther was present in 1993 when Samaritan’s Purse adopted the program and gave gift-filled shoeboxes to children in war-torn Bosnia.

“Operation Christmas Child is such a good tool for evangelism,” says Esther, who spent about two years in Bosnia, with husband John. They operated a Samaritan’s Purse home for impoverished women who were widowed, or who were raped and became pregnant, during that country’s vicious civil war.

Esther packed this year’s shoeboxes in memory of John, an Operation Christmas Child supporter who died a few months ago. She lined one wall of her apartment in a seniors’ residence with empty boxes, then bought all the contents.

Esther wasn’t sure she’d find time to get all the packing done in time. But she says God granted her that time when the usually very active Esther contracted the flu and was confined to home for a week.

“I enjoyed every minute of that packing experience because of my dear husband,” Esther says. 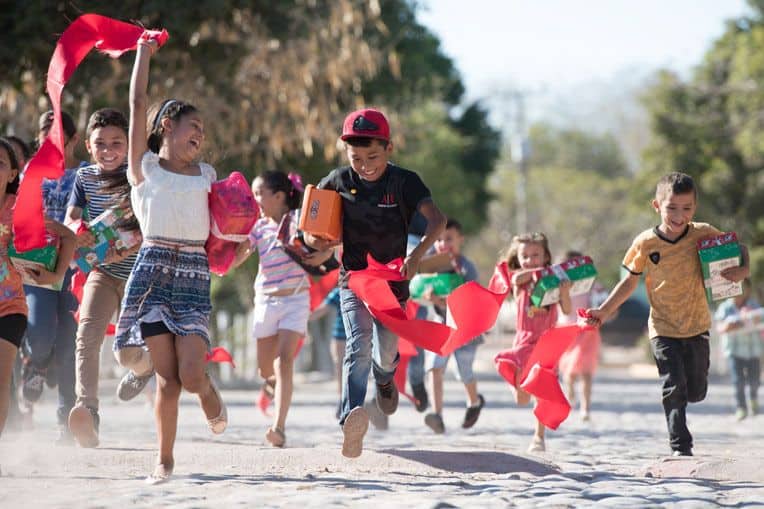 There are over 157 million worldwide who have received good news and great joy through a gift-filled shoebox.

Esther and John spent most of their lives in missionary work, and she can easily recall how God worked through an Operation Christmas Child shoebox to miraculously provide for two children in Vietnam.

The Fitzstevens attended a shoebox distribution event at a Hanoi orphanage when the director called them over to see the contents of one box. Given to a boy who had a twin brother, the box contained two of everything, including two T-shirts and two sets of identical toys.

“The director said ‘isn’t this amazing?’ I said ‘no, because I have an amazing God and He knew exactly who was going to get this box. He put it on the shoebox packer’s heart to put two of everything inside.’”

Mentioning the God of the Bible in communist Vietnam could be dangerous, so Esther wondered if she and John would be invited back to the orphanage to distribute shoeboxes. But they were the next year “and the director ran to greet me. She was moved (as she remembered the twin boys and their special shoebox).”

Jesus’ love can be shown to kids, families, and communities through these boxes.

During their time in Vietnam, the Fitzstevens ran a boarding school for 70 children of missionary parents. As Esther found herself doing mundane tasks like sorting laundry, she wondered how this could possibly be part of her calling as a missionary. But after some prayer and Bible reading, she concluded “the Lord is telling me to be content with what I was doing.”

That lesson would serve her well in Croatia when Esther spent many hours washing diapers. During their time running the Samaritan’s Purse home for widows and pregnant rape victims, 66 babies were born.

“I used to grumble about it because it wasn’t what I came to Croatia for,” Esther recalls. “Then the Lord told me, ‘remember when I taught you to be content (in Vietnam)? That was your preparation for this.’”

Esther did much more than laundry. Samaritan’s Purse president Franklin Graham, in his autobiography Rebel with a Cause, wrote “often Esther sat up late at night with the girls in her arms. These young women sobbed as they told stories that made Esther sick to her stomach.

“Esther comforted them as only she could, and John was a strong father figure that many of them had never had before. The girls received lots of tender loving care, but more important, they heard about Jesus. Many of these young mothers came to know Him as their Savior.”

As Esther continues to faithfully support Operation Christmas Child, the elderly woman has a message for Canadians wondering if packing shoeboxes is worth the effort.

“These shoeboxes show there are people who want children to feel loved,” she says “Jesus’ love can be shown to kids, families, and communities through these boxes.”