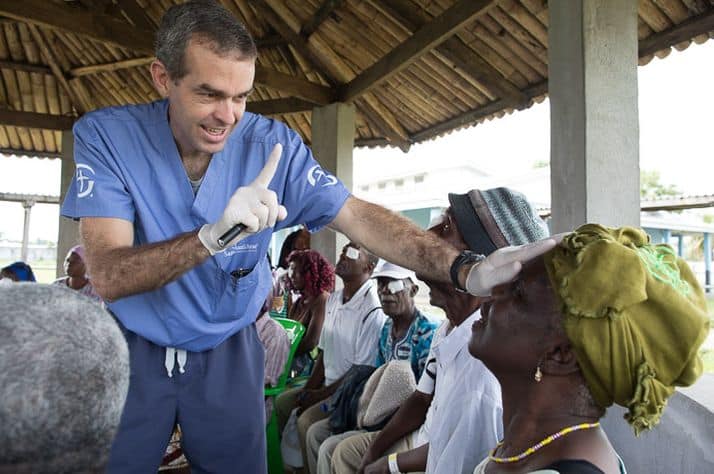 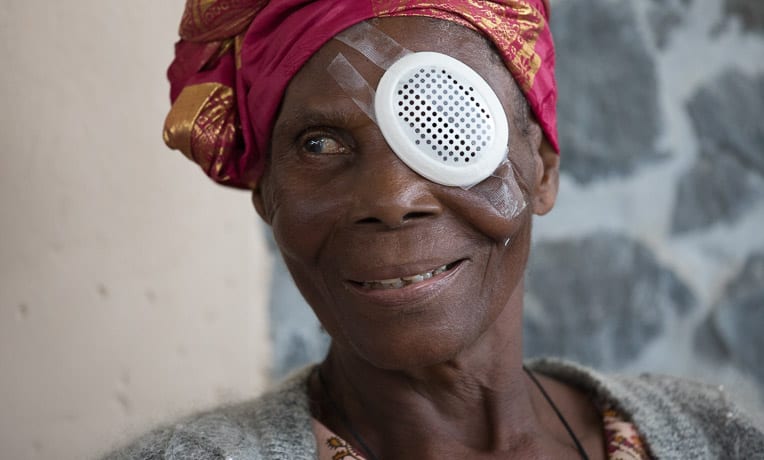 Catherine* spent about three months in an Ebola Treatment Unit.

*Catherine’s face darkened as she thought back to the time in 2014 when Ebola claimed the lives of so many. “The dead were more than the living,” she recalled, eyes brimming with tears.

When Catherine’s son became sick, she cared faithfully for him, but eventually he succumbed to the virus. Soon she began feeling ill, and immediately recognized the horrible symptoms. The 68-year-old widow spent nearly three months in an Ebola Treatment Unit (ETU).

Finally, Catherine was cleared of the virus and allowed to return home, but her community did not welcome her. Fear of Ebola was running high and, like many other survivors, she was ostracized by her neighbors. The trauma of having suffered through Ebola and the grief of losing her son was compounded by loneliness and isolation.

Even after a person has been cured of Ebola, the effects of the virus can linger in the body for years. One of these effects is cataracts—a condition of the retina that causes cloudy, dark vision.

Earlier this year, Samaritan’s Purse launched a program in Liberia to provide cataracts surgery for Ebola survivors. Through a simple outpatient procedure, surgeons are able to restore sight in the affected eye and offer hope to people who have endured unthinkable trauma.

“The survivors have been stigmatized for so long,” said Karen Daniels, manager of the cataract program. “They’ve had so many challenges and so much loss.”

When Catherine received word from Samaritan’s Purse that she could come to ELWA Hospital outside Monrovia for cataracts surgery, she was overjoyed. She became one of 84 patients operated on by our team of experienced surgeons, ophthalmologists, and nurses over a week’s time in September. Catherine left the hospital with better sight and a thankful heart. 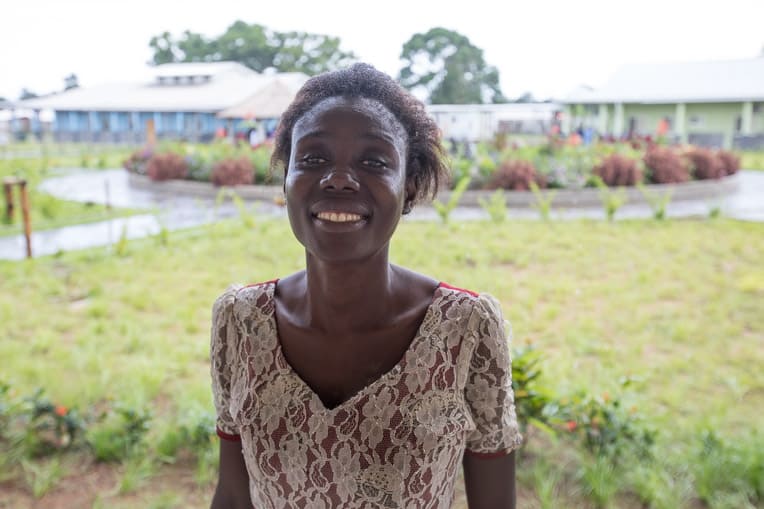 Bethany* had never clearly seen the face of her daughter until our doctors removed her cataracts.

Each day, a group of post-operative patients left the hospital with a white gauze patch over one eye. And each morning they returned to the palava hut waiting area to have the patch removed.

Dr. Ben Roberts—an ophthalmologist who helped performed the surgeries—went from person to person, gently peeling away the medical tape and lifting the gauze. One by one, the patients blinked in the bright sunlight and wiped away tears.

Many people burst into spontaneous songs of praise or prayers of thanksgiving. Others sat quietly, fully taking in their surroundings for the first time in years.

For a young mother named *Bethany, the most beautiful sight was the face of her 15-month-old daughter *Abigail. Bethany had cataracts in both eyes, so Dr. Roberts and his team performed bilateral surgery. Darkness had obscured her vision for more than two years, so when the gauze was lifted, Bethany saw Abigail clearly for the first time. 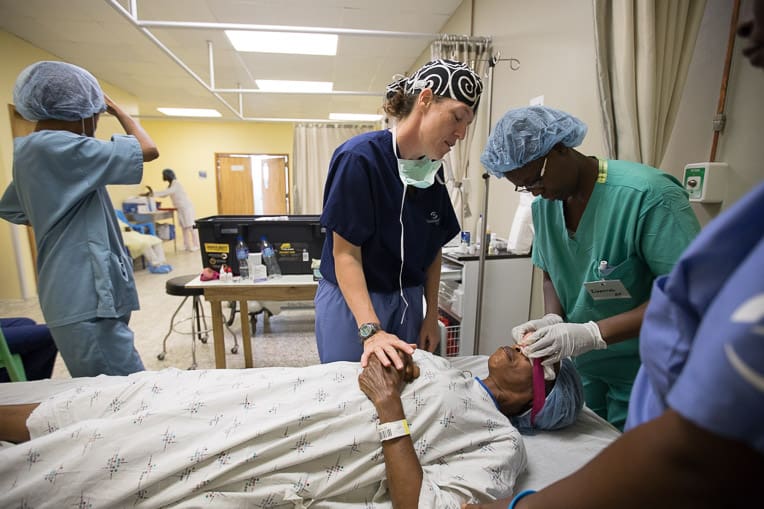 Our medical team operated on 84 patients in Liberia.

“I tell Samaritan’s Purse ‘thank you,’ because since I came from the ETU they were not afraid of me,” she said. “They’ve been coming to my house, talking to me, comforting me, encouraging me.”

Abigail has two older siblings at home, and Bethany is thankful for the restored vision that will help her take care of her children.

Jesus Is the Light

Another patient, Fatima*, was terrified at the prospect of surgery, so Thomas Benson, a psychosocial counselor and Samaritan’s Purse staff member, encouraged her from God’s Word. 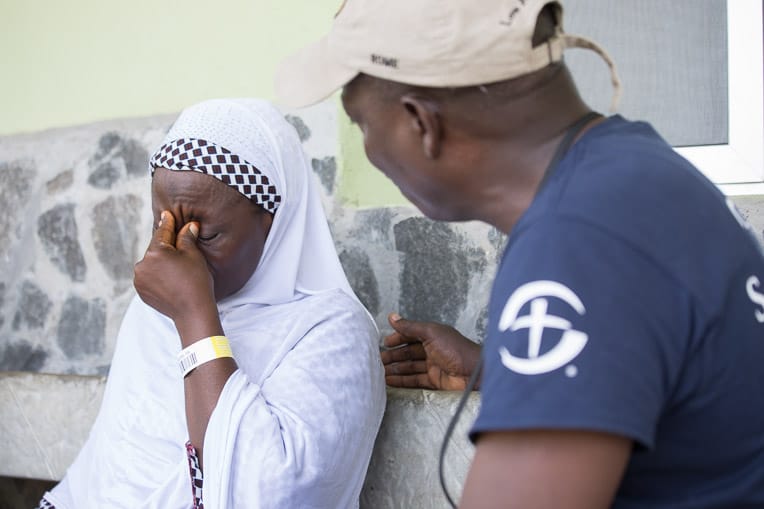 Thomas Benson comforts Fatima* as she relives the horror of the Ebola crisis.

“Everywhere Jesus went, He healed people. He made the blind to see,” Thomas told her. “Jesus did it in those days, and I want you to know that He is the same God today. He is still in the business of healing.”

Fatima, who is a Muslim, kept her gaze fixed on the ground, her expression haunted as she told Thomas about the 40 family members that she lost to Ebola. She was also infected with the virus and received care from Samaritan’s Purse staff at our ETU at ELWA Hospital in 2014.

She shared that she still has flashbacks and finds it difficult to talk about the horror and loss she experienced. Thomas prayed with her, asking God for physical and spiritual healing.

Following surgery, Fatima’s countenance was brighter as she expressed her thanks.

“The [Samaritan’s Purse medical] team at the ETU showed love and showed concern. They put their lives at risk to help us,” she said. “Now the same hands have provided surgery for me and I can see again. I am so grateful.”

Catherine, Bethany, Fatima, and the other patients all returned home with eye drops and clear instructions for post-operative care. They left hopeful and encouraged and with a greater understanding of Jesus, who said “I am the light of the world. He who follows Me shall not walk in darkness, but have the light of life” (John 8:12). 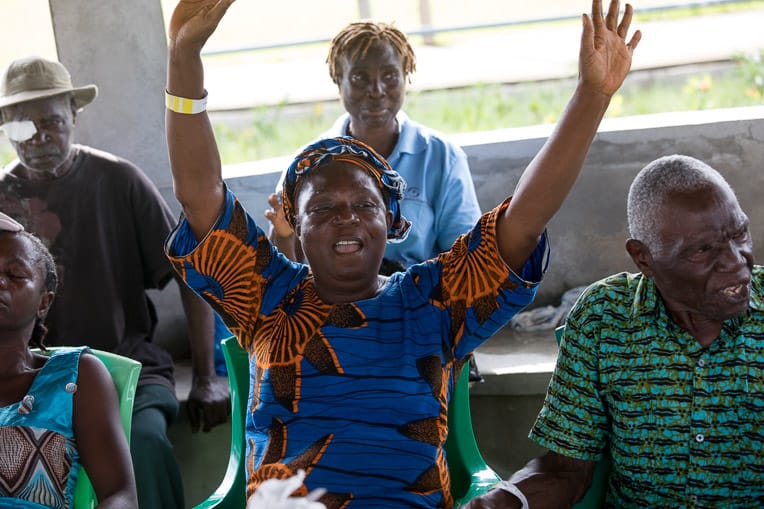 Some patients rejoiced and praised God for His healing and provision. Please pray that these patients will grow in their faith in Jesus Christ. Pray that those who do not have a relationship with Jesus will come to know Him as their Lord and Savior.