As Liberia is no longer threatened by the deadly virus, Samaritan’s Purse gears up for recovery.

Samaritan’s Purse responded aggressively through the office that we’ve had in the country for more than a decade. During the height of the outbreak, we combatted infection rates by providing hygiene training along with prevention education and control kits to affected communities. We also offered home-based caregiver training and materials. 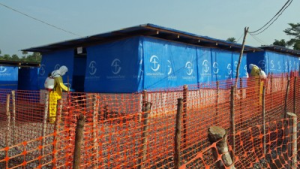 We helped care for the sick by constructing four community care centers that provided supportive treatment as an interim step before going to an Ebola treatment unit. To support these efforts, we airlifted nearly 200 tons of relief supplies to Liberia.

Through a massive public education campaign, which included thousands of church leaders, we provided potentially life-saving information to more than 1.6 million people, directly or indirectly, through a variety of events and media.

Now, a little more than a year later, Liberia has been declared Ebola free. Life has begun returning to normal. But, of course, normal will never be the same.

“It’s been a change of lifestyle in a way—taking your temperature, chlorine footbaths at everyone`s door, washing bucket with chlorine solution on your porch, no hand shaking or touching in general,” said Bev Kauffeldt, who was appointed to the Ebola task force at the beginning of the outbreak and has worked in Liberia for 11 years with her husband, Kendell, the Samaritan`s Purse country director.

Moving forward, the purpose of Samaritans Purse in Liberia is to share the love of Jesus Christ and to build resilience in the country by resuming programs that were put on hold during the outbreak, and by starting new ones.

That includes the reopening of ELWA Hospital. Samaritan’s Purse was doing construction on the hospital when the outbreak began. It was at the forefront in the fight against Ebola, but the epidemic depleted the hospital’s supplies and placed a strain on it.

The reopening of the hospital will signal a new start for Liberians who are currently struggling with a lack of trust in their health care system. To help rebuild the system, Samaritan’s Purse will continue construction on the hospital.

We will also connect with community leaders through leadership trainings. Communities that did well in the fight against Ebola had leaders who believed the virus was real. Many times, these influential people have more power locally than the government. Strong, educated leaders can make a lasting change in their communities.

“We are focusing on leadership training with local community, traditional, and religious leaders,” Bev said. “Ebola taught us that if you can get community leadership understanding the threat and helping, you get the messages across to their people and have a better chance of that community taking the precautions that they need to. We will have ministry laced throughout all of our programming with psychosocial counseling, evangelism, and discipleship.”

Through our work,  Samaritan’s Purse  hopes to reengage with churches by implementing projects that boost morale and provide encouragement. We also plan to resume our protection program to advocate for oppressed and at-risk people.

Children in Liberia have gone through trauma in the last year, and they need to be uplifted. We will be helping through a program that combines sports and activities with health messaging.

Finally, we will train our staff in Christian counseling so that they can minister to people in the communities where they work. As we look toward recovery, we cannot forget the pain inflicted by Ebola and the people who have endured death and suffering for a year.

“The recovery of Liberians depends on us being able to present the Gospel in a loving, encouraging way,” Bev said. “We have always focused on evangelism and discipleship in our programming, even before Ebola. We will equip our staff with the tools to preach, teach and encourage those they are working with.”