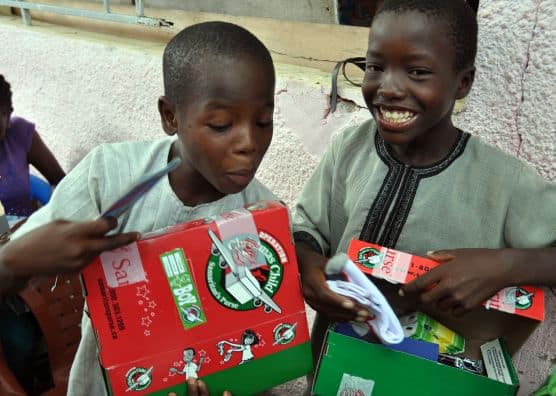 Magathe Fall is Muslim. So are most of the people in one of the poorest areas of Dakar, the capital city of the African nation of Senegal.

But Magathe, the community leader of his neighborhood, still does all he can to ensure Operation Christmas Child gift-filled shoeboxes are distributed to as many children as possible.

“I am very, very happy you are here and I thank God for today,” he said as boxes were handed out to hundreds of eager children in a cramped, hot and humid Christian school that could be reached only by walking through streets filled with mud and raw sewage during Senegal’s annual rainy season.

One of the recipients, a shy 14-year old named Ramatoulaye, tried on the sunglasses in her box and blew up one of several balloons she found inside.

“I like it because I can use everything in the box,” she said. Ramatoulaye wants to be a doctor and is studying English two hours every day at the school. That’s why her favorite items in the box were school supplies.

“A lot of kids here don’t go to school,” she explained. “Their parents don’t have the money. Those kids are taking drugs, drinking and doing bad things.”

Magathe, the community leader, sees Operation Christmas Child as providing hope for the future-and that’s vital for the desperately poor.

“My house is flooded, but I hope things will be better for the youth,” he said. “God has inspired you to do this all the way from Canada, so we pray God gives you good health and a long life.”

In the past year, Samaritan’s Purse has distributed more than 130,000 Canadian shoebox gifts in Senegal. But there are millions of desperately poor Senegalese children still waiting for their first gift.

Please pack boxes with toys, gifts, hygiene items and school supplies so we can distribute many more-while telling each child about an even greater gift: eternal life through Jesus Christ.