Shoebox Gifts Go Even Where There Is No Road 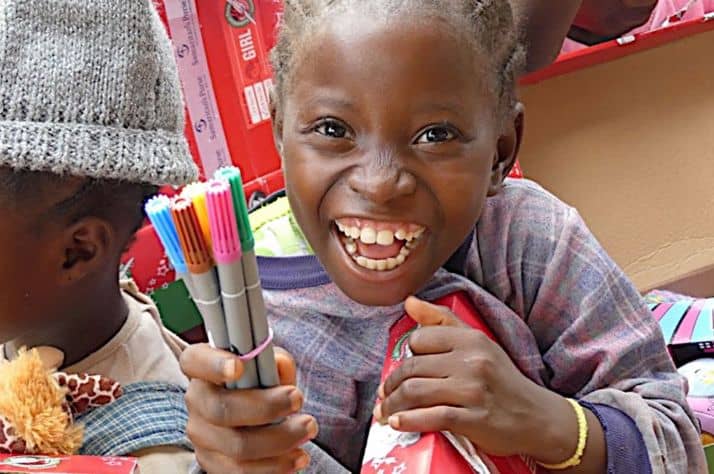 Two new churches start among an unreached people group in Liberia as a result of Operation Christmas Child outreach events.

Sixty bare-chested men started running towards Dian and Sandee. The group’s leader was waving his rifle in the air and yelling. Among the throng was a man carrying a black cooking pot and more men brandishing their rifles in the air.

The two women froze. But to their surprise, the horde ran past them and down into the village. The men were on a witch hunt. 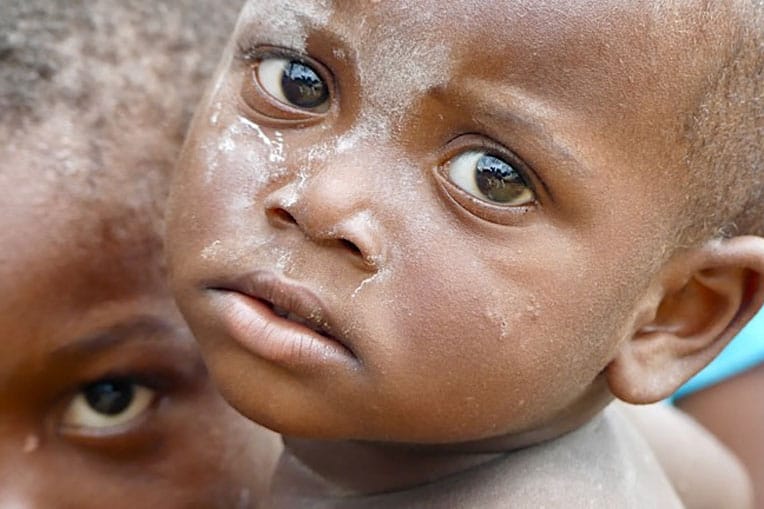 The bush regions of Liberia are home for many precious children.

Dian and Sandee had this harrowing experience as they traveled on their way to the village of Vanyanpa, which like another named Bolo, does not even have a road leading to it. The area is home to the Mano people of both Liberia and Guinea—most of whom are animists, with less than 2 percent of the population considering themselves evangelical Christians.

Amazingly, the first churches ever were started in each of these villages in 2019, soon after Operation Christmas Child shoebox gifts were delivered to their children. Praise God!

Delivering Shoebox Gifts and the Gospel

After avoiding the witch hunt, Dian and Sandee set out further into the bush in a Land Cruiser driven by Bobby, a pastor and computer instructor at ABCU. The road soon gave way to a motorcycle path that was overgrown with trees. Stopping along the way to remove branches that had fallen into the meager trail, the trio eventually arrived in Vanyanpa, population 300. 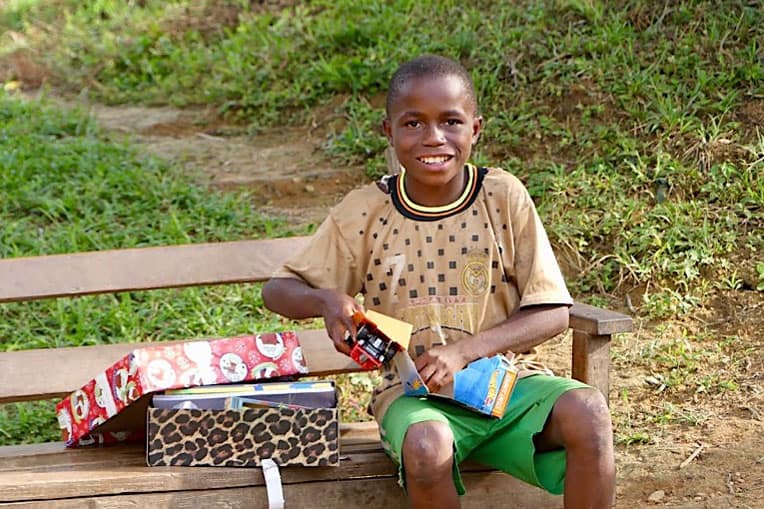 A boy from Vanyanpa enjoys unpacking his shoebox gift.

Mud-brick homes dotted the landscape and Dian said, “The chief showed us a nursery of oil palm trees and then coffee and cocoa beans drying in the hot sun. Vanyanpa had only recently had a well for clean water. Previous to that, the villagers went to two streams in the bush for their drinking and washing water.”

Bobby divided the children into two groups—girls on the right and boys on the left—before he began to share with them about the story of God’s love as it is described in the Bible. Using the Ministry Partner Guide supplied by Samaritan’s Purse he talked about how sin separates us from God and how Jesus’ death and resurrection makes a way for us to know Him eternally, by grace through faith.

Dian also explained to the children that the shoeboxes came from donors who had prayerfully picked out the gifts just for them. Then, each child received a box packed for their age and gender and the countdown to opening them began! 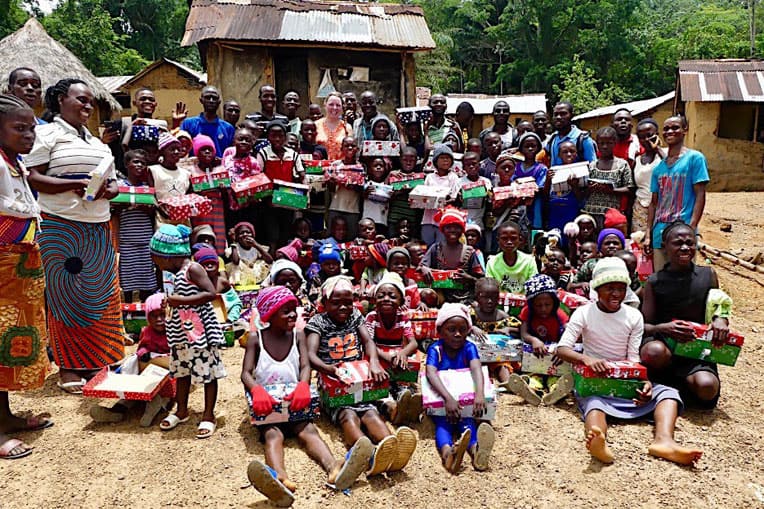 The children in Bolo had never before received treasures like those they found in their Operation Christmas Child shoeboxes. God used these gifts to open their hearts to God’s Greatest Gift, His Son Jesus Christ, and a church was started in the village.

“Most quickly looked inside their box and suddenly closed it up, like a clam shuts its shell. Why? It’s because the children were so overwhelmed by what they had just seen and were afraid if they opened their box again, they would lose the things inside. When they realized that everything in the box was only for them, they were overjoyed,” Dian said.

Inside the shoebox gifts were balls, stuffed animals, toy cars, necklaces, and crayons—none of which they had seen before! Dian also said, “There were bright handknit hats to keep them warm at night, on cold days, or when they are shaking from malaria.” And in some shoeboxes, there were letters and photos from the people who had packed them.

Dian was hopeful as she watched all this unfold. Some of her students at ABCU received shoebox gifts when they were younger, and they still have the letters and photos the boxes contained. To this day, these students thank God for how a shoebox gift helped them experience the love of God in Liberia.

Now a new generation is being transformed by gift-filled shoeboxes. At this outreach event, 70 residents of Vanyanpa accepted Christ as their Lord and Savior! Less than a week later, Bobby returned and hosted the first church service in this Mano village.

Where Only a Few Have Heard of Christ

There’s only a footpath to Bolo, but one of Dian’s students named Francis volunteered to make the hour and a half walk from the main road to this isolated village. He scouted out the territory and, in addition, registered 80 children from the ages of 2 to 14 to receive Operation Christmas Child shoebox gifts. Dian was excited at the prospect, but also puzzled.

“How do you transport 80 shoeboxes through the jungle on foot?” she asked. 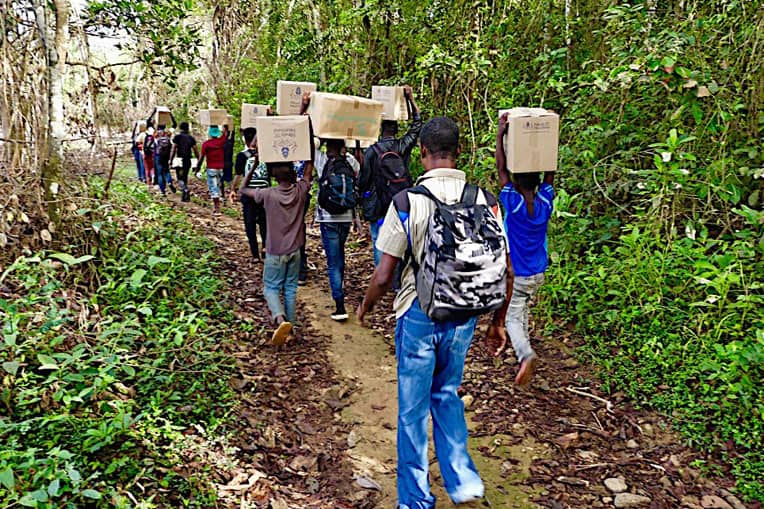 Fifty university students volunteered to carry shoebox gifts through the jungle to the children of Bolo.

To her surprise, 50 students from ABCU volunteered to carry in the boxes. In partnership with another organization, they also brought food, medicine, and a digital player with an audio recording of the New Testament in the Mano language.

Under a tarpaulin shelter put up especially for the occasion, the students led the children who had preregistered for boxes in a time of singing. Next, a student began to share the Gospel with them using the Ministry Partner Guide, and Francis translated into the local dialect.

“When they asked how many had heard about Jesus, only a handful of children raised their hands,” Dian said.

Now each one of these boys and girls has heard the message of Jesus Christ and received their own copy of The Greatest Gift Gospel booklet along with their shoebox gift. In addition, the university students encouraged these children that God knows every person in Bolo by name.

The village chief told the delegation that Bolo had never received gifts like this before and he thanked God for Samaritan’s Purse coming. When he explained that they had no church, one of the village elders offered land for the construction of a building for worship. As a result, the chief requested that ABCU send students to lead the new congregation each Sunday. 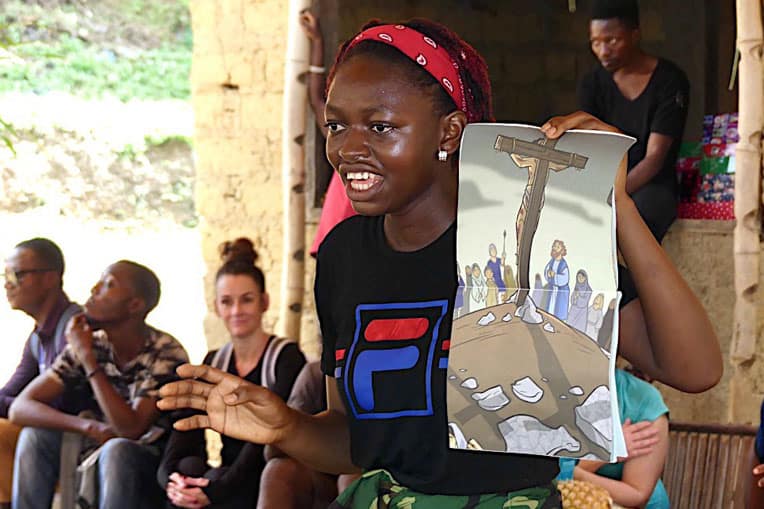 A student shares the Gospel with the boys and girls of Bolo using the Ministry Partner Guide.

“We thought that was a tall order,” said Dian. “Who would ever walk every Sunday for 1.5 hours through searing heat and humidity, or torrential rainfall? Then walk 1.5 hours back out of the jungle? How could you expect follow-up in such an isolated village with no road? But we did not know what God had in mind.”

Just two days later at one of ABCU’s chapel services, a student approached her and said that his evangelism team would start a church in Bolo that Sunday.

“Not only that,” Dian said, “but he said he would follow every Operation Christmas Child outreach event in unchurched villages to plant another, then another, and another church!”

Please pray for church planting efforts among the unreached peoples of Liberia through Operation Christmas Child.

READ MORE ABOUT HOW SAMARITAN’S PURSE IS TAKING SHOEBOX GIFTS AND THE GOSPEL OF JESUS CHRIST TO THE ENDS OF THE EARTH.

Children in Vanyanpa attentively listen to a presentation of the Gospel at the Operation Christmas Child outreach event.