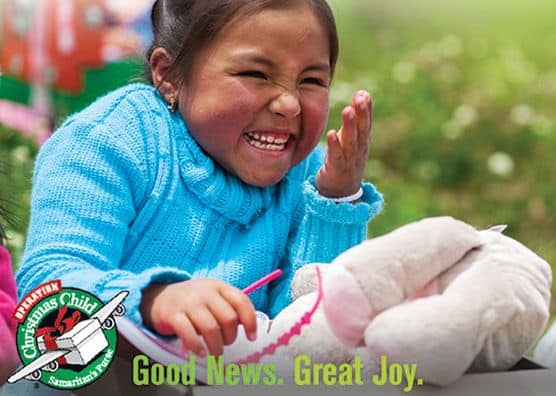 Last year over 100,000 Canadians packed Operation Christmas Child shoeboxes and told us if they wanted a chance to deliver them. Watch videos below of the team that went to Costa Rica in 2014 to deliver shoeboxes.

Learn more about how you can pack shoeboxes and have an opportunity to deliver them to children abroad. This year it could be you 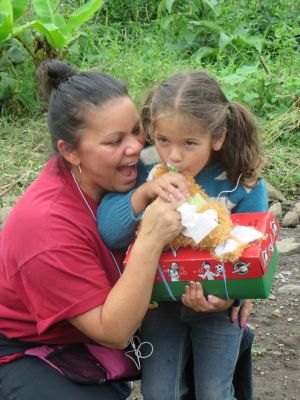 Going on a Samaritan’s Purse trip often means encountering startling, amazing little moments. For the 17 women and one man (me) who are in Costa Rica distributing Operation Christmas Child gift-filled shoeboxes, that moment came right out of the blue. And I’m still thinking about it.

Her name is Nicole. She’s about four years old and received a shoebox at a tiny, impoverished church. The distribution event included food, so Nicole and the other shoebox recipients had hot dogs. I was outside the church (to avoid the stuffy heat inside) when a co-worker on the trip mentioned seeing Nicole and wanting me to photograph her and her box in uncluttered conditions. So we asked trip host Adelita Porras to see if that was possible.

It was, but here’s the punch to the gut: When Adelita asked Nicole to go outside for a photo, Nicole agreed but started eating the hot dog as fast as possible in order to finish it. That caused Adelita to ask Nicole: Did you have any breakfast? No. Did you have any lunch? No. Adelita came outside to me, her heart breaking and tears pouring down her cheeks, to tell me about this precious gift from God whose 3 p.m. hot dog was the first food she’d eaten that day. Her family simply didn’t have anything to feed her.

We told other team members about Nicole and together we rushed to grab snacks out of the team bus to make sure Nicole had something more to eat. She accepted the gifts gratefully, then surprised us with this question: could she share this food gift with her sister?

Incidents like this remind me how incredibly blessed most Canadians are to have all the food we need, all the water to drink and all the clothing to make ourselves stylish. Meanwhile, children like Nicole get a hot dog to stave off hunger pangs at 3 p.m.

The shoebox we gave her provided a glimpse of hope that through us, God hasn’t forgotten Nicole and her sister. He reminded her that He cares through a shoebox full of toys and school supplies packed by people in a country she probably never heard of before getting the box. No wonder I’m still thinking about it.

Coming Out Of Her Shell

You wouldn’t think Costa Rica would have any use for Operation Christmas Child—this is a country that, by Latin American standards, is doing very well. The roads are paved, water is drinkable, the electricity stays on and there are some very nice shopping malls where me and 17 women are distributing Canadian-packed shoebox gifts.

But go just a bit below the surface and the picture is startlingly different. We visited an orphanage where more then 100 children graduated from The Greatest Journey. That’s the 12-week evangelism and discipleship program that Samaritan’s Purse offers to all children who have received shoebox gifts.

A majority of the children at this orphanage aren’t orphans; they’ve been taken away from homes where physical and/or sexual abuse has deeply damaged their childhoods. In some cases, the parents are trying to find the children and return them to their miserable lives; that’s why I wasn’t permitted to photograph any child. Note: the photo displayed at the top of this page was taken from a previous Operation Christmas Child distribution trip.

But I did interview several and was touched by their stories and encouraged to see how they took to the lessons of The Greatest Journey and came to a real and full understanding of God’s ultimate gift-His Son.

Twelve-year-old Sara, for example, was a withdrawn child when she arrived at the orphanage. Through the lessons learned in The Greatest Journey, she came out of her shell so thoroughly that she was one of the speakers at the graduation ceremony.

Initially, our Costa Rican church partners weren’t permitted to bring Operation Christmas Child or The Greatest Journey to this orphanage. Eventually, the principal relented to the point of telling our partner she had to be interviewed by one of the orphanage’s main staff members. The staffer asked our partner to step into the privacy of her office-so she could tell our partner that she was a Christian who was praying for something like this to bring hope to the orphanage! An amazing story of God at work.

I’m here with the team for the rest of the week and hopefully will have more stories to tell you about how the donations of generous Canadians are making a difference in this life and the life to come.