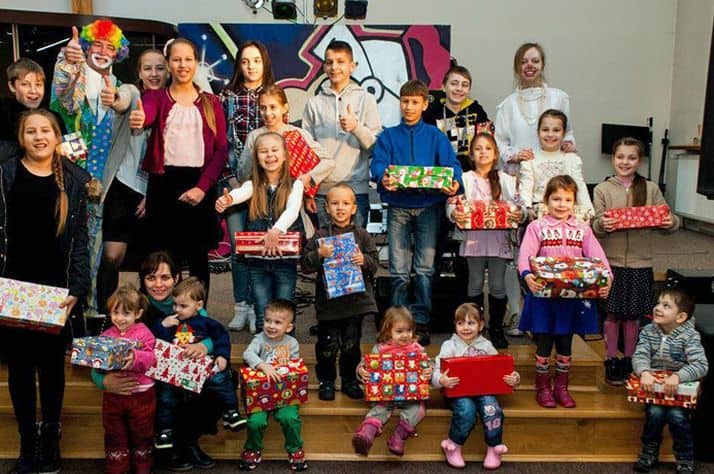 Note: For five years we have had the special opportunity to send Operation Christmas Child shoebox gifts from Canada to children in Ukraine. We began this effort in 2014 to respond to the conflict that broke out in the country that year.

It has been a blessing for Operation Christmas Child Canada to be a part of this work in Ukraine. Ukraine will continue to receive shoebox gifts from the United States, but shoeboxes collected in Canada will no longer be sent to Ukraine. This will allow us, as Operation Christmas Child Canada, to continue to focus our efforts, and shoeboxes, in the regions entrusted to us—West Coast Africa and Central America.

By Oleksandr Vasylets, a Ukrainian refugee in Poland, a missionary, and an Operation Christmas Child ministry partner

I am from eastern Ukraine, where I pastored a church. I left our hometown when I realized that military conflict, which started in our area in the spring of 2014, was becoming more intense. On June 2, my wife, Elena; our daughter, Aliona; and our newly born son, Alexander, loaded our car with our most needed things and fled from our town, which by that time had already been captured by terrorists. I did not want to risk the lives of my family by remaining in the area of fighting. 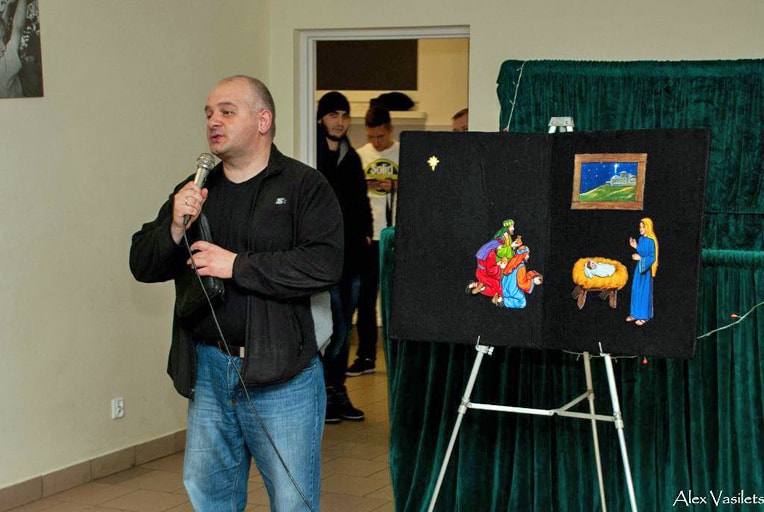 We were invited to live in a nearby city, where some good people provided a place for us to stay. They suggested a few good job and church ministry involvement opportunities. We prayed, asking God whether we should accept these opportunities, but we clearly felt in our hearts that God said, “No!”

An idea came to my heart to move to the western part of Ukraine. We moved and spent two months in a small village. We could not find any job opportunities or a way to join a church ministry. We continued to pray and got an invitation from a good man to live in the city. He promised us jobs and housing. We prayed and again felt God say, “No!”

We prayed again, asking God: “Do we really have to go to Poland?”

Our hearts, finally, have been filled with His peace.

The group of children who received shoebox gifts.

On August 4, 2014, we passed through the Polish border as refugees. At the border, we were approached by a man with a video camera who asked where we were going.

“To Poland,” I answered.

We were sent by border guards to a refugee camp. Having lived in the camp for about a month, we were looking for a Protestant church. We were also looking for a flat to rent because we desired to move out of the camp. Our attempts were fruitless. We were struggling with culture shock and the language barrier. At that point, we were longing to return to Ukraine. We couldn’t understand why we had come to Poland and asked God to show us the purpose. We prayed that the war in Ukraine would stop so that we could return home to continue ministering at our local Ukrainian church. We did not understand at that point that God was calling us to mission work. We continued to search for God’s will, and He began to lead us step by step, demonstrating to us His direction and providing us with our daily needs. 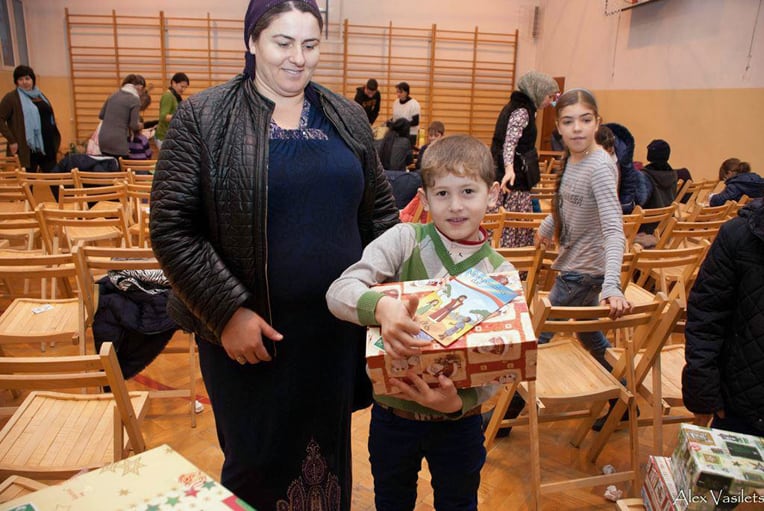 A refugee child with his shoebox gift.

By September 2, 2014, we had to move from the refugee camp to a rented flat and report the address of our new accommodation. It was the end of August, and we hadn’t found anything.

After this prayer, we decided to take a walk. We saw two women near the Catholic church, approached them, and asked if they had a flat that could be rented. One of them said she had already rented her flat. The other, Mrs. Albina, had been staring at us for a while and asked us in Ukrainian if we were from Ukraine. She invited us to her house because half of it was for rent.

Mrs. Albina asked whether we were Catholics. We replied that we were Protestants. She told us that the Protestant church was next to her house and that a pastor of that church lived on the next street. She led me to his home.

We saw that God answered our prayer! 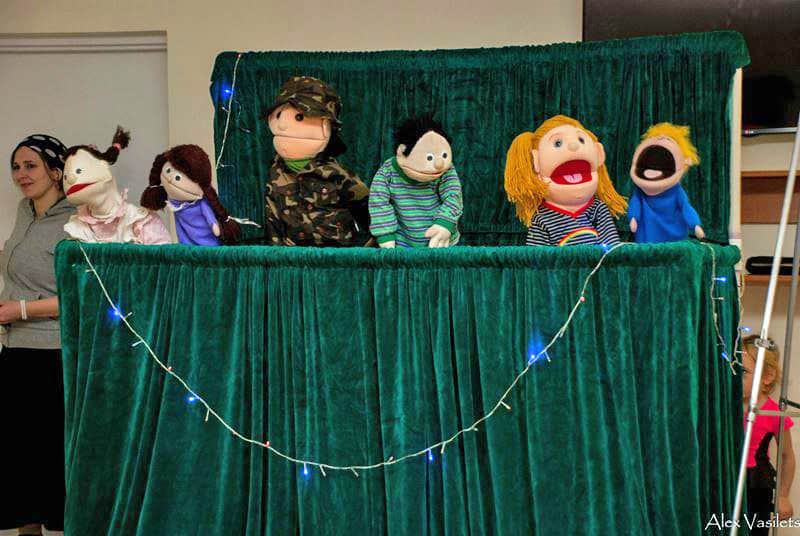 Oleksandr uses a puppet show to help teach the refugee children about Jesus.

Recently, we learned that Mrs. Albina saw on the news the moment when my family passed through the Polish border. Apparently, the man who approached us at the border with camera was from a TV news program.

When Mrs. Albina heard that we didn’t know where we’re going, she started to pray: “Oh, poor things … Dear God, how can I help these people?”

She was shocked when she met us in front of the Catholic church. She knew it was God who had sent us to her.

Ministry in the Refugee Camps

While in the refugee camp, we noticed a great deal of the refugees needed God and spiritual and pastoral counseling and care. Their hearts were ready to receive the Word of God and to serve others. While staying at the refugee camp, we had gathered for daily prayer meetings. We felt a great need for a Russian-speaking ministry there.

The pastor of our new Protestant church allowed us to gather for Sunday school classes at his church. There were members of three families who gathered together for prayer at the first meeting. We were searching for God’s face, His presence, and His will. 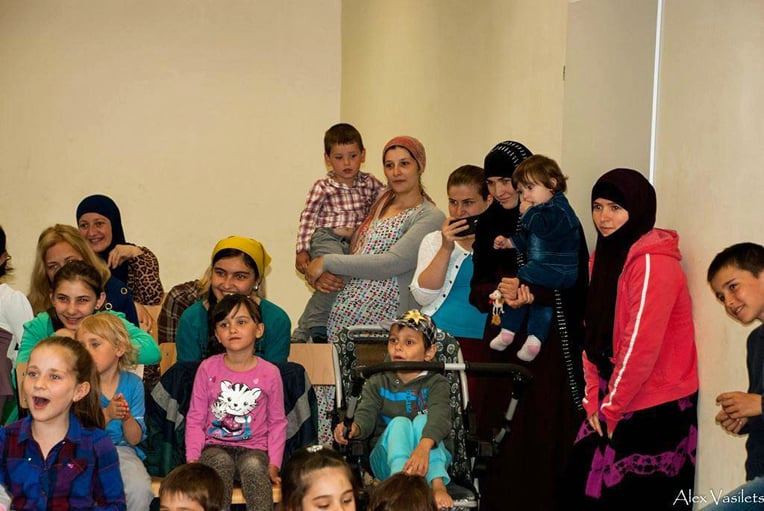 A group of children that Oleksandr ministers to.

At that point, I still had no idea why God had led my family to Poland. I was looking for the end of war in my hometown so that we could return. My understanding changed only after a visit from our friends from Moscow. They shared with us a prophetic word that they received nine years ago.

“God will send Christians from Ukraine to Poland, which will become a shelter for refugees. A wave of awakening will rise from Poland and go to Europe.”

Our hearts lit up for the mission!

Our involvement with Operation Christmas Child in refugee camps in Poland started in December 2014. Our Russian-speaking fellowship organized the shoebox distributions for children from Ukraine. Every child received a Samaritan’s Purse gift box.

On September 27, 2015, we celebrated one year of starting our Russian-speaking ministry. During this year, more than 300 refugees from Ukraine and Crimea have passed through this ministry. Some of them had lost their relatives, some of them passed through captivity, and some lost their homes, which had been destroyed by bombings. Many of them kept anger, hatred, and resentment in their hearts. God has filled people’s hearts with His peace, grace, and freedom, giving them His power to forgive their offenders and enemies and the strength to serve to others. 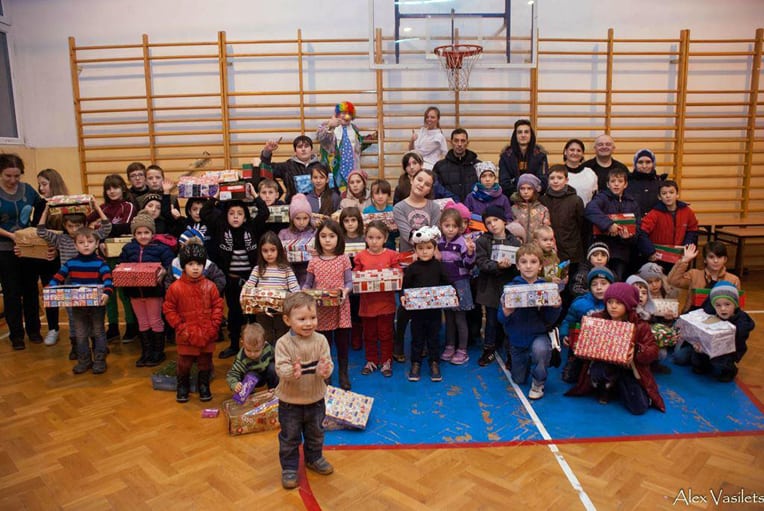 Refugee children with their shoebox gifts.

That year, with the support of Belarus missionaries, we organized Christmas parties and outreach events in four refugee camps. The Gospel was shared with 187 children from Ukraine, Chechnya, Georgia, and Armenia. Every child received an Operation Christmas Child gift box.

For two towns, we could organize only one distribution, but the towns are 12 miles apart so some kids needed transportation. We prayed, and the answer came unexpectedly. The next day, we got a phone call. The Islamic leader in one of the towns was calling with the promise to bring children with his own car. He made eight trips and brought all 28 children. God is great!

A Ukrainian Missionary in Poland

Today, our ministry for refugees remains relevant. Now I know exactly why God has called my family and me to Poland. I hope that my ministry here will strengthen the church’s outreach to people who have become open to the Gospel because of their difficult life circumstances.

I serve presently as a pastor of the Russian-speaking ministry in the local Polish church. Our team is actively ministering to refugees in the nearby refugee camps.

In June 2016, we were able to organize Child Festivals in three refugee camps. At that time, there were 160 children from Chechnya and Georgia. We showed them a drama about the prodigal son and explained the love of God the Father to every child. We sang songs about Jesus and all the children (mostly Muslims) were active. Then we prayed to our heavenly Father and blessed every child in the name of Jesus. We had prepared little individual gifts with sweets and attached John 3:16 to each of them.

At the end, many children as well as parents came to us thanking us for the visit and asking if we could come more often.

For the coming season, we would like to mobilize several Russian-speaking fellowships to organize Gospel outreach events to all 12 camps in Poland. At the moment, the majority of the refugees are Muslims from Chechnya, Georgia, and Tajikistan. Altogether, there are around 500 children. Please pray with us for dedicated people who would like to minister with us.