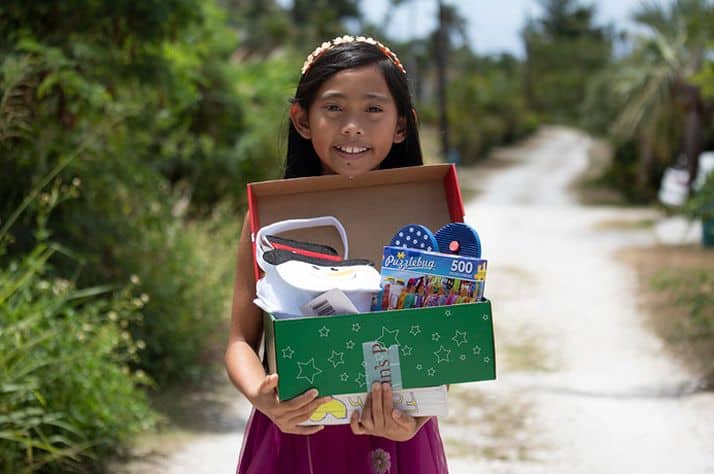 Typhoon Yutu destroyed thousands of homes and left families without shelter, food, and water last fall on the small Pacific island of Saipan. Cornerstone Christian Church gathered together and wept during their first worship service after the storm hit. 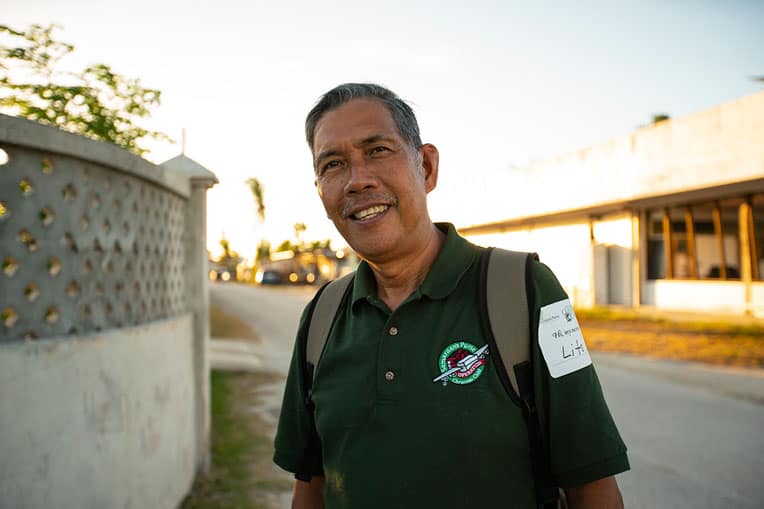 “We were broken, as individual people and as a congregation,” said Femie Rey, whose husband, Manuelito, pastors the church.

But the Reys and their congregation refused to let tragedy keep them down and instead seized the opportunity to reach their hurting neighbors with the Gospel of Jesus Christ. They partnered with Samaritan’s Purse to distribute emergency relief supplies that were airlifted over the course of three flights on our DC-8 cargo jet.

And this year when the opportunity came to extend their ministry outreach through Operation Christmas Child, Cornerstone was eager to participate.

“The community as a whole is still in the recovery stage,” Pastor Manuelito said. “A lot of people are still traumatized, even children. This Operation Christmas Child outreach will send the message of God’s love to them.”

Cornerstone recently hosted a shoebox gift outreach event at their church and also partnered with other churches to host an event in one of the areas hardest hit by the typhoon.

In recent weeks, 70 shoebox gift distributions have been held across the island, reaching about 12,000 children. 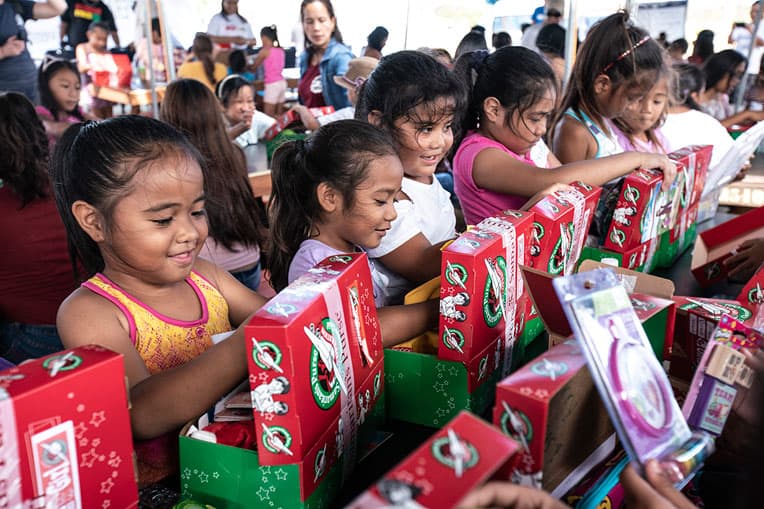 Saipan, the largest of the Northern Mariana Islands, is the first Pacific island to receive shoebox gifts as part of an Operation Christmas Child initiative launched by Samaritan’s Purse President Franklin Graham to distribute gift-filled shoeboxes to 1,000 Pacific islands in the next five years.

Femie said that many children who came to their church for the distribution did not attend the church but were friends of church members.

“[The typhoon] was the most horrifying experience we have ever had,” Pastor Manuelito said. “We prayed that the Lord would send help. Samaritan’s Purse is God’s gift to us.” 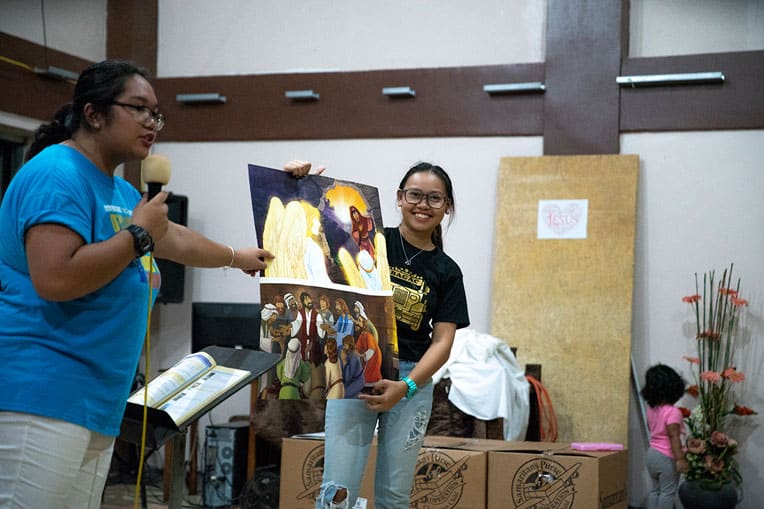 Wren, right, helped with the Gospel presentation during the shoebox distribution at Cornerstone.

In the weeks that followed the October 2018 storm, Samaritan’s Purse partnered with Cornerstone and other local churches to provide critical supplies to 6,000 households on Saipan.

Femie explained that because so many local churches already knew about the work of Samaritan’s Purse through the disaster relief response, the churches were excited to continue that partnership through Operation Christmas Child.

“I see Operation Christmas Child as a continuation of the move of God,” Femie said. “I believe this is a season where God is pouring out His divine favor. We do not want to miss what God is doing.”

Cornerstone is not stopping with the outreach events, as the church already has plans to offer The Greatest Journey discipleship classes to shoebox recipients.

Mariz and her daughter Wren are two church members who have been trained and are ready to help teach the 12-lesson discipleship classes. Mariz is a Sunday School teacher and Wren, a high school senior, leads worship on Sunday mornings. 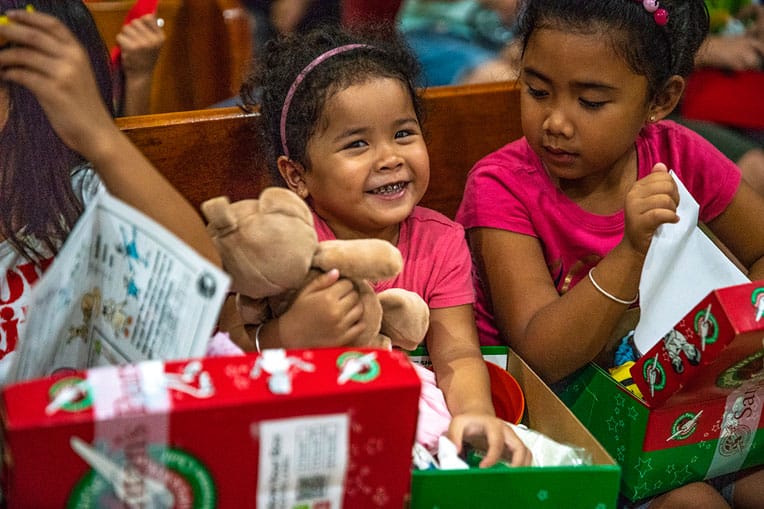 Wren said she volunteered to teach The Greatest Journey because she wants children to know God early in life. Wren wants children to understand the message that Pastor Manuelito has been preaching since the storm: God can use anything—even painful experiences like a natural disaster—for their good and His glory.

“Our pastor said that Yutu’s devastation will be our transformation,” Wren explained.

Wren and Mariz volunteered during the emergency relief distributions at Cornerstone even though their own home was damaged. The roof was partially ripped off and many of their belongings were destroyed. They had to stay with a neighbor for more than a month.

“But still, God has been good to us,” Wren said. “We got the tarp, solar light, and water filter from Samaritan’s Purse. We’re very blessed.”

Eden, 12, received a shoebox gift during the Cornerstone outreach event in late March. Eden is just one of many children who lived through the terrifying typhoon.

Her favorite gift in the shoebox was a calculator. “I’m very thankful for the calculator because it can help me in school,” she said. “Most of my school supplies were gone in the typhoon.” 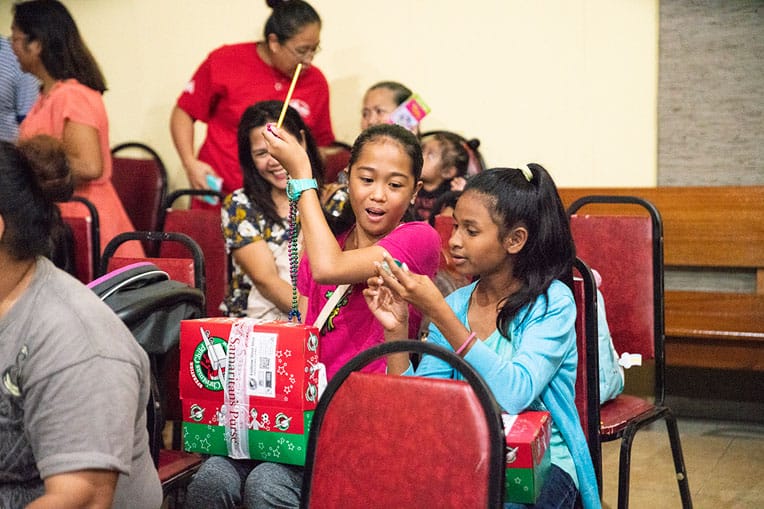 Eden, left, was excited to receive the gifts in her shoebox.

Despite Saipan’s warm climate, Eden was also thrilled to find a scarf and purple, glittery mittens in her shoebox—gifts she had never received.

Eden and her mom, Novelita, also received the critical aid supplies last year from Samaritan’s Purse. “It was a very big help for us,” Novelita said.

Novelita sent Eden to ride out the storm at a hotel with a family friend, but she stayed behind and had to hide under her bed for five hours after the roof came off her home. “I thank God for protecting us,” she said.

Novelita said she was grateful that Eden was able to attend the shoebox distribution. “She was really excited. She encouraged her classmates to come.”

Please pray for children like Eden who will now begin The Greatest Journey. Pray that children, families, and communities on Saipan will be transformed by God’s love.