Love in a shoebox delivered to Haiti 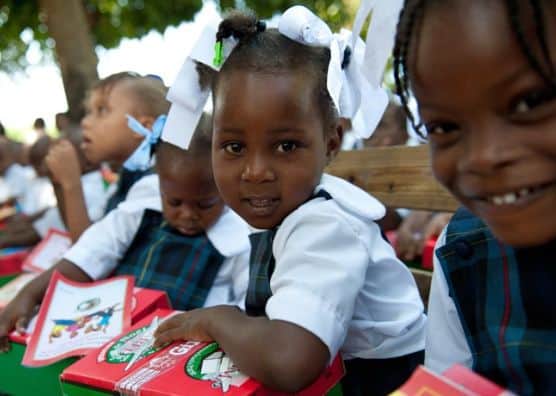 A volunteer witnesses the impact of Operation Christmas Child firsthand

I recently visited my daughter Laura in Haiti. She’s serving with Samaritan’s Purse. When I arrived, she told me she had a surprise for me-we would be attending an Operation Christmas Child shoebox distribution. I’ve been participating in packing shoeboxes for 15 years and am friends with one of the first recipients of a shoebox, now a wife and mother in America. I’ve seen her passion for God. The story of that first delivery still touches me.

Church members in England, the U.S., and Canada packed boxes for children in Bosnia. They were a vessel used to introduce our loving God to a war-torn, impoverished society. My friend received the greatest gift of Christ and eternal life after she received her shoebox.

I have heard all of these stories. But I never thought I would get to participate firsthand.

Laura and I arrived with Pastor Kenol at a small open-air church in the heart of a Grand Goave. Children arrived by foot, having walked 45 minutes from their mountain village homes to the church. It was about 100 degrees Fahrenheit and the children, dressed in their Sunday best, were glistening with sweat.

A quiet and profound moment of impact

The children filed quietly into the church, youngest to oldest, front to back, boys on the right and girls on the left. The pastor led them in songs for 15 minutes, and they were given booklets. A young man said he would come to their village to teach them about Jesus through the booklet lessons.

As the songs, introductions, and speeches ended, volunteers began handing out the shoeboxes. Pastor Kenol asked Laura and I to help. The children held their boxes and booklets until all were distributed, and then they were told that they could open them. Several children sat clutching their boxes in amazement. Others carefully opened their packages delighting in small toys, stuffed beanies, underwear, and socks. The mothers faces lit up with excitement and thanksgiving.

Too quickly, the party was over. The children left as quietly as they had come but with eyes glistening with hope, walking back to their homes with their precious packages. I was left in even greater amazement at our God. He orchestrates simple shoeboxes packed with blessings and love by people all over the world to be given to children who have never seen a toy or had paper to write on or a pencil to write with. Through these gifts, mothers are drawn to Him. Truly the Greatest Gift, the love of Christ, is packed in every shoebox.