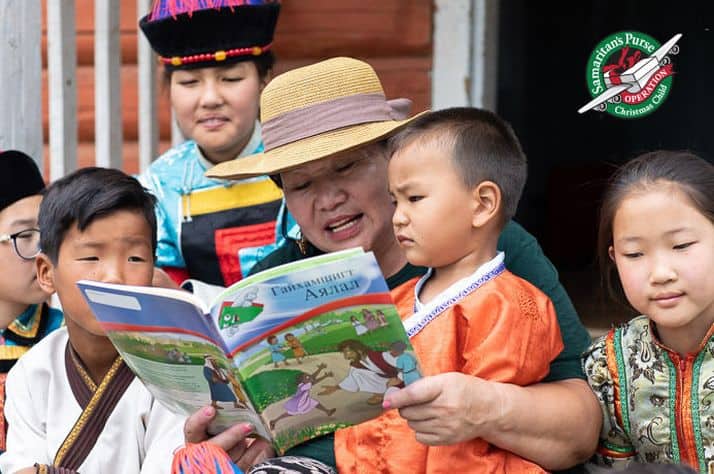 Tuya, a former businesswoman, has a passion for sharing the Gospel and helping churches start new churches on the grasslands.

Highways leading out of Ulaanbaatar, Mongolia’s capital city, continue east for many miles as far as the city of Chinggis. From there, the roads diminish to mere gravel paths that stretch across the vast pasturelands of Khenti Province.

It’s from Chinggis, where transportation begins to get more difficult, that six churches are praying—paving the way—for the Gospel to spread to even more remote villages.

God is moving in response to their intercession, and the answers are coming through unexpected means—a former car parts saleswoman and simple shoebox gifts sent from far away.

‘Such a Great Opportunity to Reach Out’

Tuya Tserendash left her lucrative business in Ulaanbaatar to go to Bible school at age 52. After graduation, she returned to Khenti province where she’d grown up raising livestock. She now helps tend the growing church in this largely Buddhist and animist area. 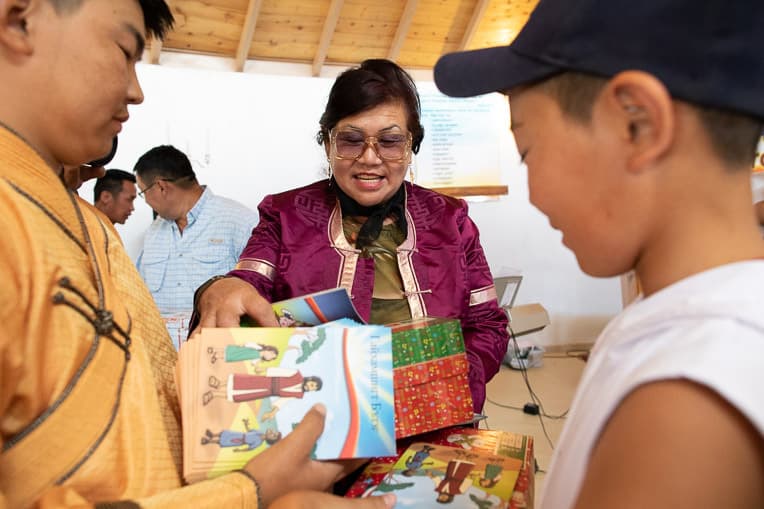 Tuya delivers shoebox gifts to remote areas as part of her church-starting efforts.

Bringing Operation Christmas Child shoebox gifts filled with toys, clothes, school supplies, and hygiene items, she traveled to several villages that the churches in Chinggis had been lifting up in prayer—four locations in 2017 and two in 2018. When the villagers heard the Gospel presented together with these tangible expressions of God’s love, some accepted Christ and began meeting together to study the Bible. Six churches sprang up where none had been before.

Today, some of the new congregations are offering The Greatest Journey discipleship course, a 12-lesson Bible study designed especially for shoebox recipients. Through its 12 lessons, boys and girls are growing in their faith and becoming little evangelists in their families and communities. 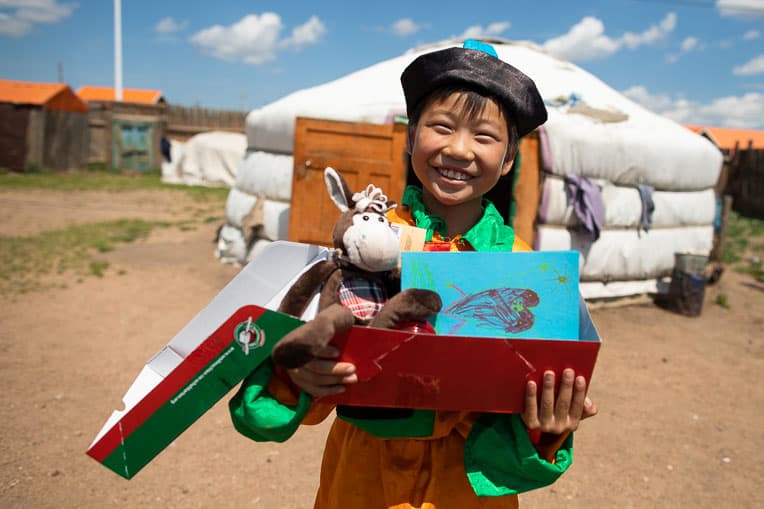 A boy in Mongolia smiles after receiving his “wow” toy and a personal note in the shoebox gift lovingly packed just for him.

When asked about the influence of Operation Christmas Child in Mongolia, Tuya said, “It’s such a great opportunity and tool to reach out. Mongolian churches don’t have a lot to give, but Samaritan’s Purse provides the tool. It helps the local churches to cooperate.”

‘Your God Is My God’

Tuya’s husband passed away in 1997, leaving her to provide for their three children as well as her eight younger siblings. In an effort to generate income, she purchased a shipping container and set up a shop inside it to sell car parts. 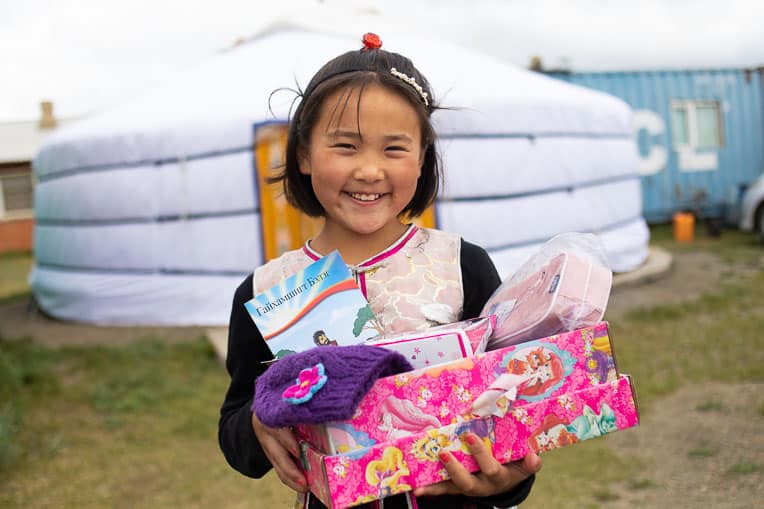 A young girl in Mongolia shows off the treasures she received in her shoebox, including a Gospel storybook in her language.

Seven years later, Tuya’s mother became a Christian and began sharing her faith with her. Tuya couldn’t understand what her mother was talking about, but out of respect she told her mother, “Your God is my God.”

Tuya visited a church for the first time in her life later that year, but was confused by all that was said there. Frustrated, she talked to a pastor about why her mother, a miner with an elementary education, could understand the Gospel and she as a businesswoman couldn’t. He encouraged her to pray for understanding.

After months of asking for this, Tuya sat in her container-turned-store reading the book of Ruth when she read the very thing she’d told her mother earlier: “Your people shall be my people, and your God, my God” (Ruth 1:16). Suddenly she grew very excited about the Bible, and it became God’s Living Word to her.

As this happened, both her family and coworkers noticed considerable changes in her. 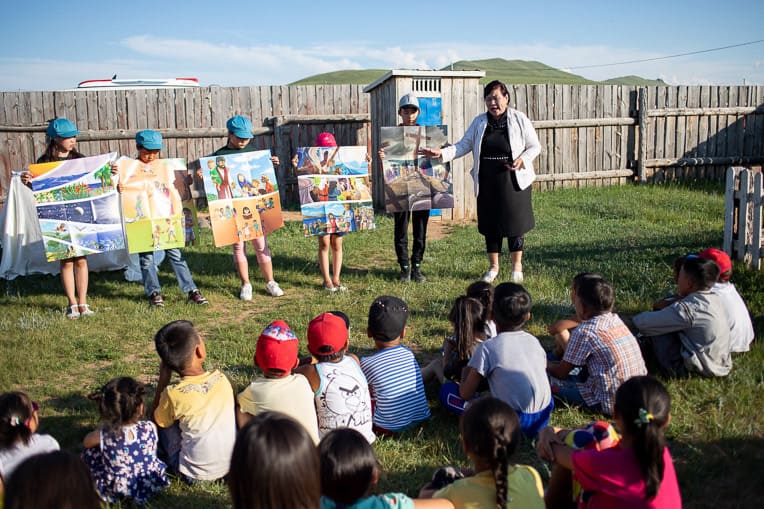 Tuya shares the Gospel before shoebox gifts are distributed at an Operation Christmas Child outreach event in Norovlin.

“I used to be a very proud and demanding woman,” Tuya said. She was so strict with her college-aged kids that they often wouldn’t return home until after she was in bed. They encouraged her to spend more time with God because when she did, they wanted to be around her more.

“If that God managed to change Tuya, that God can change us,” said her long-time coworkers.

After three years of growing in the Lord and encountering Him in significant ways, Tuya said, “I completely made up my mind to serve the Lord and sell the container.” By then a successful businesswoman with two cars, a house, and eight employees, she said, “I fell from a very high altitude.” But she counted material gain as loss for the sake of riches found only in Christ.

To Bible School and Beyond

For the next three years, Tuya attended Bible school where she began praying, “Send me” (Isaiah 6:8) until God opened the door for her to serve at The Greatest Lord Church in Chinggis. 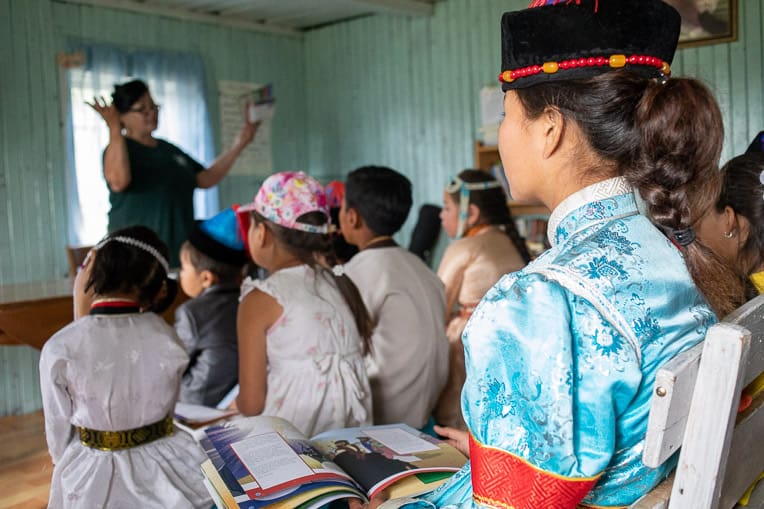 Tuya teaches the third lesson of twelve in The Greatest Journey discipleship course.

The name of this church carries meaning to Mongolians that others might miss. They call their national hero Genghis Khan “lord king,” but for Christians in Mongolia their only Lord is Jesus Christ.

She said of these church-starting efforts, “It would be very hard without shoebox gifts. They are such a great Gospel opportunity. They equip churches to reach out to people and have fellowship…being able to provide a tangible gift to local people helps a lot.”
—

As Samaritan’s Purse celebrates its 25th year of sending gift-filled shoeboxes to children in need, please pray for each shoebox to not only bless a boy or girl, but also be a tool for churches to share the Gospel in unreached areas.

It’s not too late to send Good News and Great Joy to a child in need—you can pack shoebox gifts online! Get started here: PackaBox.ca