God provides for children in Haiti 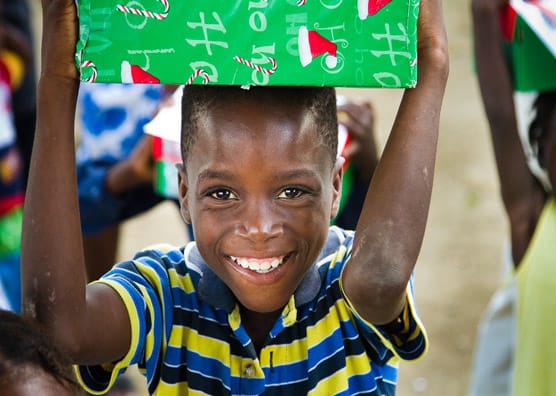 Children lined the walls of the building. Energy was felt throughout the room as children began to receive their Operation Christmas Child gift-filled shoeboxes. Their smiles reflected off one another, and the room filled with laughter.

Unbeknownst to the children, our distribution crew was worried. It quickly became clear to us that there would not be enough shoeboxes for everyone. Concerned, we whispered urgently amongst ourselves, but what could be done? In a remote village in the nation of Haiti, there were no more shoeboxes than what we had already given out!

Meanwhile, the rest of the room was full of joy. One by one, the kids skipped out of the building, gifts in hand.
We were all thinking the same thing: we’ll run out of shoeboxes any minute now. But we chose to trust that God would provide for each child. Shockingly, child after child was given a gift.

When the last young face lit up after receiving what was likely the first gift they had ever received, the heart of every distribution team member in the room silently rejoiced. A sigh of relief swept through the room.

Until a young boy came tearing into the building. He had been taking care of the mules all day and been forgotten. Seeing that the last of the shoeboxes had been distributed, his eyes filled with tears. We all caught our breath-God, how could You leave us just one box short?

Then, without hesitation, one of the children who had just received a present offered it to the little boy. Ecstatic, he readily accepted!

All of us were moved by the child’s generosity and God’s providence (and the caring child later received his own shoebox so none went without). What a day! God is faithful, and we are excited to see what He will accomplish in bringing children to faith in Him through The Greatest Journey discipleship program in 2013.

“This is how we know what love is: Jesus Christ laid down his life for us. And we ought to lay down our lives for our brothers. If anyone has material possessions and sees his brother in need but has no pity on him, how can the love of God be in him? Dear children, let us not love with words or tongue but with actions and truth” (1 John 16-18).