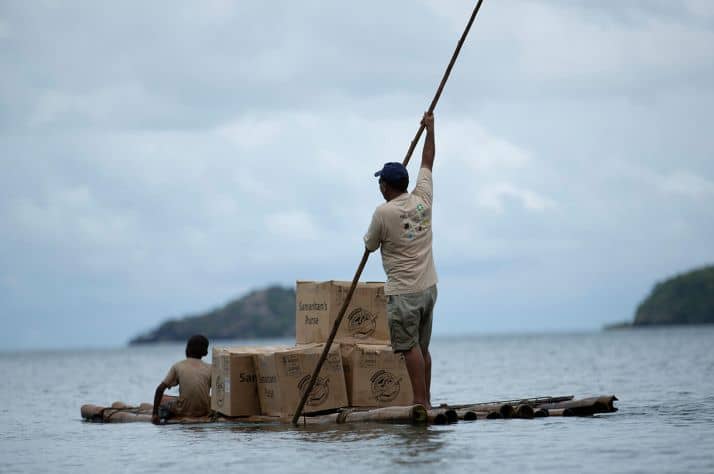 Operation Christmas Child shoebox gifts are making their way from processing centers to trained volunteers around the world. These teams often go to great lengths to deliver the gifts to the far reaches of their countries so that boys and girls can hear about God’s Greatest Gift, Jesus Christ. Here are some interesting modes of transportation that local partners use to transport the gift-filled shoeboxes and ways to lift them up in prayer:

By Canoe
Local churches are leading outreach events across Fiji, which boasts more than 100 inhabited islands. Its mountainous landscapes filled with dense tropical forest make it challenging to transverse. 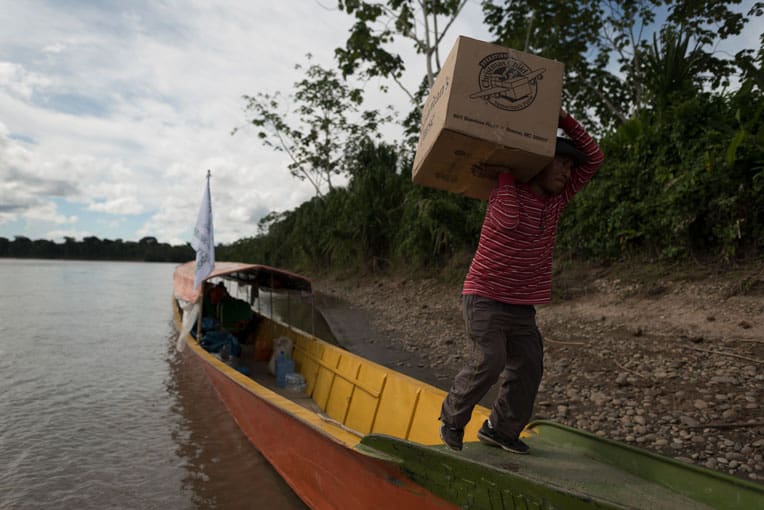 Transporting shoeboxes by boat or canoe often can be a delicate balance of cargo over the course of multiple hours.

This past year, the Operation Christmas Child regional leadership team in Suva brought the Gospel to 14 villages on the island of Viti Levu with no road access. The team transported shoebox gifts by canoe, needing to go both with and against the current to make it to their destinations.

The Suva team was permitted not only to hold Gospel outreach events and give out shoebox gifts in the villages but also to teach The Greatest Journey, our follow-up discipleship program for shoebox recipients. This was especially significant because many of these villages did not have access to the Gospel of Jesus Christ and were hearing of His saving grace for the first time.

Pray for volunteers in remote areas like in Viti Levu as they explore uncharted territories to gain a hearing for God’s Word.

For a team of church volunteers in the central Philippines, their greatest challenge in transporting shoeboxes by canoe was the depth or shallowness of the water. At times, the team had to carry the long, thin boat filled with shoebox cartons over their heads for most of a day.

They wrapped the precious cargo in cellophane for protection from the splashing water.

At other times, parts of the river were filled with high, swift currents. The going was slow as they wrestled the swaying boat for several hours to prevent the shoebox cartons from toppling into the raging river. They had taken the added step of wrapping the precious cargo in cellophane to protect the cartons from the splashing water.

At the end of their exhausting journey, they were reenergized by telling village children about Jesus and reveling in their smiling faces filled with wonder.

Pray for God’s protection and strength over these energetic, determined volunteers who consider the difficulties of the journey worth it to share the love of Jesus.

By Sailboat
Enubirr, home to just over 1,000 people, is part of the Operation Christmas Child Pacific islands initiative. The goal of that effort is to bring the Good News of Jesus Christ to over 500,000 children in the Pacific islands by 2023. 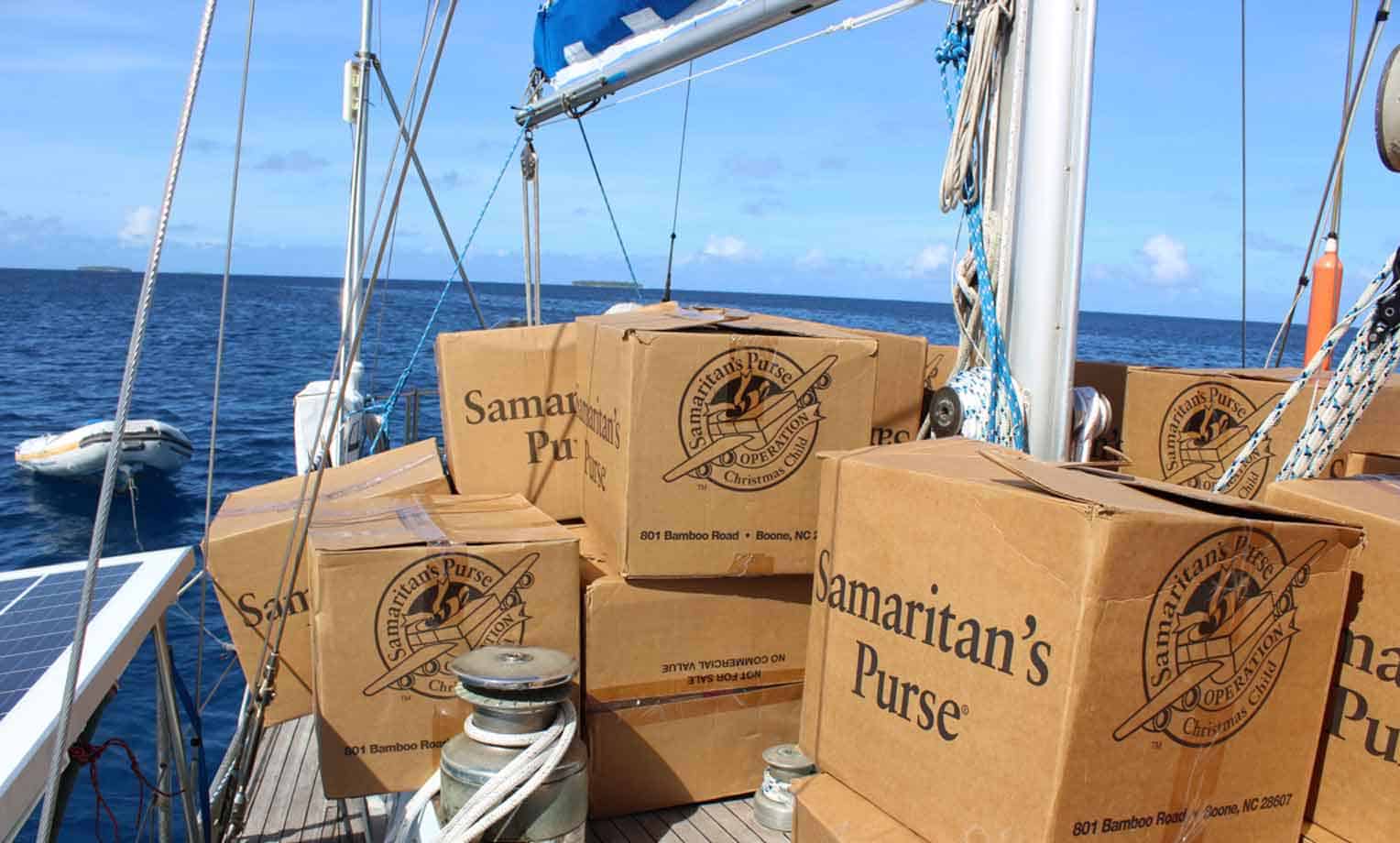 A team of missionaries and volunteers brought 30 cartons of Operation Christmas Child shoeboxes from the island of Ebeye to Ennubir by sailboat.

Part of the Marshall Islands, Enubirr doesn’t have electricity or an airport. So, how do you transport 30 cartons of shoeboxes from one island to another? A team of four volunteers used a 57-foot sailboat, traveling for six-and-a-half hours over rocky waters to complete the 40-mile journey.

They were greeted by more volunteers who organized an outreach event for nearly 300 children. Over a third of the children responded to the event’s altar call.

“Operation Christmas Child is not just a ‘give a gift’ kind of program,” said Katie, one of the volunteers and a missionary to the Marshall Islands. “It offers the gift of salvation, which we have seen over and over again impacts a whole community.”

Pray for the local churches as they disciple those who made decisions for Christ. Pray that God also will work in their families to bring others to faith in Him.

By Four-Wheel Drive Vehicle
There are two ways to get to Ambovombe in southern Madagascar, and they both involve driving on sand, mud, and rocks for hours. 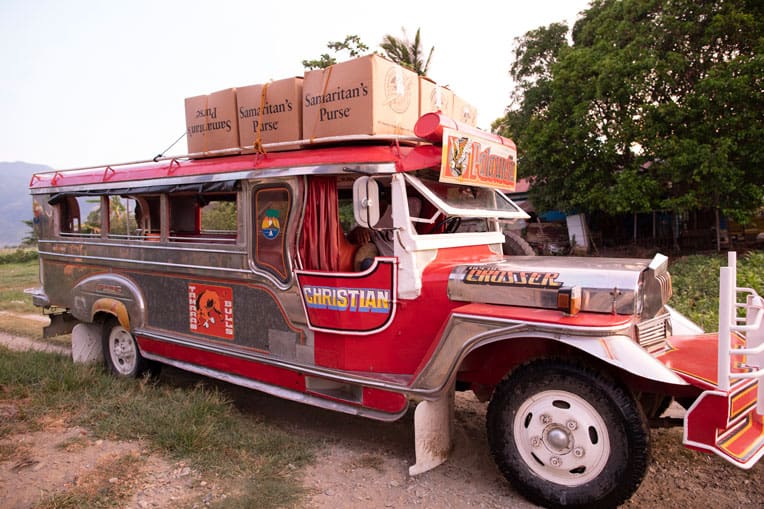 Many shoebox destinations cannot be accessed by two-wheel drive vehicles. Even with four-wheel drive and more durable tires, the going is often difficult to avoid getting bogged down in mud or sustaining a flat tire on rocky roads.

The area team made that arduous journey to get to the remote village of Marolava and partner with a local church to share the Gospel through Operation Christmas Child. A girl named Tsodrano, which means blessing, and her little sister were among those who received a shoebox gift there. Tsodrano was fascinated by the flashlight and extra batteries she received among the gift items.

Her whole family shared that fascination as they gathered around the child at sundown to enjoy the illumination of the darkness in the village, which doesn’t have electricity. Their neighbors joined in the fun, basking in the ability to see their surroundings at night.

When a local church leader followed up with the shoebox recipients, the family shared their nightly practice of gathering around the flashlight. She told them about Jesus, the True Light of the World, and invited them to church to learn more about Him.

The family started attending the congregation and within a few weeks, 12 family members including Tsodrano, her siblings, cousins, and aunts, expressed their wish to follow Christ and be baptized.

Rejoice with the area team and praise God for how He used a flashlight to shine the Light of Christ into this family. Pray for the team as they travel treacherous “sand roads” to reach more remote villages with the hope of the Gospel.

By Farm Truck
A pastor took shoebox gifts to a remote village in Cambodia using a farming trailer. An 11-year-old girl was one of the 120 children who heard the Gospel and received a shoebox gift in the village. She graduated from The Greatest Journey discipleship program and is telling her family about Jesus. What’s more, she asked her teacher if they could start a small church in her village. The pastor who transported the shoebox gifts to the village is now leading a new house church consisting of 10 families.

Pray for this pastor as he shepherds this new congregation and for children like this girl who are stepping out in faith to share the Gospel.

By Motorcycle, Horse & Foot
There are three modes of transportation to get to the mountainous region of the southern Philippines—motorcycle, horse, and by foot—and the Operation Christmas Child regional team has used these to reach remote villages. 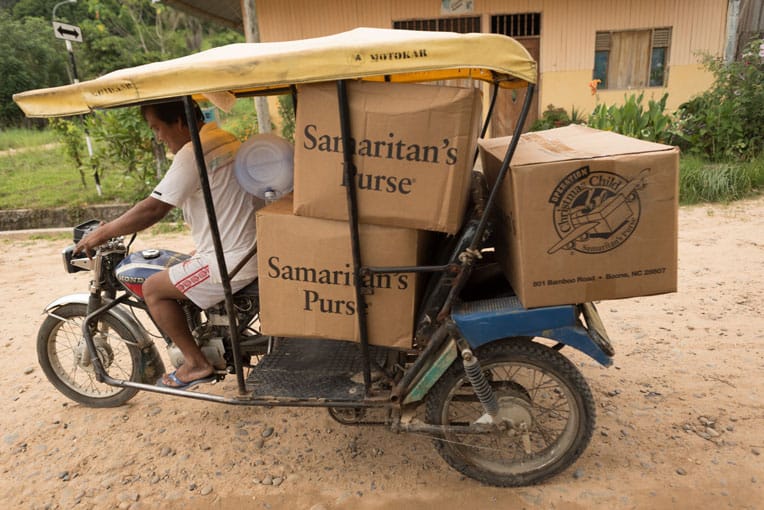 Going to places where there are no roads sometimes means not being able to transport shoebox cartons in bulk. Whether by motorcycle, horse, or by foot, our global volunteers carry each shoebox carton where it needs to go.

Last year, they traveled to a 400-household village of vegetable farmers to share the Gospel in partnership with a church in the province. They encountered muddy paths and streams to cross, followed by steep mountain roads before reaching the top where the outreach event was held.

Mervin, 11, was one of the children who attended the special event. Born with polio and unable to walk or talk, he wasn’t used to being able to participate in many children’s activities. So when the pastor handed him a shoebox gift, he smiled widely. Team members thought they may even have heard him laugh.

His sister, Anna, was glad not only to receive a shoebox gift herself but also to see that one brought such happiness to her brother. After graduating from The Greatest Journey classes, she became an active part of a new congregation that the regional team started in their village.

Praise God for how an act of kindness paved the way for a new church to proclaim the Word of God in the remote village. Pray for the regional team as they employ ingenuity and grit, fueled by faith, to transport shoebox gifts through difficult terrain in Jesus’ Name. 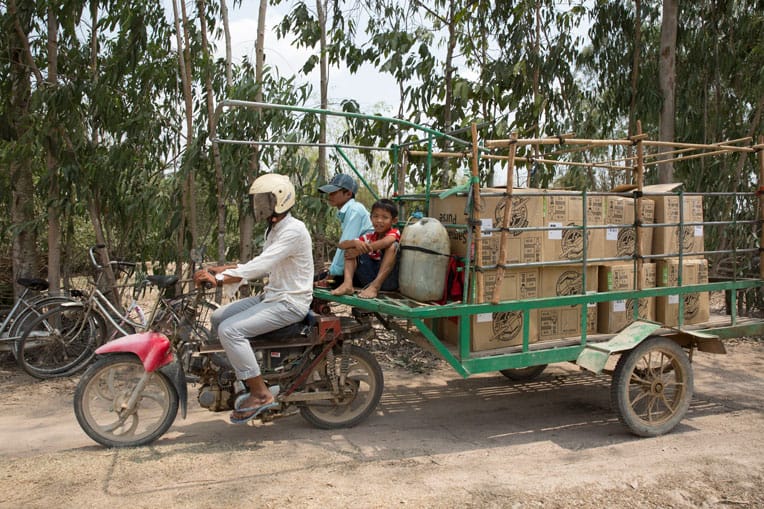 Sometimes finding the types of vehicles that can transport dozens of shoebox cartons requires as much ingenuity from our ministry partners as the journey itself. Teams use everything from farming trucks and tractors to ox carts and bicycles to transport shoeboxes.