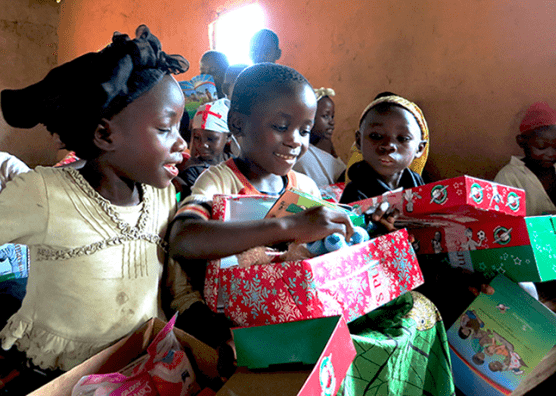 “The main thing was being able to stay alive.”

That’s how Foday Kpanabom describes his life in Sierra Leone when rebels attacked his village in 1995. Just 10 years old, Foday and his four younger siblings, along with their mother, fled the violence and ended up in a large city, begging and doing odd jobs to survive.

One day, Foday was invited to a church event. While he was there, Foday and the other children heard about someone who loved them very much. The church gave the Gospel invitation and Foday relates that “many of us received Christ.”

Then came a special moment, as Operation Christmas Child shoeboxes were handed out to all the children (whether they had accepted Christ or not). The shoeboxes held gifts like paper and pens, soap, hair bows and combs, and toys.

“When I think about it, opening the box,” Foday recalls, “I don’t really have words that express it properly-Your parents weren’t thinking about getting you toys; the main thing was having something to eat. Do you have something to play with? Nobody really cared about that.”

The boxes not only had toys, they also served as a reminder of the love that God has for them. “It was knowing that somebody, somewhere, somehow cared,” Foday explains.

Now living and working in Canada, (he arrived with his siblings in 2006), Foday tells his Operation Christmas Child shoebox story whenever possible, chronicling his journey from war and displacement to life in Canada.

The shoebox full of gifts continues to play a major role in his life story, brightening a dark period in his past with the love of God and the kindness of people on the other side of the world. “It felt like, you know what? There is somebody out there, somehow (who cares for me). There is hope.”