Doors Opening for the Gospel Among the Saramaccans 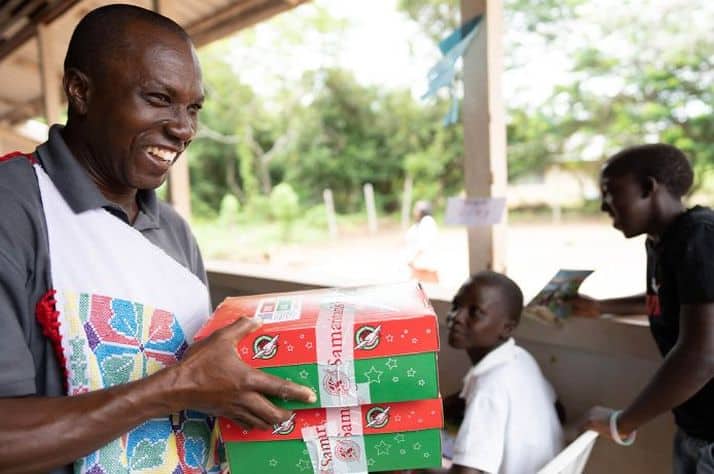 
Romario grew up in the riverside village of Duatra, deep in the jungle of Suriname, along the eastern coast of South America.

As a young child, he knew nothing of Jesus Christ, and there was no church for him to visit. Yet his thoughts kept returning to the idea that there must be a God who made everything.

“I always had a hungry heart, looking for something special,” he said. “I knew there was something missing in my life.” 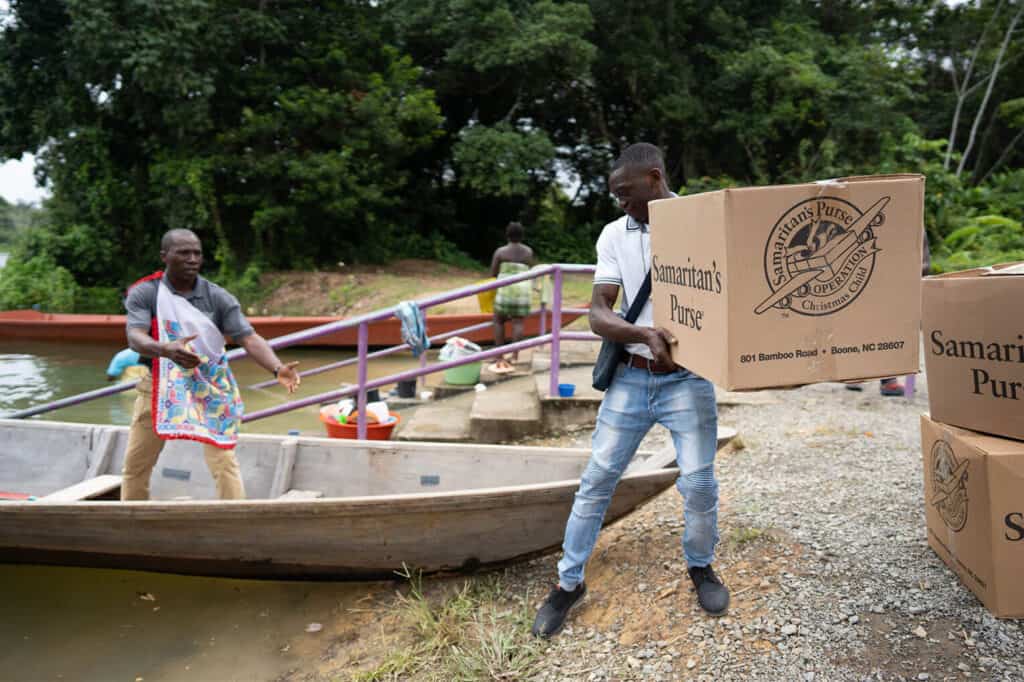 Romario moved several times as a child, and, by his teen years, he was living closer to the country’s capital. He found a strong church, led by Pastor John Amoida, and there God saved him. He also became quite sick around the same time, but was healed and praises the Lord for that testimony.

“I became so sick that I could not breathe properly and I ate with great difficulty; I also started to get stomach pains,” he recounted. “But God had not forsaken me, and the congregation started praying for me until I was healed….Thank you, Jesus!”

Now, at 21, his greatest burden is for his family, friends, and entire home village to come to repentance and saving faith in the Lord Jesus Christ.

“Living in a village without Jesus is sickness and death,” he says.

“Living in a village without Jesus is sickness and death.”

Romario and Pastor John are both convinced that the path to changing that—to bringing light and life to Suriname’s Saramaccan villages—runs through Operation Christmas Child.

The Saramaccans are descendants of African slaves who escaped and formed their own culture and language—a mix of African dialects, Portuguese, English, and Dutch—throughout Suriname’s interior centuries ago. They gained their freedom from the Dutch Crown in 1762. Until recently, they mostly kept to themselves, far from others, and worshipped objects in nature, such as snakes and trees. They are one of thousands of unreached people groups around the world among which believers are few and most have never heard the Gospel of the Lord Jesus Christ. 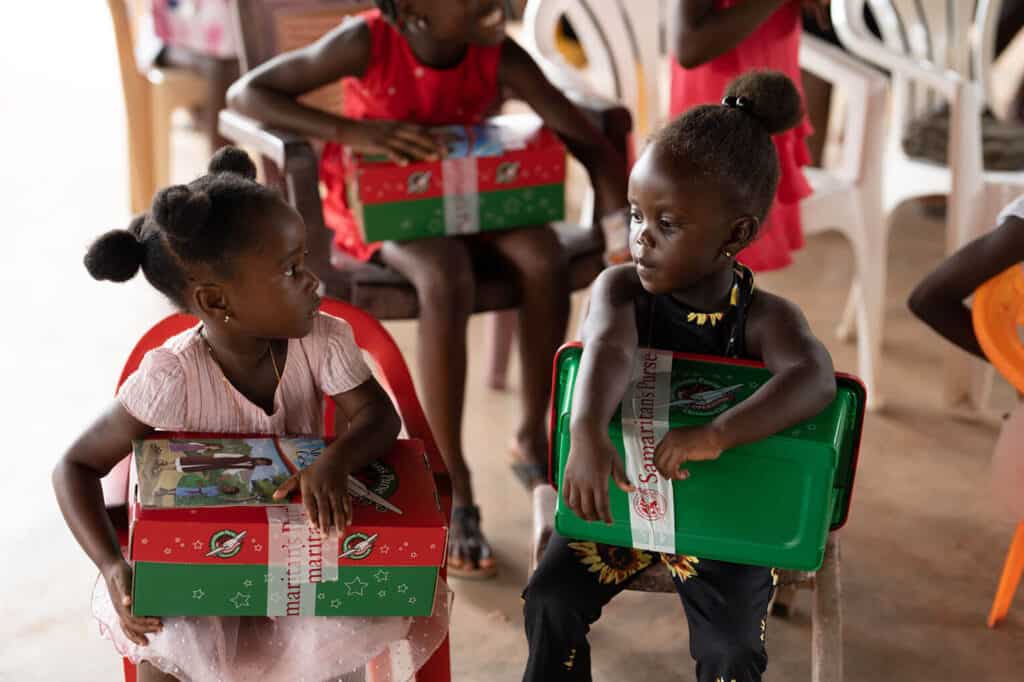 Both Romario and Pastor John are Saramaccans; John also serves as Suriname’s Operation Christmas Child church mobilization coordinator. The two Christian brothers have a vision to reach Duatra within the coming year.

“The shoeboxes are an open door for us to spread the Gospel to the unreachable people, both the children and their parents,” Pastor John said.

Romario agrees. His face lights up when talk turns to the impact he believes that Operation Christmas Child can have on his community. “I want them [people in Duatra] to feel it, touch it, see it—the love of God.”

Today, many people in Duatra and other Saramaccan villages still practice traditional animistic religion. They have many rituals and rules on what not to touch; they cast spells; and regularly go to a small shrine where they call on the spirits of snakes, trees, monkeys or similar things to help them.

“In a word, they don’t believe in the living God,” Romario said. 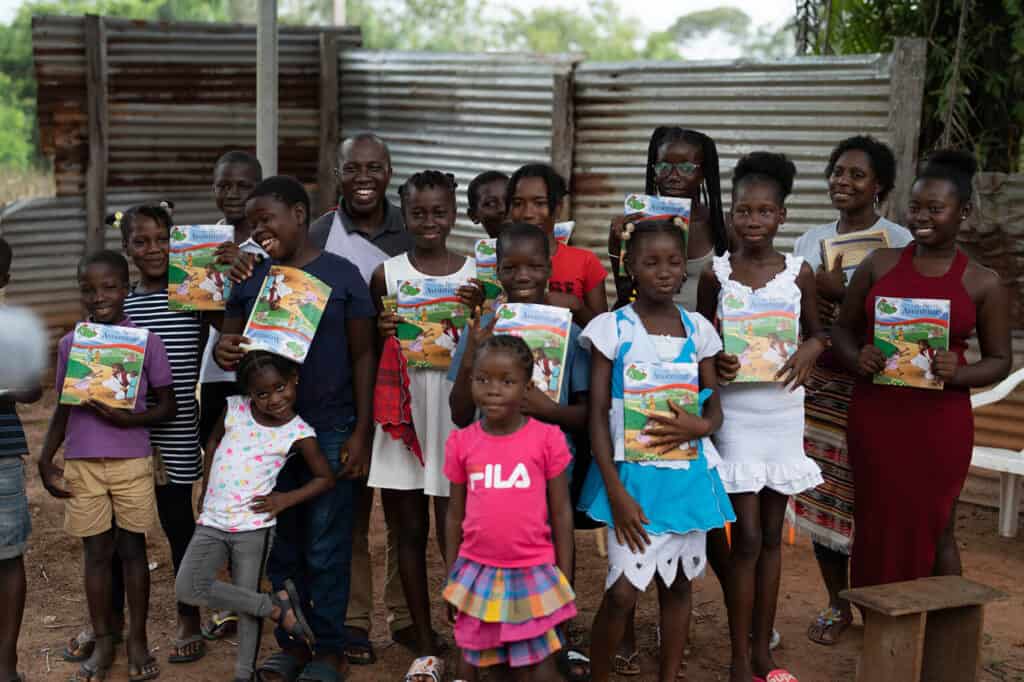 Pastor John (back row, second from far left) is excited to see Saramaccan children now learning the Word of God.

But the spiritual atmosphere is changing. As Romario visits during school vacations or others visit him, they can see something is different about him, Pastor John said. “They see something’s happening with him. The door is opening.”

“The shoeboxes are an open door for us to spread the Gospel.”

Duatra will soon be another outreach point among a few Saramaccan villages where Operation Christmas Child is already at work distributing gift boxes to children and leading The Greatest Journey discipleship classes. As children up and down the forest rivers receive the Gospel and are discipled, that opens up opportunities for their parents, siblings, and friends to hear the Good News too; and then groups of believers form, ultimately leading to new churches. The forests will resound with worship of the one true God. That’s the goal.

Going from “nothing to something,” in Pastor John’s words, is not easy. Some Saramaccan areas can be difficult to access—requiring long trips by boat—and there’s not usually a welcome mat for Christians. But Operation Christmas Child recently celebrated an outreach event in the village of Drepada in the district of Brokopondo. 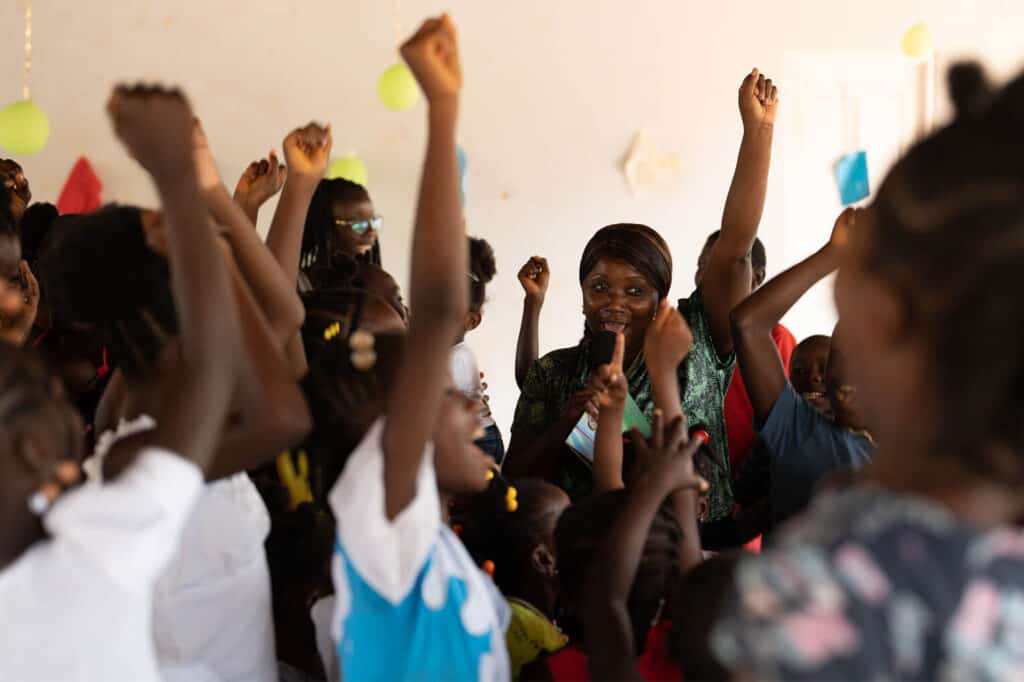 Wendy helped lead an outreach event in a Saramaccan village earlier this year.

Wendy, another Saramaccan member of Pastor John’s church, was among those who presented the Gospel and distributed gift boxes to about 70 children. “I love it,” she said. “People told me about Jesus, so I love sharing Him with others.”

Leaders in Drepada were not receptive to Operation Christmas Child until recently. But Wendy teaches in a school nearby and her influence helped open the doors.

Dana, who serves as a regional discipleship coordinator for Operation Christmas Child in Suriname, was also at the recent outreach and led the first session of The Greatest Journey discipleship course. “I care about the Saramaccans, because I am Saramaccan,” she said. “Without Jesus we are nothing.”

She continued, “They need Jesus. We all need Him. I care about my people. If I don’t, who else will?” 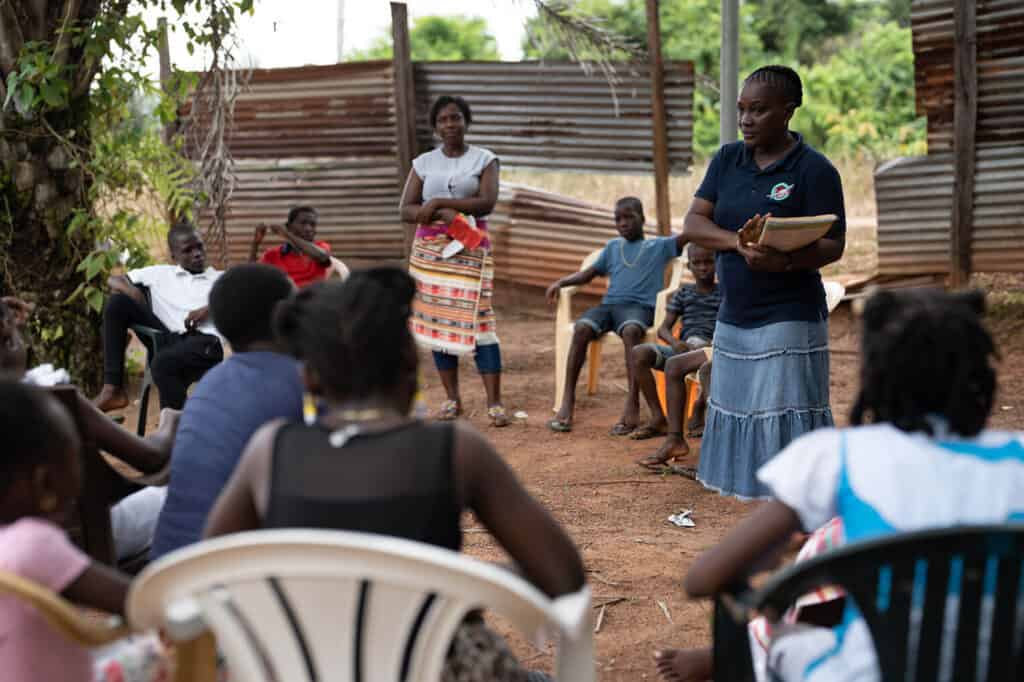 Saramaccan communities have been hit hard by drugs, suicide, poverty, and issues surrounding the gold mining industry. As a boarding school teacher, Dana sees the suffering firsthand and knows hope for change begins with the heart. That’s why she’s using the 12 lessons of The Greatest Journey among her pupils, showing them step-by-step how they can be friends with Jesus. Her students’ behavior and outlook are changing, she said, as they learn from the Bible that God created them and loves them.

“We believe if the children can be reached, (then) they can change the future in the area where they are living,” Dana said.

In Drepada, 12-year-old Chadelfa was among those starting to discover the truths of God’s Word. She received a shoebox filled with a ruler, pencils, crayons, a yo-yo, and washcloth, among other items, and participated in The Greatest Journey class. 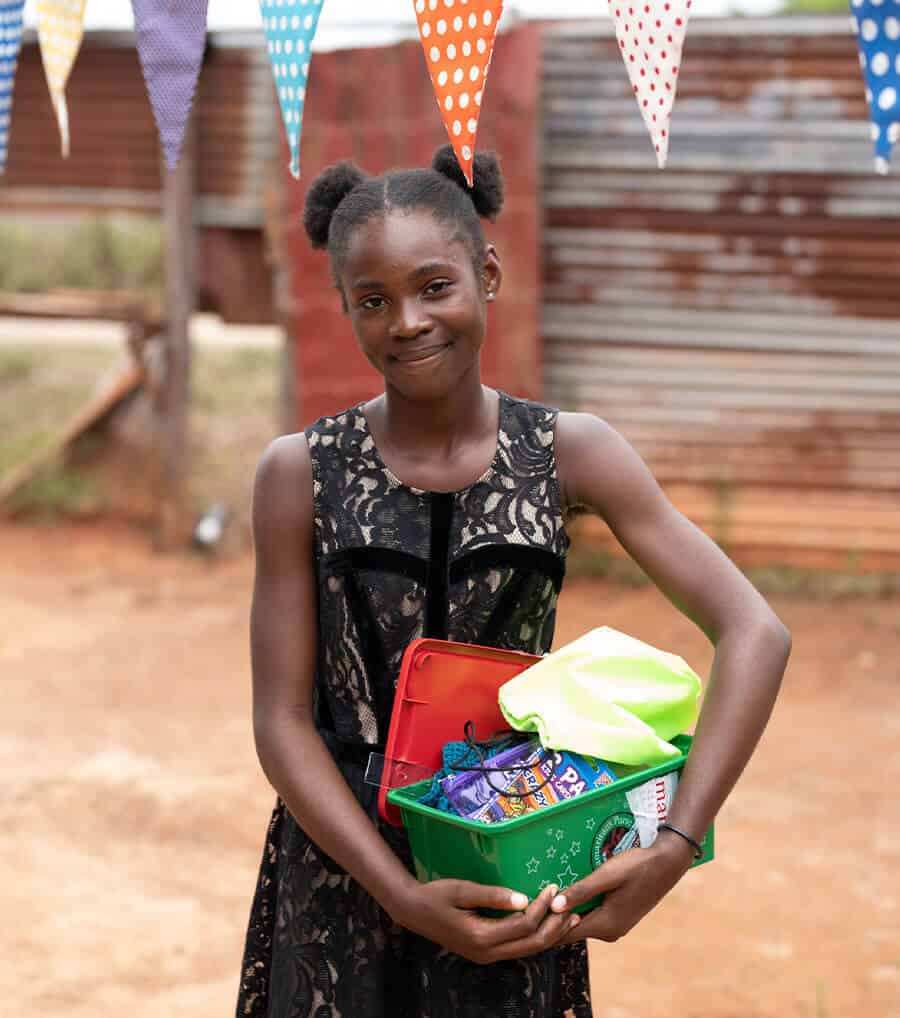 Chadelfa received a gift-filled shoebox at an outreach event in Drepada.

“I’ve learned you must be kind and not curse anybody,” she said. It’s a simple application but a profound one for children who are hearing about God’s ways for the first time.

Dana’s desire, like that of Wendy, Romario, and Pastor John, is to bring Good News and great joy to many more Saramaccan children in the coming years.

“My vision is to reach the other ones where we haven’t been there. They need to hear the Gospel,” she said. “We have to go farther. My prayer for the Saramaccan people is to open the door—to give us a chance—to hear what we have to say about Jesus.”

Please remember to pray for the Operation Christmas Child team in Suriname. Ask that God would grant them many opportunities to share the Gospel with the Saramaccan people and many others who are not yet walking with Jesus. 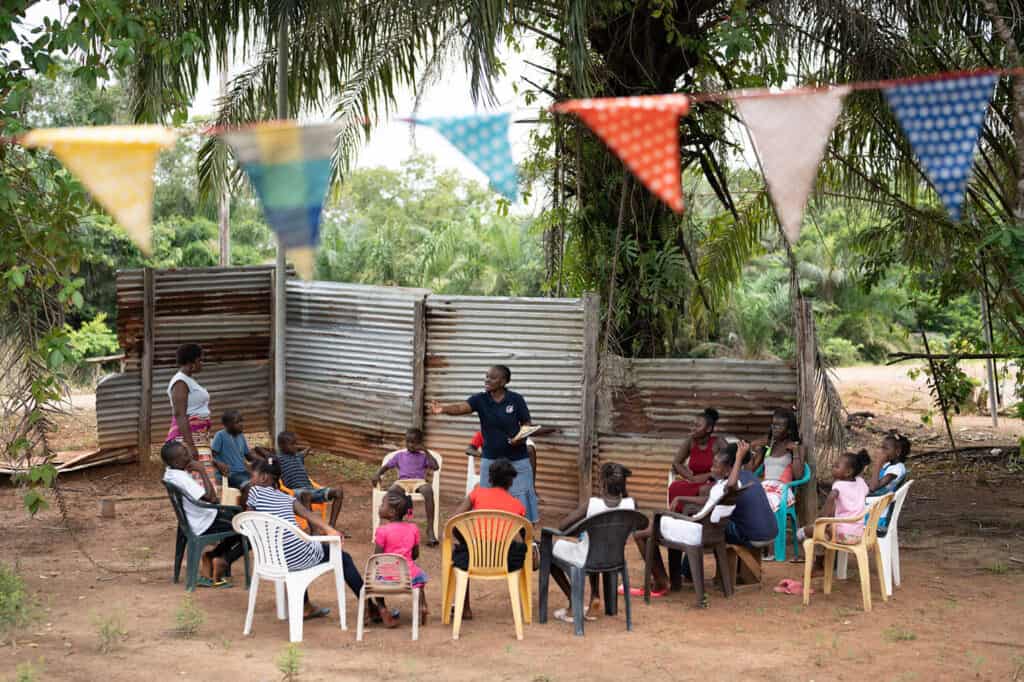 Saramaccan children learned more about Jesus Christ as they participated in The Greatest Journey discipleship class.