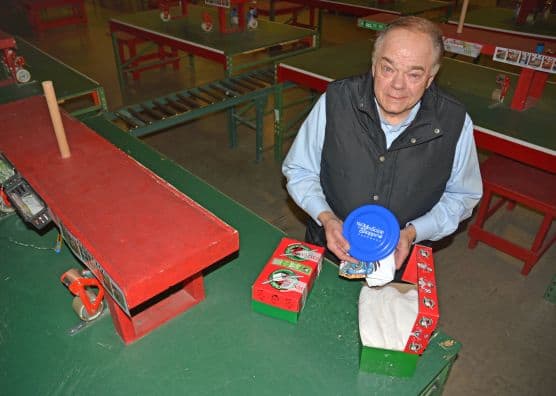 Broadcast journalist Darrel Janz has had a remarkable career, including receiving a handwritten letter from Billy Graham, covering the 1970 FLQ crisis in Quebec, receiving multiple awards and honorary degrees, and covering the 1984 and 1988 Olympic Games.

But in the end, what sticks out in the 72-year-old High River, Alberta resident’s mind is seeing the looks on the faces of children in war-torn Bosnia and Croatia when they received Operation Christmas Child gift-filled shoeboxes packed by generous Canadians like you.

“If you ask me to name one career highlight, it was that 1995 trip to Bosnia,” he said. “That year, I told the Lord I’d love to do something with Samaritan’s Purse and that’s what happened.”

In 1995, Operation Christmas Child had only existed in Canada for two years, but “Southern Albertans took to it like no other place,” so the CTV Calgary station where Darrel was news anchor decided to send a cameraman to film shoebox distributions in the former Yugoslavia.

Says Darrel: “The cameraman convinced our bosses that it was too big a job for just him, so I was called in and asked if I wanted to go and I said, ‘You bet!'”

Darrel joined a team that included Samaritan’s Purse International President Franklin Graham. During a week in the region, they handed out shoebox gifts to children at seven distribution events.

Included in Darrel’s luggage were two shoeboxes packed by his wife. He gave the first one to a young Bosnian Muslim journalist and mother who had lost her husband in the bitter ethnic wars that lasted from 1991 to 2001.

“I gave her a shoebox for her daughter and she just sobbed, put her arms around me and hugged me, which no proper Muslim girl should do,” Darrel recalled with a note of amazement.

The other box was packed for a boy and it went to a youngster who’d also lost a parent in the conflict. “The boy was just ecstatic,” Darrel said.

Shoebox gifts warmly received by all

Much of the Operation Christmas Child team’s time was spent in Muslim-dominated Bosnia and Darrel found the Bosnian people “were wonderfully receptive and so appreciate of what Samaritan’s Purse was doing.

“One man told Franklin, ‘If it wasn’t for you Christians, we would have died.'”

(Besides shoebox gifts, Samaritan’s Purse provided emergency supplies to many people in the region who were left destitute by the conflict.)

The warm, positive response from Bosnian residents stuck in Darrel’s mind, especially after his TV station aired a documentary on the Operation Christmas Child trip.

“After we ran the program, a lady phoned me and said she had a problem with Operation Christmas Child being Christian. I said, ‘That’s funny, because the Muslims in Bosnia didn’t. And the government officials we encountered welcomed the boxes with open arms.'”

Even today, the trip continues to resonate in Darrel’s mind and it helps him respond to anyone who raises concerns about Operation Christmas Child.

“If you had one opportunity to see a child open a shoebox full of gifts, you would be hooked. I’ve been involved in a lot of charities, but I’ve never seen one that provides as much joy as these shoeboxes.”

Please join Darrel in packing shoeboxes for children who may have never received a gift in their entire lives. To them, you will be a Godsend.