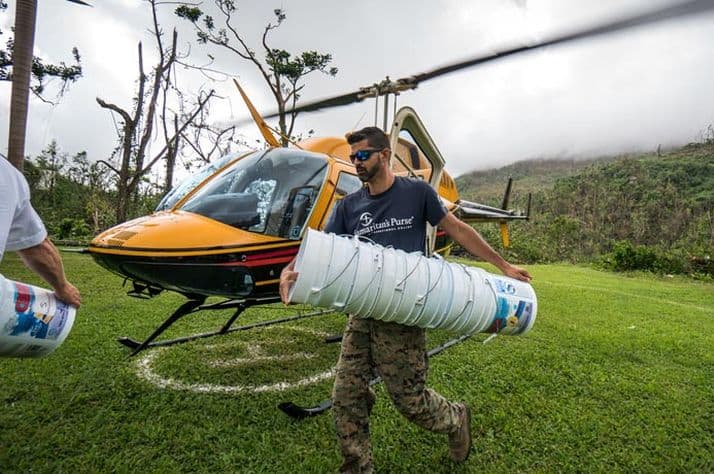 Hurricane Maria toppled a palm tree onto a corner of Gigi’s home in Puerto Rico. For weeks, every time it rained hard, water leaked into her house. As an elderly woman living by herself, there was little she thought she could do. 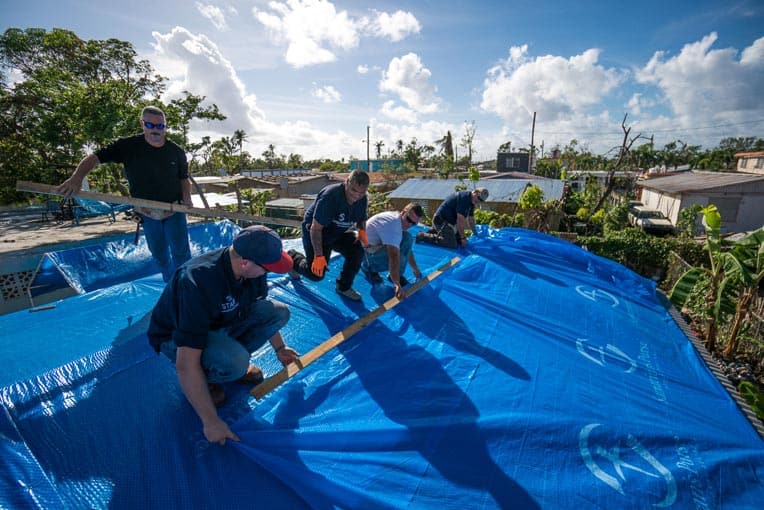 Puerto Rico is covered in blue—more than 70,000 tarps have been distributed. This team installed the tarp on the home of a widow whose husband was killed in Hurricane Irma (before Maria).

So, she was grateful this fall when a Samaritan’s Purse team came by with heavy-duty plastic sheeting (tarp) and a desire to serve her in Jesus’ Name. The team repaired the corner and covered her roof with our signature blue plastic.

That day, one of our team members also took the opportunity to talk with Gigi about the Gospel. She found her New Testament-only Bible, and they started discussing Romans 10:9-13. As the team gathered around, the moment arose to pray with Gigi as she received Jesus Christ as her Lord and Savior.

She rejoiced that day for both a dry home and a new heart.


“We thank God for his faithfulness through this response and pray for the churches we’ve partnered with that they may continue to reach out to their communities after we’ve left and that the response may be a springboard for continued opportunities for their lights to shine.”

“We thank God for his faithfulness through this response and pray for the churches we’ve partnered with that they may continue to reach out to their communities after we’ve left and that the response may be a springboard for continued opportunities for their lights to shine.”
-Samaritan’s Purse Canada International Disaster Relief Manager, David Bock

“What we heard over and over was, ‘Thank you for not forgetting us,’” says Melia Hayes, a Samaritan’s Purse Canada employee who recently returned from Puerto Rico. “Some of the communities in the mountains we were able to reach (thanks to the SP helicopter), had been isolated for a month with no way to get out and no way to get help in.”

“It was so encouraging to see the churches of Puerto Rico come together to reach out to the most vulnerable people in their communities,” says Hayes. “We provided practical support to these dedicated churches enabling them to build relationships and share a message of hope.”

Gigi is just one of tens of thousands of people on Puerto Rico who have been helped by Samaritan’s Purse since Hurricane Maria used its Category 5 strength to batter the U.S. territory in September. During the past few months, we have mounted a multifaceted relief response—distributing food, water filters, generators, tarp, and more.

In most cases, we’ve worked closely with local churches to identify those in need and get emergency supplies to them.

Both the churches and our staff are eager to serve those most vulnerable as the island continues its long recovery.

Shining as the Body of Christ 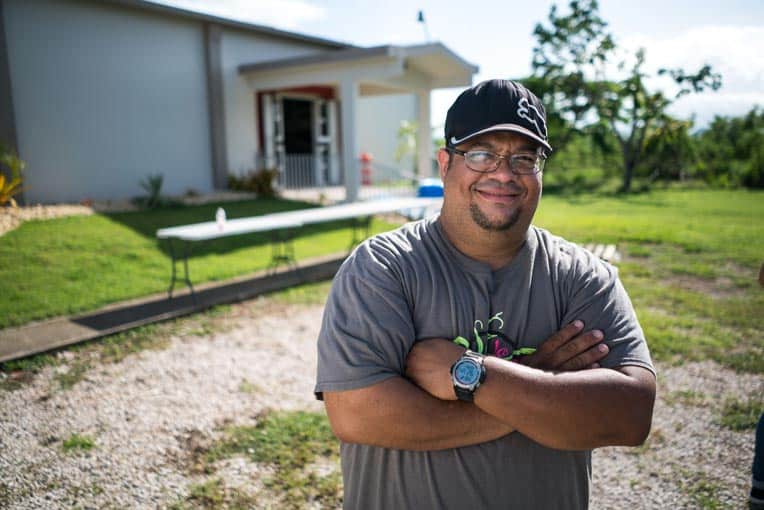 The Federal Emergency Management Agency and Samaritan’s Purse are partnering to get food to communities in need, and we’re working through local churches to facilitate the distributions. So far, Samaritan’s Purse has assisted congregations in distributing food for nearly 30,000 households, some of whom still lack electricity.

Pastor Jose Orlando Colon and his wife Karen lead a church we partnered with in Coamo, in southern Puerto Rico. They were praying for a way to help their town. When Samaritan’s Purse DART member Tom Ovington called and asked if the church could help facilitate a food distribution, they were ecstatic.

“If I could describe Samaritan’s Purse in one phrase: ‘It’s the answer of God,’” said Pastor Jose. 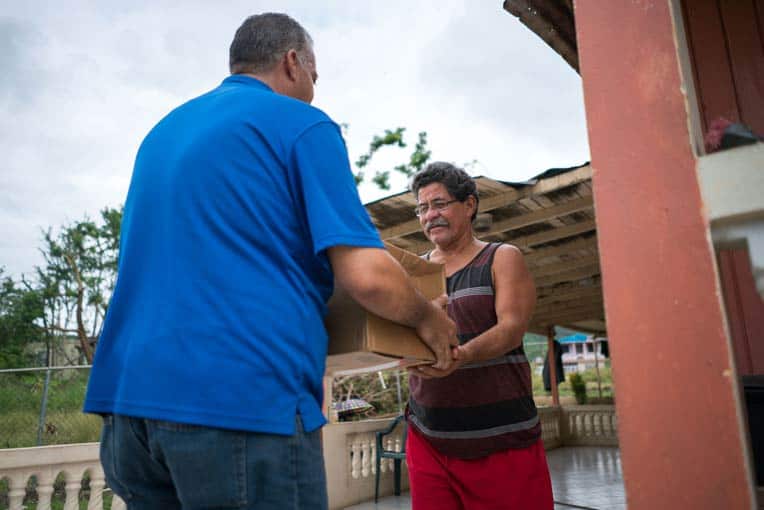 Local churches are distributing food to households in their area.

In mid-November, Pastor Jose’s church was able to pass out food for 1,100 households, plus some additional tarps and packages of diapers. Helping local churches get out into their communities is a major emphasis—and point of success—for the work of Samaritan’s Purse in Puerto Rico.

“I’ve been meeting with pastors, I’ve been telling them, guys, this is our chance to really shine as the body of Christ,” Tom Ovington said. “The churches have been very responsive and willing to work with each other.”

Samaritan’s Purse and local churches also got some help in the work from a special group of collegians. Eight Liberty University students traveled to Puerto Rico for several days to help with various projects, including preparing food boxes for distribution. 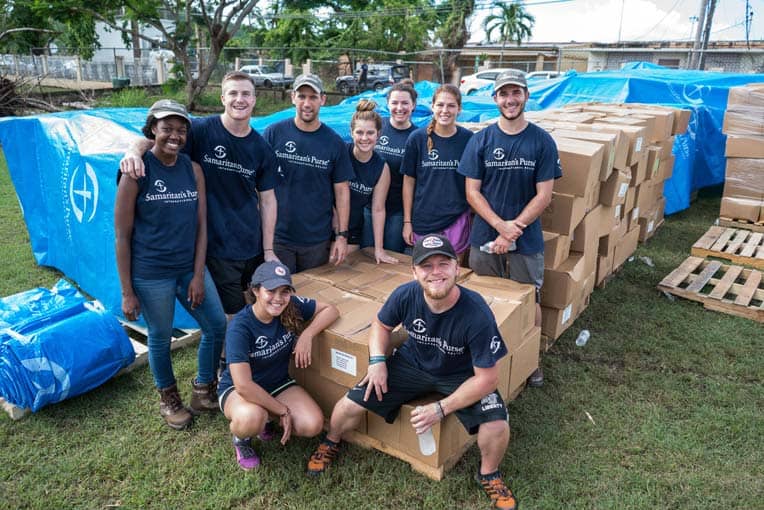 A Liberty University team put in extra effort to help with food distribution.

“I love how Samaritan’s Purse is working with the church, so we’re not dropping stuff down and leaving,” said senior Cam Kennedy. “We’re empowering the local church to then share the Gospel with people, to be seen as a safe space and a refuge.”

Nahiris Aranzamendi was among the Liberty students and felt blessed to return to her home in southern Puerto Rico to help out. She had just started her graduate studies in Lynchburg, Virginia, when Maria hit, so she felt bad that she wasn’t there to support her friends and relatives. She was amazed that the Lord brought her back to serve and share.

“We have an eternal hope. That’s something important that we need to take to Puerto Ricans in this time of recovery,” she said.

Delivering Relief to Areas in Need

In addition to our food distributions, we’ve given out nearly 7,000 solar lamps, half a million chlorine tabs, and 22,900 water filters, plus thousands more buckets and jerry cans. In certain remote areas—where residents were trapped by blocked roads and had neither running water nor power—some people resorted to drinking from local streams. Once they got our filters, they had ongoing access to clean water. 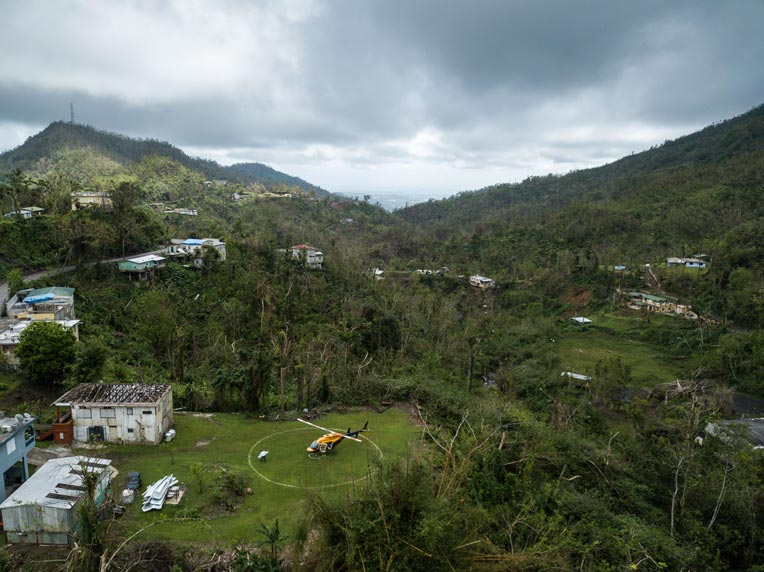 Our helicopter has made hundreds of trips across Puerto Rico to deliver relief supplies and transport personnel.

We’ve also distributed more than 1,300 generator kits, which are in high demand since many areas remain without power. We have focused on providing these machines to people with serious illness (for example, those on oxygen or who need to refrigerate medicine); to community/youth centers; and to churches so they can hold worship services.

For more on distributing generators to those with medical needs, see “Mobile Medical Teams Complete Work on Puerto Rico,” which also covers our mobile medical clinics.

We have utilized our helicopter to make numerous deliveries of our relief items in the central mountains where access has been restricted due to downed power lines, landslides, or floodwaters.

The helicopter has currently made more than 675 trips around Puerto Rico, moving dozens of staff members and tons of relief supplies.

Going Above and Beyond 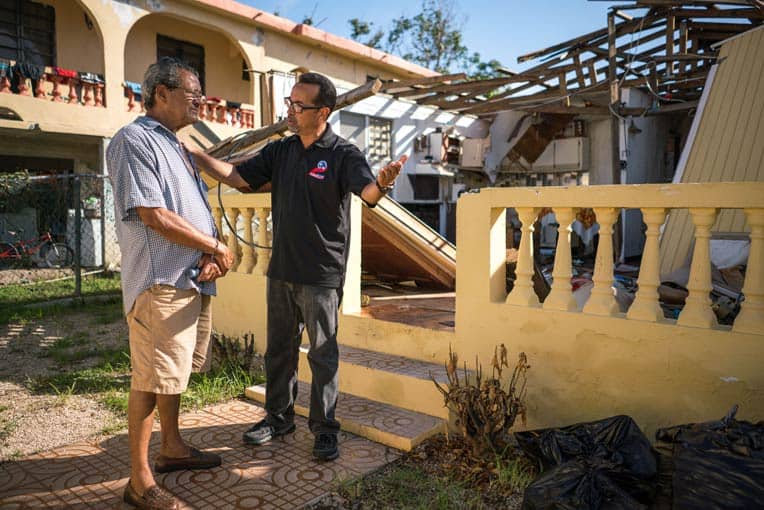 Pastor Miguel Ortiz encourages a homeowner who received a generator and tarp from Samaritan’s Purse.

Finally, Samaritan’s Purse has to date given out over 72,000 tarps on Puerto Rico, helping so many households stay dry until repairs can be made.

In some areas, we’ve even deployed a tarping team to install the plastic sheeting for those unable to do so themselves. We’re focused especially on the sick and disabled, the elderly, and single mothers, and have completed scores of homes in lower-income areas.

“We just try to get them out from the weather,” DART member Al Miller said. “The need for our help is so great.”

He remembers one woman whose home had a wall that was pushed in 18 inches. One of our teams pushed it out, fixed trusses, and tarped her roof. The change in her countenance was dramatic after seeing our work and Christian witness.

“Boy, the smile you saw on her face after we gave her a Bible and prayed with her,” Al said. “That’s what Samaritan’s Purse is about: giving hope—giving hope through Christ.” 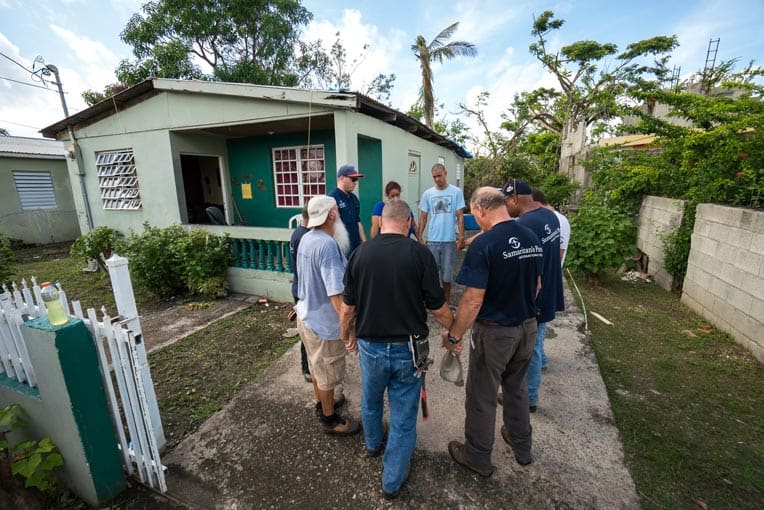 Our tarping installation teams pray with families that we help.

Miguel Ortiz, a local pastor, joined our tarping installation team as a volunteer for two weeks. He saw God at work in multiple ways through our efforts. Helping hands and a pause for prayer encouraged those still wrestling with the loss and pain that Hurricane Maria caused.

As he sees Samaritan’s Purse and local churches partner together for Puerto Rico, Pastor Miguel said he trusts the promise of Galatian 6:9: “And let us not grow weary while doing good, for in due season we shall reap if we do not lose heart” (NKJV).

In faith he added, “Eventually, we’ll see the harvest. I have that hope.”

“Eventually, we’ll see the harvest. I have that hope.”
—Pastor Miguel Ortiz

Samaritan’s Purse will continue relief efforts in Puerto Rico through the end of 2017. Please pray that our DART finishes well and pray that God will bring many to Christ through the witness of the Church.

*Numeric totals are the latest available and accurate through Dec. 11.