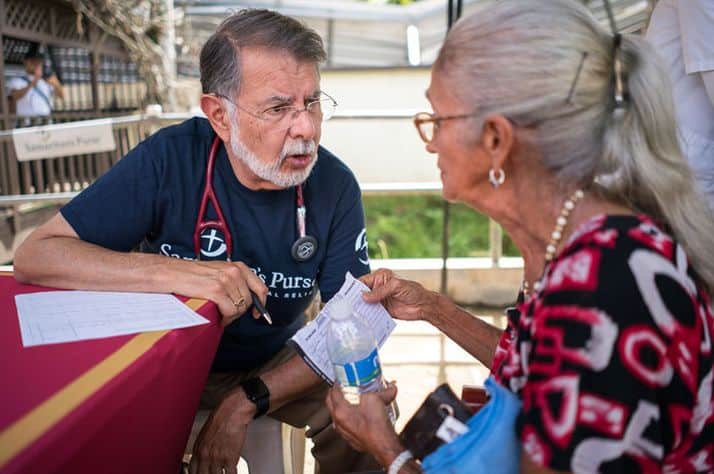 As part of our larger response to Hurricane Maria, Samaritan's Purse teams saw thousands of patients. Generators continue to be distributed to those with serious medical needs.

Hurricane Maria roared over Puerto Rico’s coasts and mountains on Sept. 20 ripping up power lines, destroying bridges, tossing off roofs, and precipitating a gasoline shortage. In the wake of the storm, many people found themselves in a soaked home, without electricity and without running water. 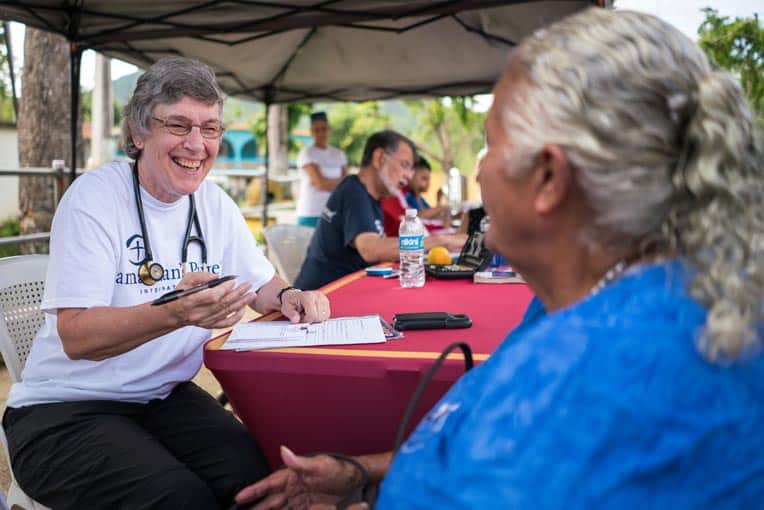 Julie Baker brought a smile and the love of God to her conversations with patients.

Those on the island who were already battling serious illness faced particularly steep challenges. When everyone’s focus turns to keeping dry and getting food and water, there’s no time to wait in long lines at the gas station or make a two-hour detour around a crumbled bridge to obtain a prescription. And such scenarios assume the doctors and pharmacists are even available to help. Their homes and workplaces were also damaged—and some number of medical providers simply left for the U.S. mainland before or right after Maria hit.

In response to this gap in healthcare, Samaritan’s Purse deployed medical teams to meet the needs of Puerto Ricans whose access to standard treatment had been interrupted by the storm. A total of three teams conducted free mobile medical clinics serving more than 3,100 people between Oct. 15 and Nov. 30. We went to rural and underserved areas and also helped at-risk populations like the families of prisoners. About a dozen Canadian staff have served in Puerto Rico. 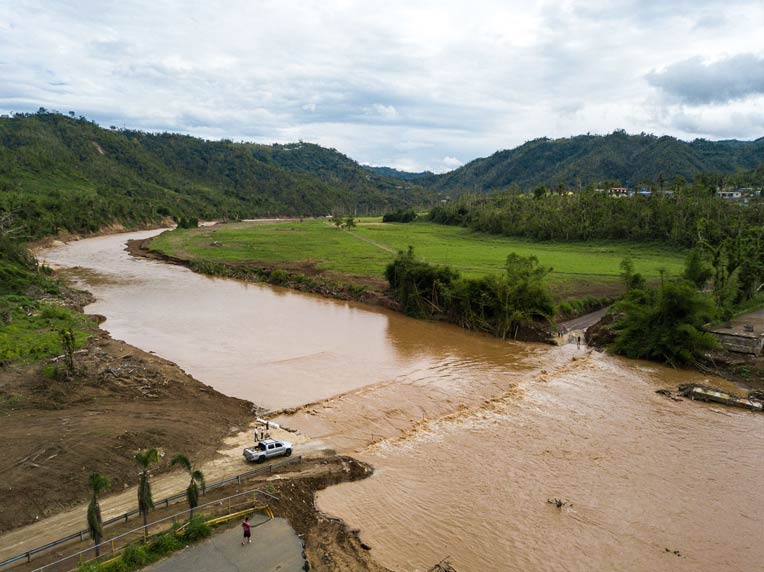 Impassable roads in Puerto Rico have prevented some from getting needed medical attention.

The most acute need was to assess and write prescriptions for those with chronic illness, including hypertension, hypothyroidism, and diabetes. Many of these conditions can become life-threatening if left unchecked and untreated.

“The biggest relief [we’ve provided] has been helping people with chronic diseases,” said Andres Morales, our onsite medical team lead for this response.

Samaritan’s Purse coordinated with local and federal government leaders, as well as other relief organizations, to identify locations in great need and made sure to integrate our work with the existing healthcare system. Our teams of doctors, physician’s assistants, and nurses took vital signs and provided high blood pressure medications, insulin, tetanus shots, and other treatments. More than half of the patients we saw received a needed prescription from us.

Ministering Beyond the Physical

Dr. Carlos de la Garza served in Puerto Rico in November and treated patients with uncontrolled hypertension and diabetes. He also saw people with issues such as asthma, back pain, and carpal tunnel syndrome that were exacerbated by the hurricane and the difficulties of daily life without electricity. 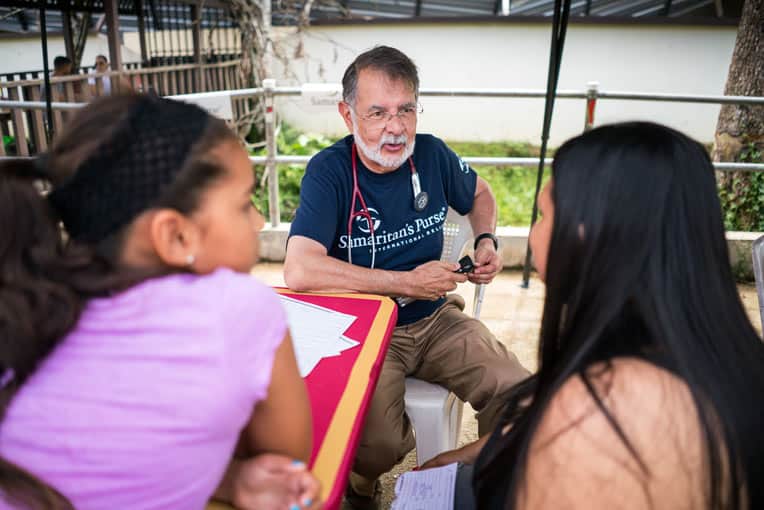 >Dr. Carlos de la Garza listened with compassion as he saw patients with a variety of ailments.

Despite many post-storm challenges, Dr. Carlos was impressed by the islanders’ strength. “Their spirits are so high. They are not resentful,” he said. “They have a very strong faith. They seem to go out of their way to help each other.”

When our teams met with patients, they made the effort to look beyond just a medical diagnosis. Julie Baker, a physician’s assistant who served with us in Puerto Rico, noted how just a few small gestures—a short prayer, holding hands, saying “God bless you”—seemed to make a big difference in patients’ attitude and countenance.

Dr. Andy Doyle, Samaritan’s Purse emergency medical response specialist, deployed to Puerto Rico for a week in November. He said our goal was to provide access to medical care for the most vulnerable as the overwhelmed healthcare systems tries to get up and running again. Hand-in-hand with our medical mandate, he emphasized the need for our Christian ministry of presence and compassion, citing Jesus’ healing of the leper in Matthew 8.

“We’re not doing very fancy medicine. We’re filling prescriptions and giving them what they need,” he said. “But what we’re really doing is reaching out to the people who are isolated and feeling overwhelmed, using medicine as a vehicle to let them know that they’re valued. We know they’re important because they are created in the image of God, and we’re reassuring them that we love them because of that.

“Hopefully that’s what we showed to the Puerto Rican people—we’re willing to come to you and do what needs to be done.”

Generators for Families in Need

In addition to our mobile medical clinics, Samaritan’s Purse is also helping to meet medical needs through the distribution of scores of generators to families with serious illness. 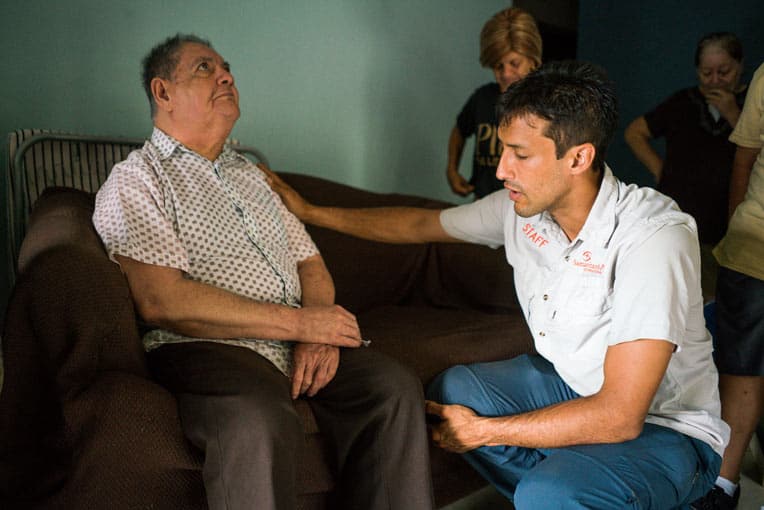 Andres Morales prays with Eugenio Rodriguez who received a generator from Samaritan’s Purse.

Eugenio Rodriguez, 70, and his sister, Maria Judy, 55, live together in a two-story home in rural Orocovis municipality. Eugenio is a blind cardiac patient; Maria Judy is on dialysis and her mobility is severely limited. Their brothers, Raul and Emilio, live nearby and serve as caretakers. We provided the family with a generator to help power a simple lift to raise Maria Judy from the first to second floor following her trips for dialysis.

Not far down the road, Blanca Judith Colon and her husband take care of their son, Victor Alexis, 41. He suffered serious brain damage due to epileptic seizures at age 3. The family was terrified as Hurricane Maria poured water into their mountainside home, and, when medical team lead Andres Morales recently visited them, they still lacked running water and electricity.

Andres presented Blanca with a new generator that she plans to use for Victor’s asthma treatments. “I thank you [Samaritan’s Purse] from the deepest part of my soul,” she said and then sobbed briefly. Andres prayed with her before leaving. 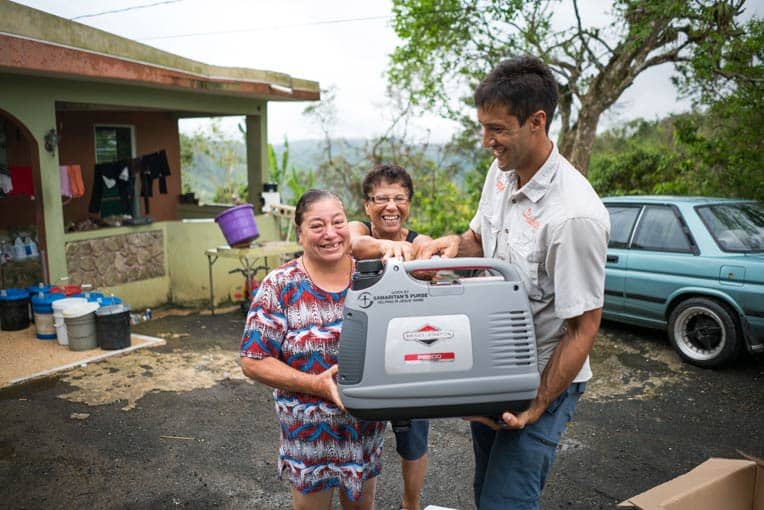 Blanca Judith Colon (at left) received a generator from Samaritan’s Purse to help her care for her disabled son. Her aunt, Elsa, is at center, and Andres Morales is at right.

Sometimes generators have gone to church and community centers as well to help with medical needs. For instance, we provided a generator to a church and school that used the machine to power a refrigerator where community members could store their insulin. Two of our generators also helped keep oxygen machines running for 12 people who had been displaced to a city hall.

Finally, in a few exceptional cases, Samaritan’s Purse was able to use our DC-8 aircraft to evacuate severely ill patients from Puerto Rico to Greensboro, North Carolina, where they were met by relatives.

Though our mobile medical teams have now completed their mission, much relief work remains to be done on Puerto Rico. In some areas, power may not be restored for months, finding clean water can be a challenge, and roads are not always passable. Samaritan’s Purse continues to distribute food, water filters, tarps, and generators. 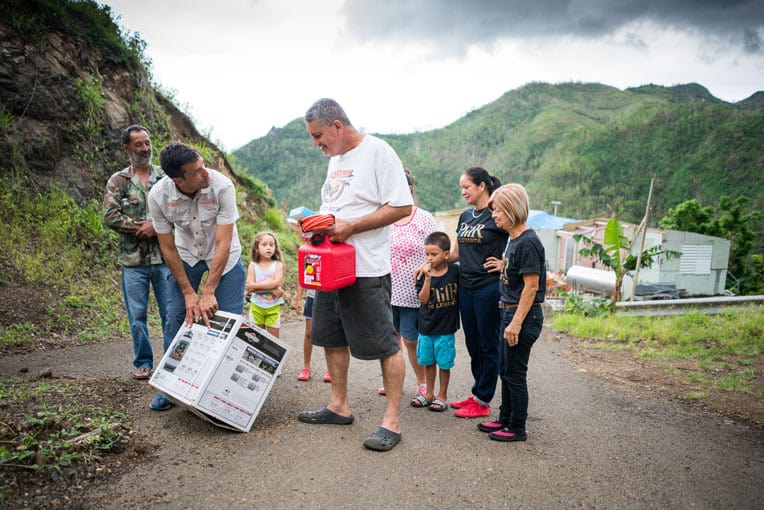 Emilio Rodriguez learns about the generator his family received from Samaritan’s Purse. It will be used at the home of his disabled brother and sister.