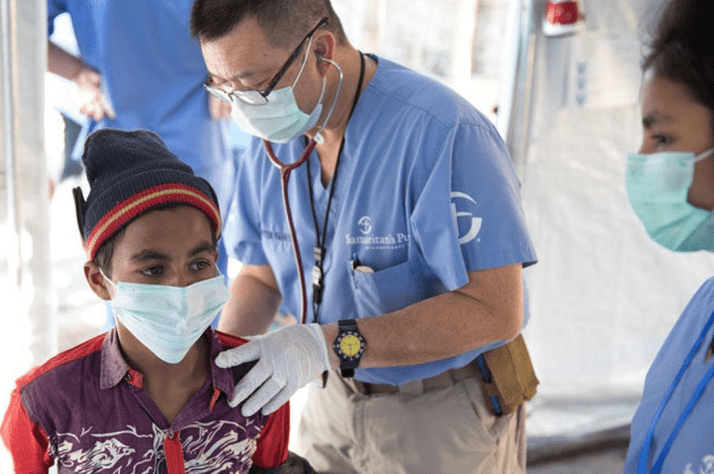 Solimolla was 37 years old when he became a widower. His wife died of an illness, leaving their three children—the youngest only 6 months—to grow up without their mother. 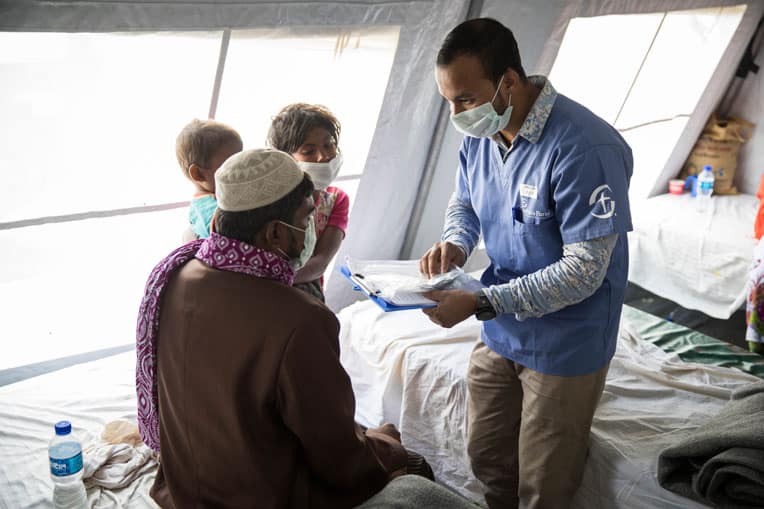 Solimolla and his family prepare to check out of the treatment center.

Life for this Rohingya family has only gotten harder, especially in recent months as they’ve had to learn to survive in a refugee camp in Bangladesh. Solimolla and his children and his brother’s family all fled to Bangladesh from their home in neighboring Myanmar.

Since last August, more than 650,000 Rohingya have made the harrowing journey across the border into Bangladesh.

They’re living in crowded refugee camps where they struggle to have enough to eat and to keep their families safe in houses that do little to protect from the cold and the rain.

Diphtheria has spread rapidly throughout the densely populated refugee camps. Samaritan’s Purse is providing lifesaving medical care to the Rohingya people who are suffering from this potentially deadly infection.

Since our Diphtheria Treatment Center began receiving patients on Jan. 1, we’ve treated more than 2,500 and admitted more than 500 for diphtheria (as of Feb. 9).

A Son Is Healed

Solimolla brought his 4-year-old son Abu to our center because he complained of swelling in his neck and had a fever. 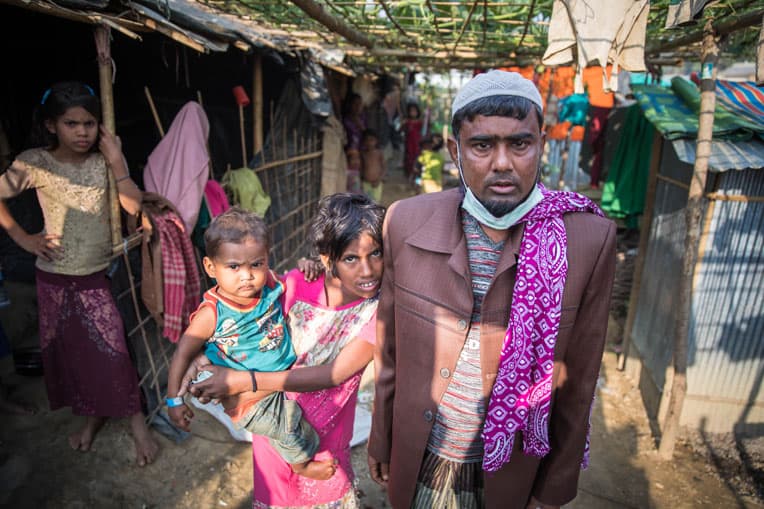 “I was afraid when my son was sick,” he said.

Most of the patients we treat are children, as diphtheria is more common and more likely to be severe among children. We are administering antibiotics and, in more critical situations, diphtheria antitoxin by IV.

Abu returned home two days after receiving treatment, much to his father’s relief. “I am very happy now that my son is better,” Solimolla said.

Though relieved and thankful for his son’s recovery, life in the refugee camp remains difficult for Solimolla. He left everything behind when he fled Myanmar and doesn’t have enough money to provide sufficient food or clothing for his family.

“Life in the camp is very painful,” he said.

Kindness During the Storm 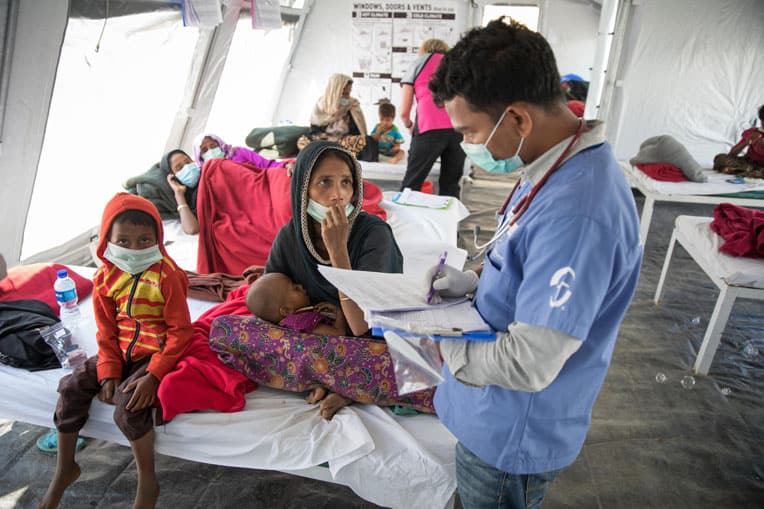 Shajeza’s 6-year-old son, Nur, was sick for seven days ​before coming to the Samaritan’s Purse Diphtheria Treatment Center. Nur had a high fever and his mother didn’t know what to do.

“I felt very sad when he was sick,” Shajeza said.

Shajeza, 35, and her husband fled from Myanmar four months ago with their seven children. Shajeza’s husband doesn’t have work in Kutupalong refugee camp, where our treatment center is located.

“I cannot give my children enough food,” she said. “I can’t buy fish or vegetables because I don’t have money to do the daily shopping.”

Life in the camp is hard, yet Shajeza said that her experience in our treatment center was “totally different.”

“The doctors and nurses are very friendly,” she said. “They have provided very good service.”

“The doctors and nurses are very friendly. They have provided very good service.”

Shajeza’s son, like every patient we treat, received compassionate care in Jesus’ Name. Nur felt better within just a few hours of our staff administering the diphtheria antitoxin.

“Yesterday, he was weak,” Shajeza said. “Today, he is stronger and responding. I am happy.”

Nowhere Else to Go

When 14-year-old Rayju arrived at the Samaritan’s Purse Diphtheria Treatment Center her neck glands were so swollen that she couldn’t eat or drink anything.

“She had a fever and throat pain,” explained her mother, Anawara. “I was very sad and upset.” 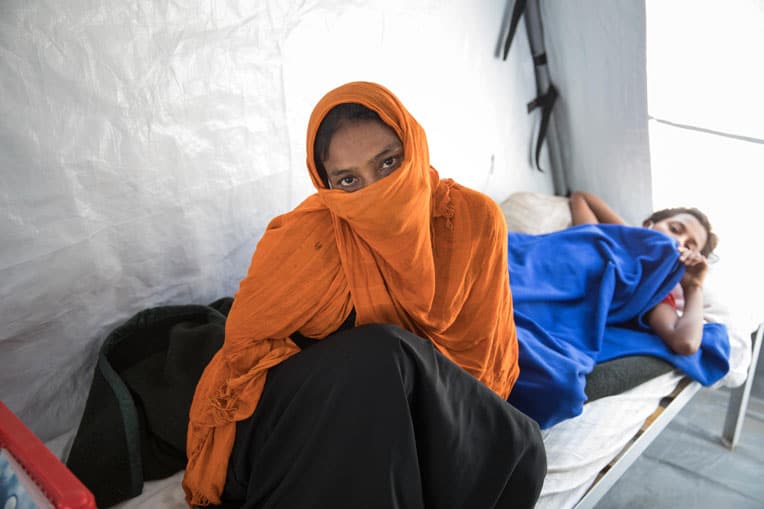 Anawara was grateful for the good care her daughter received at our clinic.

Rayju received antibiotics and diphtheria antitoxin. Anawara is thankful that her daughter came to our center, as she had nowhere else in the refugee camp to receive diphtheria treatment.

“The doctors gave very, very good care,” Anawara said. “My daughter is getting better and that makes me happy.”

Anawara came to Bangladesh with Rayju and her two other children, her mother, and two brothers. Anawara’s husband and another brother died a few months ago in the conflict.

As a widow in Kutupalong, Anawara said she is afraid. She doesn’t have a job and doesn’t have money to buy enough food. The family only has rice to eat.

More than 800,000 displaced Rohingya are crammed into Kutupalong refugee camp. Many are sick and malnourished. Please pray for the Rohingya during this time of crisis. Please pray for our medical teams as they demonstrate God’s love to hurting people.