Staff at our Diphtheria Treatment Center in Bangladesh are providing expert care for hundreds of refugee patients.

Kabir and his family arrived in Kutupalong refugee camp in Bangladesh with the clothes they wore and the food they carried. Already traumatized, they had no choice but to sleep on the streets until Kabir was able to piece together a house for his wife and seven children using bamboo, sticks, and plastic tarps. 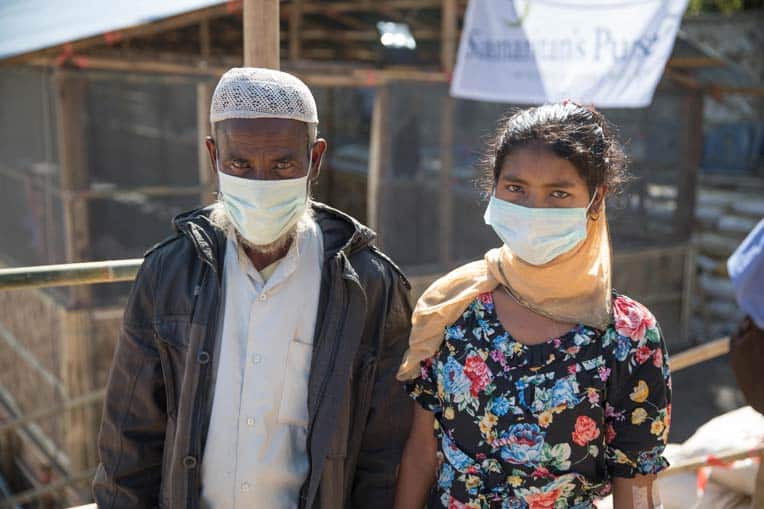 Kabir stands with his daughter Shonchita, who was cared for at the Samaritan’s Purse Diphtheria Treatment Center.

The family joined more than 800,000 displaced Rohingya people crammed into the camp. The densely-populated area has created a situation ripe for infectious diseases, including diphtheria.

Kabir and his 14-year-old daughter, Shonchita, came to the Samaritan’s Purse Diphtheria Treatment Center because Shonchita had a fever and swollen neck glands.

“She was very sick and felt very bad,” Kabir said. “I was worried.”

Throughout Cox’s Bazar District, where our center is located, more than 3,500 cases of diphtheria have been reported, most of whom are children.

Diphtheria is a bacterial infection that upsets the respiratory system by creating a thick membrane, or coating, in the nose and throat that makes breathing and swallowing difficult. The infection can turn deadly without immediate, proper treatment.

“Diphtheria is particularly terrible in children because their airways are small,” explained Dr. Elliott Tenpenny, Samaritan’s Purse emergency medical specialist. “Children who come in [to the center] are gasping for air. They are barely able to breathe.”

Although diphtheria can be treated with antibiotics, more critical situations require administering diphtheria antitoxin by IV, which is what Shonchita needed. About 48 hours after the treatment Shonchita returned home—breathing easy and feeling much better. 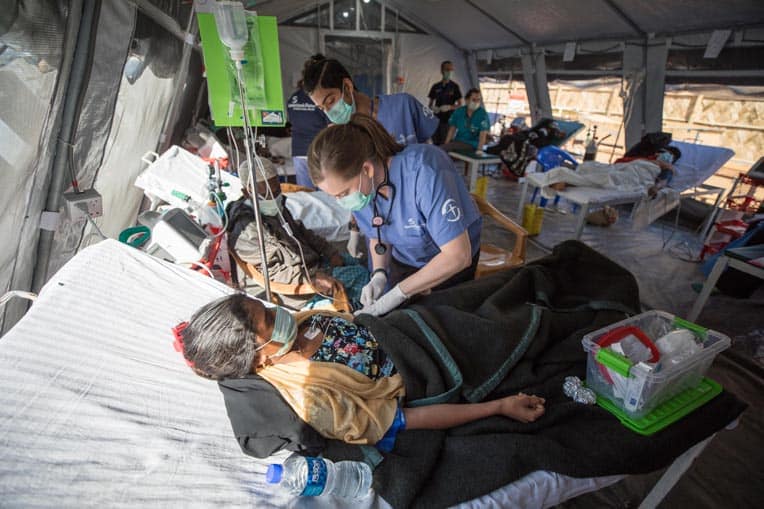 The center has been expanded to a capacity of 80 beds.

Kabir is grateful to Samaritan’s Purse for taking care of Shonchita because he didn’t know how to help his daughter.

“There are not a lot of options medically in the refugee camp, especially for diphtheria,” Dr. Tenpenny said. “If Samaritan’s Purse wasn’t here, the southern half of the camp would not receive care. Or, they would have to travel hours to the next nearest facility in the northern part of the camp.”

Since our center opened on Dec. 31, we have treated more than 700 patients and admitted more than 200 for diphtheria (as of Jan. 14). Current capacity stands at 80 beds. Every Rohingya patient at our center is cared for with love and Christian compassion.

“My heart is that we serve in the Name of Jesus Christ and share a hope that’s greater than any hope they’ve experienced before—the message of the Gospel,” Dr. Tenpenny said.

Kabir led a quiet life as a farmer before fleeing Myanmar four months ago. He had land and invested money in planting rice. The 50-year-old husband and father was able to provide for his family. 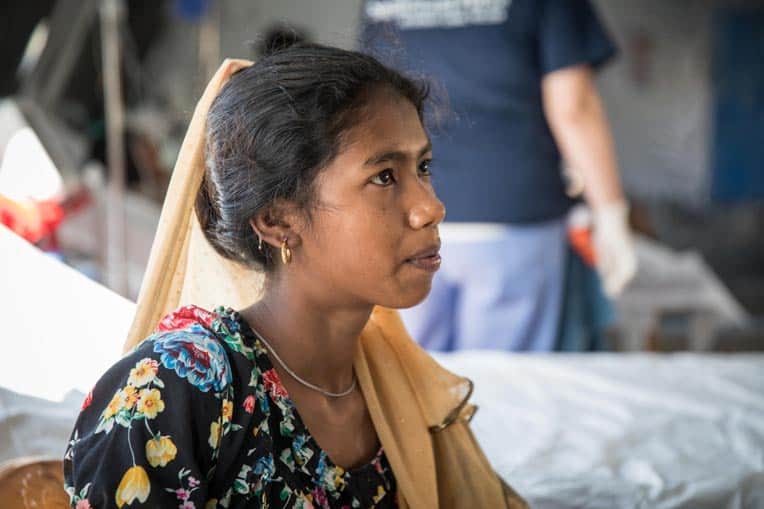 Everything is different in the refugee camp. Kabir does not have work because jobs are nearly impossible to secure. His makeshift bamboo house isn’t substantial enough to keep out the heavy rains and sometimes the family struggles to stay warm. Kabir has no land for farming in the camp and no money.

Kabir and his family, along with his brother’s family, walked for two days through the jungle to reach Kutupalong.

“We had to cross a lake and it was so deep the water was up to here,” he said, and pointed to his neck. “I was afraid.”

Kabir doesn’t know how long the family will live in the camp or if he’ll ever return home. For now, though, he is choosing to hope—especially since his daughter is healed of diphtheria.

“We are so thankful because we have our life.”

Shamshu worried more with every passing day. Her two children had been sick for several days and showed no signs of improving.

“They had a bad fever, coughing, and swelling,” she explained. “They complained that they were in pain.”

Shamshu’s 6-year-old daughter, Rogina, was treated at the Samaritan’s Purse diphtheria center with antibiotics. Her son’s condition was worse, and 8-year-old Ziau received the diphtheria antitoxin.

The children were smiling, laughing, and playing with balloons just one day after receiving medical care. 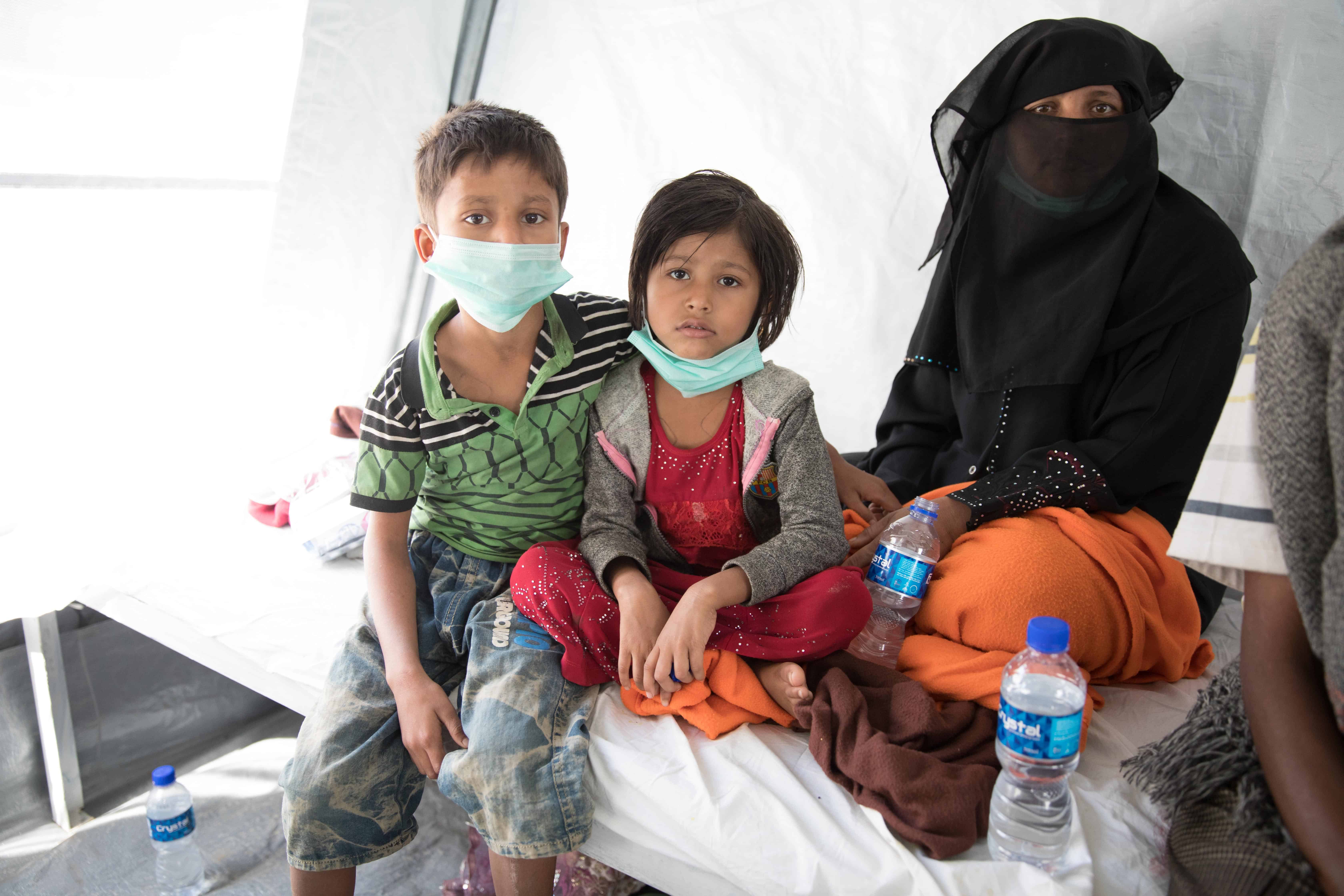 Shamshu (right) with Ziau (left) and Rogina (middle) at the Diphtheria Treatment Center.

Shamshu is glad her children came to the Samaritan’s Purse center because she doesn’t have access to any other medical care in Kutupalong. She cried when talking about her life in the refugee camp.

“When we came to the camp, people were living in the street without food. For nearly one month we did not have a permanent shelter—we lived on the street,” she said.

Shamshu’s brother-in-law, Shofiullah, is trying to help care for her and the children since her husband was killed about five years ago. Yet, Shofiullah cannot find a job in the camp and has a family of his own to take care of.

“We are only eating rice, but not enough. Life is horrific,” he said.

Please pray for the Rohingya refugees who are suffering. Pray for our medical team in Bangladesh as they care for patients in Jesus’ Name.