Samaritan's Purse team on the ground in St. Martin 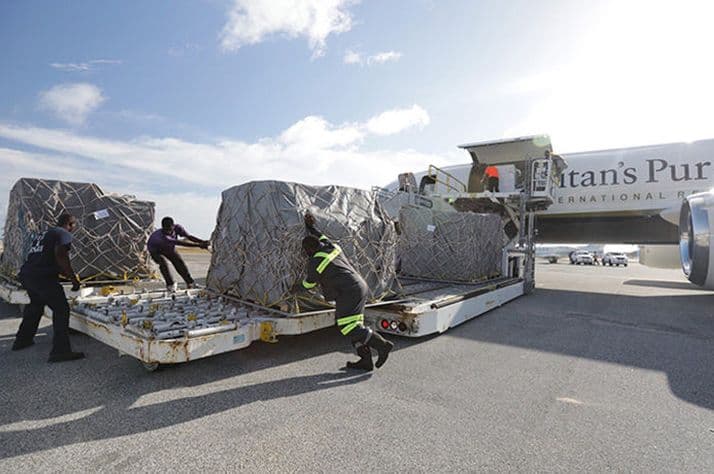 After Hurricane Irma left a trail of devastation across the islands, Samaritan's Purse is bringing relief in Jesus' Name

UPDATE: A second disaster assistance response team (DART) and more relief supplies arrived on the island of St. Martin on Monday. The emergency items included blankets, shelter plastic, hygiene kits, and water purification units—enough for 2,000 families. This increases our initial response to help a total of more than 4,000 families.

The island of St. Martin has extensive infrastructure and building damage; water and food supplies are dwindling. Additional emergency flights are planned in the days to come for additional hard-hits areas of the Caribbean.

Our DC-8 first delivered relief supplies and a DART to the island of St. Martin on Sept. 8. Distributions are now underway. Our team will continue working with government officials and church contacts to identify people who will most benefit. The team also assessed the French side of the island on Sunday to determine needs and how we can help. 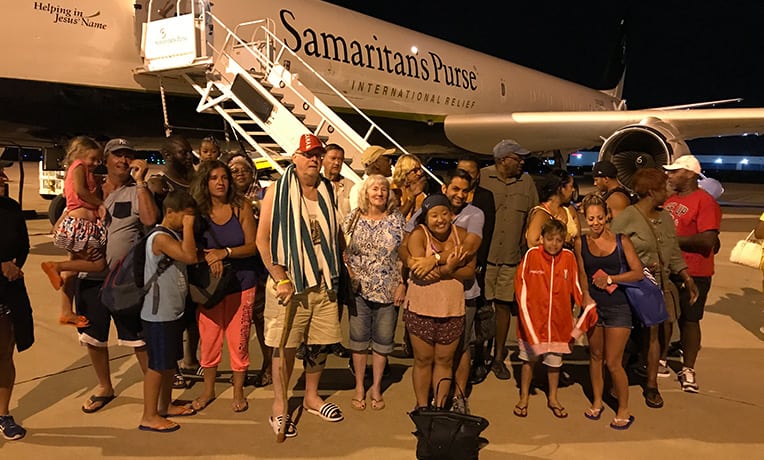 The Samaritan’s Purse DC-8 was a welcome sight to storm-weary Irma survivors stranded on St. Martin.

Thankfully, on Sept. 8, we were also able to bring back 29 people who had ridden out the storm.

Our St. Martin DART members report that when the DC-8 landed Friday it was greeted by a crowd of cheering people.

“This was a significant encouragement to the people, that somebody cared that much for them and was willing to go and help them in their time of need,” said our Hurricane Irma response manager. “We believe God has opened a unique door on St. Martin, and we want to show the compassion of Jesus Christ and bring His hope to people who are suffering.” 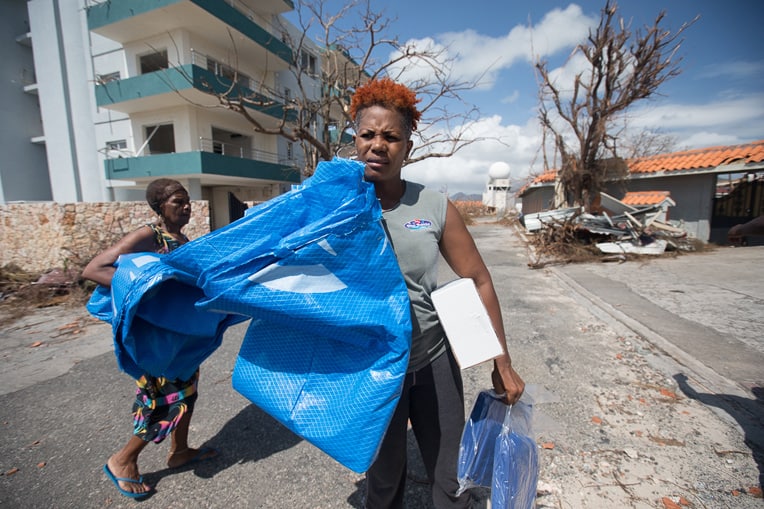 A small-scale distribution occurred on Sunday in St. Martin.

On Sept. 10 Irma hit South Florida as a ferocious Category 4 storm. The hardest hit areas were the Keys and Florida’s western coast, including areas in and around Marco Island, Naples, and Fort Myers. Flooding also occurred in Jacksonville; Savannah, Georgia; and Charleston, South Carolina. More than 10 deaths are reported due to Irma in the U.S. The storm has now been downgraded to a tropical depression.

Our DC-8 cargo jet was loaded with such essential items as hygiene kits, blankets, and rolls of heavy-duty plastic sheeting for emergency shelter.

Working with local authorities and a partnership network, our Disaster Assistance Response Team will distribute these urgently needed materials to more than 2,000 affected families. In future emergency flights, household water filtration units will be included.

“We’re taking critically needed supplies to storm survivors, enough to provide shelter and warmth for thousands of families,” said Samaritans Purse President Franklin Graham. “Please pray for all those affected by this horrific storm. These are difficult days, but we are more committed than ever to help the hurting in the Name of the Lord Jesus Christ.”

“We are more committed than ever to help the hurting in the Name of the Lord Jesus Christ.”—Franklin Graham

Now as the still dangerous Irma—a Category 4 hurricane—takes a turn and roars toward Florida, our U.S. Disaster Relief teams are prepared to jump into action. This weekend, Irma is headed right for South Florida, home to millions. We already have a convoy of disaster relief trucks and equipment ready to respond. 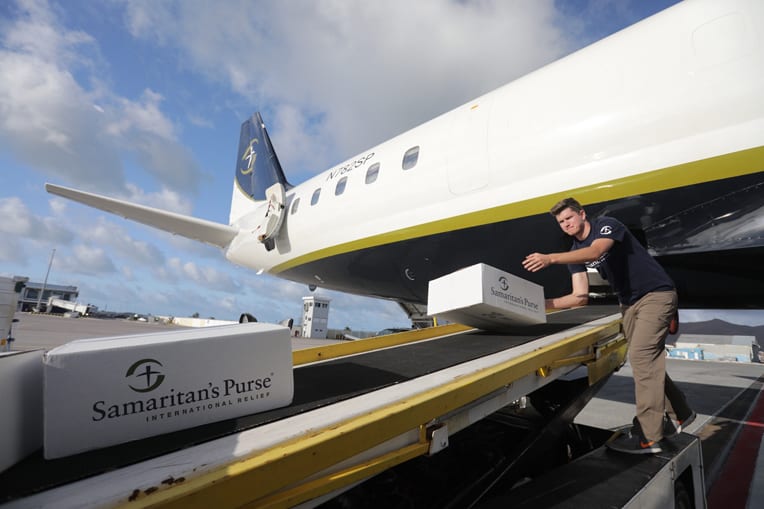 Our team unloaded relief supplies on Sept. 8 in St. Martin.

Irma, one of the most powerful Atlantic Ocean hurricanes in recorded history, initially made landfall as a Category 5 storm on Sept. 6. Its 185 mph-winds and punishing rains began carving up the Leeward Islands, including St. Martin.

More than a dozen deaths have been reported from the ferocious hurricane.

Massive destruction first came to Antigua and Barbuda. Nearly every building on the island was damaged and about 60 percent of the island’s 1,400 residents were left homeless. “What I saw was heart-wrenching, absolutely devastating,” Prime Minister Gaston Brown said.

Irma’s fury then punished the island of St. Martin, which is divided between French Saint-Martin and Dutch St. Martin. At least four people were killed and 50 injured. One official said that 95 percent of the island was destroyed. Another official reported that Irma “destroyed houses everywhere, torn-off roofs everywhere. It’s just unbelievable. It’s indescribable.”

Though Puerto Rico escaped a direct hit, Irma’s outer bands brought heavy winds and rain to the island, knocking out power to more than one million people.

The Turks and Caicos are being battered, and Bermuda, which was blasted by Hurricane Matthew last October, remains vulnerable to the wrath of Irma.

Though it has weakened some, Irma remains extremely dangerous. Its 155-mph winds, potentially catastrophic storm surge, and rains of up to 20 inches are expected to ram into South Florida—home to more than 5 million people—this weekend. Massive evacuations are taking place before Irma roars ashore. Miami Beach Mayor Philip Levine warned residents that a “nuclear hurricane” was on its way and urged them to leave.

Florida Governor Rick Scott has declared a state of emergency in all 67 counties. Governors in Georgia, South Carolina, North Carolina, and Virginia have taken similar steps in preparation.

As Samaritan’s Purse continues to minister to distressed families at five locations in Texas, we are readying our response in Florida and the Southeast.