Cleaning out flooded houses in Japan

When a pastor went to help clean a flooded house in Kure, Japan, he was overwhelmed not only by the scope of the devastation but also by the hostility of the man who lived there. The man wanted nothing to do with religion and didn’t even want the pastor spending time at his home.

Feeling a burden for the homeowner and his wife, the pastor didn’t give up. He persevered and prayed for God’s guidance. The Lord led him to the Christ Church Kure Volunteer Center, where he met Chris Kuriyama, a member of the disaster assistance response team that Samaritan’s Purse deployed to Japan after record-setting rainfall in July resulted in massive flooding and landslides.

Samaritan’s Purse is coming alongside local churches in Japan to mobilize and coordinate volunteers who are sharing the love of Jesus Christ while helping people clean up and move back home. We are also providing equipment, tools, and other materials to the disaster relief networks—like the one in Kure—so that volunteers can complete mud-outs and other clean-up projects. 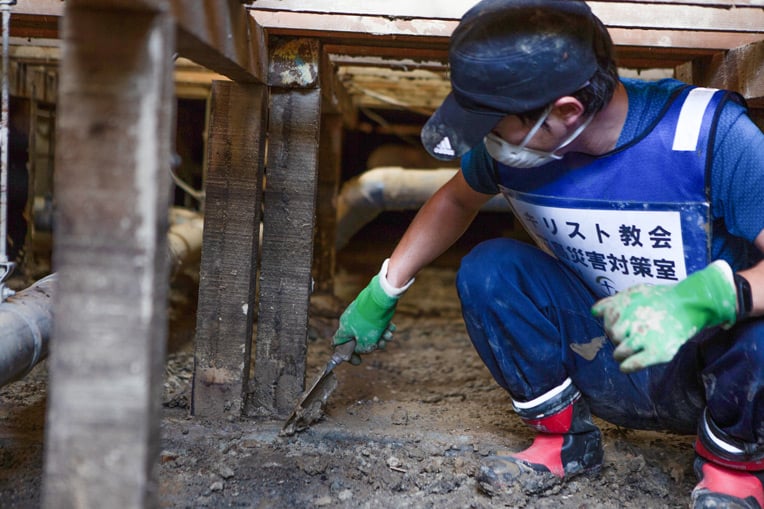 Volunteers are helping to clear mud from floor beams in a flood-stricken town in southern Japan.

The pastor and Chris talked about this couple and set a date for volunteers to help them. A team of 15 people traveled over 200 miles from Osaka to help, showed up at the appointed time, and prayed before they started working.

They shoveled out mud and sand and cleaned up debris, dramatically changing the scenery and improving the condition of the house. The residents were impressed.

As the volunteers served, they sang praise songs, and this touched the wife’s heart. She loves gospel music—like so many people in Japan do. Even though she is not a Christian, she recently started attending a church in Kure just to sing gospel songs. Not only was the wife affected by the work and music, so was her husband. His attitude toward Christians softened and he appreciated all that they were doing for them.

Volunteers continued to go their house twice a week to finish the work and demonstrate the love of Christ. And the pastor is praising God for what He is accomplishing in the life of this couple and dozens more like them.

About 400 Japanese volunteers have responded to this disaster and completed nearly 50 work orders in the Hiroshima and Okayama Prefectures (states), with many more jobs in progress. These include not only mud-outs of houses but also removing debris from streets, parking lots, gardens, yards and drainage ditches. They’re also tackling the cleanup of the Children’s Center in Okayama—a significant job.

Many of the church members helping out now cultivated a spirit of volunteerism back in 2011, when a 9.0-magnitude earthquake struck Japan and set off a massive tsunami and a nuclear disaster. 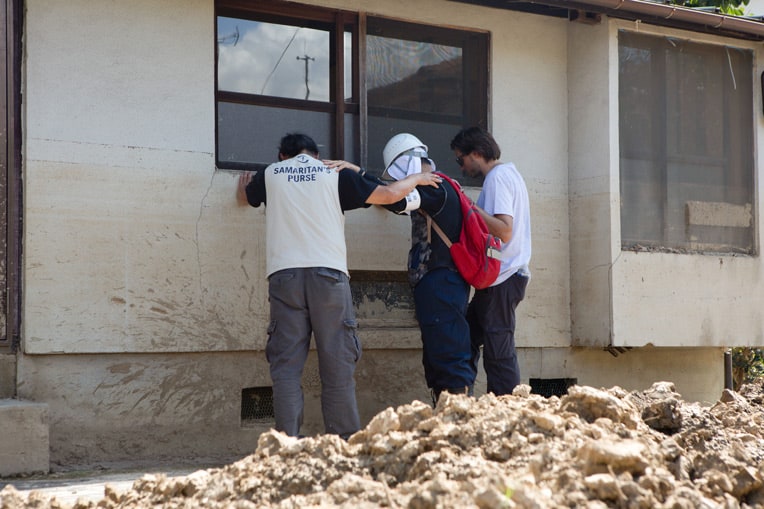 Members of our disaster response team pray with a worker helping clean up flooded homes in southern Japan.

Shortly after that triple disaster, Samaritan’s Purse sent 93 tons of relief supplies to Japan for displaced victims. Later, as bases were established, we hosted more than 7,500 volunteers who provided over 185,000 hours of work. A total of 460 mud-outs were completed and 509 homes were reconstructed. In addition, we provided various types of infrastructure support, including construction, reconstruction, and long-term rental assistance.

Up until that point, interdenominational church networks did not exist in Tohoku in the same way they do now. (Tohoku is the six-prefecture region of northeastern Japan intensely affected by the tsunami.) The growth of these networks can be attributed in a significant way to Samaritan’s Purse, which became a unifying and catalyzing agent among the region’s Christian community.

Matt Swenson, who is overseeing the work of Samaritan’s Purse in Japan, said that those pastors and Christian leaders involved in the response in Tohoku saw God move in powerful ways when they united in response and put faith into action. “That same spirit of service and love fills this response here,” he said. “I believe God will use the church and the volunteers to bless many and to be a light.”

Christians again united to work together following landslides in Hiroshima in 2014 and following a massive earthquake in Kumamoto in 2016.

That same spirit of unity and volunteerism is prevailing these days. Izumi Kuriyama, another one of our DART members, ran into Pastor Yamashita, who was serving in the hard-hit Mabi neighborhood.

“After March 2011, he came to Tohoku from Osaka to mud out homes eight to ten times,” Izumi said. “And he’s here now faithfully mudding out homes. Without love he can’t do that.”