Cleaning up after the 2011 disaster in Japan 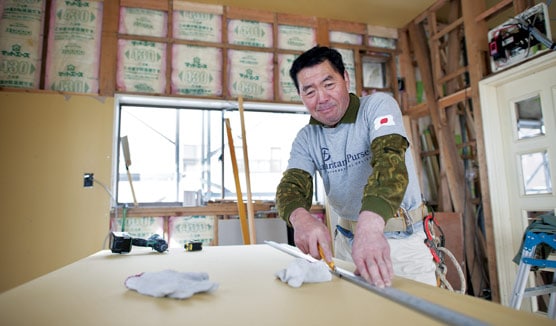 Thank you for helping Samaritan's Purse clean and rebuild homes in Japan following the devastating earthquake and tsunami.

June, 2012—On March 11, 2011 Japan experienced the most powerful earthquake in the island nation’s history.  Its magnitude measured 9.0 on the Richter scale and it created tsunami waves up to 40 meters high.

Just six minutes after the quake, the northern region of Tohoku was devastated. In the end, over 15,870 people were dead and 340,000 displaced.

Two years later, thanks to your generous donations and prayers, Samaritan’s Purse has distributed over 127,000 relief items to more than 18,000 households in addition to an initial 93 tons of supplies flown in by a 747 airplane.

It wasn’t long before the Samaritan’s Purse warehouse became a hub for churches and volunteers to get information and resources in order to help their suffering neighbors. Over 90 ministry partners assisted with distributing relief items across the disaster zone, and over 500 homes have been rebuilt—thanks in large part to two energetic Canadian field staff, Chris and Izumi Kuriyama.

They are still in Japan, leading our efforts in church engagement and church reconstruction—the fruits of which have been abundant. About a dozen churches have been rebuilt since last fall, and in 2012, 150 churches banded together to collect gift-filled Operation Christmas Child shoe boxes for the first time. Children in the Philippines received the 3,800 boxes they packed.

The future is looking brighter for Japan, especially as more hearts turn to God.

“I believe that God has a passion for the salvation of the Japanese people,” said Izumi, who has seen many Japanese give their lives to Christ.

Since March 2011, Samaritan’s Purse has worked through partner churches to clean and rebuild more than 500 homes. Thanks to generous donations by Canadians, we have also provided survivors with hygiene kits, gas stoves, blankets, heavy-duty plastic, and bicycles, plus emergency food, winter clothing, and more. Read our Japan Final Report here. 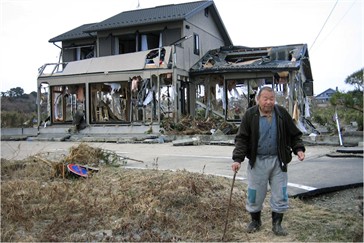 Impressions of Japan from Peter Fuller, who volunteered with Samaritan’s Purse in Japan after the earthquake and tsunami of March 2011.

The first thing that strikes you as you drive through the Watanoha district of Ishinomaki is the scope of the devastation; it takes your breath away. This was a medium-sized harbor city north of Sendai, where entire city blocks are simply gone, either washed away by the tsunami of March 11, 2011, or razed because the buildings were no longer tenable.

Driving along the highway past the Ishinomaki harbor, mountains of debris stretch for as far as the eye can see, dwarfing the massive heavy equipment that attempts to pile them ever higher, for more debris is added every day. The tsunami created more trash than all the garbage produced by Japan in the last 25 years.

Along with the debris, thousands of cars, damaged beyond repair, line both sides of the highway and along the sea wall. Stacked one upon another, they appear to be an attempt to create a rampart out of the destruction caused by the first tsunami, in order to counter any future incursions by the angry sea.

Back in Watanoha, a closer look at the destruction reveals a very personal side. Houses that once reflected the esthetic flair of the Japanese people now stand wounded and scarred. Walls that once reverberated with the laughter of children playing in the streets, or listened to the conversation of neighbors across a garden wall, now stand silent, if they still stand at all.

Many have been torn down, either because they could not be restored, or because their occupants no longer draw breath, and all that remains is an empty lot, sprinkled with lime. Many show the signs of the high water line, a brownish mark which observers peer at in awe, wondering how so much water could intrude so far inland, to wreak so much havoc.

And as you stand in the midst of all this, you gain a glimpse into the heart of God and for a fleeting moment, you understand what He must feel as He looks down on the hurt and pain caused by this tsunami.

Hopelessness hangs like a pall over the landscape, as thousands have no means to rebuild their lives. Many face a bleak future, either because the chief wage-earner of the family didn’t survive or because their workplace no longer exists. Some feel the government has let them down; others simply have no desire to return to their homes, the site of such horrific memories.

In spite of this, the world has moved on. Television networks no longer report on the plight of the Japanese people; the mainstream media is on to the next sound-byte. For the most part, the victims of the March 11 tsunami are forgotten.

But for some there is hope. Numerous organizations, such as Samaritan’s Purse, have stepped in to assist in this vast wasteland of so much need. Volunteers clean up affected communities, removing debris from homes, cleaning and then re-building them from the sub-floor up to the high water mark.

Even before the re-construction began, Samaritan’s Purse was providing disaster relief for thousands of tsunami victims. When the clean up began, carpenters were enlisted to give back to the Japanese people what the tsunami had taken from them, and more. Not just their homes, but their dignity and their hope. And hope in the form of the love of Jesus Christ, the kind of love that gives itself freely and sacrificially to those in need.

I went to Japan because I felt compelled by God to do so, to share the love of Jesus Christ with those whom I had never met, but who represented so great a need. The way I see it, after the horror they’ve endured, and continue to endure, these people deserve no less than the very best that I can offer them.