UPDATE: More than 800 miles north of where Samaritan’s Purse has been serving victims of Cyclone Idai, another powerful storm—Cyclone Kenneth—made landfall on April 25, killing more than 35 people and displacing 20,000 others. It was one of the strongest storms to ever hit Africa. Our DC-8 aircraft landed Nacala, Mozambique, on May 4 with tons of emergency shelter materials, including 4,500 tarps funded by Samaritan’s Purse Canada, for victims of this latest storm.

Cyclone Idai hit the port city of Beira, Mozambique, with 160 km/h winds on March 14, destroying buildings and dumping torrential rains that flooded an area nearly 2,000 square kms wide. About 200,000 homes have been damaged or destroyed. The storm also devastated farmers in the midst of harvest season, harming up to 1 million acres of crops and threatening food supplies. The local Ministry of Health has declared a cholera outbreak as thousands of cases are developing. More than 800 lost their lives in the storm and 500,000 were displaced.

On April 25 Mozambique was hit again by Cyclone Kenneth, another fierce storm packing 280 km/h winds. Kenneth brought storm surges up to five meters high in some areas, but made landfall far from the region impacted by Cyclone Idai. At this point, recovery efforts for Cyclone Idai have been unhindered by this second storm. 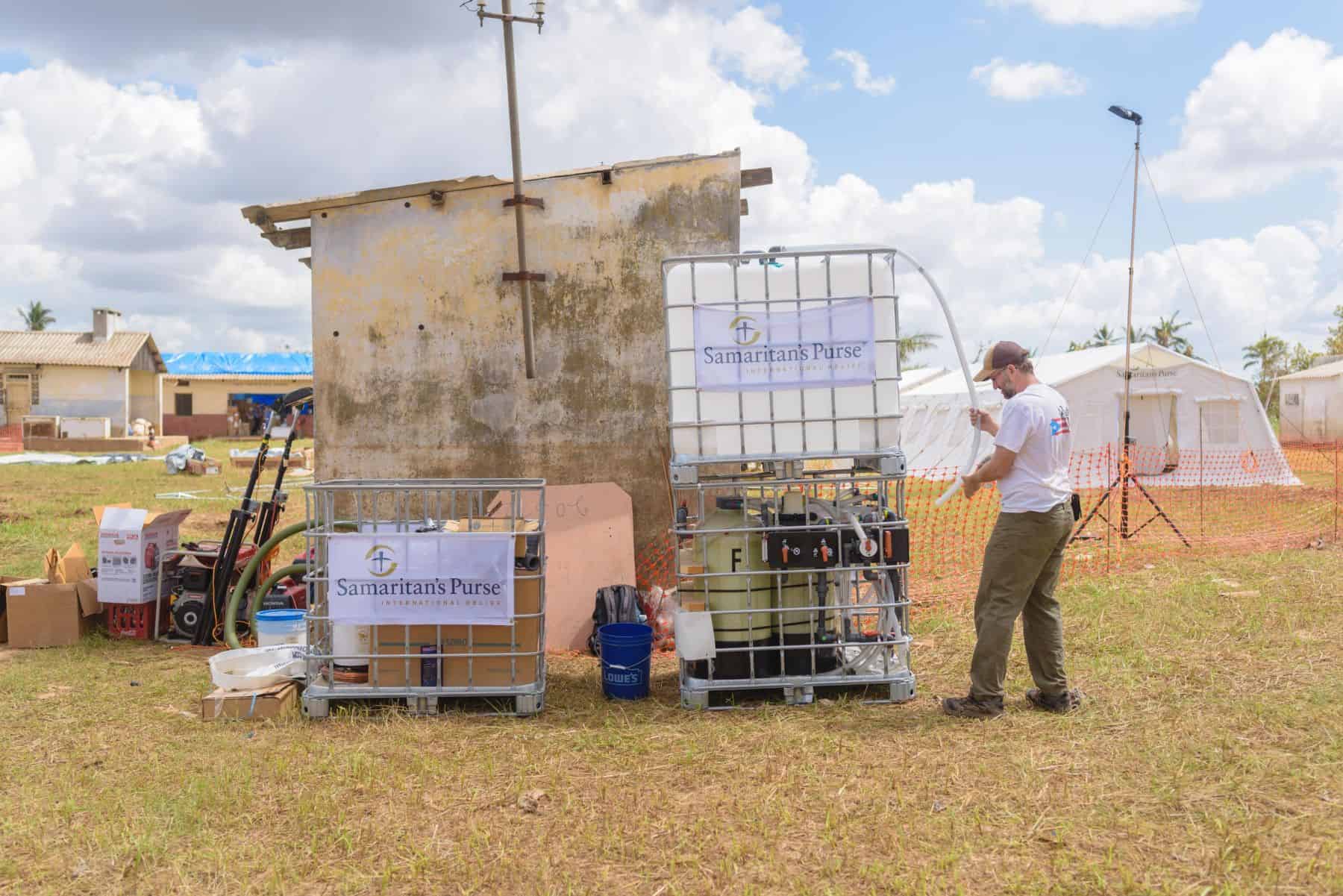 Canadian, Peter Roebuck, sets up a water treatment system in Mozambique. Peter is from Ottawa and is serving as the WASH (Water, Sanitation & Hygiene) lead for the team. The Emergency Field Hospital can be seen in the background.

Samaritan’s Purse DC-8 aircraft has made three trips from Greensboro, North Carolina, to Mozambique carrying a total of over 70 tons of supplies for cyclone relief. This included shelter materials, blankets, solar lights, an Emergency Field Hospital, and equipment to produce clean water. Our Africa-based DC-3 aircraft also participated in the response and has moved more than 40 tons of supplies to difficult-to-access areas. A total of 97 DART personnel – including seven Canadians – were deployed as part of the Mozambique response.


An international team of disaster response specialists spent more than six weeks in the area ministering to victims of the storm. Samaritan’s Purse handed over its Emergency Field Hospital in Buzi to the Mozambique Ministry of Health after seeing over 5,000 patients and delivering more than 55 babies together with our mobile medical clinics. Our water, sanitation, and hygiene teams pumped contaminated water out of wells to fight the threat of cholera. We also distributed three-day rations of rice, beans, and oil to vulnerable families and gave out more than 380 tons of food. In addition, we facilitated a two-day training for more than 2,400 pastors in the region, giving them much-needed Bibles as well.

“We trust God.
We will start again.”—Lydia

Lydia, her husband, and their two children aged 7 and 23 months lost their roof to Cyclone Idai. They were among the first families to receive heavy-duty shelter plastic from Samaritan’s Purse.

“We trust God. We will start again,” Lydia said. “All things are broken, but we will start fixing them.” 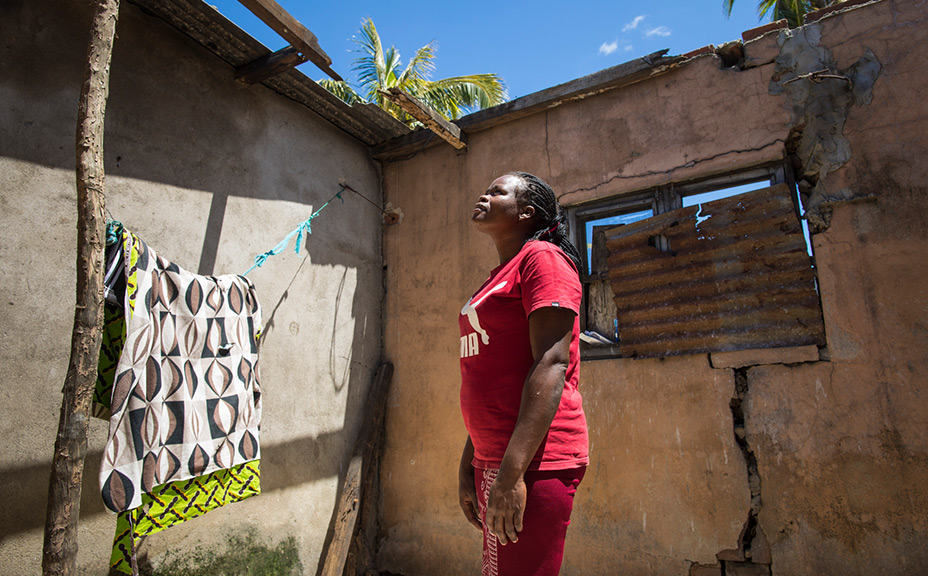 Lydia looks up to where her roof used to be, but is thankful to God for helping her start again.

Maria also received a tarp from our international disaster relief team after losing her roof to the storm. “I am so thankful for Samaritan’s Purse coming here to help,” she said. “We pray the Lord will help you with all that you are doing from Mozambique and Beira.”

Working together with local churches, Samaritan’s Purse distributed more than 16,000 tarps, 4,600 blankets, 2,100 buckets, 2,300 solar lights, and 3,800 hygiene kits. In addition, our teams handed out over 3,200 water filtration systems and rehabilitated 250 water supply points.
Please pray for the people of Mozambique as they recover from this tragedy and for Samaritan’s Purse teams as we serve them in Jesus’ Name. 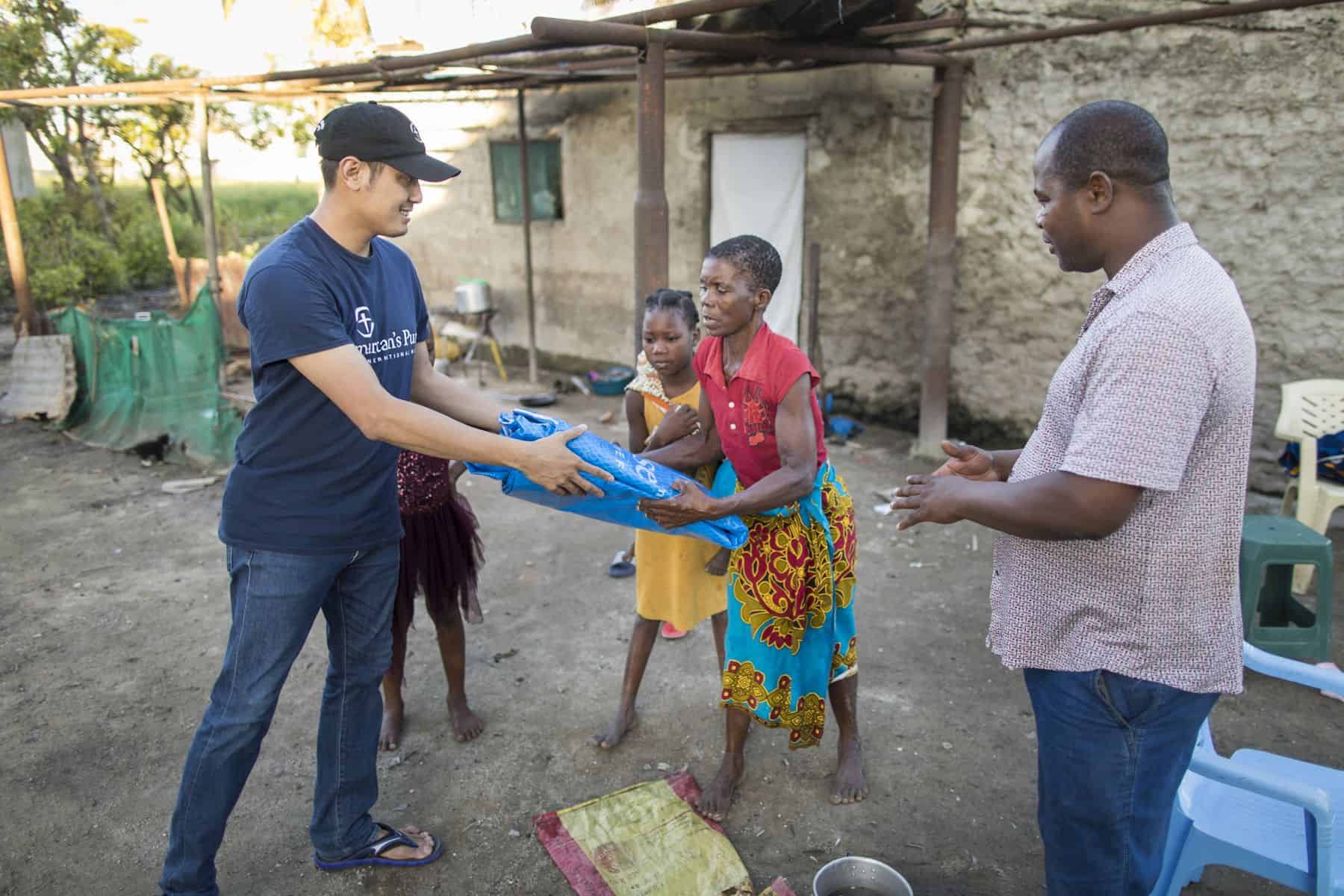 Maria receives tarpaulin from Samaritan’s Purse after losing her roof to Cyclone Idai.