Widow sets up successful business with help from Samaritan's Purse 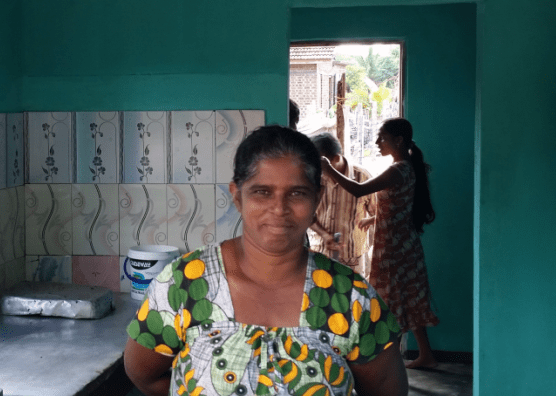 A widow in Sri Lanka receives counseling for post-traumatic stress disorder, starts a successful small business, and puts her trust in Christ.

March, 2016—Sivanesarasa is from a war-torn district in Sri Lanka. She and her family were forced out of their hometown in 2009 during the country’s brutal civil war. While seeking refuge from the violence, they ran for cover at a temple—but in the process her husband was killed by an exploding shell.

Sivanesarasa and her four children called a camp for internally displaced people home for the next five months. As a result of the trauma they experienced, she and her eldest daughter suffered from post-traumatic stress disorder (PTSD). But thanks to God and the donations of generous Canadians, Samaritan’s Purse was there to help turn things around for this desperate family.

After receiving counseling, Sivanesarasa and her daughter successfully recovered from PTSD. Their family of five accepted Christ and now fellowship and serve at a local church.

With training and resources from Samaritan’s Purse, Sivanesarasa chose to open a poultry and vegetable shop. Today, two of her daughters help with the business—and it is booming. Sivanesarasa has been able to save money and also successfully apply for a business expansion loan. She used the funds to build a permanent store out of which she can sell her produce and chickens.

Grateful to Samaritan’s Purse and its donors for the way her life has changed, Sivanesarasa said, “Because of this help, I now have a decent livelihood and I can support my children. My daughters can continue their higher education.”

Sivanesarasa is just one example of how God’s love, grace, and power can miraculously transform a life. Since 2012, Samaritan’s Purse has been working with some of the nearly 90,000 widows who are estimated to live in northern Sri Lanka. Like Sivanesarasa, most of their husbands were killed during the country’s civil war that lasted from 1983 until 2009.

You can help widows and other vulnerable women like Sivanesarasa. Please join with us to empower women around the world.

“Religion that God our Father accepts as pure and faultless is this: to look after orphans and widows in their distress and to keep oneself from being polluted by the world” (James 1:27, NIV).