A village in Nepal is experiencing a dramatic transformation, thanks to Canadian donations enabling us to drill a water well, install filters, install special fuel-generating latrines, and agricultural training.

October, 2016—Water wells running dry was one of the unpublicized byproducts of Nepal’s 7.8-magnitude earthquake in April 2015.

Geological shifts blocked some old underground waterways, while opening some new underground waterways. In one remote village in the flatlands of eastern Nepal, the dry well spelled disaster. Local residents lost a water source on which they’d been dependent for more than 30 years.

Fortunately, Samaritan’s Purse responded by working through our partner organization in Nepal to drill a new well. Donors to Samaritan’s Purse had already ensured that each household in the village has a life-saving BioSand Water Filter, plus related health and hygiene training.

“If you had not built our new well and provided the water filters, many people would have died,” says community leader Pan Maya Tamang.

The World Health Organization reports that someone in the developing world is dying every 37 seconds from diarrheal diseases caused by drinking dirty water plus poor sanitation and hygiene. Samaritan’s Purse has responded by building and installing BioSand Water Filters in Nepal and several other countries. The invented-in-Canada filters transform dirty water into drinkable water in seconds.

In Tamang’s village, BioSand filters have significantly reduced diarrheal diseases in the 2 ½ years since the filters arrived and given  the villagers  longer lives, he says. 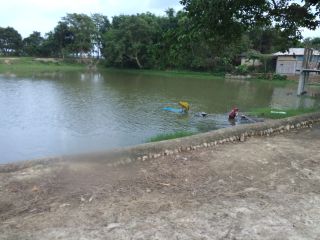 About 842,000 people  die each year from diarrheal diseases caused by dirty water and poor sanitation and hygiene, from sources such as this.

“When you go home,” Tamang recently told several visitors to his village, “please thank them (supporters of Samaritan’s Purse Water Projects). Tell them we’re very happy. But please also tell them that many other villages and people are suffering (from diarrheal diseases) and need Canada’s help.”

Through our local partner, Samaritan’s Purse has shared (with the Nepalese government) the cost of building latrines for half of the village’s 64 households so far, with the rest to be built later this year. The special latrines capture human waste, mix it with farm animal waste and transform it into methane gas.

Each household has a small gas storage tank. Turning on the tank’s tap provides residents with a convenient energy source for cooking that’s dramatically reduced the amount of firewood needed each day. Cutting and burning the wood was bad for the environment. It also consumed a lot of the villagers’ time each day, and placed them at risk of deadly snake bites while searching for wood.

Other benefits to the village that have flowed from Samaritan’s Purse donors include agricultural and animal husbandry training that has enabled villagers to increase their household income through better crop yields and extra money from goat herding. Increased income means decreased likelihood of villagers being so desperate for jobs that they risk being lured into human trafficking ventures.