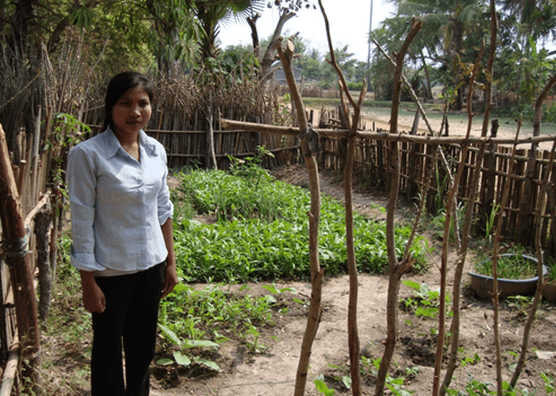 Educated and equipped to grow her own vegetable garden, a mom in Cambodia says, "My family’s health has improved because now we have enough nutrition in our food."

“We were poor because we had so many sicknesses,” says Neang Rady, recalling how often she had to buy expensive medication for her family.

Like most of Cambodia’s rural population, Neang had never learned about hygiene, nutrition, or proper sanitation practices. She didn’t realize that bacteria made her family’s food and water unsafe, plaguing them with disease.

“We had diarrhea, salmonella, worms, and fever,” she said. “Malnutrition was also a major problem, because we didn’t have enough vegetables to eat.”

Neang learned about the importance of a balanced diet and proper food preparation when Samaritan’s Purse came to her village offering health training workshops.

“I understood their lessons on disease prevention, clean water, hygiene, sanitation, and agriculture,” she said.

In addition, Samaritan’s Purse staff used gifts from Canadians like you to set up a vegetable garden beside her home and taught her how to maintain it. Neang applied her agricultural training to produce large quantities of nutritious, chemical-free vegetables.

“I plant vegetables year-round,” she said. “My family’s health has improved because now we have enough nutrition in our food.”

The garden has also become a source of income for Neang, as she sells the excess produce to other villagers at the market.

“We are now living with happiness, doing what the program trained us to do,” she said.