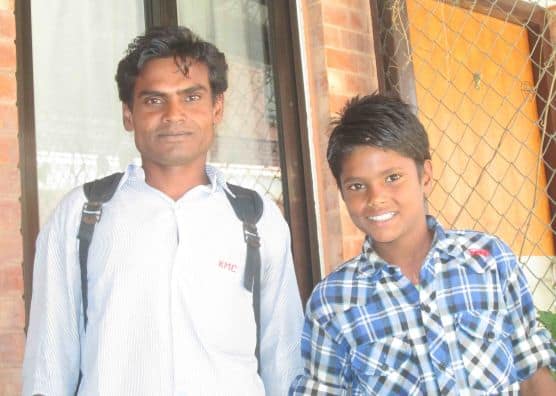 Santosh, 12 (pictured above right), was born with rheumatic heart disease that prevented him from enjoying the things other kids his age enjoyed. He was referred to Kathmandu for advanced treatment, but his father (left) couldn’t afford the trip, let alone the medical bills. But through the Patient Navigation ministry of  Samaritan’s Purse, Santosh was finally able to undergo surgery in Kathmandu to replace his mitral valve. Now Santosh is able to play soccer with his friends!

Hope and Healing through Patient Navigation

A Nepalese man’s tragic fall from a tree left him paralyzed from the waist down, but it was the catalyst for an organization that’s helped thousands of disabled people in the Himalayan nation.

Babu Kaji Adhikari was a married 23-year-old in 1984, only a month away from the birth of his first child, when he tumbled from a tall tree in rural Nepal while cutting leaves and branches to feed farm animals.

In a predominantly Hindu culture that believes disabilities are punishment for past sins, Babu Kaji’s paralysis prompted disdain rather than sympathy. Even his own family distanced themselves from him. Babu Kaji and his wife Goma quickly became so impoverished that their son Bikash was born in a cattle barn.

Soon afterward, while caring for her paralyzed husband and their new baby, Goma was desperate for cash and found a job with the same local Christian mission hospital that was caring for Babu Kaji. She began tending the garden, cooking for former leprosy patients, and helping to prepare dead bodies in the mortuary. 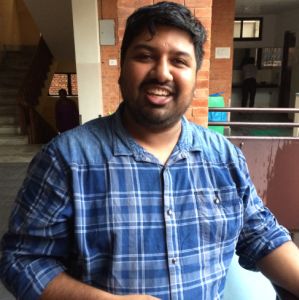 Bikash Adhikari, Sundar Dhoka Saathi Sewa director, is pleased that more than 1,000 of Nepal’s children and their families have benefited from the “patient navigation” system.

Through the hospital’s loving and inspiring missionaries, Babu Kaji and Goma underwent a transformation. They began to live with new purpose and vision.

One of the first changes was their move to Kathmandu-prompted by the sad fact that much of rural Nepal is far from wheelchair-friendly. The couple began to meet other people in Kathmandu with disabilities, and invited many of them to their home to socialize.

During the next few years, this group evolved into an organization called Sundar Dhoka that specialized in reaching out in God’s love and acceptance to Kathmandu’s disabled.

Through the donations of Canadians, Bikash says, more than 1,000 of Nepal’s children and their families have benefited so far.

Meanwhile, when members of the congregation or of their families became sick, Goma would help them navigate Kathmandu’s medical system. Because many members were from rural Nepal, they didn’t know how to arrange a hospital visit, pay for treatment, or arrange follow-up care. Some also didn’t speak the Nepalese dialects medical staff typically use, or know what medical services were free.

“She (Goma) is the one who started advocating on behalf of disabled patients at hospitals,” says Bikash Adhikari, Babu Kaji’s and Goma’s now-grown son.

Patient navigation also includes housing and feeding out-of-town patients and their care-givers during and after their medical treatment. In many cases, Bikash says this follow-up care includes physiotherapy. In other cases, it includes counseling to help people see their disability or their loved one’s disability in a positive light.

SDSS provides patient navigation to people of all ages. Samaritan’s Purse Canada helps to fund these services and surgeries for children with disabilities and/or heart problems. Through the donations of Canadians, Bikash says, more than 1,000 of Nepal’s children and their families have benefited so far.

Babu Kaji and Goma continue to play vital roles at Sundar Dhoka. Meanwhile, Bikash and his wife Bijata take delight in how God used the tragedy of Babu Kaji’s fall from a tree to point him and Goma towards a mission hospital that would give their lives new meaning and make them champions for Nepal’s disabled.

“The seeds of this amazing work were planted at the time,” Bikash says with a smile.