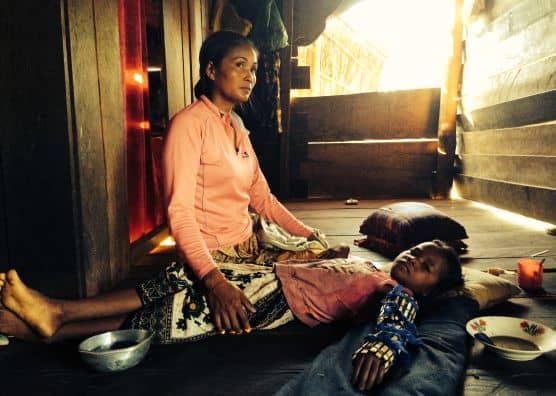 Jason Martens, Program Development Advisor for Asia, requests prayer for a girl named Nga in Cambodia. Despite Nga’s broken arm, her family is resisting taking her to a medical facility, relying instead on traditional methods that could harm Nga’s health.

May, 2014—I visited Tabong Kla today, a small community about 30 km south of Stung Treng, northern Cambodia. I was being shown a water-well by staff from our local partner organization. We didn’t expect to meet Nga, a 13-year-old girl who fell from a tree earlier that day and broke her arm in two places.

The break was so severe, her mother Maap told us, that the bone was pushing on the skin while her arm was dangling out of place. We could tell by Nga’s moans and tears that she was in a lot of pain.

What made this   particularly sad was that Maap had chosen to take Nga to the local healer, who bandaged  her with a makeshift cast and gave her traditional medicines.

This option—as opposed to bringing Nga to a local clinic—was chosen not due to lack of access to medical care or a lack of money. It was a choice based on spiritual beliefs. The family  believes in the power of the spirit within the traditional healer and medicines.

When we offered to cover the entire expense of getting Nga to the hospital in Stung Treng for treatment and a fitted cast, we were strongly opposed by Nga’s uncle. He was adamant that it was foolish to bring her to the hospital. It was one of those moments where you recognize the work and presence of the evil one.

Would you pray for Nga, Maap, the uncle and this community?  We left our phone number and told Maap that if she changed her mind, we would drive back out in the truck and transport Nga to the hospital. Let’s pray there will be a change of heart and our local staff will have a chance to be a witness to the power, grace, and freedom of Jesus Christ.