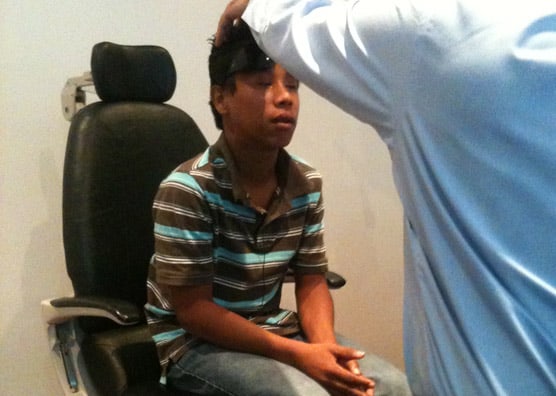 April, 2013—A Samaritan’s Purse team from Lloydminster, AB met 13-year-old Harry during a mission trip to Costa Rica. He came to one of their eyeglass clinics, but with both eyes severely crossed, no pair of spectacles could correct his sight.

Filled with compassion, the team left Costa Rica determined to help Harry one way or another. His condition had left him vulnerable to exploitation by local drug lords and bullying at school; without surgery, there was little hope for his future.

That was  more than  two years ago. Today, Harry has perfect 20/20 vision thanks to the team banding together and raising more than $2,000 for an eye operation that has restored Harry’s vision. The surgery happened last December in San Jose, Costa Rica’s capital city.

“I feel better and I think I look better,” said Harry. “God is great and I’m happy.”

“Ask and you shall be given”

Harry’s mother testified to God’s faithfulness throughout the time leading up to the surgery, sharing stories about His miraculous provision of food, shelter, money and a great surgeon—the best in the country. Even a Nintendo Wii was unexpectedly provided so her active, soccer-loving teenager could have a hobby while recovering indoors.

“The Bible says, ‘Ask and it will be given to you,’ and this was something I’ve been asking God for a long time,” she said about Harry’s surgery. “As a mom, I’m so grateful. I feel so happy for him.”

Harry’s future is now looking a whole lot brighter. In the short-term, Harry says, “My classmates will stop making fun of me and calling me names. I’m so happy! I feel confident.”

His mother sees hope even further down the road: “His life will change completely! I think in the future he could even get a better job as a result of it.”

Whatever happens, each time Harry looks in the mirror, he will be reminded of the faith that was put into action by a church group from Canada.

The Bible says, “What good is it, dear brothers and sisters, if you say you have faith but don’t show it by your actions?” (James 2:14a, NLT). Costa Rica was not too far and $2,000 was not too much for this humble mission team.

Faith plus action equals miracles! How might you put your faith into action today?