Doctor and Family Follow Christ's Call to Serve in Kenya 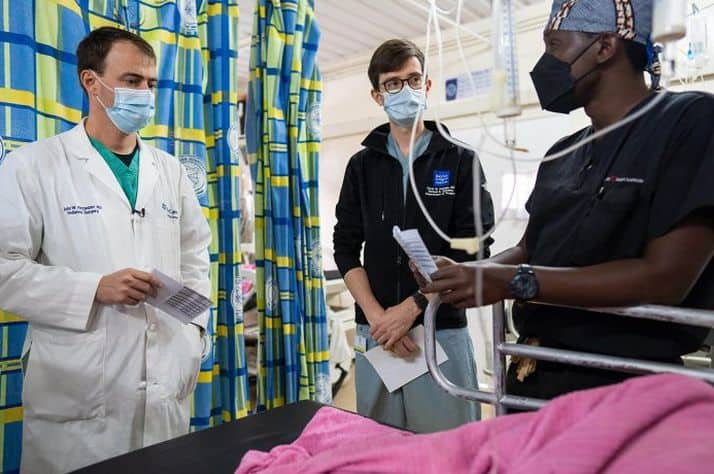 Pediatric surgeon Dr. John Fitzwater, traveling alongside his wife and children, serves as a short-term volunteer at Tenwek Hospital through World Medical Mission.


The young boy was dying. Confined to his hospital bed fighting a battle with terminal illness, there was nothing that could be done to save him. As pediatric surgeon Dr. John Fitzwater pulled his chart during rounds one night, each line was like a gut punch, hard to read and even harder to accept. As reality set in, all he could do was pray over the boy and his family. 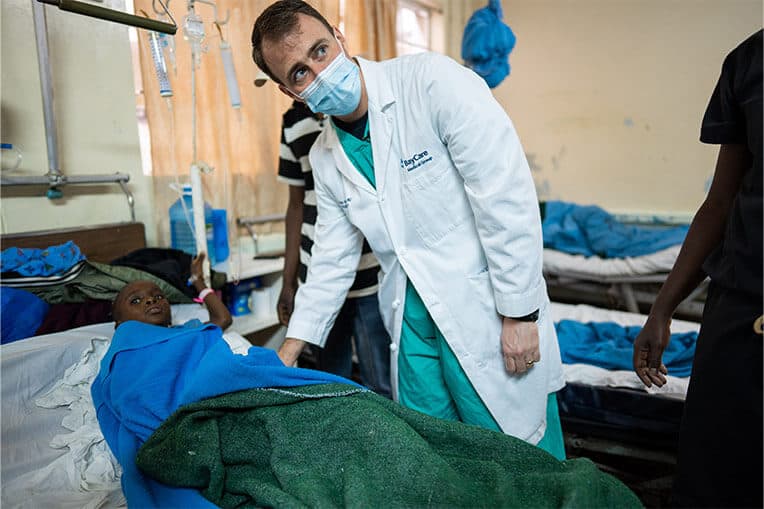 The next morning, Dr. Fitzwater opened the chart again, finding a note inside that had been missing the night before. It was from a hospital chaplain who said the boy had prayed with him to receive Jesus Christ as his Lord and Savior after Dr. Fitzwater’s visit the previous night. Joy filled Dr. Fitzwater’s heart, knowing that regardless of this boy’s physical ailments, he will have eternal life.

“I looked at him and said, ‘You’re now my brother,’” John recalls, tears forming in his eyes. “The smile on his face told me that he had genuinely followed Christ, and that’s why we do what we do. We don’t necessarily do it for the medicine, we do it to see people become members of the Kingdom and followers of Christ.”

That young boy was just one of the many patients John has seen in his 17 years of short-term trips with World Medical Mission. 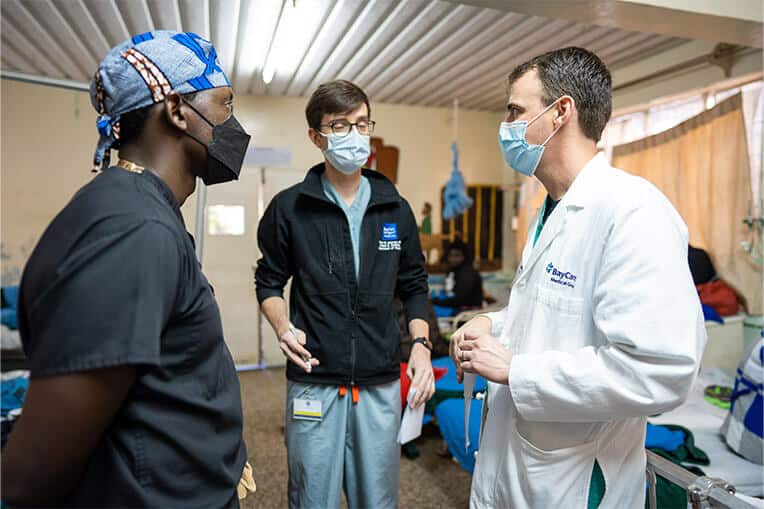 His passion for ministering overseas—going to short-staffed hospitals with limited equipment —was actually sparked by an evangelistic choir trip he took in high school to Kenya’s capital, Nairobi.

“God put a seed in my heart on that trip that refused to fade,” John said. “Throughout college I kept thinking I want to go back to East Africa and Kenya just had a draw, and when we came back in 2005, it just cemented our love for these people and for this hospital.”

John and his wife, Krista, call that first trip to Tenwek Hospital in 2005 their “first step of obedience.” Now, years later, John returns often to the hospital through World Medical Mission to fulfill one of God’s callings on his life.

While at Tenwek, his days are filled by walking from bed to bed in the pediatric ward, checking on boys and girls struggling with illness. He also performs a wide-ranging spectrum of urgently needed operations, from neonatal surgery on children who weight just one pound to surgeries on fully grown 18-year-olds. 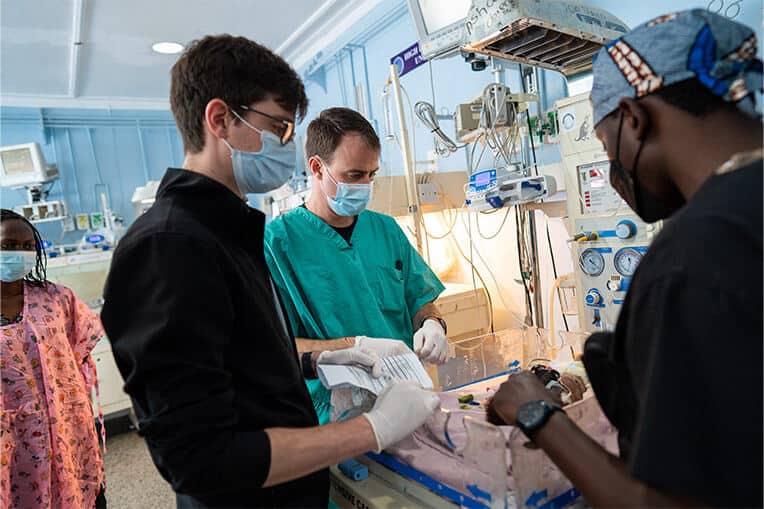 Dr. Fitzwater and colleagues attend to a patient in the Newborn Intensive Care Unit (NICU).

“The flexibility that you need here to work has really made me a better surgeon,” John said.

Medical options are limited in the small, rural town of Bomet, where Tenwek Hospital is located. There’s no doubt John’s expertise helps save lives. But, as a Christian physician serving with World Medical Mission, he is treating more than patients’ physical wounds. He’s providing spiritual care to their hearts as well.

“I think it’s really important for anybody that does overseas work to have a why,” John said. “We as Christians have a profound why, which is that Jesus Christ died for our sins, and therefore we are called and compelled and desire to show His love and His glory to others through our service.”

Although it was just John and his wife, Krista, on their first short-term trip to Tenwek in 2005, their family has expanded to take up several more seats when they board the airplane to head overseas. They now have five daughters, ages 3 to 15, who make the trip with them each time they go. 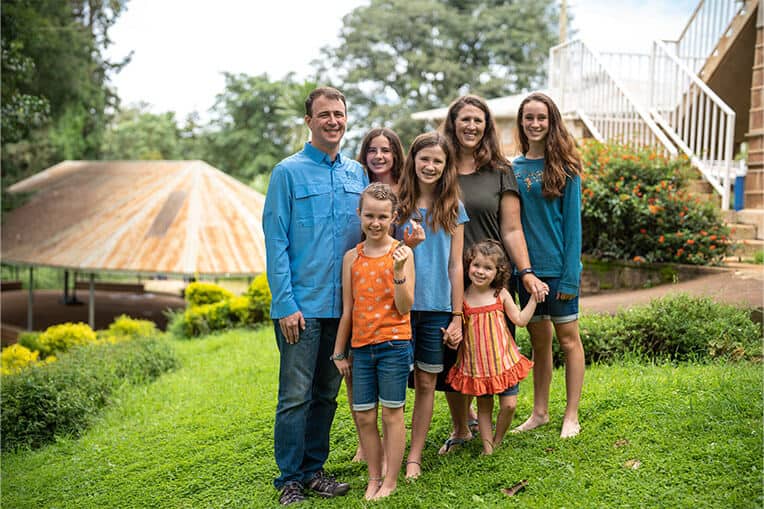 Dr. Fitzwater (left) and his family enjoy serving together at Tenwek Hospital.

While their dad is scrubbing up to perform surgery or begin patient rounds, the girls start their day with homeschooling. Often they also enjoy chai tea alongside hospital helpers with whom they’ve developed a relationship over their many visits. In the afternoons, they may go for a walk before the evening rain starts or serve in different ways near the hospital. Alongside their mom, they might help with mud-house construction or visit an orphanage or train women to sew.

AnneMarie, 15, went on her first trip to Tenwek at just 17 months old. For her, Kenya has become a second home, a place where she can escape from the hustle and bustle of life in the United States and find rest while spending time with her family and Kenyan friends she has made over the years.

“I love it here,” AnneMarie says. “We have had several moves so Kenya is the one consistent place we have had for so long. It’s really nice coming back to this one place where I know and love so many people here, and I can serve the community here.”

The girls spend lots of time on the grounds of the guesthouse, reading books, playing with other children, and looking for new insects and reptiles that they can’t find back home in the United States. Chameleons are always a favorite discovery. They’ll name them and proudly place them on their shoulders for all to see.

“They’re happier here,” Krista said of her daughters with a full smile on her face. “They’re playing all the time. We always say before we go back to the states we scrub their feet because they have what we call ‘Tenwek toes.’ Their feet are brown from running around barefoot all the time, having fun outside in the rain and the mud. It’s the way kids are supposed to have fun.”

While there are certainly challenges to bringing five children overseas for weeks or months at a time, the Fitzwaters have learned to embrace them instead of trying to avoid them. John and Krista trust their time together in Kenya will benefit their girls for years to come as they see their parents obeying the calling God has placed on their lives. 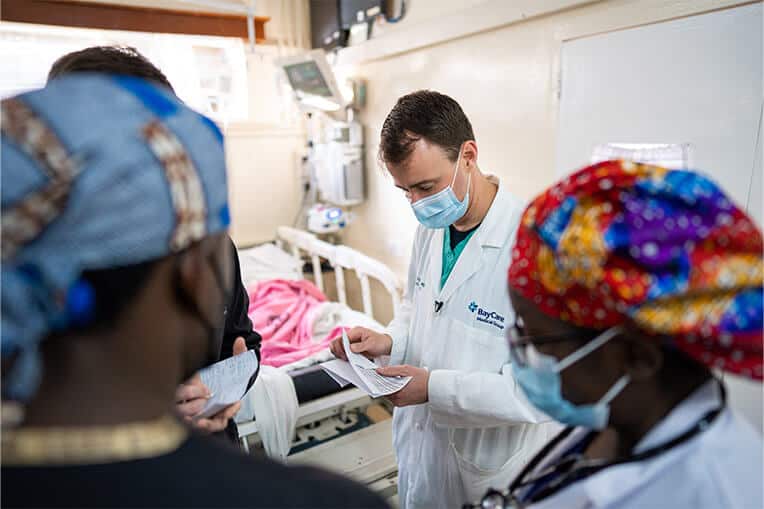 Missions is a priority for their family and “we hope we have modeled that for our girls,” Krista said. “Hopefully they have seen…that we are just being obedient and following the Lord.”

The Fitzwaters will continue following the Lord to Tenwek for as long as He calls them there. After years of trips, they have established deep roots in the community and have developed life-long friendships that are rekindled each visit. Whether through John’s medical practice or the work of Krista and the girls in the community, there are always plenty of ministry opportunities waiting for them.

“We have seen the real benefit of a long-term commitment to short-term trips,” John said. “Doing this kind of short-term work over a long period of time really establishes you with the local people. They see that you’re committed to who they are.”

John says these short-term medical mission trips have had a big effect on him as well.

“The primary thing these trips do for me, and I think this is needed for us often as medical professionals, is that they continue to humble me to recognize that God is in control,” he said. “He is sovereign over the work that we do, and He is sovereign over people. Often as doctors we feel like we have control, and these trips remind me that we don’t. And that point of dependency upon the Lord is where I would love to remain the rest of my life.”