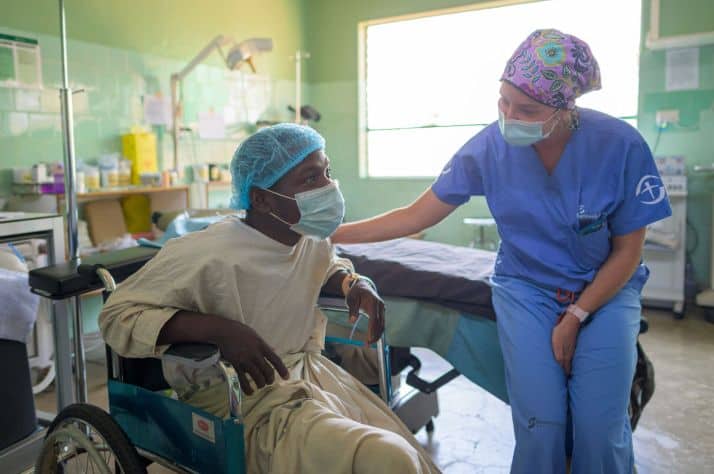 Henry had supported his family for years by relying on the steady, rhythmic swinging of his hammer. Back and forth, up and down, the metalsmith swung the hammer and fashioned items to sell at the market near his village in Malawi. 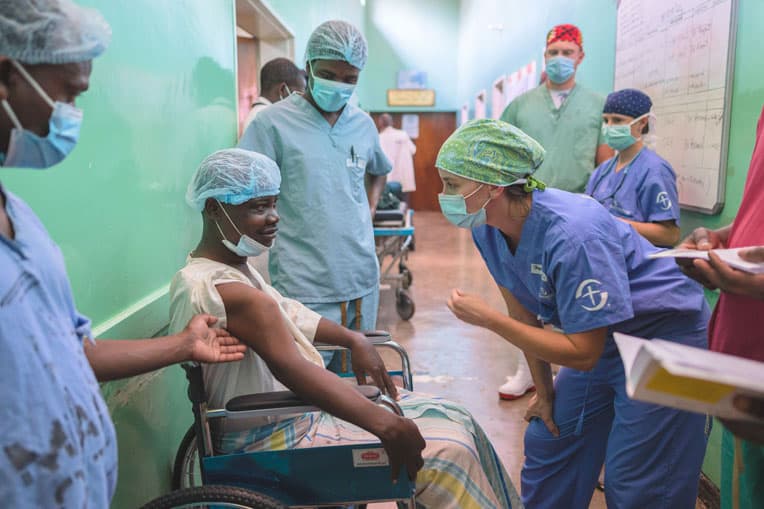 Henry is among the 23 patients cared for by our team during their week in Malawi.

The only livelihood he’d ever known was snatched away the moment a car hit him while he was walking home from work one evening. Henry spent two weeks in a hospital only to be sent home with an unrepaired, fractured humerus (upper arm bone) because the orthopedic surgery he needed was not available.

That was 18 agonizing months ago and his afflictions have been relentless ever since. “There’s still pain inside the bone,” Henry said. “This has been so hard.”

Losing his job meant Henry had a difficult time meeting the critical needs of his four children, including food, clothing, and school fees. “Their quality of life has decreased,” Henry said. “They’re struggling with so many things.”

Henry is grateful to the friends who stepped up to help the family as best they could, providing the needed funds for his children to stay in school. He also received many prayers from his church. “Though we are struggling, you can see the hands of God. The church has been encouraging me to never lose hope. One day, God will do wonders.” 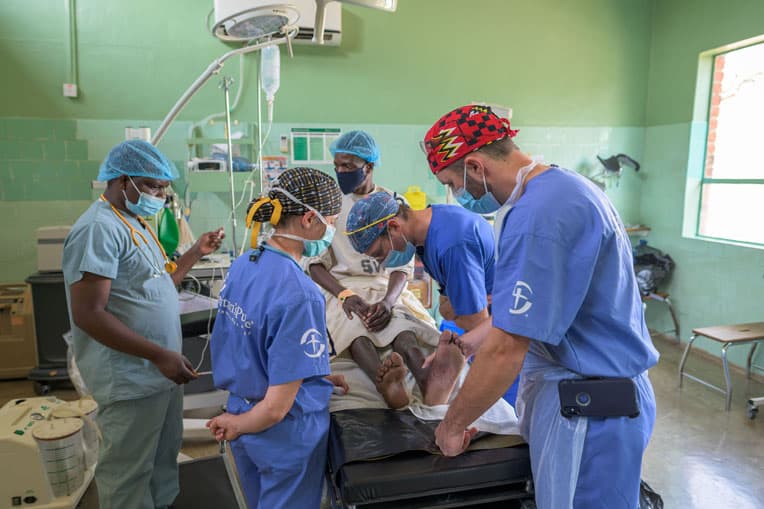 Henry knew God was at work when he heard about a World Medical Mission orthopedic surgery team that Samaritan’s Purse was sending to Nkhoma Hospital in Malawi. “They did a good job and I’m very happy. Thank you so much,” he said after surgery to fix his arm.

Henry was among the 23 patients who received orthopedic care during the week our team was in Malawi. Nearly all of the cases our team treated proved challenging and time intensive due to how long people have been suffering with these bone injuries or infections.

“The lack of orthopedic surgeons and equipment in the country has made everything we’ve seen more difficult,” said Dr. Dylan Nugent, lead orthopedic surgeon on the team. “The amount of cases they’re able to take care of…is minimal compared to the overwhelming volume.”

Dr. Nugent is a surgeon in Missouri and also a former World Medical Mission Post-Resident who served in Kenya. He came to Malawi to offer hope in Jesus’ Name and to be obedient to God’s calling on his life to serve in medical missions.

Dr. Nugent demonstrated God’s love to Henry by providing the critical surgery that he had long awaited. “That’s where Jesus started—reaching into people’s lives physically,” he said. “We’re just a tool to open doors for the Gospel.”

The Future Is at Stake

Shakira’s 20-minute walk to school had always been quite ordinary until it gradually turned into a threatening obstacle poised to wreck her entire future.

The walk from home to school and back again became a labored one for 11-year-old Shakira as the bone infection in her left leg worsened. Eventually the pain was so severe that Shakira was unable to walk, meaning she had no way to get to school. 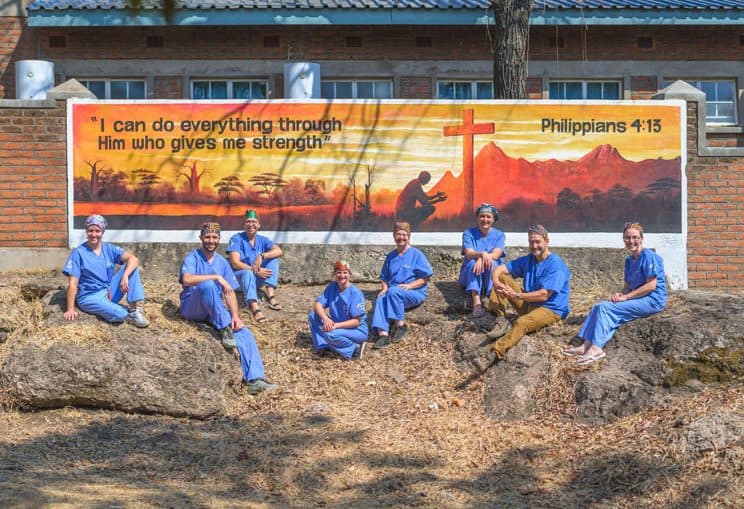 We are thankful for the orthopedic team that graciously gave their time to serve patients in desperate need in Malawi.

After about a year of staying home, and desperately wanting to return to school, Shakira bravely decided to give the 20-minute walk another try.

She only attended school for a few weeks before the pain in her leg and knee was insufferable and she found herself, once again, homebound. The family realized that unless Shakira was healed, school would never be possible. And, without an education, any thoughts of a better life would disappear.

Marko found himself in a similar situation. His father, Fimba, thought his son would also lose his opportunity for an education after he injured his arm when he fell off his bicycle.

“Marko went to school and played and did everything,” Fimba said. “Now, he doesn’t go to school. His arm is too painful. It was painful for me to watch as a father.”

Fimba is a poor farmer struggling to support his wife and four children. He would have been unable to make the four-hour drive to Nkhoma for his son’s surgery had his brother not offered to bring them.

The Samaritan’s Purse team provided both Marko and Shakira the surgeries needed to set them on the path toward healing. And with that physical healing comes a return to school and hopes for brighter futures.

Moise fled to Malawi to escape the continued fighting and instability that hovered over life in his home country. He joined his sister and brother-in-law, Dennis, in a refugee camp. Although the immediate threat against their lives diminished, they haven’t been freed from the day-to-day hardships inside the refugee camp. 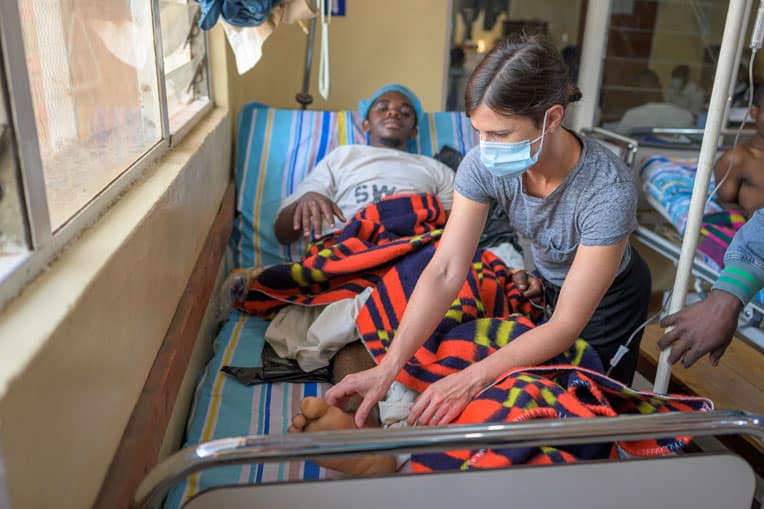 Dr. Julia Bedard checks on Moise the morning after his surgery.

“We don’t wish for this life,” Dennis said. “We are always hustling to get something to put in our mouths.”

On top of that, Moise, 18, lives with a deformed femoral head (upper thigh), making any kind of movement quite difficult. He still remembers growing up and trying to play games with other children, but being unable to keep up. “I cannot run or walk fast. I have to use the crutches,” he said.

Moise had no idea how, or if, surgery would ever be possible, and was thrilled to learn that our orthopedic team could perform the necessary procedure. He recovered well and soon saw improvement. “The leg is great by the grace of God,” he said.

Moise is hopeful that he can one day share with others the same grace and healing he received. “I’ve always dreamed of becoming a doctor. My passion is to help other people with problems like me.”