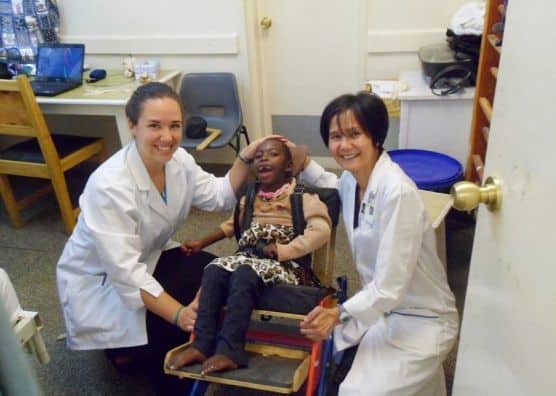 Betty Cheung, a Canadian physiotherapist and World Medical Mission volunteer, shares how a girl with cerebral palsy was helped at Tenwek Hospital in Kenya.

One of the outpatients that arrived in the clinic was Diana, a little girl with cerebral palsy. Mom swaddled eight-year-old Diana in a cloth since her daughter is very small for her age. She probably weighs less than 30 pounds. Apparently they came by a ‘piki piki’-one of those small motorcycles that transport people from their villages to Tenwek.

Diana has poor head and trunk control. She cannot roll from her stomach to her back, and she cannot sit up on her own. She has no speech. Her arms and legs cannot perform functional movement since they are spastic and tight. 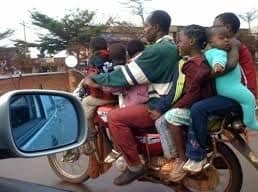 Diana, who suffers from cerebral palsy, rode a motorcycle like this called a ‘piki-piki’ to Tenwek Hospital in Kenya.

As physiotherapists we try to exercise, stretch, and position Diana so that she can see and interact with her surroundings. It is very difficult when you cannot sit up or even hold your head properly to look at what is happening around you.

The local physiotherapist, Solomon, brought out a special wheelchair for Diana to try, a local product made in Kenya’s capital city Nairobi. We adjusted the seat so that Diana can sit with proper support and therefore reduce the spastic tone in her arms and legs. When sitting in the chair, Diana is able to observe what is happening around her.

Initially mom was very quiet throughout the whole process, and she only broke out in a smile when she saw how Diana was able to sit up without anyone holding her. 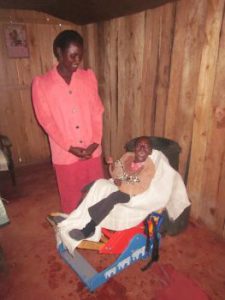 With her special chair, Diana can now look at the world around her instead of only the ceiling.

The wheelchair cost about $200. There’s no way Diana’s mother could have afforded it. And even if she could, there was no way she’d be able to transport it to their home. But Solomon, our wise local physiotherapist, happened to obtain a car one month ago and offered to take the family and the chair to Diana’s home.

We brought everyone back to her hut. Diana was sitting in the middle of the room in her brand new chair. Mom now has a choice of leaving Diana sitting up instead of looking up at a blank ceiling all day long. Also, Diana’s mother is able to work on the farm more efficiently without having to carry her daughter everywhere.

We pray and thank God for a new start for this family!