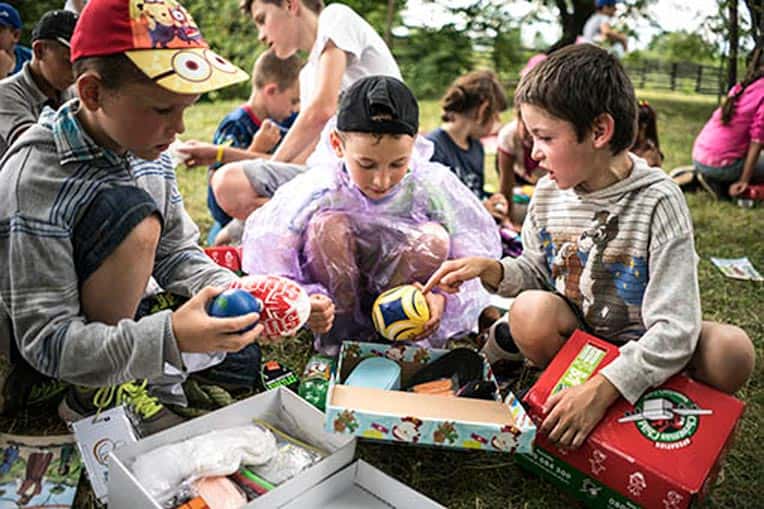 Three campers show off their shoebox gifts to one another in Zarichia.

The beautiful Ivano-Frankivsk region of western Ukraine was ruled by Poland, Austria, Poland again, and then the Soviet Union before becoming part of an independent nation. Here in this region and throughout the rest of Ukraine, another change is now underway—not a political one but a spiritual one.

Local Christian leaders are using Operation Christmas Child and The Greatest Journey to reach young people for Christ, spurring transformation that will spread across the land.

There’s good news coming from Golden Generation Camp, which sits in the foothills of the Carpathian Mountains. The facility houses 100 underprivileged children—prioritizing orphans and those separated from their families by the courts—and 20 staff every week throughout the summer. Campers come from 20 to 700 miles away to study the Bible and participate in 15 different activities. 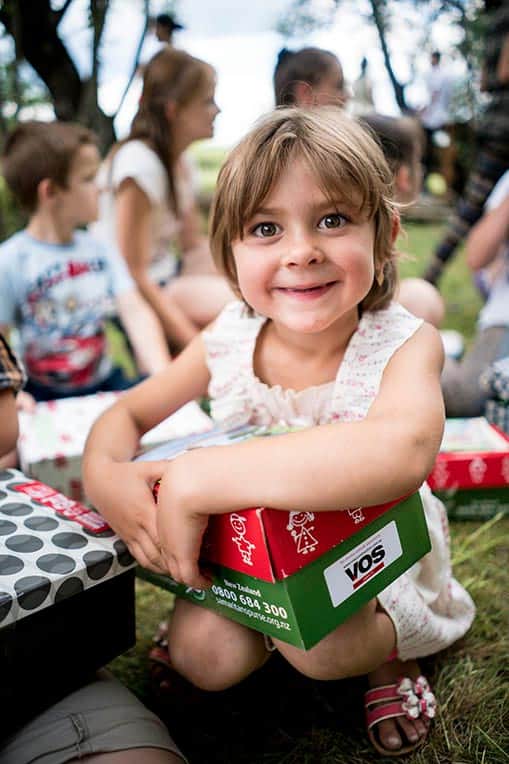 Myroslava, 5, is excited to receive her shoebox gift!

Children gathered on an island in the middle of a stream for a special Gospel presentation last summer. Leaders used posters of images in the Samaritan’s Purse Ministry Partner Guide to engage the boys and girls in Bible stories. Many children prayed to receive Christ at the end of the presentation.

Next, as Operation Christmas Child shoebox gifts and The Greatest Gift Gospel booklets were distributed, the children grew so excited they found it difficult to stay seated. Among the items in the box delivered to Nadia, 12, were a coloring book, stuffed animal, and picture of a class of 8-year-olds in Australia who sent the box. She said, “Today I learned that Jesus is the Son of God who came to the earth to save us. I am now a sinner saved by God.”

When asked what she would say to those who pack shoeboxes, Hanna Popidokha, the camp director, said, “I would kiss them first! I do not have the words to express my thanks to Samaritan’s Purse for these gifts.”

Later that afternoon, at the same camp, a group of 11- to 12-year-old children gathered next to a pavilion for The Greatest Journey discipleship program. 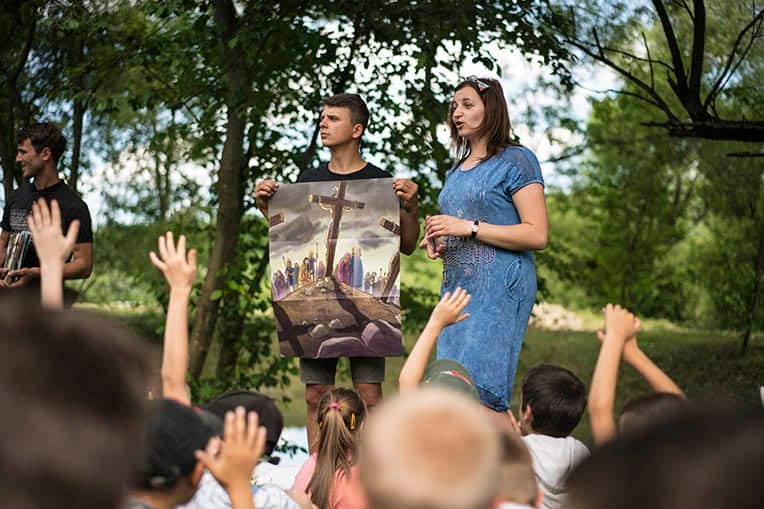 Natalya Bernik shares the Gospel with the children at Golden Generation Camp using posters from the Ministry Partner Guide before the children receive their gifts.

Amid the smell of freshly cut grass, roughly 20 underprivileged children and church kids (invited to be a positive influence on the others) watched their teacher do several object lessons to illustrate that Christ’s blood takes away our sins.

Diana, 11, a participant in the class, said, “Jesus is living in my heart. If I didn’t ask Him to forgive me, I wouldn’t be saved. I will tell people who don’t believe in God what I learned today.”

Her teacher and a regional coordinator for The Greatest Journey, Natalya Bernik, expresses her appreciation to all who invest in the 12-lesson program: “You also participate with us in God’s harvest. When you get to heaven, you’ll see all the good works you’ve done.”

Nearly four hours to the north outside the tourist city of Lviv, a church of 180 in the town of Sokal offers a day camp for children in their community. The camp runs for three days and bases their program on The Greatest Journey discipleship course developed for Operation Christmas Child shoebox recipients. 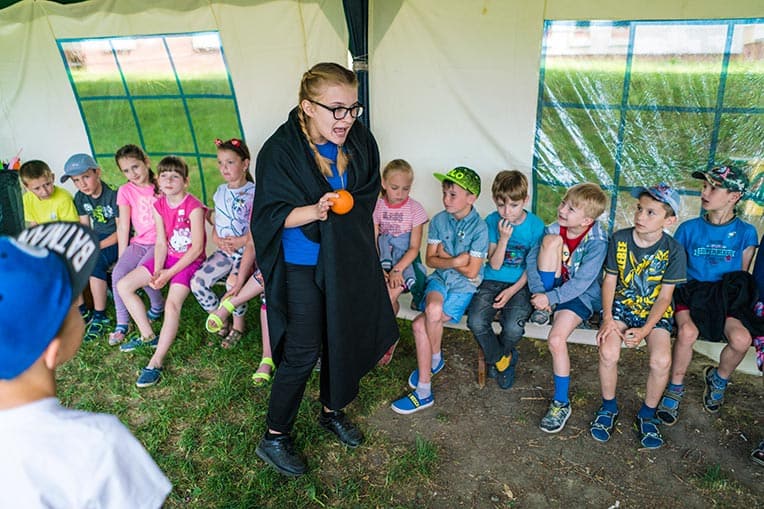 Kristina Hryniuk portrays the temptation of Adam and Eve for her class of 8- and 9-year-olds at The Greatest Journey camp.

Sophia Bihun, the camp’s leader, said, “Thanks to The Greatest Journey we have the opportunity to spread the kingdom of God all over!”

The line of children wanting to participate formed at 7:30 a.m. every day last summer. By the time camp started at 10:00 a.m., the camp reached their capacity of 300 children and had to turn some away. All the campers came from unbelieving families.

After children gathered in a large tent for a combined Bible lesson, they dispersed to six smaller tents by ages. In the 8- to 9-year-old tent, a group of 20 listened as their teacher Kristina Hryniuk dramatically told them the story of Adam and Eve. After the children answered questions about the story, a few were chosen to act out the story. 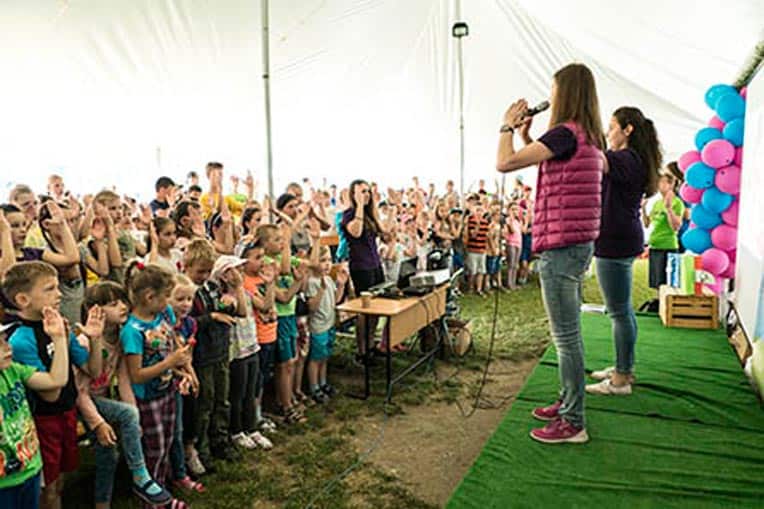 Sophia said, “The Greatest Journey is good for unbelievers because it covers ‘Who is God?’ and the origin of sin.”

After teaching the first three lessons of The Greatest Journey at camp, they invited the children to continue the course by attending a club sponsored by the church. This is an easy next step for the children before they feel comfortable coming to church.

Oleksii Fedchenko, part of the National Leadership Team for Operation Christmas Child in Ukraine, believes starting The Greatest Journey at Bible camps and then continuing its use in the local church will prove effective.

He thanks those who provide resources for the course. “I believe this won’t simply help us minister to children, but also influence the country.”