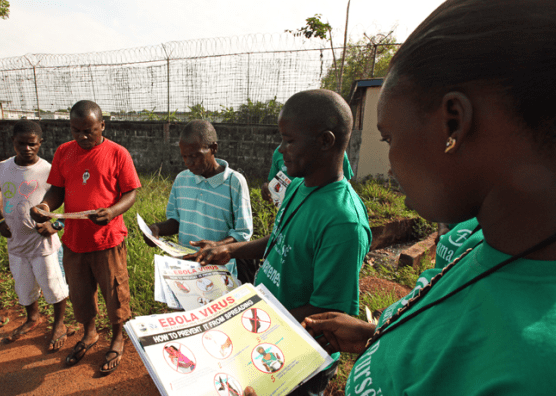 Our organization was acknowledged for its fight against Ebola.

August, 2015—People walked the streets with joyful hearts, showed off new clothes, shared meals with their families, and enjoyed a day off work. It was July 26, 2015—independence day in Liberia. This year, the festivities seemed elevated, as Liberians also celebrated the end of the Ebola Virus Disease that reached unprecedented levels in the country, accounting for 4,800 of the estimated 11,000 deaths in West Africa. 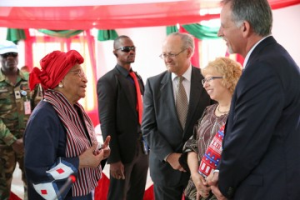 David and Nancy Writebol and Dr. John Fankauser meet the President of Liberia, Ellen Johnson Sirleaf, at the July 26 celebration. Dr. Fankauser received the Order of the Star of Africa award on behalf of Dr. Kent Brantly.

As a part of this annual celebration, national awards are given to individuals and organizations for their service to Liberia. The recipients of the awards this year were those who joined the fight against Ebola, risking their lives for the sake of others. Samaritan’s Purse was the only international organization to receive the Global Image award and the Officer grade of the Order of the Star of Africa award, which included an invitation to the Presidential Independence Day Celebration.

“We felt very honored to receive the award,” said Bev Kauffeldt, the Samaritan’s Purse assistant senior programs manager in Liberia. “It was nice to be recognized for all the hard work our staff have done over the past year fighting Ebola.”

For his service as a medical doctor and a humanitarian, Dr. Kent Brantly was one of 13 individuals to be awarded the Grand Commander grade of the Order of the Star of Africa. Dr. Brantly, a Samaritan’s Purse Post-Resident Physician at the time, worked around the clock to help patients overcome Ebola, and he is one of the few expatriates who contracted and was healed from the deadly disease.

The past year and a half has been a struggle for both the people of Liberia and the Samaritan’s Purse field staff.

“It was a great encouragement to our staff,” said Kendell Kauffeldt, Samaritan’s Purse Liberia Country Director. “We were able to share the awards with them during our morning devotional time. It was a very emotional time for all of our staff as they remembered the dark days of fighting Ebola.”

Samaritan’s Purse continues to work in Liberia to assist Ebola survivors through psychosocial counseling and health visitations, post-Ebola recovery, health programming, and overseeing the Foya Transit Center. We remain ready to respond and support the Ministry of Health if needed.

“Please pray for our staff as they go out to start implementing post-Ebola recovery programs,”  said Bev Kauffeldt. “They will be in many communities that were hit hard by Ebola. Pray for their safety and that God would use them to help [the community] heal.”