Samaritan's Purse provided help and hope to those affected by the wildfires in Fort McMurray.

Residents of Fort McMurray, Alberta were forced out of their homes on May 3, 2016 as the entire city was evacuated due to a massive wildfire. The blaze caused massive destruction, with over 2,400 buildings destroyed. Samaritan’s Purse mobilized staff and volunteers to serve those affected. 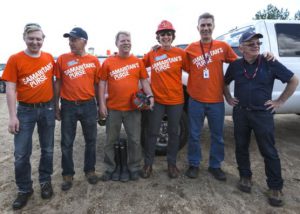 Samaritan’s Purse’s easy-to-spot volunteers were on the ground in Fort McMurray after the evacuation order was lifted on June 1. They helped returning residents with a variety of cleanup tasks, while sharing the love of Jesus.

The evacuation order was lifted June 1, after which  our responders flooded “Fort Mac.”  We set up at a local church and worked with pastors, their congregations, and other residents who wanted to be involved in the clean-up and restoration of the city.

Thanks to donations from Canadians like you, 14 staff and two specially equipped Disaster Relief Units (transport trucks filled with a wide variety of emergency equipment including electrical generators, power tools, wheelbarrows, shovels, and personal protective equipment) were present in the city . We also had  eight pick-up trucks, bobcats, a mobile warehouse of tools, and a shower unit to enable staff and volunteers to clean up after long days of dirty, tiring work.

We  helped  returning residents in many ways. For residents whose homes burned down completely, our responders donned protective gear and entered the property in search of salvageable items. Some homes were unscathed by the flames, but needed to have contaminated fridges removed. Regardless of our acts of service, we came not just to help with tasks, but to share the love of Jesus.